Gliosarcoma is a rare variant of Glioblastoma Multiforme (GBM). It is a very aggressive tumour and usually managed like GBM. Treatment of choice is surgery with good surgical margins followed by radiotherapy (60 Gy). Median survival is seven months. Here we present a case report of 55 years old male who was diagnosed as brain tumour in left temporoparietal region. It turned out to be gliosarcoma after surgical resection and histopathological evaluation.

Gliosarcoma is a rare variant of Glioblastoma Multiforme (GBM). It contains both glial and sarcomatous component. Epidemiology and natural history of this tumour is ill defined. It usually affects 5th and 6th decade of life with slight male preponderance.1 Surveillance, Epidemiology and End Results (SEER) database reveals only 2.2% of gliosarcoma out of 16,388 patients identified with either gliosarcoma or GBM from 1988-2004. Most of them had involvement of temporal lobe.2 Exact cause is unknown but may be radiaton induced. Mean survival is 13 months (6.9-19.4 months).3 It has a propensity for distant metastasis and usual site of involvement is lung followed by liver and bone.4 Here we present a case report of 55 years old male who presented with space occupying lesion (SOL) in brain which turned out to be Gliosarcoma after surgical resection and histopathological evaluation.

Fifty five years old male resident of Nawabshah was normotensive and normoglycemic. He presented with history of headache more on left side, dysarthria, vomiting and right sided hemiparesis for the last five months. It was not associated with any history of fits, visual disturbances, fever or loss of consciousness. He consulted a physician is his hometown who advised a CT scan brain. CT brain was done on January 22, 2009. It revealed a mass having mixed cystic and solid component in left temporoparietal region (Figure-1). 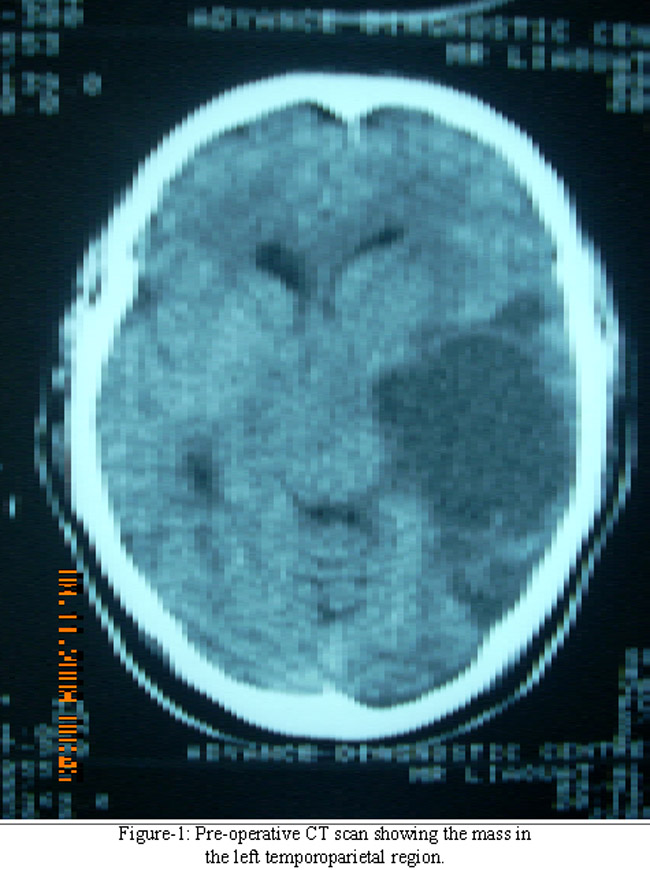 He was referred to a neurosurgeon who performed a craniotomy and drained the cystic fluid. Unfortunately, histopathological examination was not done. Patient remained stable for two months after surgery without any adjuvant treatment. Immediate postoperative MRI was also not done. His symptoms improved significantly after surgery. However, he developed same headache and dysarthria after two months of surgery. Again CT scan brain was advised in March 2009 which revealed a recurrent/residual mass in the same region. The second surgery was performed on May 19, 2009. Histopathology revealed Gliosarcoma. Immunohistochemistry showed positive staining for Glial Fibrillary Acid Protein (GFAP) and Vimentin. After this second surgery, he was referred to our hospital for further management. Here he was thoroughly evaluated for any distant metastases and fresh MRI was advised to rule out any residual disease. Unfortunately, he was still having a residual mass in the same left temporoparietal region (Figure-2). 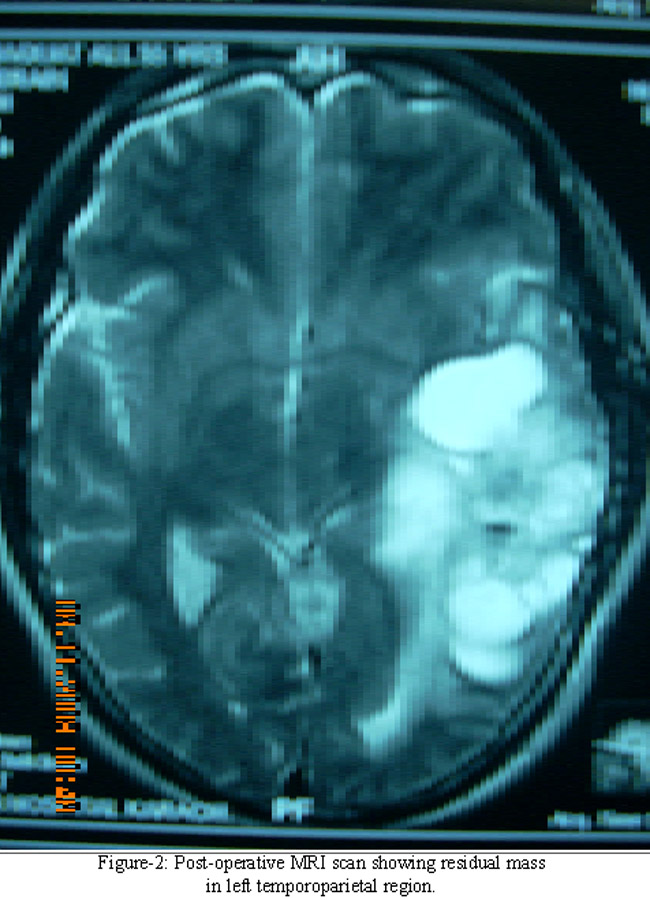 There were no distant metastases. Patient’s general condition was stable. He was fully conscious and well oriented to time and space. ECOG (Eastern Cooperative Oncology Group) performance status was one. His craniotomy scar mark was healed and vision was normal. We planned for concurrent chemoradiation with Temozolomide but due to financial problem, he refused Temozolomide. Therefore, he was planned for radiation alone. He received 60 Gy in 30 fractions with 3D conformal technique over a period of 40 days along with steroids. He completed his course of radiotherapy successfully and remained symptoms free for three months. He then developed right sided hemiparesis, headache, vomiting and loss of consciousness. His general condition deteriorated rapidly, and was shifted to tertiary care hospital where supportive treatment was started. He remained on supportive treatment for two weeks and expired within nine months of diagnosis.

Gliosarcoma is a rare brain tumour and represents 2% of GBM. It is usually diagnosed and treated like GBM. Single institutional data from Germany published in 2009 revealed only 16 patients treated over a period of 10 years (1997-2006).5 Another audit from an institute of India published in 2008 presents only 24 patients of gliosarcoma as compared to 251 cases of GBM treated over a period of 15 years (1990-2004).6 Local data revealed 16 cases of gliosarcoma reported from pathology department of Aga Khan University hospital in 2004.7 Recently another case has been reported in local journal of Pakistan.8 There are fewer than 20 reported cases of extracranial metastases of gliosarcoma with majority of them reflecting a tendency for haematogenous dissemination.

Emergency airway management of a patient with tracheal stenosis