Involvement of the central nervous system by multiple myeloma (MM) is considered to be extremely rare. Magnetic Resonauce Imaging (MRI) is the imaging modality of choice to detect and differentiate myeloma at unusual sites. We present the case of a sixty year old man who was a known case of MM. In this case report MRI findings of central nervous system in myeloma lesions are reported. The purpose is to increase the awareness of the clinical presentation, neuro-radiological findings and follow-up of multiple myeloma with intracranial growth. There are only a few reported cases found concerning MM with intracranial involvement in the literature. To the best of our knowledge, there is no such published literature available locally.

Multiple myeloma is a disease characterized by proliferation of malignant plasma cells and a subsequent overabundance of monoclonal paraprotein.1 Multiple myeloma (MM) accounts for 1% of all malignant diseases and represents about 10% of all haematological malignancies.2 Male to female ratio is 1.4:1. The majority of patients are older than 65 years.3 The cause of multiple myeloma is unknown2. The predominant sites of involvement are vertebral column, ribs, skull, pelvis and femora. Extra osseous myeloma deposits are occasionally found, in the lungs, nasopharynx or paranasal sinuses.3 Most common clinical features of MM are osteolytic lesions, bleeding, anaemia, renal insufficiency, pathologic fractures, spinal cord compression and recurrent bacterial infections.4 Intracranial structures are rarely involved by multiple myeloma.5 The median interval from diagnosis of MM to the documentation of CNS involvement is reported to be around 8.5 months.6 The most common presenting symptoms in case of intracranial involvement include extremity weakness, change of mental status, and cranial nerve palsies. The prognosis is poor; with the median overall survival from the time of diagnosis of CNS involvement is only 1.5 months.6

A 60 years old male patient was admitted with shortness of breath, altered mental status and drowsiness for three days. His symptoms had started one year back. Detailed work-up was done and he was diagnosed as Multiple Myeloma IgM type with extensive bony involvement. He underwent multiple sessions of plasmaphresis and was put on chemotherapy. 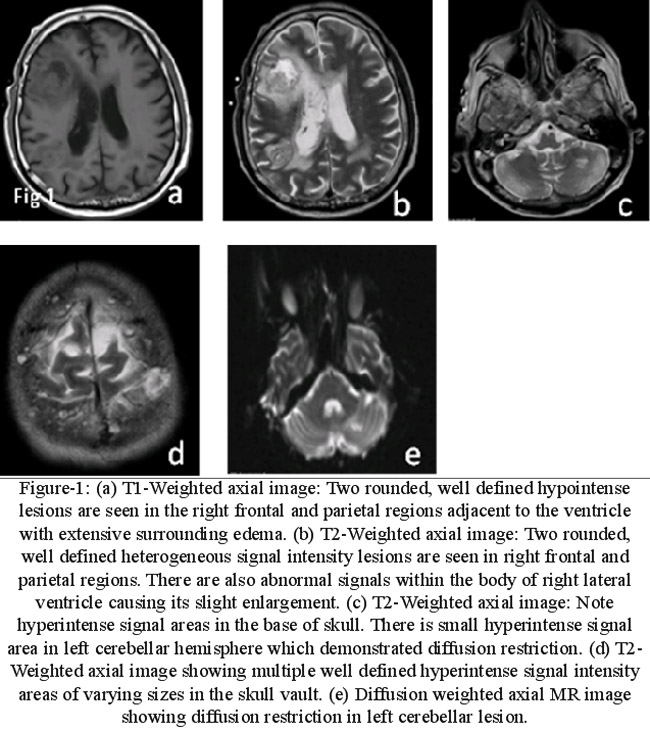 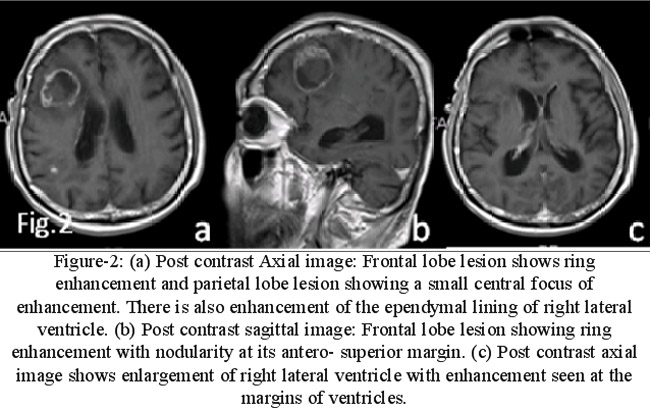 MRI on readmission revealed multiple abnormal hyperintense T2 signal areas in the base of the skull and skull vault. Abnormal signals were also identified in the left cerebellar hemisphere showing diffusion restriction on diffusion weighted images. Hyperintense signals were identified in the region of the left posterior cerebral artery territory which showed post contrast enhancement. Further evidence of abnormal signals was seen within right ventricle associated with its mild enlargement and post contrast enhancement. Post contrast enhancement was also identified at the left lateral ventricle, third and fourth ventricle and suggestive of ependymal disease. However, no evidence of pachymeningeal or leptomeningeal disease was present. There was further evidence of two rounded, well defined lesions, in frontal and parietal lobes adjacent to the right lateral ventricle which appear to be heterogeneous on T2 weighted images with significant surrounding oedema particularly in the region of frontal lobe. On post contrast images the lesion in the frontal lobe showed ring enhancement with some evidence of nodularity at its anterior margin. The lesion in the parietal lobe showed only a small central focus of enhancement. All these findings represented metastatic deposits of the multiple myeloma. These appeared to be in close proximity and a possible continuation of abnormal signals in the ventricular system suggestive of subarachnoid spread of the disease.
Patient died after two days of admission.

Multiple Myeloma is a diffuse disease of the bone marrow. Almost 90% of patients with myeloma have osseous involvement. Although any bone can be affected, predominant sites of involvement are vertebral column, ribs, skull, pelvis and femora. Extraosseous myeloma deposits are occasionally found, most commonly in the lungs, nasopharynx or paranasal sinuses.3 Intracranial involvement is rare, most frequently resulting from osseous lesions in the cranial vault, skull base, and nose or paranasal sinuses.7
Patient usually presents with skeletal pain, osteolytic lesions, bleeding, anaemia, renal insufficiency, pathologic fractures, spinal cord compression and recurrent bacterial infections.4 Intracranial extension of the tumour may give rise to papilloedema, extremity weakness, change of mental status, and cranial nerve palsies.6
Four distinct radiographic patterns of involvement are seen, including the solitary lesion (plasmacytoma), diffuse skeletal involvement (myelomatosis), diffuse skeletal osteopenia and sclerosing myeloma.8
Imaging studies in the workup of patients with MM include radiographic skeletal surveys, CT, Nuclear medicine bone scanning. MR imaging of bone marrow has allowed a direct look at the actual tumour burden within the bone marrow. More recently positron emission tomography (PET) with fluorodeoxyglucose (FDG) has been used.2
Skeletal radiography continues to be the primary diagnostic study to aid in the detection of destructive bone changes in MM. Estimates suggests that approximately 50% of bone destruction must occur before there is radiographic demonstration of the abnormality and that 75% of patients with MM have positive radiographic findings.2
MR imaging findings in MM closely reflect the broad spectrum of pathologic tumour spread. This modality can be used to determine the exact location, size and local compressive effects of the disease and possible associated fractures. MRI imaging of brain is performed to examine diploic involvement of the calvarium and skull base. It is also helpful in precisely defining radiation therapy ports. Post treatment MR images helps in defining response to treatment. An additional use of MR imaging is the delineation of the effect and complications of the highly involved therapeutic protocols.2
Multiple sequences have been proposed for use in identifying focal or diffuse disease. These include spin echo (T1-Weighted and T2-Weighted), Gradient echo (T2* Weighted), STIR (Short T1 inversion recovery), and contrast material-enhanced spin echo (with and without fat suppression) sequences.9 Intracranial involvement is rare, primary dural or leptomeningeal involvement is rarer.7 It is most frequently the result of contiguous spread from osseous lesions. Infiltration of the duramater is likely to have been caused by spread from contiguous bone lesions, whereas involvement of the leptomeninges probably occurs by the haematogenous route. Leptomeningeal involvement is associated with a very poor prognosis; however, patients with dural involvement show a more favourable response to combined chemoradiotherapy.10 In our case lesions were seen in skull vault as well as adjacent frontal lobe. There was also involvement of the ependymal lining of the ventricles.
The neuroradiological findings are no different from meningioma, metastasis, lymphoma, dural sarcoma, plasma cell granuloma, infectious meningitis and leptomeningeal carcinomatosis. Intracranial involvement from multiple myeloma must be taken into account in the differential diagnosis of cranial osseous and meningeal diseases.7

Emergency airway management of a patient with tracheal stenosis