Anaemia is defined as blood haemoglobin (Hb) level below the normal range for age and gender. In adults cut-off Hb level for anaemia is Hb <13 g/dl in males and Hb <11.5 g/dl in females.1 Severe anaemia is defined as Hb <7 g/dl.2 Anaemia in hospitalized patients is very common and affects 30-90% of patients.3 Anaemia of chronic disease is the principal cause of anaemia in this group while iron deficiency is the major cause of anaemia worldwide.1
Assessment of pallor for anaemia is an important part of general physical examination of every patient. To detect anaemia, pallor at sites where capillaries are superficial is looked for. The usual sites are lower eyelid conjunctiva, nailbed, and palm.4 Clinicians usually assess pallor at these sites for screening and later advice blood haemoglobin levels if pallor is found at one of these sites. Since these signs can be detected with little experience and at no cost, therefore, they are valuable in poor areas where facilities for haemoglobin estimation are not available.
Many health-care-workers and medical students do not know the diagnostic value of pallor for detecting anaemia. Medical students usually label a patient anaemic if they find pallor; this is largely because of much emphasis laid on pallor during ward rounds and clinical teaching. Conditions like hypotension, and hypothyroidism, etc., also produce pallor at these traditional sites.5
Many studies have been done to evaluate the diagnostic accuracy of these clinical signs of anaemia. Most are done on children in developing countries where anaemia in children is a common disorder.6-10 A meta-analysis of 11 such studies11 found that pallor of the palm is the most accurate sign of severe anaemia in children, followed by nail-bed pallor. Studies done on adults (>12 years old) differ in what is the most accurate pallor site for anaemia. In different studies the most accurate sites for ruling in severe anaemia (Hb <7 g/dl) were conjunctiva;2 tongue,12 and palm.13 Moreover any of these sites was neither sensitive nor specific for mild anaemia (Hb <12 g/dl).2,12,14,15
The objectives of our study were to assess the diagnostic accuracy of pallor for detecting mild and severe anaemia in hospitalized patients, to compare the accuracy of different pallor sites with one another, and to measure the inter-observer agreement in interpreting pallor.

A cross-sectional analytical study was undertaken, where 305 consecutive patients, above 12 years of age, admitted in the medical and surgical wards of the Mayo Hospital in August, 2009, were included through convenience sampling.
Patients in intensive care unit, those who received blood transfusion or lost blood during the days between interview and haemoglobin estimation, and those with already known haemoglobin levels were not included in the study.
Test variables were pallor of the lower eyelid conjunctiva, pallor of palm and nailbed pallor. Conjunctiva was considered pale if the colour of the anterior rim was same as that of the posterior pale rim. Palmer pallor was assessed by comparing the colour of palmer creases with that of adjacent skin. We labeled the palm pale when palmer creases had the same colour as that of adjacent skin. Nailbed pallor was assessed by pressing the nail and noting the colour of nailbed after releasing digital pressure.
The reference variable was haemoglobin concentration in blood which was noted from the investigation chart of the patient. It is usual practice in our hospital to send baseline investigations at the time of admission and the results are received next day. The hospital laboratory measures haemoglobin concentration by an electronic cell counter.
Structured questionnaire was used for data collection and after taking verbal consent, patients were interviewed at bedside. Data included demographic characteristics like name, age, gender and residence. Examination of the nailbed, palm, and conjunctiva was performed. For each site pallor was recorded as present or absent. The observer recorded the blood haemoglobin level and the admitting diagnosis from the investigation chart of the patient. The observer made sure that haemoglobin was estimated within previous three days and the patient had not received blood transfusion or lost blood during these days.
Two observers interviewed and examined the patients. To measure inter-observer agreement, thirty seven patients were evaluated by both the observers. The rest of the patients were evaluated by either of the observers.
All analyses were done with Statistical Package for Social Sciences (SPSS) version 16 and Medcalc version 11.2. Two categories for pallor were coded: present and absent. Haemoglobin concentration was categorized to define mild and severe anaemia. Mild anaemia was defined as Hb <13 g/dl for males and Hb <11.5 g/dl for females. Severe anaemia was defined as Hb <7 g/dl both for males and females.
To assess accuracy of pallor for anaemia, likelihood ratios (LR) and their 95% confidence intervals (CI) were calculated. LR is the likelihood of test result in diseased person compared with its likelihood in a normal person.16 In our study test result was either pallor present or pallor absent. We calculated LR\'s, at each pallor site, for both the presence of (+LR) and absence of pallor (-LR). The value of LR ranged from 0 to infinity. High the LR for presence of a sign, more accurate is the sign in ruling in disease. Close to zero the LR for absence of a sign, more useful is the sign in ruling out disease. LR=1 had no diagnostic value.5
Accuracy of conjunctival, palmer, and nailbed pallor was compared by comparing the areas under their receiver operating characteristics (ROC) curves. Area under the curve (AUC) close to 1 indicated very useful test while AUC=0.5 indicated that the test is useless.16 ROC curve was obtained by plotting sensitivity on y-axis and 1-specificity on x-axis.
We created a new variable, \'pallor at any site\', which was coded as present if pallor was present at any of the three sites and absent if otherwise. LR\'s and AUC were also calculated for pallor at any site.
Kappa statistic was calculated to assess inter-observer agreement in interpreting pallor. The value of kappa ranged from 0 to 1. Value of 1 meant full agreement while value <0.2 indicated poor agreement.16
The study was approved by the institutional review board of King Edward Medical University, Lahore. We took informed consent from all patients before including them in the study.

Comparison of the AUC\'s for different pallor sites at haemoglobin cut-off 7g/dl showed that all sites were equally useful (AUC\'s=0.7-0.8) in detecting severe anaemia (Figure). 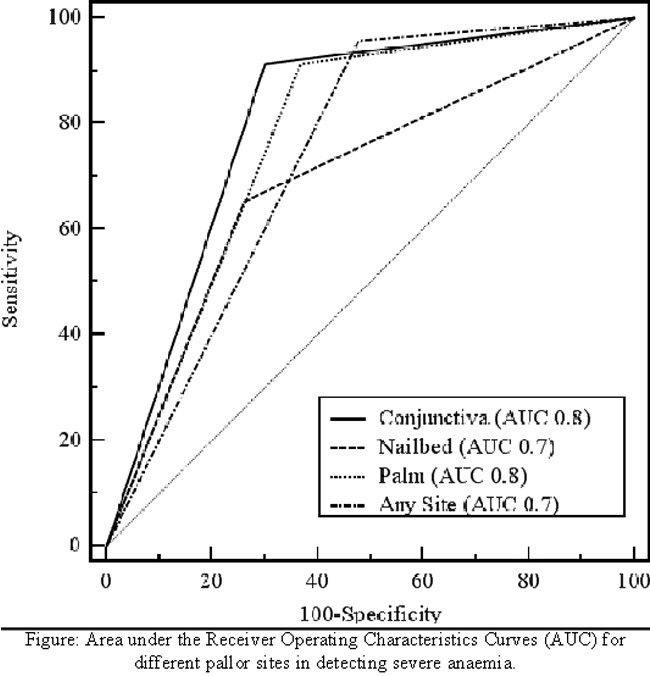 The inter-observer agreement for conjunctival pallor was good, for palmer pallor was moderate, and for nailbed pallor was fair (kappa values 0.77, 0.40 and 0.23 respectively).

The principal findings of our study were that presence of nailbed pallor has moderate accuracy for detecting mild anaemia while absence of pallor at nailbed, conjunctiva, and palm does not rule out mild anaemia. Pallor at all the sites has modest accuracy for detecting severe anaemia and absence of pallor at all sites except nailbed convincingly rules out severe anaemia. These results are consistent with previous studies2,12 which found that pallor has less accuracy at higher haemoglobin cut-off (mild anaemia) while it is more accurate for lower haemoglobin cut-off (severe anaemia).
Likelihood ratio was selected as a measure of accuracy of clinical signs. Most of the studies done on accuracy of pallor for anaemia have relied on sensitivity and specificity2,14,15,17 while few have calculated likelihood ratios.12,18 The advantage of likelihood ratio is twofold. First it provides the clinician with an estimate of confidence in possibility of disease when a particular sign is found during examination. Second it gives post-test probability of a disease when its pre-test probability is known (post-test odds= pre-test odds × LR, and probability=odds/1+odds).5
In our study pre-test probability of mild anaemia was 64.3% and nailbed pallor (LR=5.6) raised this probability to 91%. Therefore, finding nailbed pallor in a hospitalized patient should alert the clinician about presence of anaemia. Conjunctival pallor raised the probability of severe anaemia from 7% to 18%. This small change in post-test probability does not mean that conjunctival pallor is a useless sign. Change in probability depends on prevalence of the disease. Prevalence of severe anaemia in our population was only 7%. Even large LR  produces small change in probability when the disease is rare.5 Our results about accuracy of conjunctival pallor for severe anaemia (LR=3.0) are consistent with two previous studies with LR of 4.2 and 3,5,12,18
Absence of conjunctival and palmer pallor (LR=0.1 for both) confidently ruled out severe anaemia decreasing its probability from 7% to 0.7%. Similar result was obtained in a recent study which reported LR of zero for absence of conjunctival pallor.12 But another study yielded LR of 0.6 and concluded that absence of conjunctival pallor does not argue against severe anaemia.18 This may be explained by higher haemoglobin cut-off (Hb <9 g/dl) for defining severe anaemia in that study.
Some authorities have advocated assessing multiple sites and considering pallor at any of these sites as a positive test.2,13 But our results do not support this recommendation. We found that pallor at any site is no better than conjunctival and palmer pallor in ruling in or ruling out both mild and severe anaemia.
The inter-observer agreement was fair to good in our study which is consistent with most other studies.13,17,19
The strength of our study is that we recruited both medical and surgical in-patients having a wide variety of diagnoses, thus minimizing spectrum bias. We recruited consecutive patients thus minimizing selection bias. The limitation of our study is that we assessed two grades of pallor (present and absent) instead of three or four (severe, moderate, borderline, and absent). But using two grades for assessing pallor generated smaller confidence intervals for LR that would not have been possible if we had used more grades with present sample size.