Objective: To study the outcome of conventional scleral buckling procedures performed for primary rhegmatogenous retinal detachment.
Methods: This prospective study was conducted at Khyber Institute of Ophthalmic Medical Sciences, Hayatabad Medical Complex, Peshawar, Pakistan from 02-08-2008 to 29-04-2009. The outcome of fifty-six consecutive cases, operated in nine months duration, for primary rhegmatogenous retinal detachment using scleral buckling procedures, were analyzed prospectively. The main outcome measure was anatomically re-attached retina at two weeks postoperative follow-up.
Results: Overall success rate was 85.71% (48 of 56 cases) at 2-weeks post-operative follow-up. The most common intra-operative complication was sub-retinal haemorrhage (23.21% cases), and the most common complication at first post-operative day was increased intra-ocular pressure (IOP), ( 21.43% cases). The raised pressure was transient in most cases, and only 2 (3.57%) had elevated IOP at 2-weeks post-op follow-up. Choroidal detachment was the second commonest post-operative complication (10.7%) The un-aided visual acuity was PL or HM in 32 (57.14%) cases and better than 6/60 in 3 (5.36%) cases pre-operatively. This improved to PL/HM in 12 (21.43%) and better than 6/60 in 16 (28.57%) cases post-operatively. Not very significant improvement in vision despite flat retina was found to be due to late presentation of patients, high grade PVR (Grade-C) in 24 (42.86%) cases and pre-operative \'off\' macula in 52 (92.86%) cases, at a short-term follow up.
Conclusion: Scleral buckling procedures are still effective in the treatment of primary rhegmatogenous retinal detachment even in high-grade PVR cases. A fairly good success rate can be achieved by adopting the appropriate procedures (JPMA 60:754; 2010).

Detachment of the retina is a condition of the eye that can lead to complete blindness.1 According to an estimate there are 43 million blind people (vision less than 3/60 in the better eye) worldwide. Out of these, 90% are from the developing countries of Africa, Asia and Latin America.2
About 70% of global blindness is caused by cataract, trachoma and glaucoma. Retinal disease is a major cause of visual loss in developed countries. In developing countries it is given less importance and has a low priority, due to the lack of ophthalmic personnel and services.3
According to a survey, most of the developing countries are lacking the facilities for the modern surgical management of retinal diseases including retinal detachment. The level of training and equipment is also very low.4 Because of the limited resources and pressing problems of untreated cataract, glaucoma, trachoma and refractive errors, treatment of retinal detachment has a low priority.
The annual incidence of Rhegmatogenous Retinal Detachment is one case in 10,000 population. Thus assuming an average life expectancy of 70 years, the prevalence is approximately 0.7%.5 One recent study showed an incidence of about 18 cases per hundred thousand populations per year.6
Jules Gonin, in 1920, for the first time described scleral buckling procedures for the repair of retinal detachment by treating the causative retinal breaks. After Gonin, even though technology and equipments improved a lot, there is still overall primary failure rate of 15 - 20 % even in the best centers of the world.7-9
Although the success rate of re-attachment of retina is much higher with the modern techniques of pars plana vitrectomy and internal tamponades, conventional scleral buckling is still considered to be a safe and effective technique in the primary management of un-complicated rhegmatogenous retinal detachments.10-14
As retinal detachment is a challenge in Pakistan, this study was conducted prospectively to analyze the results of 69 consecutive cases operated for retinal re-attachment surgery using scleral buckling procedures. The main outcome measure was set as the anatomical re-attachment of retina at 2-weeks post-op follow-up visit.

The study was carried out at the department of clinical Ophthalmology, Khyber Institute of Ophthalmic Medical Sciences, Peshawar from 02-08-2008 till 30-04-2009. All the 69 consecutive cases (66 patients) with primary rhegmatogenous retinal detachment admitted in this period and operated with scleral buckling procedures alone (i.e. no vitrectomy), were selected for this study. Due approval for the study was obtained from the institutional research and ethical committee before commencing the study.
Inclusion criteria were patients presenting with rhegmatogenous retinal detachment, both operated under general or local anesthesia. Patients operated with Pars Plana Vitrectomy or Pneumatic retinopexy were excluded from the study. Eyes with PVR (Proliferative Vitreo Retinopathy) causing folded retina, with macular or more posterior breaks, giant retinal tears, and those with previously failed scleral buckling procedures were also excluded.
A specially designed Performa was used for the study analysis. A detailed history of every patient was recorded. All patients were examined with slit-lamp, 78D lens, three mirrors, and indirect ophthalmoscope. Extent of detachment, macular status, PVR grading, position and type of break(s), and any other note-worthy data like lens status, myopic fundal changes and peripheral retinal degenerations, were also entered in the performa. Proper retinal diagrams were drawn both pre- and post-operatively. Detailed data from operation notes was also entered in the Performa.
All RRD patients are programmed to post-operatively examination on 1st day, 2-weeks, 3-months, 6-months and then annually life-long. Details like visual acuity, intra-ocular pressure, anatomical status of the retina, buckle status, ridge, any post-op complication, and any additional procedure advised or done are routinely recorded at each follow-up visit. Anatomical re-attachment of the retina at 2-weeks post-op follow-up visit was considered as the main outcome measure. Different variables of the study were analyzed by means of SPSS software. 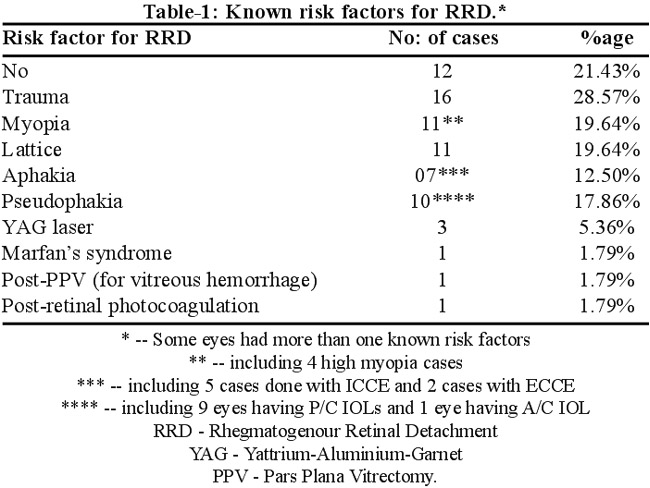 Sub-retinal fluid (SRF) drainage and retino-cryopexy was done in all (100%) cases. Anterior chamber paracentesis was performed in 15 (26.79%) cases. In 4 (7.14%) patients, extra-ocular muscles disinsertion (both inferior and lateral rectus in 2 cases each) was done to facilitate buckle application.
Amongst the intra-operative complications, sub-retinal haemorrhage occurred in 13 (23.21%) cases. Retinal perforation was observed at the drainage site in 2 (3.57%) cases, which was supported by encirclage. Intra-operative vitreous haemorrhage and choroidal haemorrage was encountered in 1 (1.79%) case each and disc haemorrhage was had in 2 (3.57%) cases.
At 1st post-op day, retina was found flat in 44 (78.57%) cases. Mean intra-ocular pressure was 17.27 ± 5.08 mmHg and range was 8 - 40 mm Hg. Increased intra-ocular pressure (above the upper normal limit of 21 mm Hg) was noted in 12 (21.43%) cases. These patients were treated with topical beta-blockers and/or oral acetazolamide. Choroidal detachment was noted in 6 (10.71%) cases on 1st post-operative day, including one who developed it intra-operatively, while 3 (5.36%) cases had vitreous haemorrhage with one case developing it during surgery.
On the 2-weeks post-operative follow-up visit, mean intra-ocular pressure was 14.82 ± 2.48 mmHg (range 9 - 24 mm Hg). Increased intra-ocular pressure was noted in only 2 (3.57%) cases. No pressure reducing medication was prescribed for them. Choroidal detachment was present in 1 (1.79%) case, vitreous haemorrhage in 3 (5.36%), and sub-retinal haemorrhage was observed in 12 (21.43%) cases. Laser photocoagulation was performed in 2 (3.57%) cases at 2-weeks post-op follow-up to prevent re-detachment. A significant improvement was noted in un-aided visual acuity (UAVA) recorded pre-operatively and post-operatively at both follow-ups (Table-3).

Scleral buckling procedures have been used as a treatment for primary RRD for about 70 years. These procedures are still effective and widely adopted even today and an overall success rate of 77 to 93% has been reported.1-3
Yorston D. and Jalali S. reported a success rate of 76.8% in India. They opined that success was less likely in eyes with high-grade PVR pre-operatively.4 In our study out of 8 (14.29%) unsuccessful cases, 6 (10.71%) had pre-operative grade-C, and 1 (1.79%) each had grade-B and grade-A PVR.
Ahmadieh et al, from Iran, while describing factors influencing anatomic and visual results in primary scleral buckling, reported a primary success rate of 84.6% and a final success of 96.1%.14
Anatomical success rates are generally higher at specialized clinics in developed countries than in third world and developing countries. Comer and his colleagues reported a primary success rate of 86.8% and a final success rate of 97.4% at Cambridge, UK.15 In our cases, 16 cases (28.57%) had trauma as a definite cause of RRD. Previously trauma has been reported to contribute in 30% of eyes in South Africa,16 23% in Zaire,17 and 1.6% in Japan.18
In this study, out of total 56 eyes, 11 (19.64 %) were myopic. Previously, RD was found to be associated with myopia in 35.0% cases in China,19 and 20.9% cases in UK.20
Proliferative vitreo-retinopathy (grade C) was present pre-operatively in 14 (25.00%) of our cases. This ratio was reported as 33% in S. Africa,16 32% in India,4 13% in Iran,14 and 4% in UK.15
Regarding post-operative visual improvement, a study from Kenya showed 6/60 or better vision in 55% of all operated eyes. The authors blamed pre-existing macular hole, detachment duration of over one month and poor pre-op visual acuity as independent risk factors for decreased post-operative vision in certain cases despite anatomical success. The Iranian study by Ahmadieh H et al found that amongst the anatomically successful cases, 44% achieved a vision better than 6/60.14 Indian study reported at least 6/60 vision in 80% of the successfully re-attached eyes.4 A study from Vancouver by Ross and Kozy reported a final VA of better than 6/60 in 95% of re-attached cases. However none of these eyes had an RD of more than one-week duration and non had a PVR or a macular hole.22 In this study, at the 2-weeks post-op follow-up visit, un-aided visual acuity (UAVA) was better than 6/60 in 16 (28.57%) cases.

Scleral buckling procedures are useful in the repair of primary rhegmatogenous retinal detachment. Reasonable anatomical success as well as vision enhancement can be achieved by these procedures even in some delayed and PVR cases. This study shows that trauma is the leading cause of retinal detachment in our circumstances. Even better visual outcome could have been achieved by recording best-corrected visual acuity (BCVA) and more prolonged follow-up.