Comparison of statistical methods, type of articles and study design used in selected Pakistani medical journals in 1998 and 2007

Objectives: To compare the statistical methods, types of article and design of studies used in 1998 and 2007 articles of leading indexed and non-indexed medical journals of Pakistan.
Methods: Six leading medical journals of Pakistan: (1) JCPSP, (2) JPMA, (3) JAMC, (4) PJMS, (5) PJMR, and (6) PAFMJ, were selected for this study. Articles reviewed were 1057 to achieve the above mentioned objective.
Results: The articles reviewed for 1998 and 2007 were 366 and 691, respectively. Original articles contributed the maximum percentage of 65.6%, followed by case reports with 24.8%. The contribution of case reports in 1998 was 20.5% which increased to 27.1% in 2007. There was no statistically significant difference between \'indexed\' and \'non-indexed\' journals for different type of statistical methods in 1998 or 2007. In total, 749 articles were categorized as \'original articles\' or \'short communication\'. Among them, 51% articles mentioned study design and 67.3% of them were correct for the respective methodology. In 1998, 202 (74%) articles did not use any statistics or indicated only descriptive statistics, while in 2007, 239 (50.2%) articles did the same. The reader who was familiar with t-test and contingency tables in 1998 could have understood 97.4% of the scientific articles. However, this percentage dropped to 83.0% in 2007.
Conclusions: Quality of elaborating methods and usage of biostatistics in 6 leading Pakistani medical journals improved from 1998 to 2007, but has still to come up as compared to other western medical journals (JPMA 60:745; 2010).

Medical research depends on biostatistical methods to form meaningful inferences from uncertain and haphazard data.1 Each article, includes different study designs whether it is interventional or non-interventional, and statistical methods to strengthen its results. Nevertheless, lack of knowledge of most of the physicians about statistical methods has been repeatedly documented.2-4 On the other hand, due to recent development of systematic reviews in the form of meta analysis and evidence based medicine, it is important now that clinicians should understand statistical methods not only to incorporate it in their own research papers/work, but also to correctly translate the published literature into improved patient care.5 It is due to doctors\' belief that the interpretations made in published materials are appropriate.6
Many reviews have been conducted in different countries, especially in Western countries2,5,7-17 to describe the use of statistical techniques in medical journals. Few reviews are also organized for the medical journals of developing countries.18-21 Almost all the reviews showed that there was a positive growth for the use of statistical techniques in medical writings. Better and more complex statistical analyses are introduced to prove the hypotheses. However, there has been no statistical review of Pakistani medical journals in the literature, as far as the authors\' knowledge is concerned. Therefore, this review was conducted to assess the level of improvement and changes that occurred in six leading Pakistani journals regarding the use of statistics, study design and types of article in 1998 and 2007.
Objectives: To compare the statistical methods, types of article and design of studies used in 1998 and 2007 articles of leading medical journals of Pakistan and to compare the indexed and non-indexed journals.

Six leading medical journals of Pakistan were selected for this study. They were: (1) Journal of College of Physicians and Surgeons of Pakistan (JCPSP), (2) Journal of Pakistan Medical Association (JPMA), (3) Journal of Ayub Medical College (JAMC), (4) Pakistan Journal of Medical Sciences (PJMS), (5) Pakistan Journal of Medical Research (PJMR), and (6) Pakistan Armed Forces Medical Journal (PAFMJ). The first three are indexed journals in Medline and last three are also the leading non-indexed journals of Pakistan. It should be noted that the above three medical journals are the only medical journals which are in Medline. All these journals are peer reviewed and have statistical consultants on their advisory board. All the issues of these journals of year 1998 and 2007 were reviewed for the study. One of the authors (MR) reviewed all these articles manually. JCPSP was bi-monthly in 1998 and became monthly in 2007. JPMA was monthly in both the years of 1998 and 2007. JAMC and PAFMJ were six monthly in 1998 and became quarterly in 2007. While remaining two journals, PJMR and PJMS, were quarterly in year 1998 and 2007. Number of issues reviewed for 1998 and 2007 of these six journals were 30 and 40, respectively. After combining the journals into \'indexed\' and \'non-indexed\' categories, descriptive statistics, type of the articles and different statistical methods were compared. All together 1057 articles were reviewed. The information recorded from these journals was: types of article; study design, appropriateness of study design, any statistical methods used, types of statistics and p-values with or without any statistical test mentioned. Wang and Zhang18 classification was employed for study design grouping and Emerson and Colditz\'s9 classification was used for statistical methods categorization. Editorials, commentaries and review of the books were not considered in this review. If more than one statistical technique were employed in one article, all of them were recorded; however, if the same statistical method was repeatedly used in the same article, the method was recorded only once. Chi-square test was employed to compare the differences of percentages. The significant level was fixed at 5%. 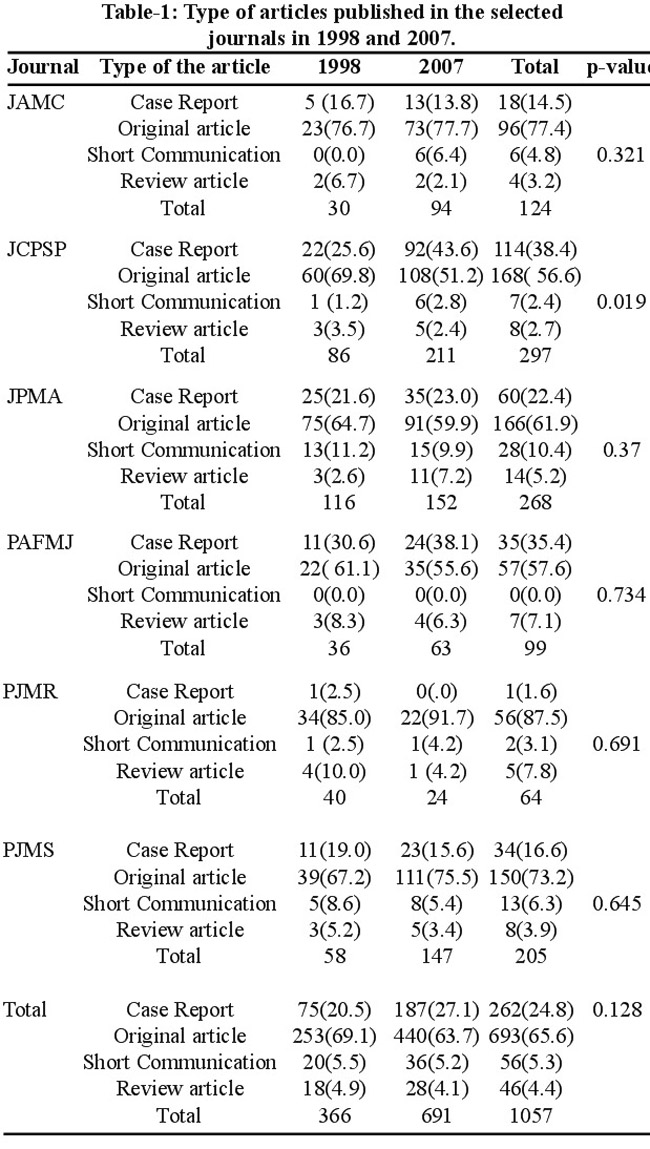 Quality of elaborating methods and usage of biostatistics in 6 leading Pakistani medical journals has gradually improved from 1998 to 2007, but they are still quite behind other medical journals of the western countries. Inappropriate use of statistics remains a problem. The major problems of omitting description of statistical methods and giving \'p\' values without mentioning the statistical procedure suggest that the authors of medical articles need to enhance their knowledge in biostatistics and epidemiology to improve the quality of their articles.

The authors are grateful to Ms. Salma Arzoo Khattak for data entry and statistical work. We are also thankful to Ms. Sumaira Naz for secretarial help.