Hyperhomocysteinaemia, vascular related pregnancy complications and the response to vitamin supplementation in pregnant women of Pakistan

Objectives: To elaborate the relationship between serum homocysteine (hcy) levels and vascular related pregnancy complications in pregnant women as well as to assess the homocysteine lowering effects of folate, vitamin B12 and B6. The secondary objectives were to establish a link between serum homocysteine levels and maternal age, parity, gestational age, foetal birth weight, mean arterial pressure and albuminuria.
Methods: A total of 332 pregnant women (gestational age: >24 weeks) attending Liaquat University Hospital Hyderabad, Pakistan, were enrolled. Of these 112 were healthy normal pregnant women; 61 pregnant women had pre-eclampsia, 49 with eclampsia and 110 with placental abruption. A cohort of 30 patients with elevated hcy levels (>8.2µmol/liter), were given folate, vitamin B12 and B6 as supplements for 6 weeks. Fasting blood samples were collected, centrifuged and stored at 2 to 8°C. Hcy levels were determined by IMx immunoassay.
Results: Higher serum hcy levels, higher mean arterial blood pressure (MAP), pre-term deliveries and low foetal birth weights were noted in women with pregnancies complicated by pre-eclampsia and eclampsia as compared to control and those with placental abruption. Significant hcy lowering effects of folate, vitamin B12 and B6 supplementation were observed. Significant and positive correlation was found between hhcy and MAP (r = 0.001; p<0.001), albuminuria (r = 0.004; p< 0.01) and low birth weights (r= 0.05; p<0.06).
Conclusion: Higher hcy levels in pregnancies complicated by pre-eclampsia and eclampsia have been noted. Data support the hypothesis that folate, vitamin B12 and B6 lower hcy levels in hyperhomocysteinaemic women (JPMA 60:741; 2010).

Homocysteine (hcy) is a sulphur containing amino acid that is derived from demethylation of methionine, an essential amino acid, requiring folate, vitamin B12 and B6 as co-enzymes. Malnutrition or malabsorption of folate and/or vitamin B12 or B6 or inherited enzymatic defects within the methionine — homocysteine pathway such as methylene tetrahydrofolate reductase or cystathionine B-synthase deficiency leads to raised homocysteine levels.1-3 Hcy levels are influenced by age, gender and pregnancy.2 In addition, certain chronic medical disorders, malignancies and medications also alter its metabolism, thus leading to hyperhomocysteinaemia (hhcy).4-6 Hhcy is considered an independent risk factor for coronary, arterial and peripheral vascular disease.7 The exact pathogenesis of hhcy induced vascular damage is still not fully understood, however, several factors such as oxidative stress, endothelial dysfunction, smooth muscle cell proliferation and coagulation abnormalities have been attributed to hhcy.8,9
Pre-eclampsia and placental abruption are among the leading causes of foetomaternal morbidity and mortality worldwide including Pakistan.10-12 Their exact etiology remains obscure, however vascular damage in the maternal uteroplacental and foetal umbilical placental circulation is supposed to be the central feature. Due to common pathologic mechanism(s) that result in vascular damage, a link between hhcy and vascular related pregnancy disorders has been proposed.13 This assumption has been confirmed by some researchers while others have refuted it.14 Hyperhomocysteinaemia secondary to Vitamin B6 and folate deficiency was reported to be prevalent in apparently healthy Pakistani population.15
Therefore this study was conducted to examine a possible association between hhcy and pre-eclampsia and placental abruption in special context to Pakistani population. Also, to access the homocysteine lowering effects of folate, vitamin B6 and B12 in pregnant women.
The aim was to find out the cost effective solution of these moribund conditions, which adversely affects the health of the mother and her children, household productivity and national economy.

This case controlled study was conducted from September 2006 to May 2008 at the Department of Obstetrics and Gynaecology, Liaquat University Hospital Hyderabad, Pakistan, which is a tertiary referral hospital, with 1350 beds, catering to the needs of both urban and rural population of Sindh province of Pakistan. Prior to commencement, the study protocol was approved by the Ethics Committee of Liaquat University of Medical and Health Sciences, (LUMHS) Jamshoro. Written informed consent was obtained from all study participants or their immediate relatives or guardians. A total of 332 pregnant women (gestational age: >24 weeks) were enrolled, including 112 healthy normal pregnant women (control); 61 pregnant women with the diagnosis of pre-eclampsia, 49 with eclampsia and 110 with the diagnosis of placental abruption.
Pre-eclampsia was defined as diastolic blood pressure more than 90 mmHg or systolic blood pressure more than 140 mmHg on 2 or more occasions, 4 hours apart with concordant proteinuria of 0.3 gm/24 hours or >2+ on dipstick in a random urine sample. The criterion for the diagnosis of eclampsia was the onset of generalized fits. Placental abruption was defined as antepartum haemorrhage (APH) after 24 weeks of gestation with clinical and ultrasound diagnosis.
Patients with pre-existing hypertension, diabetes mellitus, renal or liver disorders, multiple gestation and polyhydramnios were excluded from the study. In addition, pregnant women who had taken folate, vitamin B12 or B6 supplements in the last 3 months or who were taking anti-folate drugs were also excluded.
Fasting venous blood samples were collected using ante-cubital vein*. After having transferred to Research and Diagnostic Laboratory of LUMHS Jamshoro, the samples were centrifuged for 15 minutes at 3500 rpm and plasma was separated and stored at 2-8°C until analysis. Hcy levels were determined by IMx immunoassay (Abbot GMBH).
A cohort of 30 pregnant women, from all the study groups was selected for intervention. The inclusion criterion was serum homocysteine level more than 8.2 µmol/lit. They were given folate, 5 mg/day, 1000 µg/day of vitamin B12 and 1000 µg/day of vitamin B6 for 6 weeks, in addition to conventional therapy necessary for underlying clinical conditions. After 6 weeks, their serum hcy levels were analyzed again.
The statistical analysis was performed on the data by using SPSS version 11. Clinical and haematological parameters in the groups were analyzed by using analysis of variance and co-variance (ANOVA) with 95% confidence interval.
Comparisons between pre and post-vitamin supplementation homocysteine levels were made by paired sample T-test. P value of < 5% was considered significant. Chi-square test was used to calculate Pearson\'s correlation.

Table-2 demonstrates haematological features amongst the groups. No significant differences were observed in the haematological features between the groups except platelet count which were low in affected groups (p<0.001). Mean serum creatinine level was significantly higher in the complicated pregnancies compared to healthy pregnant women (p<0.001). Mean serum hcy levels were significantly raised in women with pregnancies complicated by pre-eclampsia and eclampsia in comparison to placental abruption and healthy pregnant women. Correlations between maternal hhcy, maternal age, gestational age, parity, MAP, albuminuria and foetal weight were assessed. Significant positive correlation was observed between hhcy and MAP (r = 0.001; p = <0.001), hhcy and albuminuria (r = 0.004; p = 0.01) and hhcy and low birth weight (r = 0.05; p = 0.06). However, no correlation was observed between hhcy and maternal age, gestational age and parity. 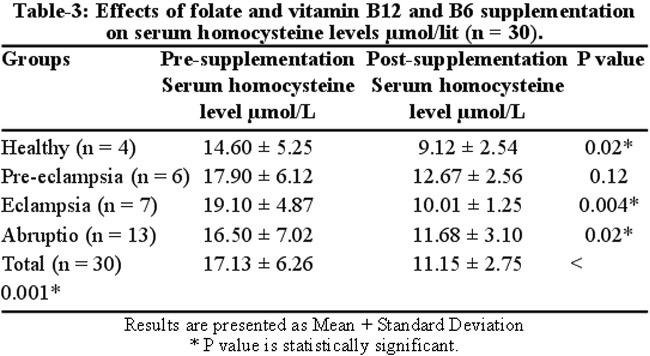 Table-3 shows the effect of folate, vitamin B12 and B6 on hcy levels. After 6 weeks of supplement ingestion, a statistically significant decrease was observed in hcy levels among those patients who initially exhibited elevated hcy levels.

To the best of our knowledge, our study is the first in Pakistan that systematically assesses an association between hhcy and pre-eclampsia, eclampsia and placental abruption in pregnant women. The data on hcy lowering effects of folate, vitamin B12 and B6 are the highlights of this study.
The data recorded in our study substantiates previous reports on the assumption of a possible linkage between hhcy and pre-eclampsia and eclampsia. Refsum et al2 in a large community based study on 5883 women in Norway, suggested a strong association between hhcy and pregnancy complications such as pre-eclampsia, placental abruption, prematurity, still birth and low birth weight.
The results of an another study, on 43 pre-eclamptic/eclamptic women and 130 healthy pregnant women, demonstrated significantly higher hcy levels in women with pre-eclampsia/eclampsia than controls (10.1 vs. 8.4 µmol/L, p< 0.01).16 Similarly, Singh et al17 supporting previous observations, added that severity of pre-eclampsia was directly related to hhcy. However, a recent meta-analysis of 25 published studies (having a total of 3649 pre-eclamptic patients), measuring hcy concentrations before and after the onset of pre-eclampsia refuted the existence of a causal relationship between hhcy and pre-eclampsia/eclampsia.18
Our study does not substantiate an association of hcy with placental abruption, as suggested by some researchers.2,19 This difference may be attributed to differences in disease definition criteria and study design.
Association of hhcy with low foetal birth weight was observed in our study (r = 0.05, p value 0.06). Similar findings were made by Murphy et al20 who found that neonates of mothers having raised hcy levels before and during pregnancy weighed less. There are reports of elevated umbilical cord plasma hcy levels in pregnancies complicated by pre-eclampsia.13,20 It might be postulated that low birth weight was secondary to feto-placental endothelial damage and oxidative stress induced by maternal and foetal hhcy.
Serum creatinine concentrations were significantly higher in pre-eclamptic women as compared to controls (0.83mg/dl versus 0.65 mg/dl, p< 0.001). This is probably due to reduced renal perfusion and glomerular filtration rate, secondarily to abnormal glomerular morphology, i.e., endotheliosis in pre-eclampsia. Since nearly 70% of the daily hcy elimination is dependant on renal uptake and metabolism of hcy, altered renal function might be responsible for hhcy in pre-eclamptic women as compared to controls.21 Significant positive correlation was observed between MAP, albuminuria and hcy levels, indicating the involvement of kidneys in pre-eclamptic pregnancies.
Our study supports the findings of meta-analysis of 25 randomized controlled trials involving 2596 participants suggesting that daily supplementation of 0.5 - 5 mg of folate, lowered hcy concentrations by 25%. Vitamin B12 supplementation of 0.4 mg daily further reduced hcy levels by about 7%, while vitamin B6 had no significant effect.22
We examined the effects of folate, vitamin B12 and B6 as supplementation on a cohort of 30 pregnant women with high hcy levels. Our observations suggest a significant reduction of hcy levels following ingestion of folate (5 mg/day), vitamin B6 (1000 mg/day) and B12 (1000 mg/day) for 6 weeks.
These observations are in line with the findings of Leeda et al23 who also observed significant reduction in mean fasting hcy levels (from 16.6 mmol/L to 6.1 mmol/L), following daily supplementation of folate (5 mg) and vitamin B6 (250 mg) for 10 weeks in women with history of pre-eclampsia. In 14 eligible women, vitamin supplementation was continued up to the next pregnancy with the addition of low dose aspirin at 10-12 weeks. Although half of those women developed pre-eclampsia but disease onset occurred later in pregnancy, resulting in neonates delivered at later gestational ages with better birth weights.
It is, therefore, suggested that folate, vitamin B12 and B6 supplementation is an effective, inexpensive and safe way to reduce hcy levels which might be helpful in reducing disease complications in patients with pre-eclampsia. In this regard, large scale clinical studies are needed.
In conclusion, results of our study suggest an association of hhcy in pregnancies complicated by pre-eclampsia and eclampsia. Furthermore, it demonstrates the hcy lowering effects of folate, vitamin B12 and B6 in hyperhomocysteinaemic women.

Funding was provided by LUMHS, Jamshoro, and technical support by Research and Diagnostic Laboratory, LUMHS, Jamshoro. We thank Dr. Shazia Asad and Afroz Nizamani for their assistance in data management and sample collection. We would also like to thank Mr. Adnan Khan for technical assistance and Abbot Laboratory (Pak) Ltd. for providing equipments (IMx System).