Goitre is a common clinical entity with a prevalence of 15-39%, in the adult population, in endemic areas. One of the mechanical results of goitre is deviation and compression of the trachea which makes tracheal intubation difficult and contributes to increased morbidity and mortality associated with anaesthesia.1 Identifying situations and patients at risk, for airway management problems, is the key to optimizing care and has been the focus of numerous publications.2-4
Airway management is a fundamental goal and tracheal intubation by direct laryngoscopy is an essential skill for anaesthesiologists. The appropriate management of airway in thyroid surgery is always a challenge. Maintaining a patent airway is important for oxygenation and ventilation. Failure to do so can result in morbidity and mortality. In fact 28% of all anaesthesia related deaths are due to either inability to mask ventilate or intubate.5 Thyroid surgery is usually considered a risk factor for difficult intubation but has not been widely studied.
The aim of this study was to evaluate the influence of goitre on anatomic features and the correlation of these changes with difficulty in intubation.

A prospective study was conducted at a tertiary care hospital in Pakistan. The study cohort consisted of patients aged 17 years and older, scheduled for elective surgery to treat euthyroid goitre. Patients with obesity and airway malformations were excluded from the study. Informed consent was taken preoperatively and a structured questionnaire was filled out which included demographic details and variables relevant to airway intubation.
In addition the following measurements were also recorded:
1) Neck circumference (cm) at the level of the thyroid cartilage
2) Width of mouth opening (cm) as the incisor gap with the mouth fully open.
3) Thyromental distance (cm) and sternomental distance (cm) with the neck extended
4) The modified Mallampati classification without phonation (Class I: Soft palate, fauces, uvula and pillars visible, Class II: Soft palate, fauces and uvula visible, Class III: soft palate and base of the uvula visible, Class IV: soft palate not visible)
5) Lip test
6) Vocal cord visibility on indirect laryngoscope and the radiological deviation of the trachea.
7) Palpability of the larynx: Class I: larynx palpable. Class II: larynx partially palpable, Class III: larynx not palpable.
In the operating room, patients were positioned with pillows under their shoulder with the head elevated and neck extended in the sniffing position. Each patient was monitored by electrocardiography, pulse oximetry, non invasive blood pressure and capnograph. Patients were made to breathe 100% oxygen by face mask for a minimum of three minutes. Anaesthesia was then induced with propofol 2.5 mg/kg and succinylcholine 1mg/kg for facilitation of endotracheal intubation.
The laryngoscopy view was graded according to Cormock and Lehane\'s scale as follows: Grade I view: Vocal cords were completely visible,
Grade II view: Only the arytenoids were visible,
Grade III view: Only epiglottis was visible,
Grade IV view: Epiglottis was not visible,
Grade III and IV were considered as difficult intubations (DTI).
Statistical analysis was performed using SPSS 13. Chi Square test (with Yates correction) and Fisher\'s exact test were used for the analysis of individual factor and logistic regression analysis was used to determine independent predictor for difficult intubation. 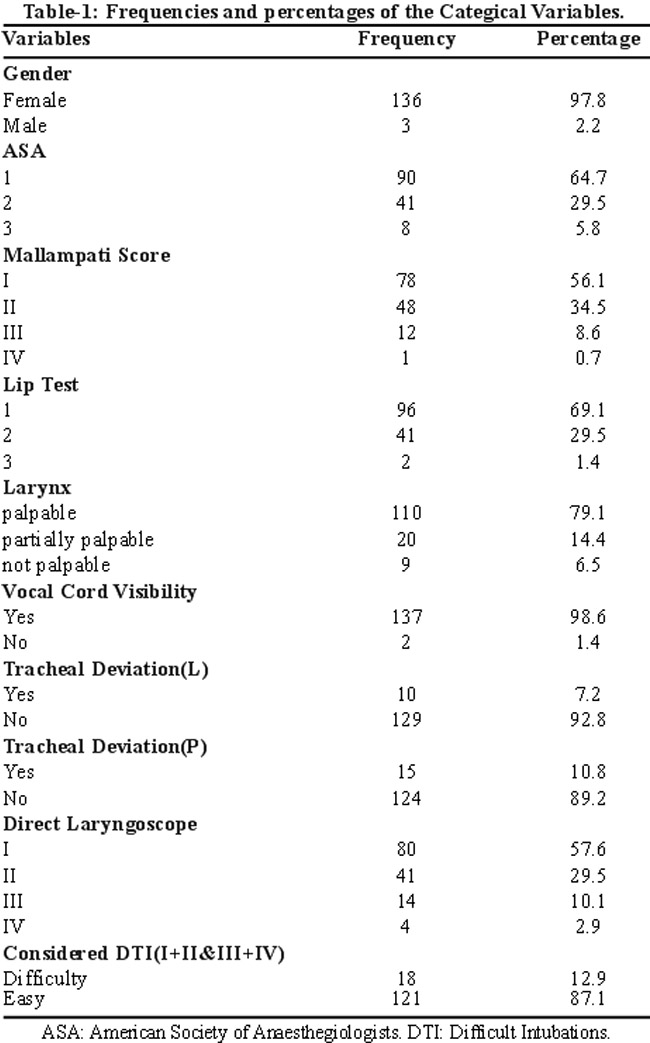 Mean, median and ranges of the numerical variables like age, weight, neck circumference, sternothyroid distance, and weight of the specimen are described (Table-2).

Multivariate logistic regression confirmed that the "goodness of the fitness test"the chi-square test is 40.586 with 5 degree of freedom. Hosmer and Lemeshow test (chi-square value is 5.001 and significance level of 0.786) supports the model. The Cox and Snell pseudo R Square (0.256) and Nagelkerke pseudo Square (0.474) values suggest 25.6% to 47.4% of the variability is explained by the set of variables. Specificity of the model was found to be 97.5% with a sensitivity of 33.33% (PPV 66.66%, NPV 90.63%). All predictors were found to be significant as single predictors but on logistic regression analysis it was found that the circumference of the neck was the only independent significant variable (p < 0.001) and predictor for difficult intubation.

Anaesthesia for thyroidectomy may be complicated by airway problems resulting from retrosternal extension of the gland. The anaesthesiologist should pay particular attention to preoperative assessment of the airway and be able to deal with acute airway complication in the preoperative phase. If preoperative airway assessment predicts a difficult intubation and the ENT surgeon is unable to see the vocal cords by indirect laryngoscopy, the anaesthesiologist must prepare for a difficult intubation with prearrangement of the necessary equipment. Up to 6% of tracheal intubations for thyroid surgery can be difficult.6 Interestingly it has been reported that the difficulty of intubation is unrelated to the extent of the abnormality on imaging studies of the neck.7 Whenever there is a concern that the airway will be lost if anaesthesia is induced, "awake fiber optic intubation" is the procedure of choice. The traditional technique of inhalation induction has regained acceptability following the introduction of sevoflurane.8,9 It may be adopted when the patient is extremely anxious about awake intubation and the anaesthesiologist believes that the size of the goitre will not cause loss of airway after induction of anaesthesia.
Historically, many clinicians have tried to identify anatomic features having unfavourable influences on direct laryngoscopy based on disproportion, distortion, decreased mobility of joints and dental overbite. Cass et al.10 placed emphasis on short muscular necks with a full dentition, a needing mandible with obtuse mandibular angles, protuding maxillary incisor teeth, decreased mobility at temporo -mandibular joints, a long high arching palate and increased alveolo-mental distance. White and Kander11 discovered through radiographic studies that the posterior depth of the mandible (the distance between the alveolus immediately behind the third molar tooth and the lower border of the mandible) was an important factor in determining the possibility of a difficult laryngoscopy. Nichol and Zuck12 directed attention to the atlanto occipital distance as the major factor that determines the range of motion at the altanto occipital joint and thus the exposure of larynx. Bannister and Macbeth13 stressed the significance of optimal position for alignment of oral, pharyngeal, and laryngeal access.
S. Rao Mallampati described an airway classification to preoperatively assess difficulty in intubation based on the clinical assessment of the pharynx. Since its conception in 1983 and implementation in 1985, this classification has undergone a lot of criticism regarding its clinical usefulness, reliability and predictability.14 Beside this Mallampati is still the most common bedside test used to predict difficult tracheal intubation because it is simple, reproducible, preanaesthetic airway assessment method when performed properly.
Another important parameter is the thymomental distance.15 The sensitivity of this parameter is found to be from 62% to 91%.
Finding a bedside test that is effective for predicting difficult intubation is still challenging.16 Among the potential predictors we evaluated neck circumference and a Mallampati score > 3, were the only useful bedside test predictors of difficult intubation. Our results are consistent with Brodsky et al17 who showed that neck circumference at the thyroid cartilage is a valuable predictor of difficult laryngoscopy in obese patients and with H. Gonzalez who showed that measurement of neck circumference is a predictive test even in lean patients.18
This study has several limitations. There was no blinding or randomization because it was not technically possible. Furthermore the overwhelming majority of patients were females. However this pattern closely matches the real life situation which makes the results applicable.
In conclusion we found that a difficult intubation was associated with increasing neck circumference. This study supports the use of assessing neck circumference preoperatively to predict a potentially difficult intubation.