Objectives: To correlate the clinical features of women presenting with locally advanced breast cancer with event-free survival (EFS) and overall survival (OS) and to evaluate the patterns of relapse.
Methods: A total of 200 patients presenting consecutively over 9 years with Stage III breast cancer were evaluated for age, socio-economic status (SES), tumour size and grade, number of involved lymph nodes, stage III sub-categories, estrogen and progesterone receptor (ER/PR) status, treatment profiles and responses, and sites of relapse. EFS and OS at 5 and 10 years were calculated.
Results: Median age was 45 years. Poorly differentiated tumours were found in 127 patients, while 128 had larger tumours (T3 and T4). Eighty women had extensive nodal involvement (N2 and N3), and 86 had Stage IIIA tumours. Chemotherapy was given to 44 patients before surgery and one of these patients achieved pathological complete response. At 5 and 10 years, EFS was 25% and 7%, and OS was 52% and 31%, respectively. By Cox regression analysis, significant predictors of EFS included tumour size (95% CI 1.14-1.72), nodal involvement (95% CI 1.06-1.59) and ER/PR positive tumours (95% CI 1.08-2.29). Predictors of OS included nodal involvement (95% CI 0.98-3.3) and ER/PR positive tumours (95% CI 1.08-2.29). No patient in stage IIIC was alive at 10 years. Loco-regional disease was the most common site of relapse (28.5%).
Conclusions: Locally advance breast cancer at our centre is associated with poor survival, and most patients relapsed by 5 years (JPMA 60:721; 2010).

Locally advanced breast cancer (LABC) includes non-metastatic tumours larger than 5 cm in diameter or that involve skin or chest wall. These also include tumours associated with fixed axillary lymph nodes and with ipsilateral supraclavicular, infraclavicular or internal mammary nodal involvement.1
LABC accounts for 40-60% of all breast cancers on presentation in developing countries2-5 but for only 5-7% in U.S.6 Higher incidence in developing countries and among medically underserved populations in US is essentially due to lack of active screening and early detection programmes.5-9 Low awareness of breast cancer, poor access to health care due to poverty and cultural issues are other contributory factors for late presentation.10,11
Today treatment of LABC requires a combination of systemic and local/regional therapies. The most common approach for treating LABC in developed countries consists of neoadjuvant chemotherapy with anthracyclines and taxanes followed by surgery and radiation therapy; hormonal treatment is added for receptor-positive disease,12-15 and patients with Her2neu-positive disease receive trastuzumab therapy.16,17 Most patients have good clinical responses to induction chemotherapy in both the primary tumour and regional lymph nodes, with clinical Complete Response (CR) in the range of 7% to 65% and pathological CR (pCR) in 4% to 29% of patients.19 Analysis of long-term outcomes showed that pCR to neoadjuvant chemotherapy was associated with significantly higher disease-free survival (DFS) and overall survival (OS) rates as compared to minimal or no response.12
As there is little information on the clinical features, treatment and long term survival of patients with LABC in developing countries, we decided to evaluate our LABC patients for OS, EFS and the factors that predict survival in these patients.

All 200 consecutive LABC patients who presented at Jinnah Hospital, Lahore, from July 1997-June 2006 were included in this study. Clinical features were noted, including tumour grade, size of tumour, number of involved lymph nodes, stage subtype and hormone receptor status. Hormone receptor status was determined in 165 patients, and only 64 patients were tested for Her 2-receptor because of economic constraints.
All patients received surgery and radiotherapy. Forty-four patients received neoadjuvant chemotherapy, and adjuvant chemotherapy was given to 156 patients after modified radical mastectomy (MRM). Anthracycline-based regimens were the most common form of chemotherapy (170 patients) used. Patients with hormone receptor-positive tumours received hormonal treatment. None of the patients received treatment for Her2-neu-positive disease due to economic constraints.
A physical and radiological (ultrasound/mammogram) examination was performed before the start of neo-adjuvant chemotherapy. Complete clinical response was defined as the absence of disease in the breast and axilla on physical examination and imaging (mammographic/ultrasound) of the breast and axilla.  Mammography was performed only on paying patients. Pathological complete response (pCR) was defined as the absence of disease in the breast or axilla and in the primary tumour or axillary lymph nodes after mastectomy on histological examination of surgical specimens.
SPSS version 13.0 was used for statistical analysis. Survival outcomes were calculated for all patients by Kaplan-Meier survival curves. Log-rank test was used to compare different survival curves. Cox-regression model analyses were performed to assess the factors predictive of EFS and OS.

The clinical features of the patients are listed in Table-1. 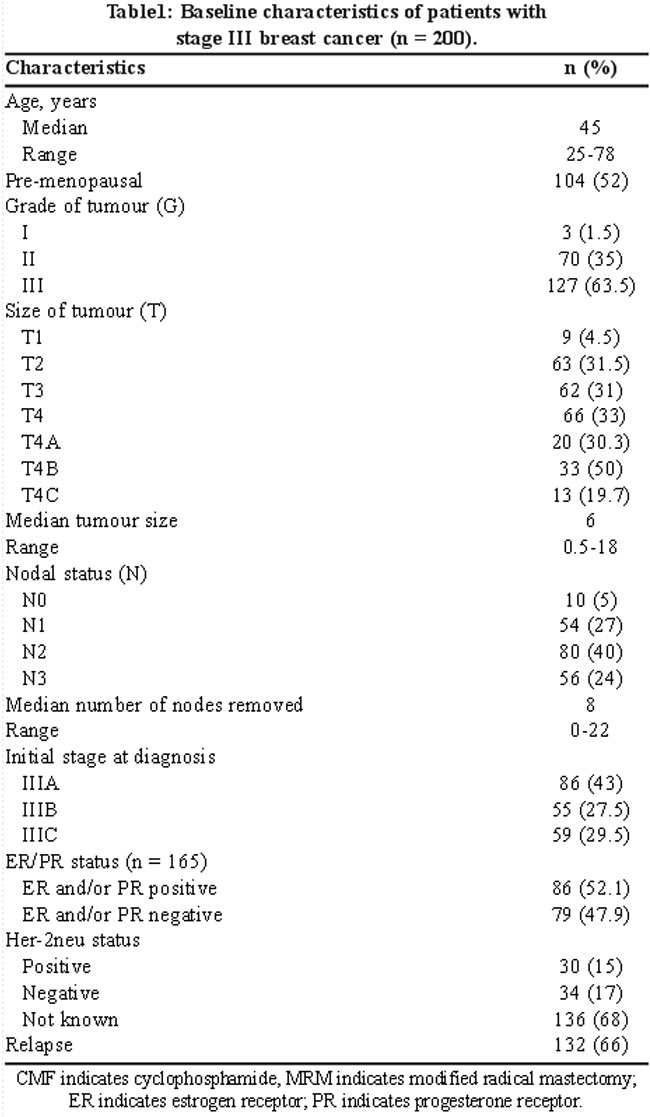 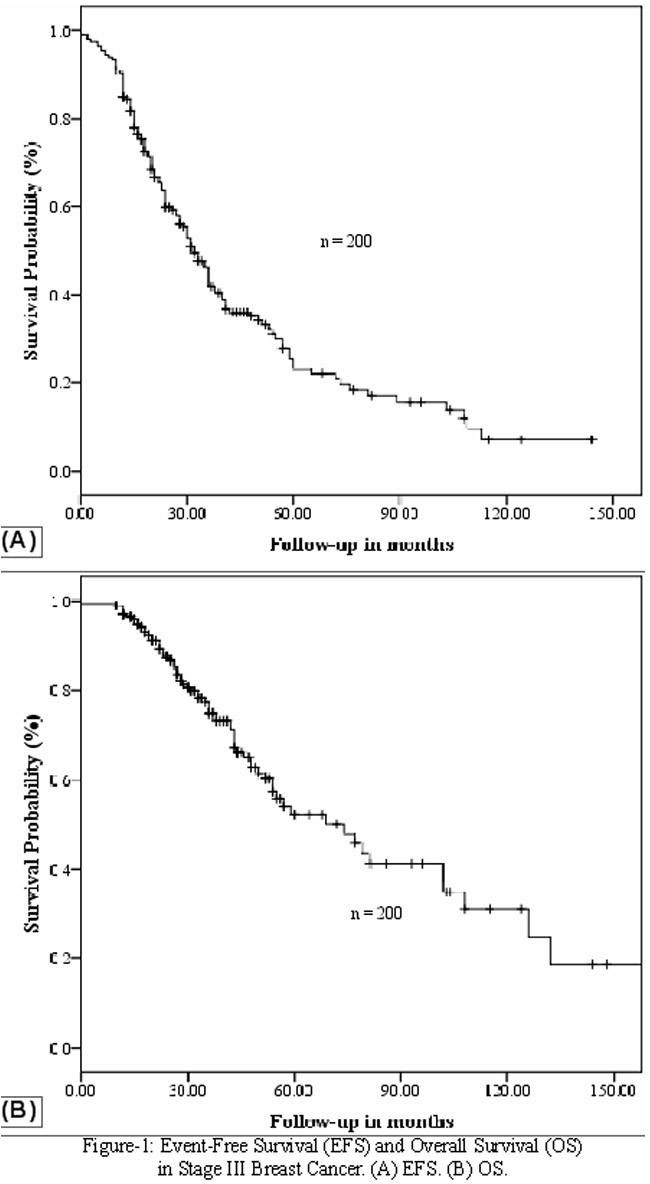 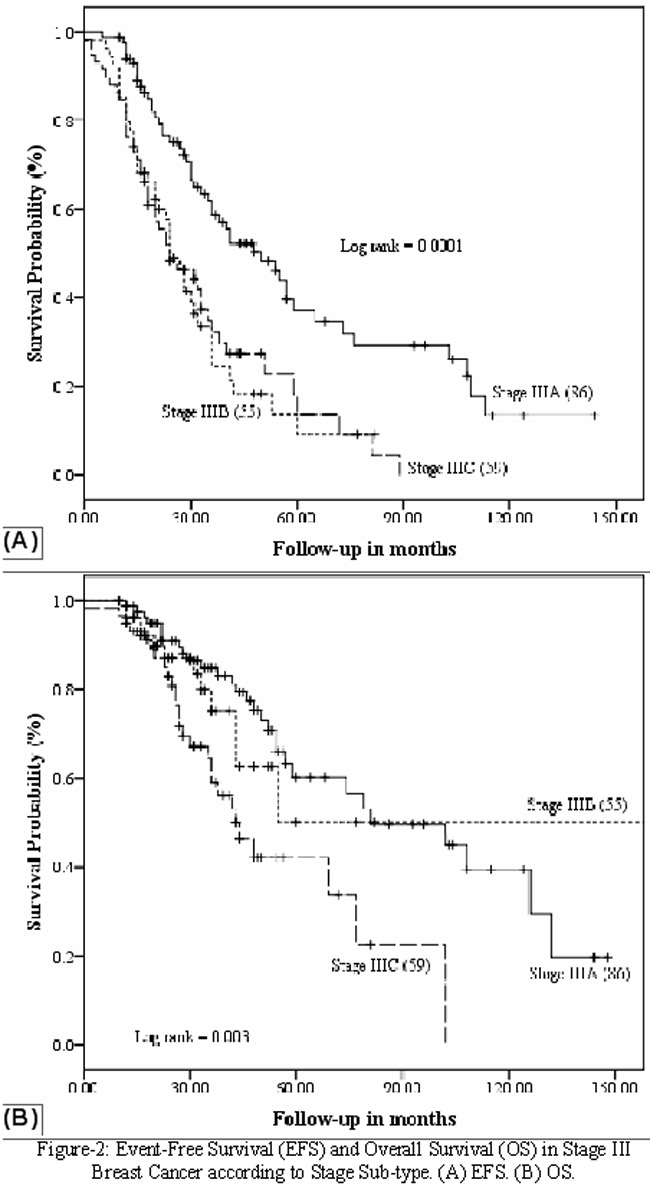 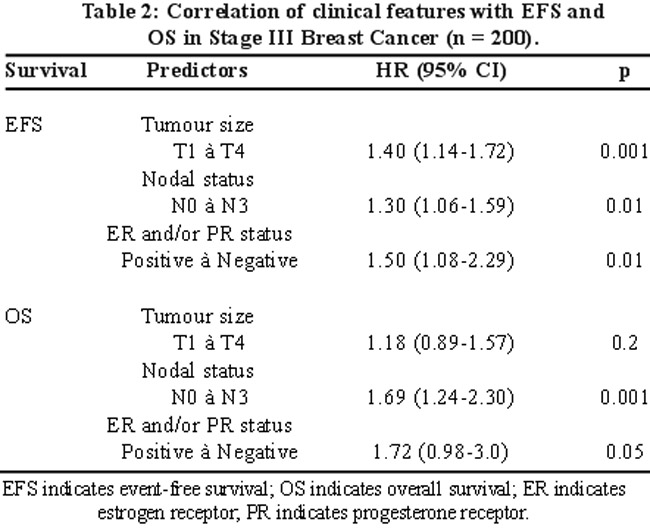 Table-2 shows that the most significant predictors of better EFS were smaller tumour size (< 5 cm), < 3 involved nodes and receptor-positive disease. For better OS, < 3 involved nodes and receptor-positive disease were the most significant variables.
Recurrence of disease was observed in 132 patients. The most common recurrence was loco-regional (57), followed by visceral (34) and bone (20). All 13 patients who did not receive any form of chemotherapy developed recurrent disease.
Of the 44 patients who received neo-adjuvant chemotherapy, 36 underwent MRM. Of these, only one achieved pCR, and 29 achieved a partial clinical response.

This study shows that poor survival among patients with LABC treated at our centre is associated with more aggressive, larger tumours and more extensive axillary nodal involvement. Because of the advanced clinical features of these cancers, relapse is common. The presence of Her2-neu receptors can adversely affect the survival, but, unfortunately, we were able to test only 64 patients for Her2-neu, and none of those who tested positive for Her2-neu received targeted therapy because of financial constraints.
As in other studies in developing countries, the median age of our patients was 45 years and most were premenopausal3,6,12,13 with receptor-negative disease. As our patients are relatively young women in their most productive years, morbidity and deaths among these women have a devastating effect on the well-being of their families.
Response to neoadjuvant therapy is a marker of response in distant occult micrometastases and is used as a surrogate for the overall efficacy of chemotherapy in patients with large operable tumours. The higher pCR rates that have been achieved by the introduction of more effective chemotherapy regimens are presumed to improve EFS and OS.16-20 Neoadjuvant chemotherapy was given to only 44 patients, mostly with stages III B and C disease. Nearly 66% of our patients receiving neo-adjuvant chemotherapy achieved partial clinical responses after 4-6 cycles, as in other studies where good responses were noted in 60%-80%. Of major concern was that only one of our patients had a pCR, whereas in developed countries the rate of pCR with anthracyclines alone is in the range of 13-15%.19 The lower rate of pCR in our series is due to several factors, including larger tumours in both the breasts and the axilla. Other contributory factors included lack of awareness, social factors, co-morbid conditions causing dose delays or dose modifications. Patients also tend to delay their treatments due to financial problems.
In our setting, primary surgery followed by adjuvant systemic therapy and radiation were used because they are less resource intensive, and OS appears to be similar with and without the addition of neoadjuvant therapy.20,21 Similar conclusions were reached in a meta-analysis of nine trials in which women with breast cancer were randomly assigned to neoadjuvant or adjuvant systemic therapy.18
Published data from affluent countries show that administration of neoadjuvant chemotherapy may make it possible for breast conservation surgery to be performed instead of MRM.1 Unfortunately, this was not an option for our patients, because we are resource constrained, poorly equipped, with limited trained manpower and few mammography units. Besides, breast conservation surgery requires vigilant follow-up and resources, which might compromise the survival of our vulnerable patients, in whom LABC is most prevalent.
National diagnostic and treatment guidelines are needed to establish a "standard of care" and promote the rational use of existing resources and greater equity in access to treatment, as stated by WHO.22 We have already reported excellent 5-year survival in our patients with localized disease with use of considerably fewer resources.23 Despite this, early detection remains elusive for a vast majority of the population in poor countries.9,14 The disproportion between the growing costs of medical care and our limited capacity to pay the huge costs of these drugs places us in a dilemma. These are common problems in all developing countries and are not unique for our population. We must develop a pragmatic approach and establish our health care priorities, preferably on the basis of epidemiological studies of morbidity and mortality and allocate our resources judiciously and equitably.

We are grateful to Elisabeth Heseltine and Dr. Ama Rohatiner for their guidance and valuable comments, at the 3rd International Network for Cancer Research and Treatment (INCTR) workshop on Scientific Writing.