The carotid bodies are reddish brown, ellipsoid structures, lying embedded in the adventitia of the carotid artery bifurcation.1,2 Physiologically, they are known to be involved in the reflex control of heart rate, blood pressure and respiration via the chemical composition of blood and its temperature.1 Described first by Haller in 1743, they are derived from the epitheloid cells of neuroectodermal origin.3 Tumors of this tissue were originally described as chemodectomas by Mulligan; now they are considered as a part of the widely described group of tumors known as paragangliomas.1
Carotid body tumors are very rare neoplasms constituting less than 0.5% of all body tumors.4 An incidence of 0.012% of all surgical specimens has been reported by a hospital based study describing the paragangliomas of the head and neck region.5 Exact etiology of these tumors is not known, but they are noted to be more common in people living at high altitudes.6 Sporadic forms of carotid body tumors are more frequent, while familial forms account for about 10% of the cases in most series.7 The tumors are bilateral in 30% of the familial, but only 5% of the sporadic cases.8
Carotid body tumors are usually benign. Symptoms are generally due to local involvement of the nerves and vessels. The malignant potential with possible metastasis has been estimated to be around 2% to 9%; but as for most other neuroendocrine tumors, the usual histologic criteria for malignancy i.e., nuclear atypia and nuclear to cytoplasmic ratio, do not apply; and the likely clinical behavior cannot be predicted from the routinely stained tissues.9,10 The true proof of malignancy is the presence of lymph node or distant metastases, which may not become evident even years after the original resection. Familial, bilateral or multiple paragangliomas in young patients are more prone to aggressive behavior, and these tumors can metastasize to the lungs, liver and bones.4 Some researchers suggest that all carotid body tumors be considered malignant because of their progressive involvement of local neurovascular structures.11
Most of the carotid body tumors are asymptomatic in the early clinical phase. Eventually, at least 75% of the patients develop symptoms such as enlarging neck mass, neck pain, hoarseness or syncope.4 Rarely the patients may exhibit other symptoms when the tumors are endocrinologically active. The physical examination usually reveals a pulsatile mass below the angle of mandible which can be moved laterally but not vertically (Fontaine's sign).4
A number of diagnostic and therapeutic approaches have been suggested for the management of carotid body tumors, but they continue to pose diagnostic, investigative and therapeutic challenges. The diagnostic modalities used for the evaluation of carotid body tumors include, color-flow duplex ultrasonography, computed tomography and magnetic resonance imaging. Angiography is conventionally considered to be the gold standard. The treatment options include surgery, radiotherapy and angio-embolization.12 The decision to operate depends upon the age of the patient, co-morbid conditions, symptoms, rate of growth and the size of the tumor.12 As it is a relatively slow growing tumor, a select group of patients in the advanced age group or with significant co-morbids may be carefully observed with possible use of radiotherapy, resulting in a reasonable survival.12 In young patients who are otherwise low risk for anesthesia, surgery remains the treatment option of choice, as it is the only available curative therapy.
The basic objective of our study was to review the presentation, management and outcome of carotid body tumors at our hospital.

The medical records of all the patients who were admitted at The Aga Khan University Hospital (AKUH), Karachi, between January 1991 to January 2002, with a diagnosis of carotid body tumor were identified and retrieved using the ICD-9-CM coding system. The data was collected for patients who underwent surgical resection, and the variables reviewed included demographic features, clinical presentation, diagnosis, management and outcome. A special note was made for the type of therapeutic intervention used including the use of pre-operative angio-embolization and surgical procedure. The morbidity and mortality related to each procedure was also identified. The data was analyzed by using the student t-test for continuous variables and the Fischer Exact test for categorical data with computer-based SPSS version 10 software package.

total of 8 patients with 8 carotid body tumors were treated surgically at the AKUH during the study period of 11 years. The study group comprised of 6 males and 2 females with a median age of 46 years (range 26-68 years). One patient had a family history of carotid body tumors, while another had an extra cervical ganglioma (abdomen) resected previously. All the eight patients presented with history of a neck mass, which was progressively increasing in size. In 6 patients the mass was asymptomatic, while two patients complained of mild neck pain. None of the patients had symptoms suggestive of endocrinological activity. Physical examination revealed well-circumscribed firm masses at the angle of jaw in 6 patients, which were mobile in the transverse plane. Two patients had large tumors extending to the base of the skull. There was no palpable bruit over any of the tumors. None of the patients had clinical evidence of a cranial nerve involvement.
The mainstay of final diagnosis was angiography, which was performed in all 8 patients. It showed a typical highly vascularized mass causing splaying of the internal and external carotid arteries. (Figure 1). 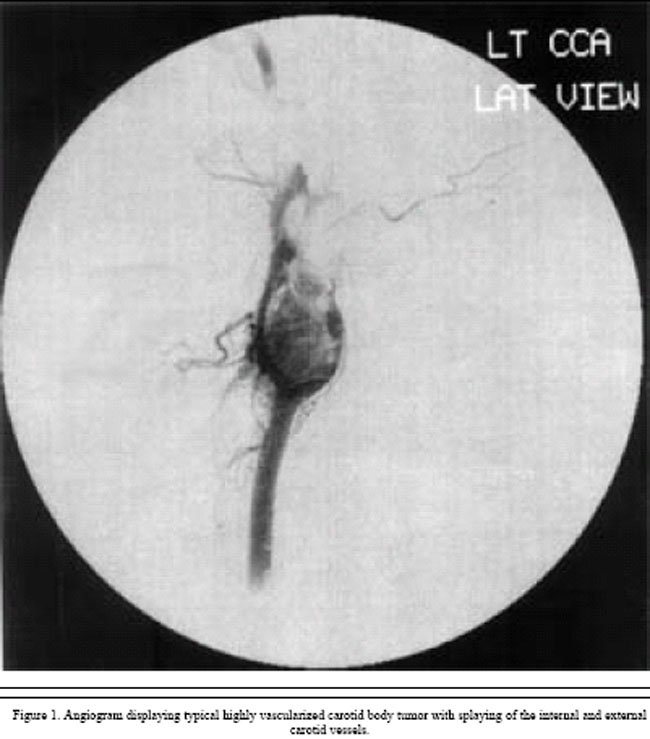 Duplex ultrasound was also performed in 4 patients before angiography. It showed typical features of a hypo-echoic vascular mass with low resistance arterial flow suggestive of the diagnosis .
In two patients CT scan of neck (base of skull) was performed to evaluate the extent of tumor. FNA was done in two patients, one out side AKUH and the other at AKUH; and at both occasions it was inconclusive. Tumor size reported in these patients with investigations ranged from 2x3 to 8x5 cms.
Pre-operative angio-embolization was done in three patients. The selection of the patients for embolization was random, and there were no definite criteria for this selection. Subjectively, pre-operative embolization was found to be very effective in reducing the vascularity of the tumor, and facilitated surgery. (Figure 2). 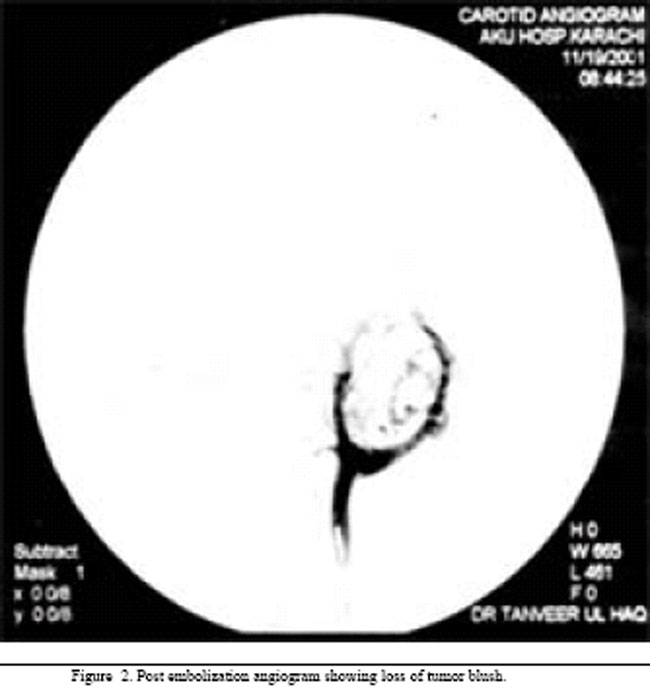 Objectively, it was not possible to compare the estimated blood loss during the surgery in patients who underwent pre-operative embolization as compared to those who underwent surgery without embolization, as this was a retrospective study and the relevant data was missing from the medical records. Surgery was performed within 24 hours of embolization in all three cases. No complication of the embolization was observed in any case.
Complete surgical resection was done in all 8 patients, using vertical incisions along the anterior border of sternocleidomastoid muscle in 7 cases and transverse incision in one case. Proximal and distal control of large vessels was achieved by using vascular slings. The hypoglossal and vagus nerves were identified and preserved. Peri-adventitial plane (Gordon Taylor's plane) was then identified and resection of the tumor was done. In 4 patients, the tumors were large and encircling the major vessels. Out of these 4, the external carotid arteries were ligated and divided in three cases, while in one case a segment of the internal carotid artery was excised and then reconstructed with a graft. In 3 patients enlarged lymph nodes were found per-operatively and these were removed. Histopathology revealed only reactive changes in all the three cases. Closed suction drains were placed in all the patients at the end of the procedure. Only one patient required blood transfusion per-operatively.
There were no peri-operative strokes or death in these patients. Transient nerve palsies involving 7th and 12th cranial nerves were noted in three patients, but all recovered spontaneously. One patient had permanent unilateral vocal cord palsy resulting in hoarseness of voice. All the patients were discharged home between 48 to 72 hours after the surgery. Median follow-up duration was 1 year with a range from 8 weeks to 3 years. Although it would be meaningless to draw any conclusions regarding the recurrence of the tumor due to such a short follow up, nevertheless, none of the patients had any recurrence during this period.

Objectives:
To review the presentation, management and outcome of carotid body tumors at a University Hospital in Karachi.
Setting:
The Aga Khan University Hospital, Karachi - a tertiary care hospital in Pakistan.
Method:
The medical records of all the patients who were admitted between 1st January1991 to 1st January 2002, with a diagnosis of carotid body tumor and underwent surgical resection, were identified using the ICD-9-CM coding system. The variables reviewed included demographic features, clinical presentation, diagnosis, management and outcome. The data was analyzed using the student t-test for continuous variables and the Fischer Exact test for categorical data, with computer-based SPSS version 10 software package.
Results:
A total of 8 patients with 8 carotid body tumors were treated surgically during the study period of 11 years. The study group consisted of 6 males and 2 females with a median age of 46 years (range: 26-68 years). All the eight patients presented with a history of neck mass which was progressively increasing in size. Physical examination revealed well-circumscribed firm masses at the angle of jaw in 6 patients. The other two patients had large tumors extending to the base of skull. The mainstay of final diagnosis was angiography, which was performed in all 8 patients. Pre-operative angio-embolization was done in three patients; followed by complete surgical resection in all 8 patients. There was no peri-operative mortality or stroke in these patients. Transient nerve palsies involving 7th and 12th cranial nerves were noted in three patients. One patient had permanent unilateral vocal cord palsy resulting in hoarseness of voice. Median follow up was 1 year with range from 8 weeks to 3 years; none of the patients had any recurrence during the follow-up period.
Conclusion:
Surgical resection of the carotid body tumors can be performed in suitable patients without major morbidity and mortality. There is a small but definite risk of neurologic complications, which should be clearly explained to the patients. Pre-operative angio-embolization facilitates surgery and reduces operative complications (JPMA 53:306;2003).