Anorexic behaviour causes significant physical and psychological stress in a large number of adolescents and young adults throughout the world. This clinical condition involves symptoms such as binge eating, purging and a constant preoccupation with food and body image. Individuals may engage in severe dieting behaviour, experience extreme guilt after eating and feel terrified of being overweight. They may actually feel as though food controls their lives.
Anorexic behaviour has been found in multiple studies to precede or actually be an indicator of anorexia nervosa, an eating disorder involving weight loss severe enough to cause significant physiologic consequences. Subsequent malnutrition leads to protein and nutritional deficiencies and disruption of multiple organ systems, with mortality rates ranging from 5-10%1. Early recognition of anorexia nervosa has favorable implications on the clinical outcome of the disease. For this reason identifying anorexic behaviour is a vital exercise if the burden of anorexia nervosa js to be reduced.
Research has disclosed a significant cultural effect on the pattern and distribution of the eating disorders. An important determinant appears to be the Western premium of thinness as an esthetic and moral value2-4. A high prevalence of eating disorders has been reported from many non-Western societies and several ethnic minorities in the United States,’ but their presenting features often differ somewhat from the DSM-IV criteria for anorexia nervosa and bulimia nervosa2. With the advent of satellite television and growing Western trends in our society, we hypothesized that we might establish results comparable with Western data, indicating that anorexic behaviour poses a significant burden on our population as well.

We conducted a cross-sectional survey to determine the prevalence of anorexic behaviour among female medical and nursing students at The Aga Khan University Hospital Karachi. Our study population included 509 female students from the Medical College and the School of Nursing. Out of 509 students, 185 were enrolled at the Medical College while the remainder belonged to the School of Nursing. A number of the students reside in Karachi and commute to and from the University every day, while the remainder, with families settled in other cities of Pakistan as well as abroad, live at the University Hostel.
We assumed the prevalence of our study variable, anorexic behavior, to be 12% as depicted by Martinez et al. who utilized the EAT-26 survey to identify anorexic behaviour among high school girls5. With a confidence interval of 95%, a sample size of 168 was calculated. Adding an extra 10% to counter the biases, refusals and wrong answers, we aimed to achieve a total sample size of 185 but only 180 survey forms (duly filled in) were obtained.
We utilized a multi-staged sampling technique in which the study population was first divided into two clusters according to their school (medical or nursing) and then stratified by class. Thus we collected our sample data from nine strata; five from the Medical College (first year through fifth year) and four from the School of Nursing (first year through fourth year). Within each stratum, we used convenience sampling due to time and availability constraints.
Data was collected using a modified version of the Eating Attitudes Test (EAT-26)5. EAT-26 has not been established as the sole mean of identifying eating disorders, but studies have shown that it can be used as a screening instrument in part of a two-stage process in which individuals who score above 20 are evaluated for eating disorders in a diagnostic interview. In this manner, early identification of an eating disorder can lead to earlier treatment thereby reducing morbidity and mortality.
The EAT-26 survey comprised of three sections (A, B, and C). Section A dealt with demographics, Section B contained 26 questions relating to eating attitudes and was used to calculate the score by addition of the values of the responses. Questions assessed various aspects of distorted eating behaviour, including bulimic tendencies, body image perception and degree of willful control over eating behavior. A score above 20 for Section B was considered diagnostic of anorexic behaviour. Section C consisted of specific questions regarding weight, height, psychiatric issues and menstrual irregularities. For the purpose of our study, we modified Section A so that the questions relating to demographics pertained to our study population. We also added a Section D that dealt with factors we hypothesized were associated with anorexic behaviour in our target population. These included: living in the hostel, having friends who went on diets, stress related reduction in food intake, influence of media on the way students desired to look, pressure from parents or siblings to lose weight, the presence of family conflicts, having feelings of self-worthlessness or guilt and having been to a psychiatrist for reasons other than eating behaviour. 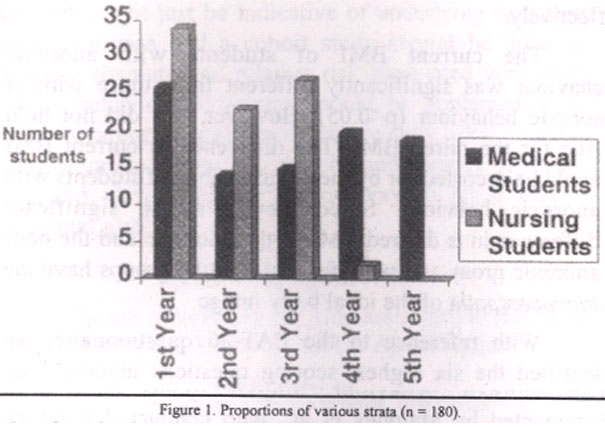 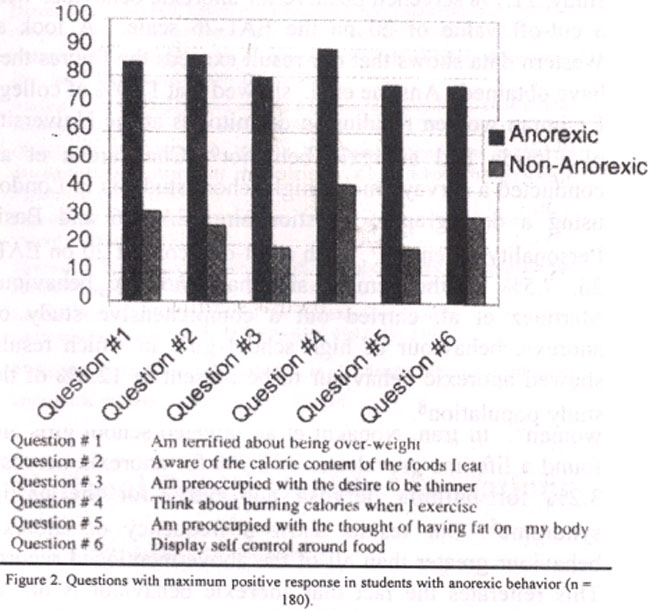 A Chi-square test was applied to all of the factors we hypothesized to be associated with anorexic behaviour. These factors included living in the hostel, having friends who went on diets, stress related reduction in food intake, influence of media on the way one desired to look, pressure from parents or siblings to lose weight, the presence of family conflicts, having feelings of self-worthlessness or guilt, and having been to a psychiatrist for reasons other than eating behavior. Of all these factors, a statistically significant value was found only for the last mentioned risk factor, that is, consulting a psychiatrist for reasons other than eating behavior (X2=8.142, df =1).
In order to determine the relevance of the relationship between current and desired BMI and anorexic status, a t-test of independent sample was carried out. It was found that the current BMI of those with anorexic behaviour was statistically different from those without anorexic behaviour (p < 0.05). However, this did not hold true for desired BMI.

Anorexic behaviour, which precedes anorexia nervosa, has been studied by various centers in an effort to recognize anorexia nervosa in its preliminary stages. The premorbid condition comprises of the attitudes towards eating seen in anorexia nervosa as well as other psychiatric symptoms. These include markers such as low self-esteem, depression, identity conflicts and high anxiety levels.
Of the total 180 female students included in our study, 2 1.7% screened positive for anorexic behaviour with a cut-off value of 20 on the EAT-26 scale. A look at Western data shows that our result exceeds the figures they have obtained. Anstine et al. showed that 17.0% of college freshman women residing in dormitories at the University of Florida had anorexic behavior6. Chandarana et al. conducted a survey among high school students in London using a demographic questionnaire, EAT-26 and Basic Personality Inventory7. With a cut-off score of 20 on EAT-26, 7.5% of the sample size had anorexic - behaviour. Martinez et al. carried out a comprehensive study on anorexic behaviour of high school girls in which results showed anorexic behaviour to be present in 12.8% of the study population8.
Interestingly, Sjostedt et al showed that Indian women scored higher on EAT-26 as compared to Australian women9. In Iran, Nobakht et al. targeted school girls and found a lifetime prevalence of 0.9% for anorexia nervosa, 3.2% for bulimia nervosa and 6.6% for the partial syndrome5. Our results show a frequency of anorexic behaviour greater than all of the above-mentioned reports. This reiterates the fact that anorexic behaviour is not an entity, which could solely be attributed to the Western society; the lack of data from the developing world, however, may have left this false impression.
One interesting feature in our study was the comparison between medical and nursing students. We hypothesized that since both groups of students belonged to nearly same age group (mean age 20.8±2.12), there would be no significant difference between their eating behaviour and attitude. However, we found a significant difference between the two groups with regards to the proportion of anorexic behavior (X2=23.44, df=l). Any suitable explanation for this difference, however, could not be generated.
Lanzi et al pointed out an association between distorted attitudes towards weight, body and food with disturbances of body image among students of Pavia, Italy10. They also showed a correlation between abnormal eating behaviours and a low level of self-esteem, suicide attempts, and drug abuse. In our study, consulting the psychiatrist for reasons other than eating disorders was the only çactor shown to be significantly associated with anorexic behaviour (X2=8. 142, df=1). This indicates that individuals with anorexic behaviour may have other psychiatric complaints, that need to be evaluated. Perhaps the presence ,of,certain psychiatric illnesses predisposes one towards the development of anorexic behaviour. However, our questionnaire could not evaluate this relationship effectively.
The current BMI of students with anorexic behaviour was significantly different from those without anorexic behaviour (p<0.05). However, this did not hold true for the desired BMI. The difference in current BMI could be accounted for by the dietary habits of students with anorexic behaviour. Since there was no significant difference in the desired BMI of the anorexic and the non­anorexic groups, we can infer that the two groups have the same perception of the ideal body image.
With reference to the EAT-26 questionnaire, we identified the six highest scoring questions among those with anorexic behaviour. Similar trends have been documented by Maloney et al., who conducted a survey among school going children between grades 3 through 6 in Ohio11. He showed that 45% of the children wanted to be thinner, 37% had already tried to lose weight, and 6.9% scored in the anorexia nervosa range.

Our sample was drawn from one medical university due to the limited time available to conduct our study. Thus, our results may not be truly representative of the female healthcare student population. Certain subsets of students in our target population were unavailable due to electives or vacations, so their surveys were administered to students from other classes. For this reason, the number of students sampled from each strata of our population is not exactly proportionate to the study population.

Anorexic behaviour emerged as an important premorbid entity in our’ defined population. A 21.7% prevalence of anorexic behaviour is higher than that found in similar studies conducted elsewhere. We also found that the proportion was much higher ‘among female nursing students as compared to female medical students. A previous visit to a psychiatrist for reasons other than eating disorders was found to be associated with anorexic behaviour. The target population for our study belonged to a selected stratum of the society (high socio-economic class), so the results cannot be extrapolated to the general population.

Measures need to be taken to identify this pre­morbid condition to , avoid undesirable outcomes. Other psychiatric illnesses that are, more relevant to our society i.e. major depression and anxiety disorders should be evaluated ‘in context of anorexic behaviour and should there be a causal relationship then it must be duly addressed. Anorexic behaviour might just be indicative of underlying or future anorexia nervosa and a cohort study should be done to illuminate absolute and relative risk associated With such anorexic behaviour. Programs should be implemented to increase awareness regarding necessary daily caloric intake, impact of undue dieting and exercise and normalcy of body shape and weight. Media is one way to realize these educational goals.

We are grateful for the kind assistance extended to us by Mr. Hamza A. Rasheed and Dr. Ajmal Agha.