The Utilization of Services of Health Care Providers among Patients presenting to Family Physicians at a Teaching Hospital in Karachi, Pakistan

Objective: To study the utilization of services of Health care providers among patients presenting to Family Physicians in a teaching hospital in Karachi.
Methodology: It was a cross sectional study. A questionnaire was developed to collect patient’s utilization of services of health care providers. The investigators administered the questionnaire to 387 patients, after purpose of the study was explained, written consent was taken and confidentiality was assured.
Results: The study population included more females than males, with average age of 32.6 years. The majority were married, well educated, in private and government service, were students or housewives. We found that 383(99%), 141(36.4%), 88(22.7%) and 45(11.6%) of the respondents had used services of allopaths, homeopaths, hakims and spiritual healers respectively. It is important to consider that these patients had come for allopathic treatment, thus exhibiting preference for it. The five main ailments for consulting health care providers differed, suggesting the perception in the mind of patients that certain ailments are better treated by particular system of treatment than the others. Studies are needed to explore this area further. The main reasons for consultation with particular health care provider were the recommendation of others or the perceived effectiveness of the practitioners. The reasons cited for non-consultation with health care providers were the lack of belief in them or lack of effectiveness of their treatment.
Three hundred seventy nine (98%), 259 (67%), 174 (45%) and 249 (64.4%) of patients were willing to consult allopaths, homeopaths, hakims and spiritual healers again respectively, if unwell in future.
Conclusion: We found a substantial utilization of services of complimentary medicine practitioners among the utilization and organization of services offered by patients seeking allopathic treatment. Further study on health care providers is required (JPMA 52:269; 2002).

“Allopathic Medicine” is the conventional medicine. “Complementary Medicine” are practices used with conventional Western medical treatments and “Alternative Medicine” includes practices used instead of Western medical treatments1.
It is said that Medicine is losing its holistic perspective as a result of which many people now seek help from ‘alternative’ practitioners who seem to devote time to their patients and listen to their concerns. The use of complementary therapies is, therefore, increasing world­wide. The important question is whether this increase truly reflects dissatisfaction with traditional (allopathic) medicine or rather represents an increased satisfaction with alternative therapies2.
Much attention is given to alternative and complementary therapies by the media and patients. Well over 40% of the population of United States of America uses some form of unconventional (not allopathic or osteopathic) medical care3. It has been extrapolated that in 1990, about 60 million Americans used alternative medical treatments, at an estimated cost of $13.7 billion’. Although Western medicine has tended to ignore other systems of preventing and treating disease and illness, practitioners of these systems serve more of the world’s population than do allopathics4.
There are reports that complementary and alternative medicine(CAM) is becoming more popular and CAM remedies are used instead of, or integrated with, orthodox allopathic therapies by many patients with asthma. Although most CAM approaches are harmless, the lack of benefit of many remedies and the potential harm from some of them must be recognized5.
A model of cooperation between allopathic and complimentary medicine in a primary care setting, has been tried within the National Health Service, in the United Kingdom. Claims have been made for the copying of the model elsewhere6. It has been reported that patients undergoing both allopathic and alternative treatment simultaneously often do not trust their allopathic physicians enough to discuss their alternative treatment7.
In rural Tanzania, dissatisfaction with state medical provision is not manifested in a rejection of the allopathic medicine with which it is associated, but in increase reliance on an emerging informal sector of private medical provision8. In India, the use of ayurvedic medicine differed from the allopathic, with the former more acceptable to the most culturally conservative. Rejection of allopathic medicine tended to be associated with a highly systematized religious world-view9. In Urban squatter settlements of Karachi, the efficacy of allopathic care has been rated very high, in the treatment of childhood pneumonia10.
We therefore established the need to study the utilization of services of health care providers in Karachi.

It was a cross sectional survey. After literature search and feedback from colleagues, a questionnaire was developed to collect patient’s utilization of services of Health care providers.
Patients were selected by convenience sampling. The study investigators administered the questionnaire to a patient who agreed to participate in the study after its purpose was explained. The participating patient signed a consent form and assurance that confidentiality will be maintained. We were able to administer the survey questionnaire to 387 patients, visiting the Family Physicians, at the Family Practice Center of The Aga Khan University in Karachi.

The cross sectional survey covered 387 respondents; 219(57%) were women while 168 (43%) were men, mean age was 32.6 years, majority were married, with education above intermediate level and were in private or government service or were housewives (Table 1). 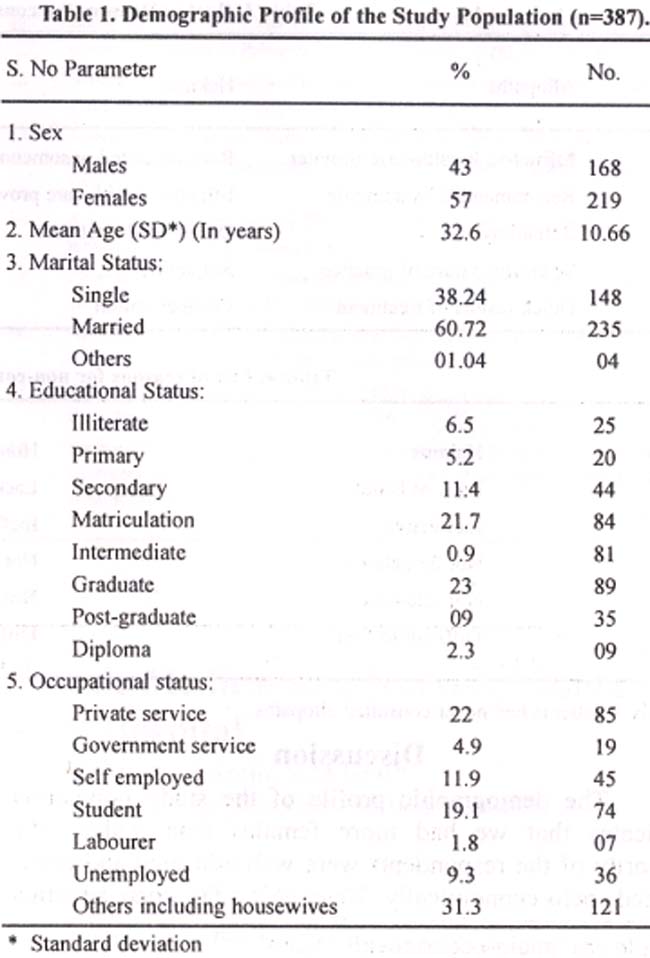 Flu/cough, fever, skin diseases and musculo-skeletal pain were the most common reasons for consulting an allopath, hakim, homeopath or spiritual, healer respectively (Table 2). 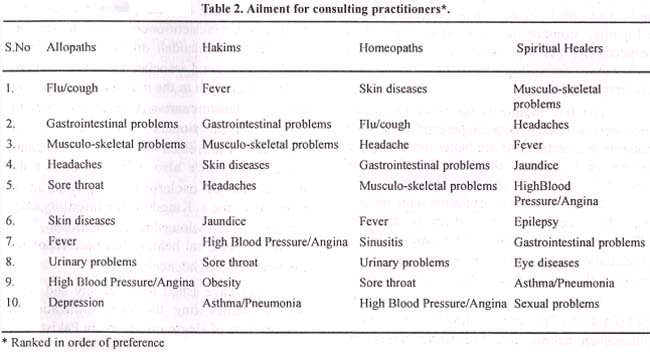 The reasons for non-consultation with hakims, homeopaths and spiritual healers was lack of belief in them (Table 4).

The demographic profile of the study population indicates that we had more females than males. The majority of the respondents were well educated and better placed socio-economically. We expect a far worse situation in the community where the level of education is low and people are socio-economically below par.
We found that 383 (99%), 141 (36.4%), 88 (22.7%) and 45 (11.6%) of the respondents had used services of allopaths, homeopaths, hakims and spiritual healers respectively. It is important to consider that these patients had come for allopathic treatment, thus exhibiting preference for it.
The five main ailments for consulting health care providers differed, suggesting the perception in the mind of patients that certain ailments are better treated by particular system on treatrnmnt than the others. Furiher studies are needed to explore this area at a greater length.
The main reason for consultation with other systems was the recommendation by others or the perceived effectiveness of the practitioners. The reasons cited for non-consultation with health care providers were the lack of belief in them or lack of effectiveness of their treatment.
Majority, i.e., 379 (98%), 259(67%), 174 (45%) and 249 (64.4%) of patients were willing to consult an allopath, homeopath, hakim and spiritual healer again respectively, if unwell in future.
We have found a substantial use of the services of complimentary medicine practitioners in our study population, even though they were interviewed while visiting to avail allopathic treatment.
In view of the concerns regarding effectiveness of the homeopathic system of treatment2,4 for example resulting in delay in allopathic treatment of cancer patients11, a regulatory body is required to oversee the practice of homeopathy. On the other hand, there have been studies suggesting acceptance of the homeopathic system of care both at the level of the physicians as well as the patients7,10. Hakim practitioners claim to treat different conditions. Unani Joshandah drugs are used for common cold, catarrh, cough and associated fevers12. Sangesarmahi, a Unani therapy is used in the management of urinary stone disease13. Treatment for sartan (Cancer) are also claimed by Unani medical practitioners14. Infectious diseases like Leprosy (Juzam) is treated in Unani medicine15. Unani system of medical care also offers remedies to alter the progression of atherosclerosis16. Spiritual healing is reported in the United Kingdom for infertility, pregnancy, labour and delivery, alongside conventional carers17. In Southeast Asia, spiritual healing has been reported for the treatment of drug dependence18.
We have established the necessity and recommend further studies regarding the need, utilization and the organization of Health care providers in Pakistan.