Retinal hemorrhages are relatively common ophthalmologic findings associated with many ocular as well as systemic disease processes. While identifiable ocular or Systemic disease is found in most instances, hemorrhage can also be found in apparently healthy individuals secondary to various forms of physiologic or environmental stress such as that associated with high altitudes, in the newborn, secondary to severe compression injury to the head or body (Purtscher’s Retinopathy). Spontaneous macular hemorrhages may also occur from increased intra-thorac ic or intra-abdom inal pressure, especially against a closed glottis as in severe coughing, retching or vomiting and as in bending or lifting heavy objects. Duane in 1972 described three patients with posterior pole hemorrhages, at least one of whom described bl}ny vision following a difficull intubation1,2.( We report a case of macular hemorrhage secondazy to difficult intubation.

A forty(year old female patient was refmrred to the Ophthalmology Service for the eviluation of bilateral eyelid ecc’ymoses and sub-conjunctival hemorrhage which she had developed three days previously during a difficult intubataon for status asthamaticus. The patient had not described any visual complaint during her stay in the emergency room prior to intubation and was not documented to be hypertensive at any point during her intubation. The patient had no medical and ophthalmic history. She was on proventil, theophyllin and 20mg gfprednisone on(an irregular basis.
Examination revealed a best(corrected visuad acuity of R.E:(20/60 -- ph -- 20/40 and L.E: 20/60 -- ph -- 20/25. The upper and lower eyelids on both sides were markedly ecchymotic with 360 degrees of sub-conjunctival hemorrhage OU (both eyes) (Figure 1). 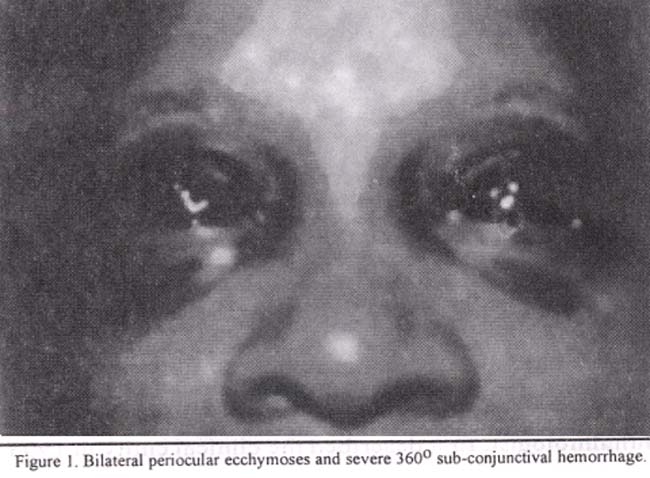 The intra-ocular pressure by applanation tonometry was 20 mmHg in both eyes. The pupils reacted well with no apparent pupillary defect. Dilated fundus examination revealed scattered intra-retinal hemorrhages OU with one in the macula of the right eye, (Figure 2). 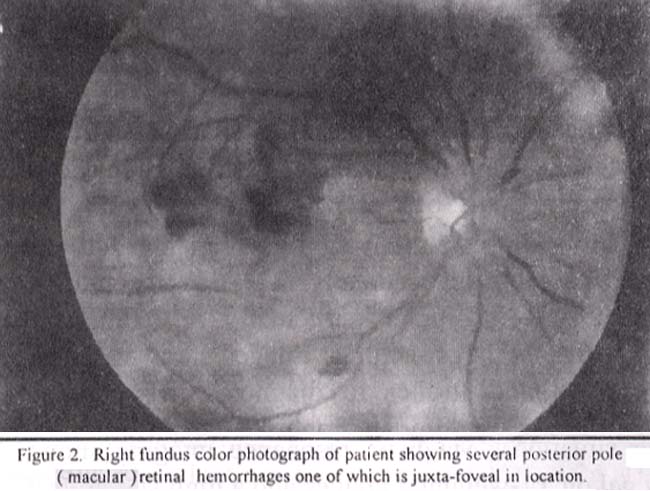 Laboratory tests including PT and APTT were normal. No  treatment was instituted and the hemorrhages resolved over the next few weeks with no recurrence.

Valsalva hemorrhagic retinopathy patients are usually young and may or may not provide a history of preceding Valsalva stress. Incomplete or absent venous valves in the head and neck region allow this increased pressure to be transmitted directly to the ocular circulation leading to the rupture of the superficial retinal capillaries. In those presenting with decreased visual acuity, 80% had a presenting visual acuity of 20/50 or better and 80% improved to 20/203 Gass described the classic dumbbell shaped sub-internal limiting membrane elevation at or near the macula4. The hemorrhages may however be oval or round shape as well and infrequently, a sub-internal limiting membrane hemorrhage may break through into the sub­hyoid space or into the vitreous cavity. Gass and also Goldberg et al.5 noted that sub-internal limiting membrane hemorrhages may also occur in families, transmitted as an autosomal dominant trait, with recurrent hemorrhages occurring with or without Valsalva stress. Other associations include thrombocytopenia or abnormal platelet function. Pruett,3 in his report of twenty patients of hemorrhagic retinopathy showed that 3/9 patients who were tested for platelet function studies demonstrated abnormal platelet aggregation and that 4/11 untested patients were ingesting medicines known to impair platelet function6. The true incidence of retinal hemorrhage secondary to intubation is unknown since only posterior pole hemorrhages would cause symptoms. Use of aspirin or the presence of platelet aggregation abnormalities may be contributory. Difficult intubations are not uncommon in an emergency room setting, often in severely ill patients. We documented this case as another presentation of decreased vision secondary to posterior pole hemorrhage.