Takayasu’s Arteritis is a chronic, idiopathic, inflammatory disease that primarily affects large blood vessels such as aorta and its branches.1 Neurological symptoms occur in about 50% of cases but stroke occurs in about 10% of patients with Takayasu’s Arteritis2. We report two such cases and emphasize the need for thorough evaluation of young patients with stroke to establish the underlying etiology.

A nineteen year old right-handed girl presented to the emergency room on 11/6/1997 with a two day history of sudden onset right-sided weakness and inability to talk. She denied any history of headaches, trauma or visual symptoms but vomited thrice on the day of presentation. There was no history of rheumatic fever or valvular heart disease. Her past history was significant for an episode of right hemiparesis, diplopia, dizziness and blurring of vision three years back, She was treated with steroids and recovered completely.
Fler examination revealed pallor and a left carotid bruit in addition to the neurologic deficits, which included expressive aphasia, right hem iparesis (face=arm>leg), right hyperreflexia and extensor plantar response on the right.
Base line investigations revealed mild hypochromic microcytic anemia, mild neutrophil leucocytosis, normal prothrombin time, activated partial thrombin time and platelet count. Her anti-nuclear antibodies (ANA), anti-double stranded deoxy ribonucleic antibodies (anti-DNA) and anti phospolipid antibodies were negative and erythrocyte sedimentation rate (ESR), protein C, protein S and antithrombin Ill (AT-Ill) were within normal limits. Magnetic resonance imaging (MM) of the brain showed new left basal ganglia and left parietal lobe infarctions and there was also evidence of an old pontine infarction. The echocardiogram was normal but Carotid Doppler study revealed an adherent thrombus in left common carotid artery. She was initially anticoagulated. Later a magnetic resonance angiography of the head, chest and abdomen was carried out, which showed occlusion of left common carotid and left subclavian arteries at their origins (Figure 1) 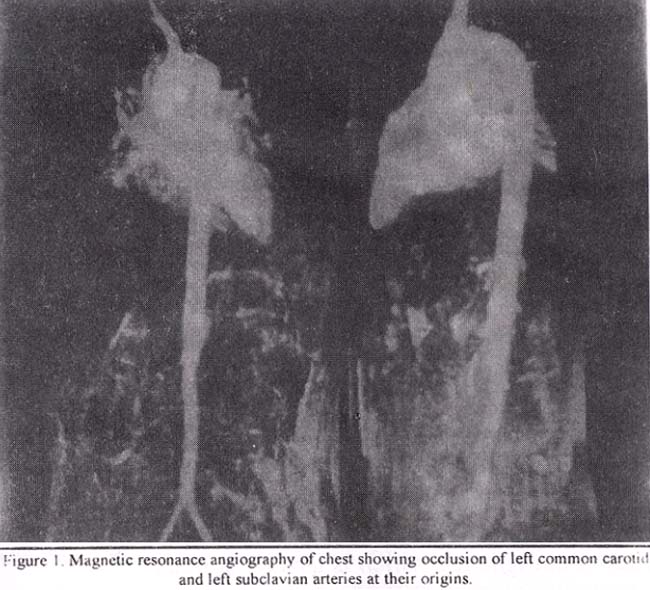 and eccentric narrowing of abdominal artery at the level of the renal artery (Figure 2). 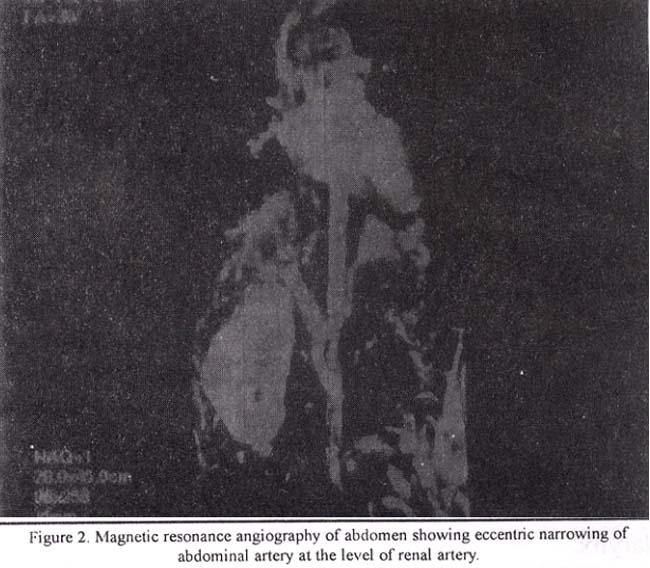 She was started on prednisone. Initial dose was 60 mg daily for 8 weeks and then the dose was tapered down. Currently she is taking 10 mg on every other day. She was followed up for 4 years and had not relapsed till her last visit. Her recovery, at the best, was partial.
Case 2
A thirty-six year old right-handed lady was referred to the neurology clinic for evaluation of left hemiparesis. Her weakness was sudden and resolved over few days. Her history was also significant for chronic neck pain (which radiated to both arms predominantly on left side along with numbness), low grade fever for four weeks, generalized bodyaches, moderate headache, photophobia and occasional joint pains.
On examination she looked ill and pale. Her left arm was cold with weak pulses. No abnormality was detected on chest and abdominal examination. Neurological examination revealed subtle left hemiparesis. Investigations were significant for high erythrocyte sedimentation rate (81 mm 1St hour) and mild normochromic and microcytic anemia. Angiography of the arch of aorta (Figure 3) 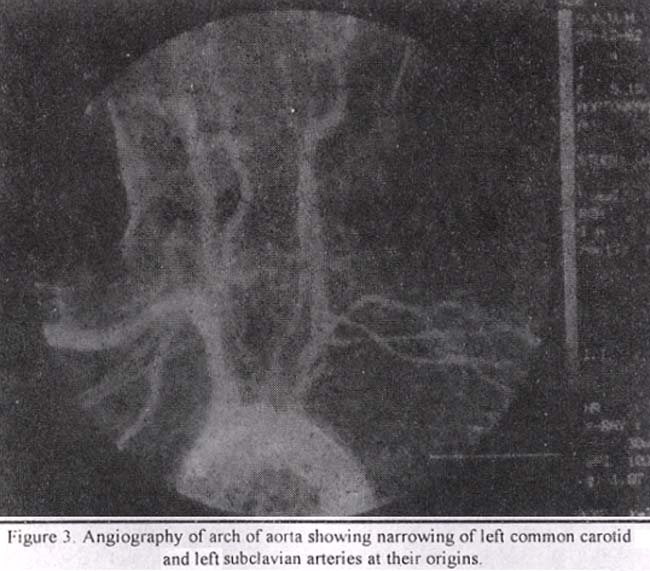 was consistent with Takayasu’s Arteritis. She was treated with high dose prednisone and would become symptomatic every time the steroids were tapered. The symptoms included joint pains, neck pain, generalized body ache and malaise. She was also given methotrexate but did not tolerate. Her follow up period was three years and lately she was taking 30 mg of prednisone on every other day.

Takayasu’s Arteritis is a chronic, idiopathic, inflammatory disease that primarily affects large blood vessels like aorta and its branches1. Takayasu, a Japanese ophthalmologist, first described the clinical entity in 1908 in a young female with retinal changes3. Latter Shimzu and Sano, in 1928, described it as pulseless disease3. Its estimated incidence is 2.6/100,000,0/year1. The disease has worldwide distribution but is more common in Japan, India and China2. It affects predominantly females, with a male to female ratio of 1:9 but the difference is much less pronounced in India, where the male to female ratio is 1:1.5-32. Pathogenesis of the disease remains elusive but there is an indirect evidence of an autoimmune process. Some association with sarcoidosis and inflammatory bowel disease has also been noted2,4. Certain HLA antigens, like HLA-Bw 5 and B 21, are also more common in patients with Takayasu’s Arteritis as compared to the general population2. Takayasu’s Arteritis has a variable presentation. About 15-50% of the patients have nonspecific symptoms like fever, malaise, mylagia, weight loss and arthralgiaL2. One third of the patients are anemic and 10-30% have various cardiac symptomsL2. It is the most common cause of renovascular hypertension in India2. About half of the patients have neurologic symptoms, the most common being visual symptoms2. Strokes occur in 10% of the patients2. The most common presentation is hemiparesis and hemihypesthesia while the commonest sites of involvement are the basal ganglia and watershed zones5.
Our first patient had visual symptoms in the past while the second had nonspecific symptoms for one month. Both patients had hemiparesis due to stroke. The first patient also had aphasia. Basal ganglia were the site of infarction in the first patient while imaging was not performed in the second patient. Young patients (less than 45 years) account for approximately 5% of stroke cases6.
Common causes are cardio embolic and carotid dissection but in our part of the world tuberculous meningitis and venous sinus thrombosis are also common underlying factors. In various series of young strokes, different kinds of vasculitides account for 0-19% of all strokes5.
Diagnosis is based on clinical features and angiographic findings2. The American College of Rheumatology criteria l9907 has commonly been accepted for diagnosis of Takayasu’s Arteritis, However, recently improved criteria have been put forward3. These revised criteria are considered to be more sensitive and specific. Our first patient would have been missed based on the American criteria.
The mainstay of therapy is immunosuppression. High dose steroids are the drug of choice but relapses are as common as 50%, with median period of remission about 22 months1. The patients who relapse respond to various immunosuppressive agents like methotrexate and cyclophosphoamide, with a response rate and remission period similar to that of steroids. Some patients need surgical intervention. Indications for surgery include uncontrolled hypertension secondary to renal artery stenosis and symptomatic carotid artery disease.
Prognosis is fairly good, with a ten-year survival rate of around 90%. Severe hypertension and cardiac failure are bad prognostic factors. Takayasus Arterilis should be considered as a possibility in all young patients (specially females) who present with stroke as this is fairly responsive to medical management. This is necessary to prevent any further systemic complications, which may be devastating.