Squamous cell carcinoma of true vocal cords is the most common tumor in all laryngeal cancers1. Its distant metastasis is uncommon due to anatomical structure, lymphatic drainage and poor blood supply2. Incidence of distant metastasis is also low due to diagnosis of tumor in early course of disease; even slight alteration on the surface of the vocal cords produce voice changes1,3.

In December 1999, a 38 year old male was referred to us as a diagnosed case of Squamous cell carcinoma of True vocal cords (Glottic) region (Figure 1). 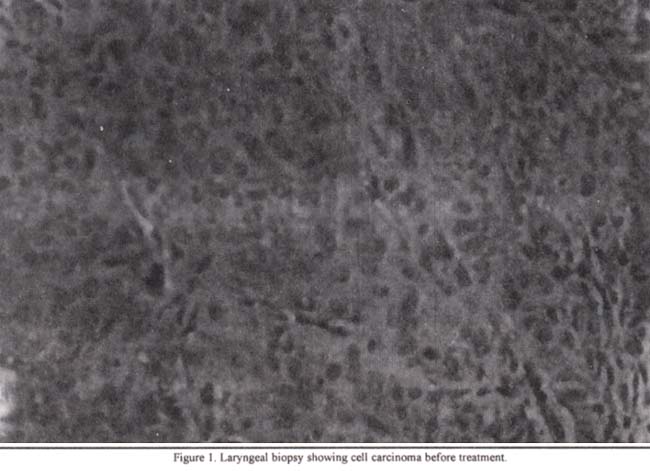 After initial work-up including CT Scan, X-ray chest, U/S whole abdomen; the stage of disease was labeled as TI NO MO / Stage I. The plan of treatment was decided by radical radiotherapy (cobalt). Total became productive. For this complaint he went to the chest physician who advised him an X-ray chest; which showed multiple well-defined opacities with cavitation in upper lobe of right lung (Figure 2). 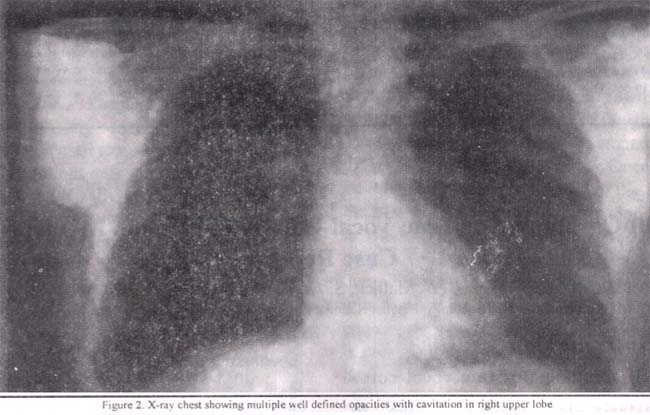 On the basis of the X-ray findings alone a diagnosis of Pulmonary Tuberculous was established and anti Tuberculosis treatment started. Despite 2 months of treatment he did not show a satisfactory response.
In January 2001, he came to oncology clinic for the above mentioned complaints. On the basis of history, clinical examination, X-ray findings and failure to treatment, an urgent CT Scan chest was performed which showed multiple well-marginated soft tissue densities in the right lung measuring 3.8 x 3.8cms in anterior segment of right upper lobe. The other two densities were lying in the posterior basal segment of right lung. No evidence of lymphoadenopathy was noted, (Figures 3, 4). 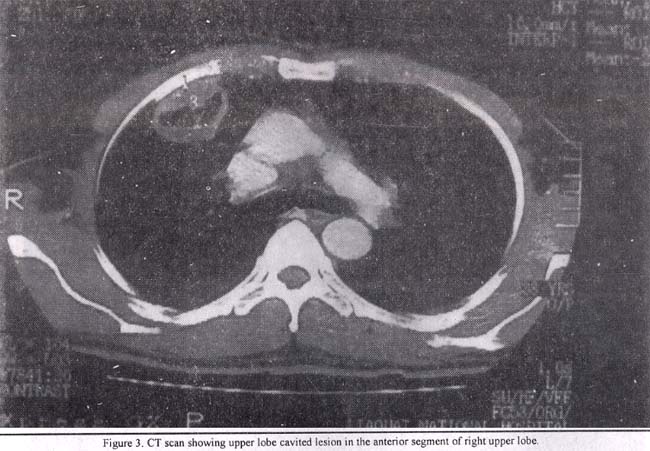 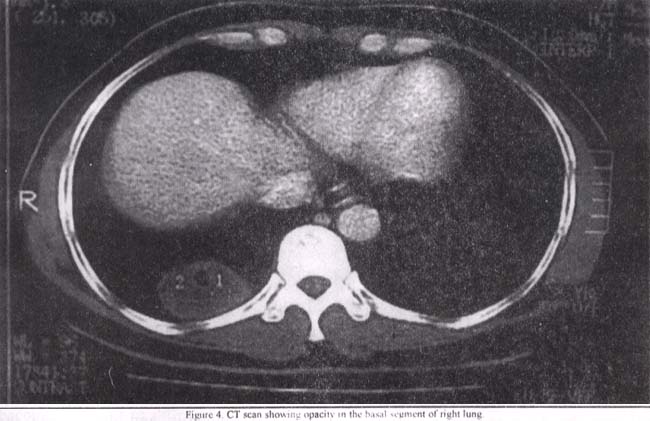 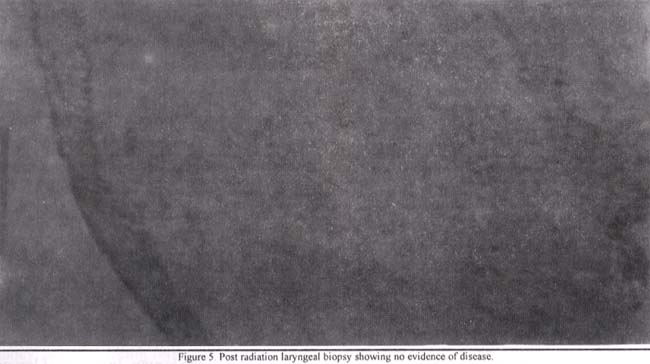 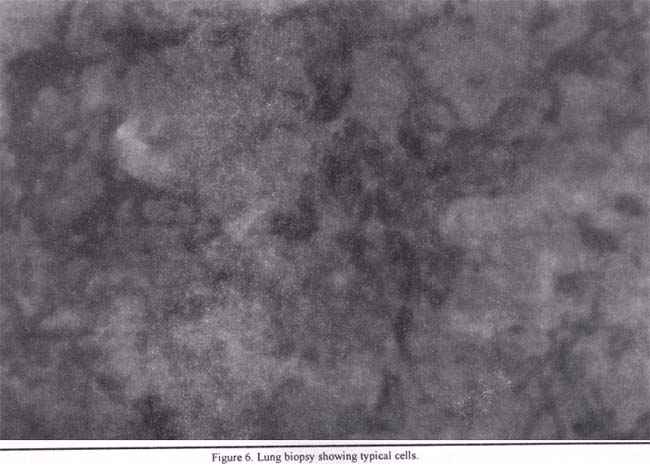 On the basis all investigations the stage of disease had been changed from Stage I to Stage IV. Therefore plan of palliative systemic combination chemotherapy comprising of Cisplatinum 75mg/m2 on day I and 5- Flurouracil 750mg/m2 from day 2-6, with each cycle to be repeated after every 3-4 weeks was decided. After at least 2 courses of chemotherapy the response of treatment would be assessed clinically and radiologically to decide the further plan of management.

True vocal cord carcinoma is the most common of all laryngeal cancers. It is rare before the age of 40 years1. Most of them occur on the anterior two thirds of the cord, a small percentage on anterior commisure and rarely on the posterior commisure. Their growth characteristics are determined by the unique anatomy of the vocal cords2. The sparcity of lymphatic drainage of the cord in all the areas other than posterior commisure makes metastasis of early lesions extremely unlikely3. The elastic layer within the larynx often diverts cancer that begins on the free edge of the cords and continues into the underlying vocalis muscle and paraglottic space, which is an inferiolateral pathway that leads out of the larynx through the cricothyroid space. With penetration into the underlying tissues, all degrees of motion impairment, from subtle mucous membrane stiffness to the frank fixation of the vocal cords can occur. The anterior commisure ligament forms the bridge between the anterior ends of the true vocal cords4. This structure lies immediately against the inner lamina of the thyroid cartilage and its presence usually retards the penetration of cancer of that area, often causing their diversion upwards onto the epiglottis and down onto the cricothyroid membrane. From there, these lesions can escape from the larynx into the neck. If the cancer overcomes the ligamentous barrier at the anterior commisure, the cartilage is penetrated2,3.
Glottic cancer is often detected early in the course of the disease because even a slight alternation of the vibratory surface of the true vocal cords produces a voice change. Most of them are visible with routine laryngeal inspection, but a small percentage are obscure. Flexible endoscopes have broadened the capabilities to examine the larynx4, Once the lesion is discovered, the evaluation of its depth, bulk and cartilage invasion and the status of the regional lymph nodes are enhanced by CT or MRI. The former effectively demonstrates the vertical extension of tumor, especially in the subglottic and anterior commisure areas while the latter offers the advantages of multiplane visualization of the larynx. Invasion of laryngeal cartilage is important in treatment planning5,6.
In early glottic cancer TI, radiation or partial laryngectomy achieves excellent local control. With radiation, the voice is unquestionably better. After this treatment the voice is normal or near normal most of the time. On the other hand, all the patients are hoarse to varying degree after hemilaryngectomy or cordectomy7. In most centers, majority TI glottic cancers are treated with radiotherapy and partial or total laryngectomy is used as salvage operation in those who fail to respond to radiotherapy. The actual survival results for Ti lesions treated by radiotherapy show local control of 91%. The local control with radiation alone in patients suitable for cordectomy was 97%. In both, local control increased to 100% when surgical salvage is added8,9.
Tumor carcinogenesis is postulated to require a cascade of genetic events. In head and neck cancer a definitive carcinogenic pathway has not yet been established. However, in formation is accumulating describing chromosome deletions, rearrangements, particularly on chromosomes 3p, 9p and l7p. Alternations of the retinoid receptors or the epidermal growth factor receptors have also been described. Although specific oncogene activation has been observed, yet to date a prevalent sequence of events has not been elucidated. Clearly genetic alternations have been seen at all stages and sites of this disease10.
One must also remember that second malignancy is quite frequent in laryngeal cancer ranging from 15-21%. Some time it becomes difficult to differentiate between a metastatic lesion and second malignancy following criteria may be helpful in differentiating this:
1.Metastasis usually occurs early and most of the time within a year while second malignancy usually takes longer period of time to occur.
2.The histology must be different from the primary lesion in second malignancy as compared to metastatic disease, where it should be identical to primary lesion.
3.Metastatic lesions are usually multiple as compared to second malignancy which is usually solitary.
In our case the lung lesion appeared early within 8 months and the lesions were multiple. Histology from the lesions did not show any evidence of bronchial origin. Therefore in view of the above, we consider that in our case the lung lesion some more likely to metastatic, rather than second malignancy, and thus being reported.
Staging system
Ti:    Confined to cords.
Tia:  Involving single cord.
T2b: Involving both cords.
T2:   Spread off the cord ± impaired vocal cords mobility.
T3:   Tumor limited to larynx with fixed cord.
T4:   Invasion into thyroid cartilage ± other tissue beyond the larynx.
Stage 0 Tis No MO Stages I-II have approximately a 70% (5 years) survival rate; Stages III and IV have less than 40% (5 years )survival rate and N3 nodal disease carries a <20% (3 years) survival rate11. 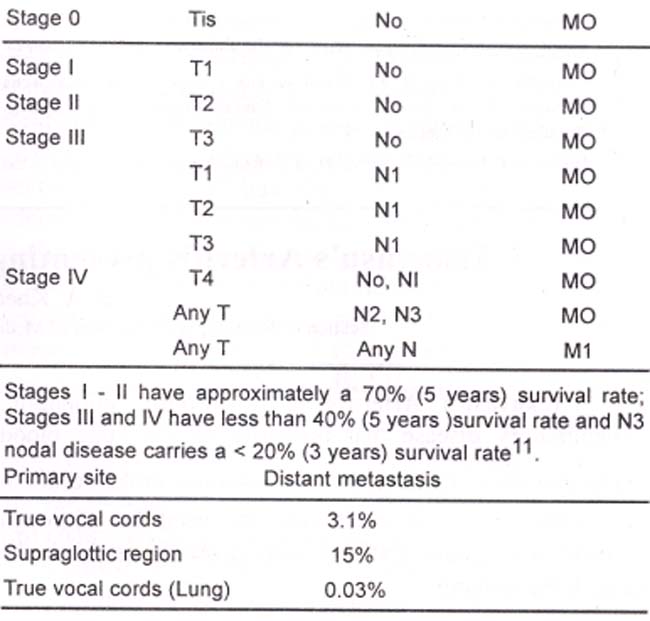 The lesion of the True Vocal cords usually does not metastasize due to sparcity of lymphatic drainage, anatomical barrier, presence of cartilage and poor blood supply in the region. Because of these the metastasis in Ti lesion is extremely rare (3.1%). Once the lesion extends to involve the surrounding structures (T2, T3), the lymph node metastasis increases (2.5%). Blood borne metastasis is extremely uncommon for the same reason but has been reported occasionally. This becomes more frequent when TI category of the tumor changes to T2 or T3 lesions.
Our case which has been presented also had Ti lesion and remained so till the metastasis occurred. These characteristics of true vocal cords tumor should be kept in mind.