The Role of HLA Antigens in Chronic Hepatitis B Virus Infection

Objective: To investigate the mechanism underlying the development of chronic hepatitis B virus infection (HBV) in Turkish population using HLA tissue typing.
Methods: The study group I consisted of 20 patients with HBV- related chronic liver disease (cirrhosis, chronic active hepatitis or chronic persistent hepatitis). The study group II included 30 HBV chronic carriers. The control group consisted of 50 healthy subjects with negative serologic markers for HBV. HLA typing was performed by Terasaki’s microlymphocytotoxicity method.
Results: The frequencies of HLA-DR13 and DQ3 were significantly higher in the patients with HBV-related chronic liver disease compared to those of control group. The absence of HLA-A24 and CW1 was also significant in group I. The frequencies of HLA A2, B8, B13, CW3, DR13 were significantly higher in group II compared to the control group. There were increased frequencies of HLA- B8, B13, DR7, DRI 3, and DQ3 in both group I and group II.
Conclusion: HLA-A24 and Cw1 were associated with low risk for HBV-related chronic liver disease and HLA­B13, B8, DR7, DR13 and DQ3 were associated with high risk for chronic HBV infection in the Turkish population (JPMA 52:253; 2002).

Hepatitis B virus (HBV) infection may result in a number of conditions from asymptomatic carriage to acute or chronic liver failure. About 20-60 percent of the Turkish population is infected with HBV likewise South-Eastern Europe, Middle East, Mediterranean Region, Central Asia, Japan and Southern America. In 2-7 percent of the infected people, virus is not cleared1,2.
The outcome of HBV infection can be determined by several factors like virulance of the viral strains and the host immune response. Variation in immune response is often associated with polymorphism of the major histocompatibility complex (MHC). Class I molecules of MHC include antigens encoded by genes in the HLA A, B and C loci, whereas class II molecules include those encoded by genes in the HLA D regions.
An efficient T-cell response to viral component is critical for protective irnmunitiy. The HBV is not a cytopathic agent. Inflammation and hepatic necrosis in HBV infection are assumed to result from the T lymphocyte response of host to viral antigens3. Antigen-specific T-cell receptors recognize peptides bound to HLA molecules and the repertoire of peptides bound, depends on the HLA type of the individual. HLA tissue typing has become a useful system for studying the role of genetic factors in various diseases. The role of the HLA types in the outcome of HBV infection has been previously investigated, but they were unable to reach a definite conclusion4,5. Different HLA types related to chronicity has been reported from different countries. It has been assumed that this difference could be due to racial characteristics.
The purpose of this study was to determine HLA tissue typing of the patients with chronic hepatitis B virus infection, to show the possible role of HLA tissue types on the chronicity of HBV infection and to assess which HLA types were protective against chronicity in Turkish population.

The frequencies of HLA A24, DR13 and DQ3 antigens were higher and of HLA CW1 antigen was lower in group I compared to control group (table 1). 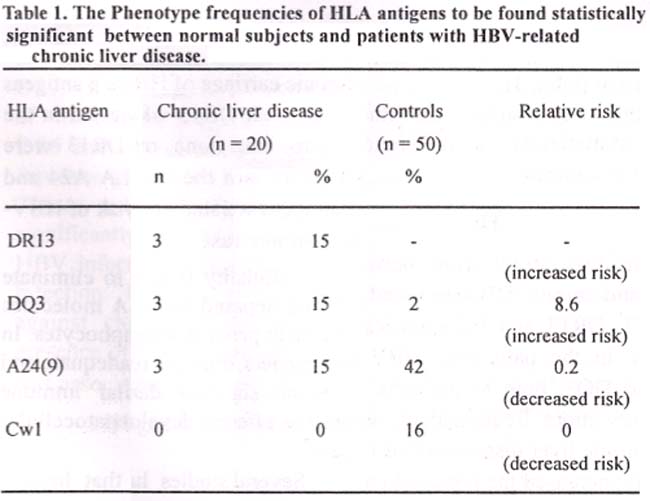 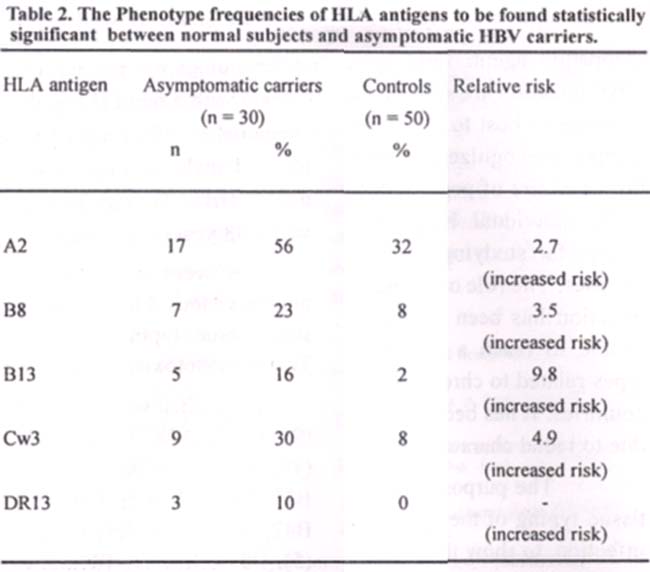 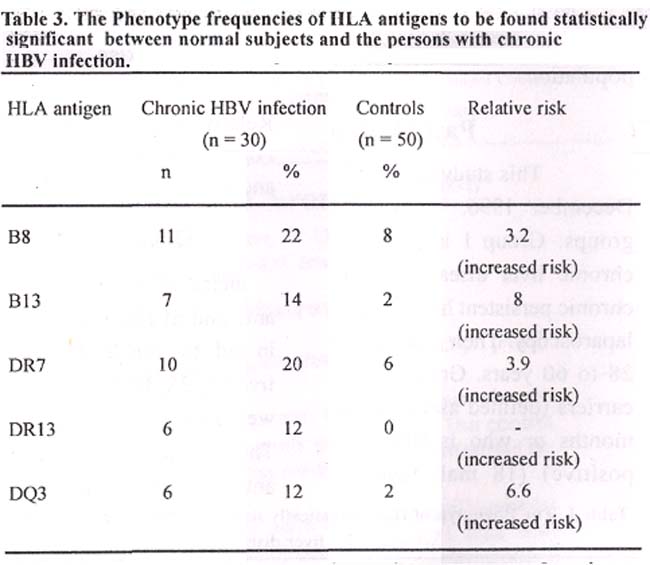 Other HLA antigens tested in the study groups showed statistically insignificant differences when compared to controls.

In this study, the association between HLA antigens and chronic HBV infection were noted. HLA B8, B13, DR7, DR13 and DQ3 appeared significantly more frequently in the patients with chronic HBV infection. DR13 and DQ3, both MHC class II antigens, are found significantly more frequently in the patients with HBV­related chronic liver disease. It is observed that HLA DR13 marginally increased the risks of HBV-related chronic liver disease and chronic carriage of HBV. There were 8 antigens in association with DR13 which were not detected in the control group, but none of these except DR13 were significantly increased in the study group. HLA A24 and Cw1 antigens were associated with decreased risk of HBV­related chronic liver disease.
Cellular immunity is very important to eliminate HBV from hepatocytes and some specific HLA molecules play a role in presenting viral antigens to T lymphocytes. In healthy carriers, cellular immune response is inadequate and there is no significant liver damage. Cellular immune response is effective in the development of hepatocellular necrosis7.
Several recent studies have shown that hepatic expression of HLA class 1 antigens were increased in chronic HBV infection. Interferon therapy has a similar effect8.
Protective HLA types against viral persistence have been studied. It has been reported that HLA B35 frequency increased in chronic HBV carriers. HLA A2, A26, DR2, DR4, DR5, DR8 and DQ1 prevented viral persistence5,9,10. Our results suggest that HLA A2, B8, B13, Cw3 and DR 13 are protective for chronic carriage of HBV. HLA A2 increased risk of chronic HBV carriage by 2.7 times and HLA A2 antigens showed linkage disequilibrium with B25, B46, CW1 10. The risk of chronic carriage in the presence of HLA B8 antigen was 3.5 times higher. HLA B8 antigen was frequently found together with Al and Cw7. In western population, HLA B8 antigen was higher in frequency in HBV carriers and chronic HBV infection11. Paterson reported that HLA B8 was found frequently in the patients with hepatocellular carcinoma12.
HLA B8 antigen was found in 22% patients with chronic hepatitis B infection and in 8% in the controls. These results correlate well with Sung’s and Paterson’s studies12,13.
Pol showed that frequency of HLA B8 antigen was higher in individuals who failed to develop antibody response after HBV vaccination14.
We observed that most risky antigen for chronic carrier state was HLA B13. HLA DR7 also increased the risk of chronicity by 3.9 times. Similar results were reported previously12,15,16. Weissman reported that frequency of HLA DR7 was higher in the individuals who were unresponsive to the hepatitis B vaccine17. In this study, we observed that HLA B13, DRI3 and DQ3 were the antigens associated with increased risk for chronic HBV infection15.
We found that HLA A24 and HLA Cwl were protective for HBV related chronic liver disease. HLA DR13 frequency was 15% in chronic liver disease, but none of the controls had the same antigen. DR13 is a split of DR6 and it shows linkage disequilibrium with B44 in Japanese population, it is also related with DQ6 as well. Thursz and collegues found that DRB1*1302 allele had significantly higher frequency in the patients who recovered I-IBV infection compared to those who had chronic HBV infection. They suggested that this allele was protective against chronicity. However, they also observed that presence of HLA DR13 which included DRB1* 1302 allele was associated with higher risk for chronicity18.
HLA DQ3 antigen was found to be associated with increased relative risk for HBV-related chronic liver disease in this study. DQ3 antigen has been found more frequently with DR 4, 5, 6, 7, 8, 9 and 10. It has been reported that DR 3, 4 and 5 frequency was higher in chronic HBV infection19,20. We found no significant difference in the frequencies of HLA DR3 and DR4 antigens between study and control groups.
HLA B35 frequency was high in chronic active hepatitis10. In this study HLA B35 frequency was higher in group I and II compared to controls, but this was not statistically significant.
Our findings suggest that the genes encoding the immune response of the host affect the clearance of hepatitis B virus and the outcome of hepatitis B infection.