Objective: To see the clinical features and treatment of children with Acute Myeloid Leukemia (AML) in Pakistan. Setting: Tertiary referral at a specialist Hematology/Oncology center.
Methods: Retrospective, chart-based review of children (less than 14 years) admitted to the hospital with a diagnosis of AML between January 1987 and August 1997.
Results: A total of 23 patients were admitted. There were 18 males and 5 females. The mean age was 8 5 years. M3 was the commonest morphological subtype (43%). Twenty- two percent of the patients presented with hyperleucocytosis (TLC> 100 x i09 /L) and 95% with an elevated LDH (>548 lUlL). Pneumonia at presentation was seen in 29%. Of 23 patients 14 were evaluable for responses. Six patients died early (43%); 3 before starting the chemotherapy and 3 during the induction chemotherapy, 8/11 (73%) patients entered remission. The median survival was 9 months.
Conclusion: The pediatric patients with acute myeloid leukemia present with advanced disease. There is a high early death rate (within 28 days of diagnosis). The long-term outcome was inferior to that reported in the literature (JPMA 52:247; 2002).

Acute leukemia is the commonest childhood cancer, however, acute myeloid leukemia (AML) constitutes only 15 to 20% of such cases1. Whereas, acute lymphohiastic leukemia (ALL) is curable in vast majority of cases2, the long-tere survivil of AML in chiddren is(only 30(to 40%,(even with curreft chemotherapy protocols and intensive supportie care3. I-lowevez these figures originatni from the data nrom a different background of patients,(where t’e biological nature of he diseise may also be different4. Furthermore, the nutritional and socio­economic circumstances of the children reported in those studies are different compared to our part of the world. Such factors are also known to affect the outcomes5. Information about the clinicopathological features of AML has started to emerge from the developing countries5-7. This report is a compilation of our experience over the past 10 years in a major hematology and oncology center in southern Pakistan.

The data were collected retrospectively. The clinical records of consecutive patients diagnosed to have AML between January 1987 and August 1997 and under the age of 14 years were retrieved by the medical record section. The diagnosis is logged on the face sheet of the medical charts by the attending physicians. The medical records department uses International Classification of Disease Version 9 database (lCD 9.0). The survival curve was generated according to the method of Kaplan and Meier8.

Over 10 years, a total of 281 patients under the age of 14 years were admitted to the hospital with an underlying diagnosis of acute leukemia. Of these, 258 were diagnosed to have ALL, whereas, only 23 were diagnosed to have AML. This gives a ratio of 11.2: 1. The patients diagnosed to have AML are the subjects of this study.
The mean age at presentation of these patients was 8 ±. 5 yrs. They were 1 8 males and 5 females, the ratio being 3.6: 1. Majority of patients presented with fever (n=19) followed by bleeding (n=10), anemia (n=8) and clinically documented infection (n=5). The mean duration of symptoms were 39, 20, 89 and 19 days respectively. 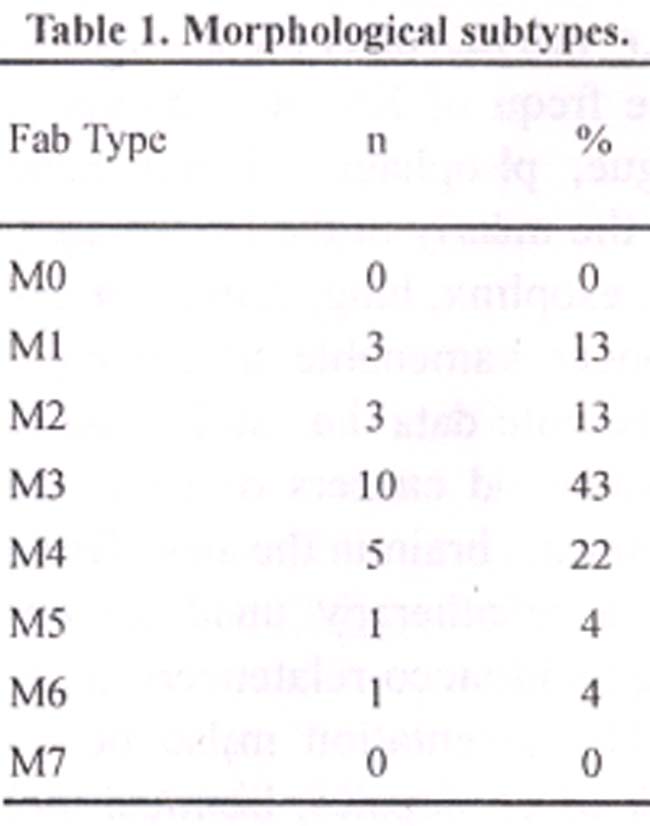 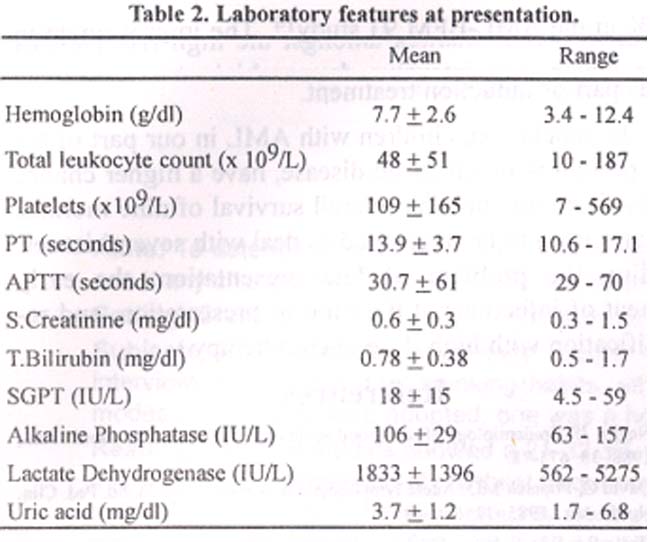 Table 2 shows various laboratory features at presentation. The mean hemoglobin at presentation was 7.7±2.6 g/dl. Ten patients (43%) had a hemoglobin of less than 7 g/dl. Mean total leukocyte count (TLC) was 48 ±51 x 109/L, 5 patients (22%) had hyperleucocytosis i.e. TLC more than 100 x 109/L. Nine patients (3 9%) presented with severe thrombocytopenia (platelet count of less than 20 x 1 09/L). Ten patients (43%) had coagulation abnormalities, 2 (8%) abnormal liver function tests and 95% presented with Lactate Dehydrogenase (LDH) levels in excess of 548 lU/L. The mean LDI-T was 1833 ± 1396 lUlL. The chest X-ray was available in 19/23 patients and signs of pneumonia at the time of presentation were present in 29% patients.
Fourteen out of twenty three patients (14/23) were evaluable for the follow up, the rest were either refered or got themselves refered out of the hospital for various reasons. Three patients died before they could be started on induction chemotherapy. All had clinically documented infection, fever and 2/3 had coagulation abnormalities. Nine patients were treated with standard induction chemotherapy regimens consisting of cytosine arabinoside 100 mg/m2 for 7 days and duanorubicin 45 mg/rn2 for 3 days. Etoposide 100 mg/m22 for 4 days was added to the regimen of I patient who had acute monocytic leukemia. Two patients with acute promyelocytic leukemia received induction treatment with All Trans Retinoic acid (ATRA) at a dose of 45 mg/m2 in two divided doses. In all, 39 cycles of chemotherapy were administered. The post-remission therapy consisted of two cycles of cytosine arabinoside 100 mg/m2 for 5 days and duanorubicin 45 mg/m2 for 2 days followed by 2 - 3 cycles of cytosine arabinoside 1.5 g/m2 12 hourly for 3 days. Febrile neutropenia necessitating hospitalization occurred in 18 instances following 39 cycles of chemotherapy (46%). The mean onset of neutropenia was 9+5 days from the start of chemotherapy and mean duration of the neutropenia was 8 ± 5 days. Granulocyte macrophage colony stimulating factor (GM-CSF) was used in 5 of these episodes.
Three patients died before they could be started on chemotherapy and 3 died during the induction phase. Eight treated with chemotherapy entered remission (73%). The disease status was evaluated on 3 1st December 2000. In all 13 patients have died, whereas, 1 was alive in complete remission at 30 months. This patient had received allogenic bone marrow transplantation in remission. The median survival for all patients was 9 months. (Figure). 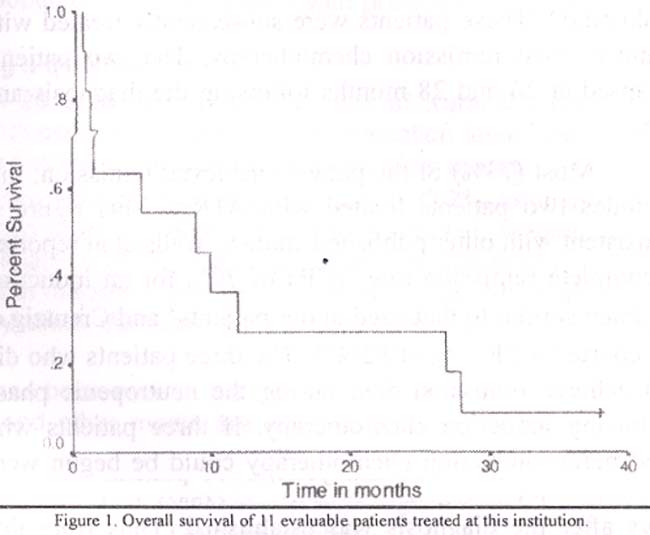 Over the past 10 years, AML was found to constitute 9% of all acute leukemias in children under the age of 14 years. This figure is at variance from the figures quoted in the literature, which suggest that AML constitutes 15 to 20% of acute leukemias in pediatric age group9,10. Zahid et al reported AML in 16% of all the leukemias in a study of 62 patients from Pakistan5. The commonest morphological subtype in our population was M3, which was seen in 10 patients. This is at variance again with the western figures quoted in the literature9,10. However because of small number of patients in our study, it may be difficult to comment whether this observation is significant or not.
Five out of 23 patients presented with hyperleukocytosis, which is known to be a poor prognostic indicator11. Of the six patients who died early, i.e. during the first 28 days of treatment, two presented with hyperleucocytosis. Majority (95%) of the patients presented with a high LDH, which is also an adverse prognostic sign. Taken together these findings show children in this study clearly presented with advanced disease and with poor prognostic features. The reasons for late presentation could be several but remain speculative. Bennett et a! have shown that Black patients present with advanced disease compared with the White because of financial reasons12. Similar factors are applicable in our patient population. Additionally lack of awareness of the severity of the disease and remoteness of specialist medical care could be the other reasons for late presentation.
The two patients with M3 subtypes were treated with all trans retinoic acid (ATRA) till achieving complete remission. ATRA induces remission by causing cellular differentiation in patients with acute promyelocytic leukemia13. These patients were subsequently treated with standard post remission chemotherapy. The two patients relapsed at 26 and 28 months following the diagnosis and died.
Most (73%) of the patients achieved remission, this includes two patients treated with ATRA. This figure is consistent with other published studies. Wells et al reported a complete remission rate (CR) of 79% for an induction regimen similar to that used in our patients3 and Creutzig et al reported a CR rate of 82%14. The three patients who did not achieve remission died during the neutropenic phase following induction chemotherapy. If three patients who died before induction chemotherapy could be begun were included (intent-to-treat analysis), 57% patients achieved remission. Taken together, six patients (43%) died within 28 days after the diagnosis was established. Thus from this analysis, it appears that remission rates could improve if early deaths could be prevented.
The 2-year survival of2l% is inferior to some of the more recently published studies which have reported higher overall survival rates. Stevens et al. reported a 7-year survival of 56% in 359 patients entered on to the Medical Research Council (MRC) 10 protoco15. It should be noted that the patients reported in this study received more aggressive treatment as compared to patients in our small series. The patients received thioguanine or etoposide in addition to cytarabine plus anthracycline induction and consolidation treatment and furthermore some patients also received auto or allogeneic bone marrow transplantation depending on the availability of donor. More recently, the German investigators using high dose cytarabine and mitoxantrone after intensification reported a 5 year survival of 60% in the AML-BFM 93 study14. The improvement in survival was more marked amongst the high risk patients and in whom less intensive daunorubicin treatment was used as part of induction treatment.
In conclusion, children with AML in our part of the world present with advanced disease, have a higher chance of early death and median overall survival of nine months. Strategies need to be developed to deal with several issues, including the problem of late presentation, the early treatment of infections at the time of presentation. and re­intensification with high dose chemotherapy.