Karachi, the largest city of Pakistan is divided into 5 districts, South, Central, West, East and Malir. The city has a population of 9,802,134; 5,261,712 males and 4,540,422 females (census 1998)1. The incidence rates for the entire city of Karachi (also called Karachi Division), have never been calculated, though the relative frequency data have been published for the years 1979-19832, followed by a gap of 15 years. During this period the incidence data for Karachi South, a district of Karachi, have been published for the years 1995-19993,4. In the present publication we have tried to calculate the minimal incidence rates for 2 years; 1998-1999.

A predominantly mixed (passive and active) registration system has evolved in Karachi, the data sources being the hospitals within the Karachi Division. The demographic, clinical and diagnostic information, provided by the hospitals is checked, coded (ICD-O2)5 and computerised. All cancer cases are included, clinically diagnosed as well as the microscopically verified ones. The cases registered included both invasive cancers and in-situ lesions in all anatomical sites, including non-melanoma skin cancer. The death registration system is computerised in a few districts but the data has limited application, as registration of deaths seems to be both incomplete and inadequate. The methodologies implemented for evaluating completeness and the criteria used to assess validity are as recommended by the International Agency for Research on Cancer (IARC) and the International Association of Cancer Registries (IACR)6,7. A customised version of Canreg-3 software was used to computerise the data and cases were confirmed after validity checks. Other computer softwares viz. SSPS, Epi-2000 and SAS supplemented the analyses. 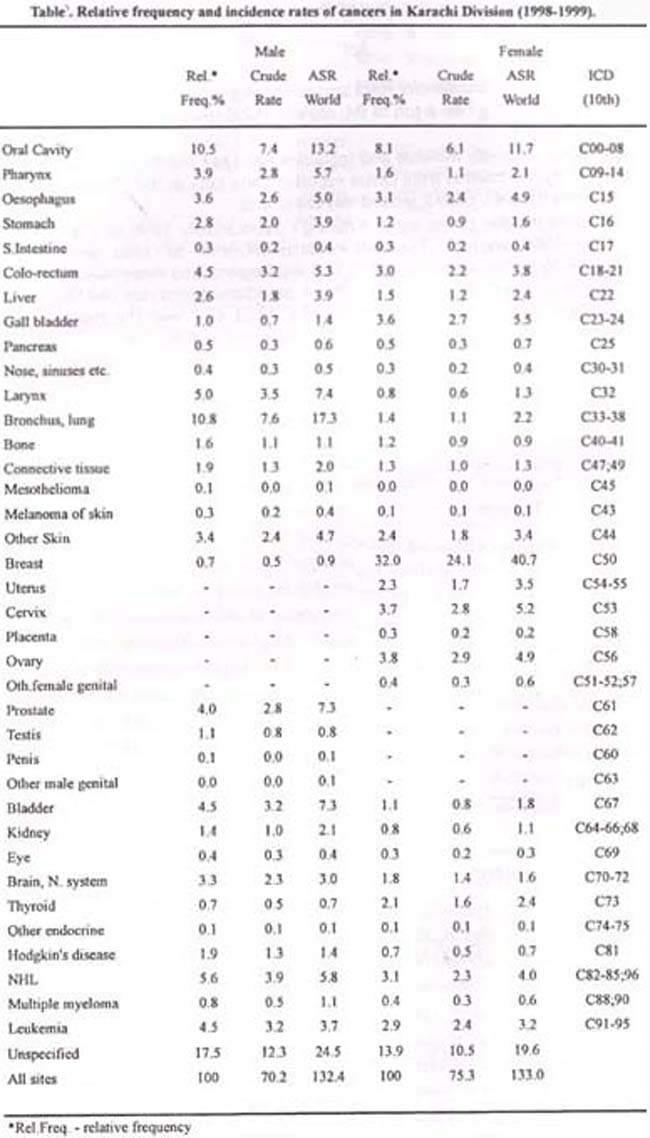 Comparison of the data of Karachi Division (KD) with contemporary data of Karachi South (KS), shows a similarity of incidence patterns with a few exceptions (KS)3,4. The overall incidence rates are lower, this is an indication of under-coverage. Males and females have an equal risk. The incidence rate amongst females is considerably reduced due to a lower incidence of breast cancer. The stage at diagnosis for all cancers remains very advanced.
Lung and breast cancers remained the leading malignancies amongst the males and females. Oral cancer was the second most common cancer, with similar rates in both sexes. The epithelial changes associated with the practice of tobacco chewing potentiated8-13 by areca nut chewing, under nourishment and poor oral hygiene have manifested in the causation of squamous cell carcinomas in children as young as 10-14 year. The third most common cancer amongst the males was Lazynx cancer predominantly a squamous cell carcinoma, with tobacco chewing and under nourishment as the most likely carcinogens. Call bladder was the third most common cancer site in the females though ninth in KS. A high prevalence of gallstones is the probable etiological determinant associated with dietic and hormonal factors. The possibility of a genetic basis independently or in association with environmental pathogens cannot however be overlooked. At this stage one cannot determine whether this indicates a genuine higher risk or a selection bias.
It is very difficult to study the trends in the cancer patterns in Karachi, because such a comparison would require an observation of incidence rates over the past fifty years, which are not available. The relative frequency data of PMRC/JPMC (1979-1983) for Karachi, when compared with the relative frequency data of KS and KD showed a very high tongue, pharynx, esophagus, lung and bone cancer amongst the males. Similarly in the females tongue, mouth, pharynx, esophagus, larynx, lung, cervix were over-represented. Cancer sites, not amenable to radiotherapy, were under-represented in the data i.e. stomach, colon, rectum and prostate in men and cancers of the stomach, colon, rectum, breast, ovary and brain in the females. These are patterns of a referral radiotherapy unit and do not indicate a falling incidence of tobacco-related cancers in the present times. The under-representation may also be an indicator of lack of endoscopic biopsies, biochemical and radiological non-invasive diagnostic techniques viz. magnetic resonance imaging (MRI) and computerisedtomography (CT) scan in the 1979-1983 era, which produced a deficit of cases of inaccessible tumors sites (e.g., of the lung and pancreas). Some care is needed in the interpretation of data, when making comparisons between different series or over time2. The undeniable fact however remains that there is an accentuated role of tobacco-related cancers in all data series in Karachi, both in the males and females.

The overall incidence rate in Karachi Division (KD) is lower than in Karachi South (KS); this could be an indication of under-coverage. Males and females have an equal risk. The incidence rate amongst females is considerably reduced due to a lower incidence of breast cancer in comparison to KS. The first ten cancers in KD and KS remain the same, except for the difference in rating. The rating of gallbladder cancer at number 3 in the females of KD is unexpected and may represent a selection bias. Amongst the males, contribution of tobacco-related cancers remain significant in all data series and there is a desperate need for tobacco control measures to be implemented.