Objective: To identify the major health and reproductive health problems for which people consult local medical practitioners.
Methodology: Forty-one practitioners completed a self-administered questionnaire. A startified purposive sample of practitioners was selected by asking the community members from various towns and rural areas to identify practitioners who have most busy practices and are perceived as providing quality care.
Results: Nine of the forty-one practitioners were females. Twenty-two were consulted mainly by women and another seventeen by an equal number of women and men. Practitioners pointed to malnutrition, malaria, gastrointestinal and respiratory tract problems as being the most common ailments. They identified menstrual problems, malnutrition among pregnant women, burning micturition and vaginal discharge as the most common reproductive health problems of their clients. Only 16 medical practitioners said that they diagnosed someone in the last one-month as suffering from sexually transmitted infections.
Conclusion: The survey helped in developing an understanding of health issues from provider perspective. Findings indicate a concordance between what has been revealed by previous population based studies in similar situations and to what health problems practitioners pointed as common. While a comprehensive needs­assessment requires surveys and qualitative interviews with communities, consultations with relatively fewer medical practitioners could also provide a quick and fair approximation of priority health problems in the area (JPMA 52: 239; 2002). 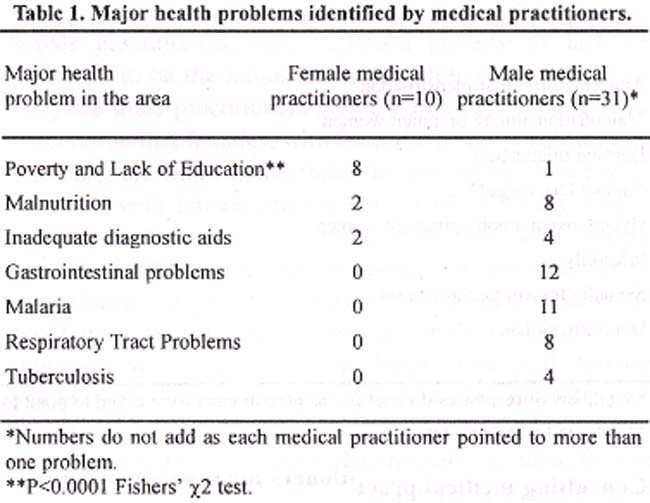 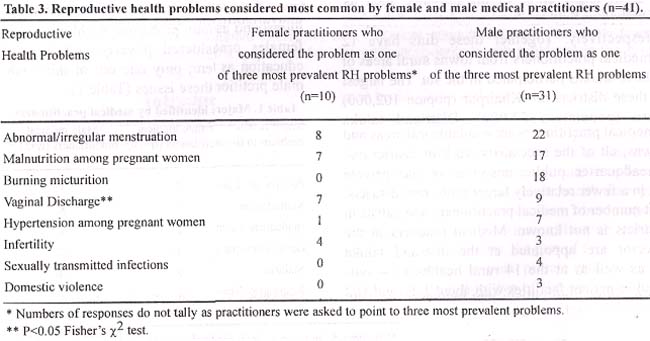 We are thankful to the medical practitioners from Khairpur and Naushahro Feroze districts. We are also thankful to all the community members and community-based organisations. The need assessment research was conducted by a team from the Department of Community Health Sciences, the Aga Khan University on behalf of Marie Stopes Society Pakistan. The need assessment research was sponsored by the DFID, UK.