The Frequency of IgA Nephropathy at a Single Center in Pakistan

IgA nephropathy, also known as Berger's disease has great degree of geographical variation in terms of incidence. Its incidence has been reported as low as 2% to as high as 52% in various studies from different parts of the world. The recognition of this entity is principally based on its characteristic clinical presentation and pathological findings. Clinically, in most of the cases, it is presented as recurrent episodes of macroscopic hematuria, persistent microscopic hematuria with mild to moderate proteinuria. Pathologically, it is characterized by focal glomerulonephritis with predominant IgA deposits in glomeruli. The prevalence of IgA nephropathy has not been widely studied in Pakistani population, especially belonging to the southern part. Pakistan is a developing country of South Asia with a population of about 140 million. The purpose of this study was to identify the prevalence of IgA nephropathy in this part of the world.

total of 105 consecutive biopsies were included in this study (from 1998 to April 2001). The cases with inadequate biopsy specimens either for light or immunofluorescence microscopy, were excluded from the study. Two separate cores of renal tissue were obtained for histological and immunofluorescence studies. As facility for electron microscopy (EM) was not available, so sample was not submitted in EM fixative.
For histological evaluation, the biopsy specimens were fixed in 10% buffered formalin, processed routinely, embedded in paraffin and cut at 4 um thickness. The sections were stained with hematoxylin and eosin (H&E), periodic acid Schiff (PAS), Masson trichrome and Gomori methamine silver (GMS). The glomerular lesions in IgA nephropathy were graded according to Haas classification.1
Fresh and unfixed biopsy specimens were obtained for immunofluorescence microscopy immediately transported to the laboratory and were frozen either in cryostat or in liquid nitrogen. Cryostat sections were cut at 5 um for direct immunofluorescence microscopy and incubated with antibodies specific for the heavy chains of IgG, IgA, IgM, C3 and fibrinogen. The intensity of fluorescence was graded on a scale of 0 to 4; 0 being negative and +4 for maximum intensity.

Based on histological and immunofluorescence studies performed in 105 consecutive biopsy specimens, 79 cases (75.2%) were classified as glomerular diseases including both primary and secondary; in 21 cases there was the suggestion of minimal change disease; 11 cases had diffuse proliferative glomerulonephritis; 11 cases had membranous glomerulopathy; 10 cases were lupus nephritis, 5 cases had focal proliferative glomerulonephritis, and 5 cases showed crescentic glomerulonephritis. In 6 cases focal and segmental glomerulosclerosis was appreciated. Ten cases were diagnosed as IgA nephropathy among which one case was that of Henoch-Schonlein purpura (Table 1). 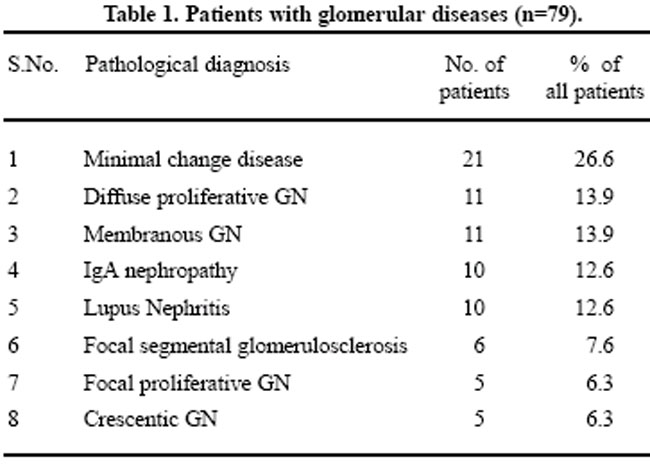 Sixteen cases (15.2%) showed interstitial nephritis; 5 cases had end stage kidney disease showing global glomerulosclerosis; 2 cases had amyloidosis and one each had diabetic and hypertensive nephropathy and acute tubular necrosis. The patients with IgA nephropathy showed an age range of 6 to 65 years with a mean age of 31.7 years. The male to female ratio was 1.5:1. The clinical, pathological and immunofluorescence features are summarized in the tables 2 and 3. 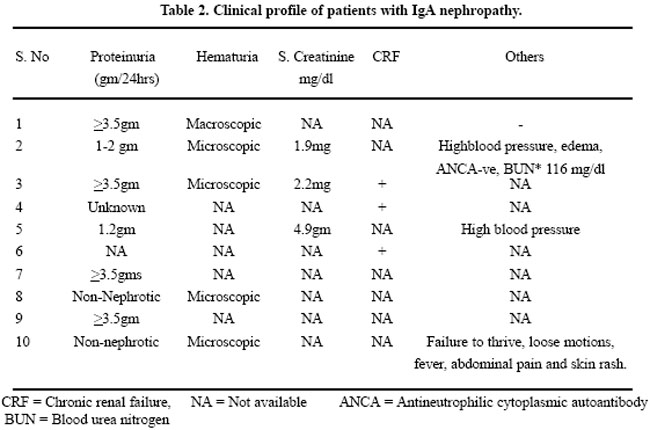 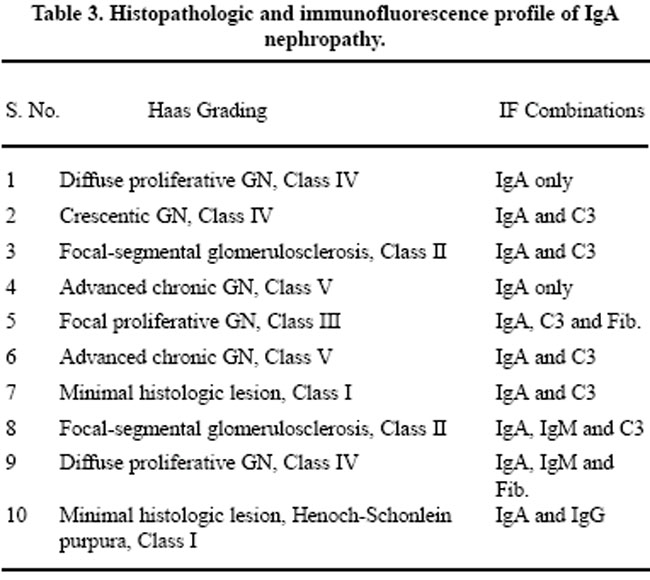 The pattern of immune deposits revealed exclusive IgA immunoglobulin in 2 cases (20%); IgA with C3 in 5 cases (50%); IgM or IgG were co-deposited in 20% and 10% of cases, respectively. Fibrin deposits were observed in 2 cases (20%). On light microscopic examination 3 cases revealed diffuse proliferative pattern with one case showing crescent formations; 2 cases, each of focal-segmental glomerulosclerosis, minimum histologic lesion and advanced chronic glomerulonephritis were observed, while one case revealed focal proliferative morphology.

IgA nephropathy is recognized as the most prevalent form of primary glomerulonephritis worldwide and a major cause of end-stage kidney disease and chronic renal insufficiency. The frequency of IgA nephropathy reported in the international literature varies widely from as low as 2% to as high as 52%. This variation shows a definite geographic pattern, as 5% to 10% frequency was reported from North America, United Kingdom, and northwestern Europe, 20% to 35% in most European series and 25% to 52% in studies from Asian countries.2-41 The highest prevalence in Asia was reported from Singapore and Japan10,21 while in Europe, the prevalence rate was highest in Italy and France22,39 (Table 4). This highly variable geographic variation is attributable to many factors including institutional policy for renal biopsy, ethnic and racial factors. It is well known that the incidence and prevalence of IgA nephropathy largely depends on the policy used in performing the renal biopsy in patients with persistent microscopic hematuria and in subjects with recurrent gross hematuria with normal renal function. The importance of biopsy policy is highlighted by the example of increased frequency of IgA nephropathy reported from United Kingdom. In two earlier studies the frequency of IgA nephropathy was reported to be 4% and 10% in the UK.25,26 In a more recent study, the authors noted that the disease was detected in 7.1% of biopsies during 1972 to 1986 whereas the frequency for 1979 to end-1986 was 21.1%. The authors concluded that the apparent increase was predominantly a result of an increase in the absolute number of patients with IgA nephropathy presenting with microscopic hematuria and proteinuria, with little change in the incidence of those with episodic macroscopic hematuria. They also suggested that the true disease incidence may be greater than previously suspected, and comparable with that in the countries reporting the highest detection rates and hence supporting the earlier suggestion of Power et al that IgA nephropathy is not rare in the UK.27,42 Racial differences certainly play some role in the prevalence of IgA associated nephropathies. In a study from Alabama, USA, the authors have reported a strikingly low prevalence of IgA nephropathy in Blacks as compared to Whites (1 Black and 21 whites) This study was comparable with other studies from USA.43,44 In another study from South Africa, which included 252 Blacks and 75 Indians, the authors found a very low prevalence rate of IgA nephropathy in Blacks (0.7%) as compared to Indian residents (13.3%) in South Africa.35 These observations regarding the racial distribution support the role of familial predisposition in prevalence of IgA nephropathy.
The prevalence of IgA nephropathy has not been studied widely in Pakistani patients and some of data is available in the local journals, and therefore is not accessible for international reference. In 2 studies from southern part of the country, it was reported to be 2%, which was carried out in 50 cases with application of immunoperoxidase technique and 5.9%, which was conducted on 102 cases.13,14 In another study from northern part of Pakistan, the prevalence of IgA nephropathy was reported to be 7.9% out of 238 cases with glomerulonephritis.15 Here, it would be worth mentioning that at present there are no set criteria regarding the renal biopsy policy. It varies from nephrologist to nephrologist and unfortunately the facility of immunofluorescence microscopy is available only in few centers, therefore many nephrologists are usually reluctant to do biopsy in patients with clinical suspicion of IgA nephropathy especially with normal renal functions.
Hematuria is the most common and consistent manifestation of IgA nephropathy and is seen in more than 95% of patients as the presenting manifestation. Episodic gross hematuria and persistent microhematuria occur in approximately 54% and 78% of patients, respectively. The incidence of gross hematuria in children is higher (80%) than in adults (45%) in Western population, while in the Eastern countries the incidence of macrohematuria is same in the two groups i.e., 40%. Most of the cases are associated with mild to moderate proteinuria and rarely the nephrotic syndrome. In small percentage of cases, hypertension, acute renal failure and chronic renal failure were observed. The age range of the patients with IgA nephropathy was 4 to 80 years with a mean age of 28 years. The male to female ratio was 2:1.45-51 In this study 4 cases (40%) presented with nephrotic syndrome, which was unusual as nephrotic range proteinuria is unusually seen in patients with IgA nephropathy. On light microscopic examination 2 of these cases showed diffuse proliferative pattern and in one case the patient also had gross hematuria. One case with focal segmental glomerulosclerotic pattern and surprisingly one case with minimal glomerular lesion also showed nephrotic range protienuria. In general, patients with heavy proteinuria have the most severe glomerular lesions and the least favorable prognosis, however, a subset of patients with minimal glomerular lesions have been found to be associated with nephrotic range protienuria. Two cases that presented with chronic renal failure revealed morphological features of advanced chronic glomerulonephritis (Haas class V). Gross hematuria was detected in only one patient with a diffuse proliferative pattern in an adolescent female. Microscopic hematuria was the presenting feature in 3 cases. History of hematuria was not recorded in 6 cases. Five cases (50%) showed impaired renal functions out of which histological examination of 2 cases revealed advanced chronic GN (Haas V) pattern while one case each of focal segmental glomerusclerosis (Haas II), focal proliferative GN (Haas III) and crescentic GN (Haas IV).
In conclusion, the frequency of primary IgA nephropathy was found to be 12.65% in our series of patients. The difference in prevalence from other local studies is probably related to the sample size and possibly the biopsy policy in different institutions. We feel that larger studies are required to establish the exact prevalence of IgA nephropathy in this country. 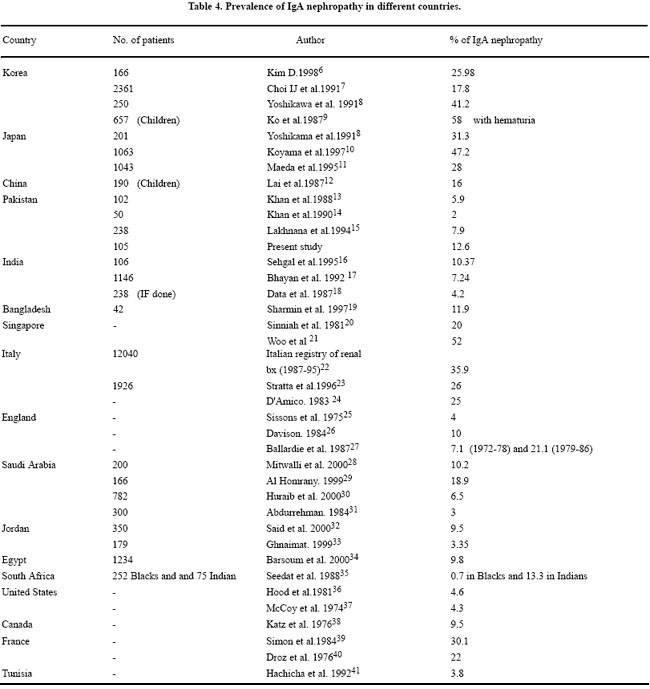 This work was supported by Seed Money grant for research development approved by The Aga Khan University, Karachi, ID # 990107 dated June24, 1999. We are thankful to Mr. Muhammad Israr Nasir for his generous assistance in this article.

Objectives:
To detect the prevalence of IgA nephropathy in Pakistani patients, as no significant published data from this part of the developing world is available in the international literature for reference.
Method:
The study was conducted in a university hospital on 105 consecutive renal biopsy specimens. Direct immunofluorescence microscopy was performed using antibodies specific for the heavy chains of IgG, IgA, IgM, C3 and fibrinogen.
Results:
Seventy-nine (79) cases were classified as glomerulopathies, out of which 10 cases (12.65%) were diagnosed as IgA nephropathy, among which one case was that of Henoch- Schonlein purpura. The age range was 6 to 65 years with median age of 25 years and male to female ratio was 1.5: 1. Nephrotic range proteinuria was seen in 40% of cases and 50% cases showed impaired renal function. The light microscopic examination revealed diffuse proliferative pattern in 3 cases out of which one case showed crescent formations. Focal-segmental glomerulosclerosis, minimum histologic lesion and advanced chronic glomerulonephritic patterns were observed in 2 cases each and in one case focal proliferative morphology was appreciated.
Conclusion:
The frequency of IgA nephropathy among glomerular diseases was 12.65% in our study, which is somewhat higher when comparing the studies from North America, United Kingdom and Northwest Europe. However, it was significantly lower when comparing the studies from other parts of Asia (JPMA 53:301;2003).