Objective:To evaluate the role of dexamethasone as adjunctive therapy in adult acute bacterial meningitis (ABM) in two groups of patients treated with antibiotics alone or a combination of antibiotics and dexamethasone. Design: Systematic sampling interventional open cohort study.
Setting:Department of Medicine (Medical Unit II), Jinnah Postgraduate Medical Centre, Karachi.
Patients:Sixty eight patients aged 12-85 years admitted in Medical Unit II and diagnosed to have ABM. Patients were divided into two groups. Group A received anti-microbial therapy for 14 days (a combination of benzyl penicillin 6 million units IN 6 hourly and chloramphenicol 1 gm IN 6 hourly) and group B received the same antimicrobial therapy with dexamethasone 0.6 mg/kg/day in 3 divided doses for 4 days.
Main Outcome Measures: Differences in mortality and morbidity in the two groups and differences in the CSF inflammatory parameters between the two groups of patients.
Results:There was early resolution of fever, headache and altered consciousness in group B as compared to group A. Cranial nerves involvement was lower in group B. There was no difference in the occurrence of other focal neurological deficits between the two groups. CSF inflammatory parameters (glucose, protein and WBC count) were significantly better in group B by day 5. No complications attributable to dexamethasone were seen in group B.
Conclusion:There was early resolution of symptoms and CSF inflammatory parameters in the group that received dexamethasone as adjuvant therapy. Mortality was lower in the group treated with dexamethasone but the difference was not statistically significant. Dexamethasone should be administered to all adults patients with ABM(JPMA 52:233;2002).

Pyogenic Meningitis is a dreaded disease not only because of its mortality but also because of its long term morbidity. Dexamethasone is used as adjunctive therapy in many infectious and inflammatory disorders to improve the ultimate outcome of treatment. Although routinely used for tuberculous meningitis, its role in pyogenic meningitis in adults is not defined. Inflammation of the subarachnoid space is largely responsible for the pathological consequences and clinical features of bacterial meningitis including increased permeability of blood brain barrier (BBB), cerebral oedema, increased intracranial pressure, cerebral vasculitis, loss of auto-regulation of cerebral blood flow, cortical hypoxia and CSF acidosis1,2. Subarachnoid space inflammation is induced by certain bacterial constituents. These pro-inflammatory agents include gram positive cell wall peptidoglycans and teichoic acid and endotoxins of gram negative bacteria. These constituents induce inflammation through the release of various inflammatory cytokines within the CSF, such as interleukin (IL)-IB , tumour necrosis factor (TNF), IL-6 and platelet activating factor3,4. CSF is an area of impaired host resistance due to the virtual absence of antibodies and complement. This allows rapid bacterial proliferation. Brisk bacteriolysis after the administration of bactericidal antibiotics may accelerate the release of pro-inflammatory cell wall components into the CSF. Increased cytokine production ensues and thus exacerbates inflammation with its patho-physiological consequences. Antibiotic therapy therefore has the potential for exacerbating the consequences of CSF infection. Administration of glucocorticoids as an anti-inflammatory agent to ameliorate these effects of infection has been evaluated by many groups particularly in children5-10.
This study was undertaken to determine the role of dexamethasone in all adult cases of ABM at the very outset, in order to minimize the short and long term sequelae of ABM.

Study design
This was an open, interventional cohort study conducted in Medical Unit II of Jinnah Postgraduate Medical Centre, Karachi over a period of 2 years from May 1998 to April 2000. This is a 50 beded unit which receives medical patients on every third day. All patients admitted with a clinical diagnosis of ABM subsequently confirmed by a lumbar puncture and CSF examination, were included in the study. A total of 68 patients were recruited over a 2 year period. Exclusion criteria were gram negative septicemia shock or meningococcaemia; previous history of seizures (> 1); pre-existing focal neurological deficit; concomitant debilitating disease; conditions requiring immuno-suppressive therapy; conditions requiring cytotoxic chemotherapy; patients with contraindications to steroid therapy and pregnancy. Four patients of ABM were excluded, from the study; 3 had meningococcal septicemia; and 1 had severe chronic obstructive pulmonary disease (COPD).
Systematic sampling was done in which every alternate patient was assigned to either group A or group B irrespective of their age, sex or disease severity.
Treatment protocol
Group A
Patients assigned to group A received a combination of benzyl penicillin in a dose of 6 million units I/V 6 hourly (after giving a test done of 0.1 ml s/c) and chloramphenical I g I/V x 6 hourly. In case of penicillin hypersensitivity, ceftriaxone 2 g twice daily intravenously was substituted. Antibiotics were reviewed appropriately after culture and sensitivity reports were received. The minimum duration of treatment was 14 days. Chloramphenicol was discontinued if gram negative diplococci were identified in CSF smear.
Group B
Patients in this group were given the same antibiotic regimen and additionally received dexamethasone intravenously in a dose of 0.6 mg/kg/day in three divided doses for the first 4 days of treatment. The first dose of dexamethasone was administered concomitant with the first dose of antibiotic.
All patients received optimal supportive therapy and nursing care . Paracetamol was used as an antipyretic at a dose of 0.5-1 g x 8 hourly. Mannitol was given at a dose of I g/kg twice daily in cases of altered consciousness. Lumbar puncture was done in all patients before starting treatment, after excluding papilloedema or focal neurological signs. CSF was sent for biochemical analysis, microscopy, gram staining, culture and sensitivity. CSF analysis was repeated on the 5th day of treatment. Other investigations done on day 1 and day 5 were complete blood count, glucose, urea, creatinine and electrolytes. Blood culture sample was also taken on day 1.
Patients were followed up for changes in symptoms and signs including fever, headache, vomiting, skin rash, joint pains, signs of meningeal irritation, altered consciousness, melaena or haem atochezia.
Statistical Analysis
For comparison of two means, student’s t-test was employed. The chi-square test of proportion was used for comparison of difference in percentages.

A total of 72 patients with ABM were admitted in Medical Unit II over a 2 year period from May 1998 to April 2000. Four patients were excluded from the study (3 patients had meningococcaemia and 1 patient additionally had severe COPD). The mean duration of symptoms prior to presentation in group A and B was 2.1 and 1.8 days in 29 patients in group A and 33 patients in group B. The pace of respectively. In group A male to female ratio was 4.5:1 while in group B it was 16:1. Mean age of the study population was 29.82 ± 17.43 with a range of 12-85 years. Mean age of group A was 33.3 ± 19.33 and that of group B was 26.4 ± 14.8, thus showing no significant age difference between the two groups.
At the time of presentation mean systolic BP was 115±20 and diastolic BP was 71±13 while mean temperature was 100.37 ± 1.19° F. Seventeen percent of patients had the typical skin rash of meningococccal infection (8 in group A and 9 in group B). Arthritis affecting the knee joints was observed in 3% of the cases (1 in group A and 2 in group B). Neck rigidity was present in 33 patients in each group, whereas Kernig’s sign was positive
Cranial nerve involvement was much lower in group resolution of these signs with treatment is shown in Figure 1. 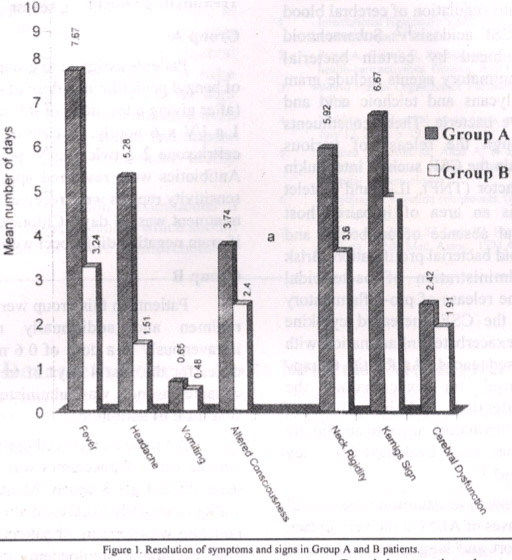 Cerebral dysfunction was assessed in accordance with Glasgow Coma Scale (GCS) at the time of presentation. Twenty one patients in group A and 19 patients in group B had a GCS score of < 15. Early restoration of cognition in group B was observed as compared to group A, although the difference was not statistically significant.
B being 17.6% (6 patients) as opposed to 29.4% (10 patients) in group A. All cranial nerve palsies appeared during the course of treatment. Nerve deafness was recorded in 2 patients in each group. One patient in group A developed persistent dysphasia and right crural monoparesis. Similarly 1 patient in group B developed paraplegia which persisted beyond day 14. Therefore, there was no difference in the development of focal neurological deficit between the two groups and the overall frequency of this complication was very low in this study. Overall seizure activity was 2.9% (2 patients in group A). No patient in group B had seizures. Herpes labialis was frequent and occurred in 30% of cases overall by day 3. No adverse effects attributable to dexamethasóne were documented.

The CSF changes on day 1 and day 5 are shown in Table. CSF was turbid in almost all patients in both groups and clarity was restored by day 5. On day 5 the CSF glucose showed a statistically significant improvement in group B as compared to group A (P

The authors would like to thank Mr. Akhtar Anwer for his invaluable statistical help and Mr. Muhammad Anwer for patiently typing the manuscript. The study was self funded and there was no conflict of interest.