Primary lymphomas of the urinary bladder is a fairly uncommon entity, whereas urinary tract involvement is reported in up to 13% of the cases with advanced systemic disease1, Primary malignant lymphoma of the urinary bladder was first described in 1885 and marked female preponderance is reported with a female to male ratio of 6.5:12. The most common types of primary lymphoma of the urinary bladder are extranodal marginal zone lymphoma of mucosa associated lymphoid tissue type (MALT-type lymphoma) and diffuse large B cell lymphoma. Development of lymphomas in a site normally
not including lymphoid tissue is explained by the MALT concept, which was first described by Isaacson and Wright in 19833.
In this paper we report a 58 years old woman with primary high grade B type malignant lymphoma who presented with genitourinary bleeding and a large pelvic mass appearing as a gynecologic tumor.

A 58 years old woman suffering form chronic pelvic pain, pelvic pressure and mass , dysuria and genitourinary bleeding for 2month was admitted for evaluation. On gynecologic examination uterus was semi-fixed, cervix was mobile and a solid, irregular mass with a size of 10 cm that was located anterior to uterus and involved the right adnexa was detected. Ultrasonographic examination confirmed a solid mass with indefinite borders. CA 125 level was normal. On digital examination the rectal mucosa was normal. PAP smear and endometrial biopsy were without any pathology. To find out the origin of the bleeding, a cystoscopic evaluation and an intravenous pyelogram were performed and an irregular, necrotic, solid submucosal mass was observed at the dome of the bladder. Histopathologic and immunophenotypic evaluation of the biopsy specimen performed thereafter by immunoperoxidase methods using Streptavidin-Biotin peroxidase system revealed a high grade B type malignant lymphoma (figures 1 and 2). 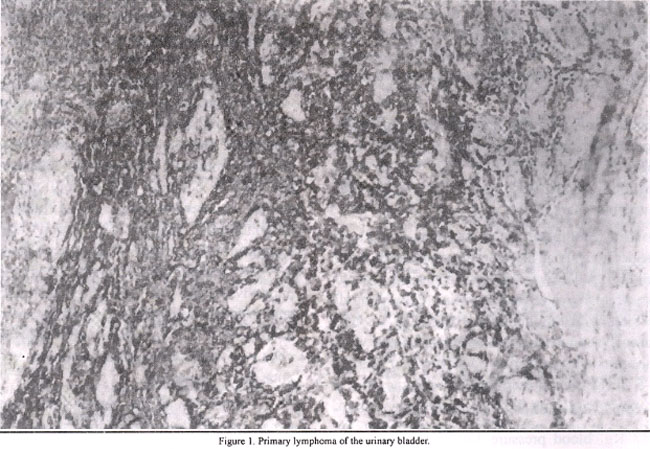 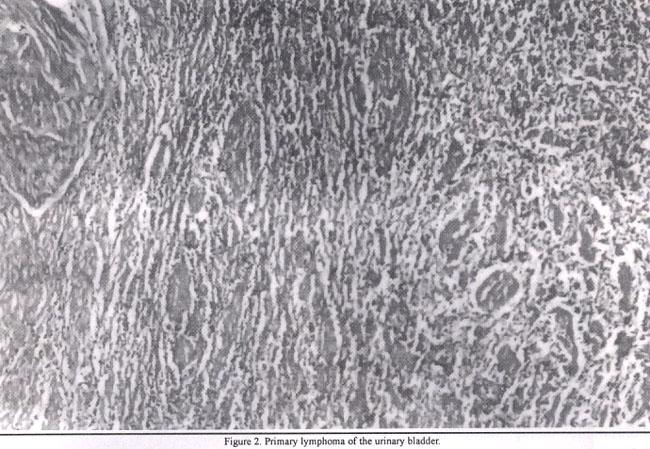 After establishment of diagnosis as postmenopausal adnexal mass and lymphoma of the urinary bladder, patient was re-evaluated. In clinical (including complete blood count, tumor markers, peripheral blood smear and bone marrow biopsy) and in radiological investigations (including computed tomography) there was no evidence of tumor found elsewhere.
On exploratory-laparotomy, urinary bladder was observed to have strict adhesions with anterior abdominal wall, omentum, uterus and right adnexa forming a conglomerate mass. Peritoneal surface was free of any metastatic spread. There was no sign of fistula formation. After mobilization of the bladder, a cystotomy was performed and a solid, necrotic mass originating from bladder mucosa at the dome was observed which also invaded bladder wall. The mass was removed completely by partial cystectomy with a 2 cm margin of normal tissue. Total abdominal hysterectomy and bilateral Opherectomy was also performed. Retroperitoneal lymph nodes were not found to be enlarged by palpation. Four courses of CHOP regimen (cyclophosphamide, vincristine, doxorubucin, prednisolone) were implemented. The re-biopsy performed from the dome of the bladder on the 3rd and 6th months were normal. The patient was complaint-free and no local or distant recurrence was found during the 6 years follow up.

Primary malignant lymphoma of urinary bladder is a fairly uncommon disease accounting for 0.2% of cases with extranodal lymphoma, mostly appearing in sixth decade2. Significant proportion of extranodal non-Hodgkin lymphomas is known to arise from mucosa-associated lymphoid tissue, such as neoplasms arising in indigenous lymphoid tissues as in intestine or lung, or as those arising in chronic inflammatory conditions.
Since lymphoid tissue is normally not found in the urinary bladder, pre-existing chronic inflammation is postulated as the origin. Nevertheless, in most of the cases, as in our case, history of chronic cystitis and histologic evidence of such an inflammation are lacking2,4,5 and therefore uncertainty still exists regarding role of chronic cystitis in the development of lymphoma. In reviewing literature, the most apparent symptoms, as we observed in our patient, are hematuria, dysuria, nocturia, frequency, suprapubic or abdominal pain, weight loss and anorexia2,4. The disease presented as a pelvic mass showing strict adhesions with adjacent pelvis organs in our case resembling a genital cancer. But we initially thought that the patient had both a primary lymphoma of the bladder and an adnexal mass. With an extensive work-up and histopathological evaluation of the biopsy specimen thereafter a high grade B type lymphoma was diagnosed.
Lymphoma of the bladder is proposed to have characteristic cystoscopic appearance that can aid in diagnosis and is usually descried as a smooth, nonulcerative, friable or hemorrhagic submucosal tumor6.
Treatment of these patients with primary lymphoma of the bladder includes many options with favorable prognosis. In a review of the literature, multimodality therapy including surgical resection followed by chemotherapy or radiation therapy provides favorable prognosis2. Only 3 of 27 patients died and 23 of 24 patients had no evidence of disease at the 31 month follow up. In another review none of the 6 patients died as a result of lymphoma7. The extent of surgery does not seem to effect the prognosis, since a similar proportion die or have recurrence, regardless of total or partial cystectomy/resection performed4. The combination therapy including surgery and chemotherapy resulted in a 6 year disease-free survival in our patient. Based on the findings in the literature and in our case we conclude that therapy including surgery alongwith radiation or chemotherapy for primary lymphoma of the bladder provides a good prognosis, even in case of a large-adhesive mass.