Serotyping of the Hepatitis C in Pakistan

Significance of serotypes of hepatitis C lies in their geographical diversity and response to Interferon therapy. Certain patterns have emerged in their worldwide distribution. Countries like United States, Western Europe, United Kingdom, Australia and Japan have types, lb,2a,2b,3a and type 3 is more common in South and South East Asia. Serotype 4 is the main serotype in Egypt, other African countries and the Middle East, type 5 in South Africa and type 6 in Hongkong and adjoining areas1. This study reports the frequency of HCV serotypes in our patients and other reported series from Pakistan.

Two hundred and seventy eight patients of chronic liver disease with persistently raised alanine aminotransferase, positive anti HCV and HCV RNA were included in this study.
All samples were serotyped using Murex serotyping 1-6 assay assay system (Abbott Laboratories) which is based on peptides derived from two regions of NS42.
There were 200 (71.9%) males and 78 (28.1%) females. Of 278 sera 215 (77.3%) were typable and 63 (22.7%) untypable. Of typable sera 17 1(79.5 %) were of type 3,19 (8.8%) had multiple serotypes and 18 (8.4%) were of type 1. The remaining were of other serotypes. Similar pattern was observed in other reported studies from Pakistan3-7 as shown in the Table. 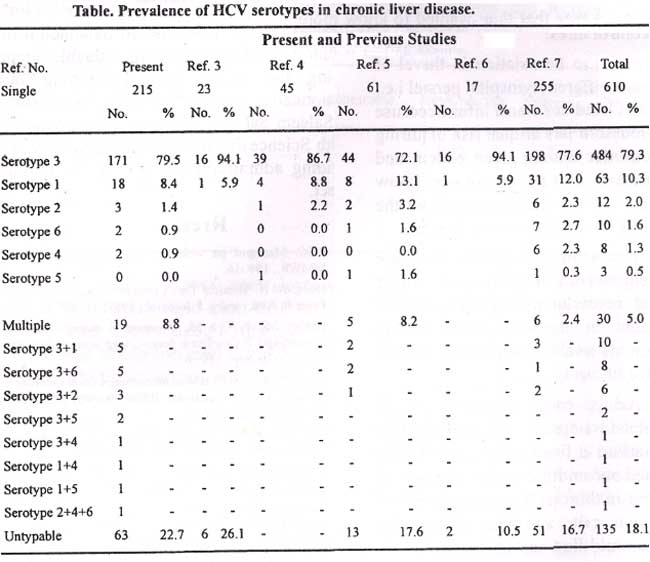 As in Pakistan,3-7 Serotype 3 is more common in other South and South East Asian countries1. Overall frequency of multiple serotypes is 4.7% in Pakistan and 8.8% in this study. Positivity of multiple serotypes may be due to transient or occult superinfection7 or ineffective immunity in patients with chronic HCV infection8,9.
Better response to interferon and short term treatment10 is reported in patients infected with serotype 3. Chemello et al observed that long term normalization of ALT was infrequently observed with serotype 1(29%) as compared to 52% with serotype 2 and 74% with serotype 311.Other variables like age, gender, presence of cirrhosis before treatment and degree of viraemia12 may affect the response but predictability according to serotypes can not be undermined. With serotype 3 being the common type it is presumed that both biochemical and virological response to Interferon will be better in Pakistani patients.