Objective:To study the teratogenic risk of Doxycycline administration during gestation on skeletal differentiation. Design: An animal study carried out on experimental Albino rat.
Setting:The study was carried out in the Department of Anatomy Basic Medical Sciences Institute, Jinnah Postgradute Medical Centre (JPMC), Karachi from June 1999 to May 2000.
Methods:Doxycycline was given to pregnant female Albino rats in a dose of 8mg/kg intraperitoneally from day 8th to 19th of gestation. The intact rat fetuses were isolated on days 15th to 19th of gestation and pups on 1st postnatal day. These animals were then killed by deep ether anesthesia and fixed in 80% alcohol. They were then bulk stained with alizarin red S and alcian blue. Finally they were cleared in 4% KOH and stored in glycerin. The fore and hind limbs were disarticulated from the axial skeleton and observed under stereomicroscope for evidence of skeletal differentiation in the form of presence of primary ossification centers in long bones. The time of appearance of these centers were noted and compared statistically with those in the control animals.
Results:The study revealed that the skeletal differentiation in long bones was delayed in experimental animals as compared with controls.
Conclusion:Doxycycline administration during pregnancy presents a risk to skeletal differentiation and therefore to its growth (JPMA 52:211,2002).

Doxycycline and Minocycline are the broad-spectrum antibiotics commonly used nowadays for different kind of infections. They belong to the group of Tetracyclines, which are contraindicated in pregnancy1, because they cross the placental barrier and get deposited in calcified tissues2,3. Their use in pregnancy has been associated with discoloration of teeth4 and retardation in bone growth5. The evaluation of intended or unintended use of Doxycycline during pregnancy is a challenge for a doctor but unfortunately unqualified persons (quacks) are also using these drugs as commonly.
Studies on the effects of tetracyclines on bone growth have been carried out but any effect on skeletal differentiation has not been reported so far. This study was done to evaluate the effect of Doxycycline administration during gestation on the differentiation of long bones in the extremities of prenatal laboratory albino rat.

One hundred and twenty rat fetuses and pups obtained from 32 pregnant female albino rats were used in this study. These 32 female albino rats were 10-12 weeks of age and spontaneously ovulating when taken from the animal house of B.M.S.I., JPMC, Karachi for study. They were mated with fertile males of same strain, allowing one male rat with two female rats in one cage6. On next morning the female rats were examined for signs of mating in the form of blood stained vagina or a vaginal plug (a mucoid greenish white material). Presence of any one of these signs was considered as day I of pregnancy7. Pregnancy lasts 21 days in rat8.
Half of the pregnant female rats were given Doxycycline in a dose of 8mg /kg intraperitoneally from day 8th to 19th of gestation. The other half received normal saline. Intact rat fetuses were obtained on days 15, 16, 17, 18 and 19th of gestation by killing their mothers (the pregnant female rat in each group) and intact pups on 1st day of their birth from both experimental and control groups. Ten specimens were then randomly selected for study from each group for each of the days mentioned (total 60 from the group of female pregnant rats which received doxycycline and total 60 from the group which received normal saline). The sex of these offsprings was omitted.
All pre and postnatal animals were then killed by deep ether anesthesia and fixed in 80% alcohol after removing their skin and viscera. They were then bulk stained in alizarin red and alcian blue, cleared in 4% KOH (to reveal ossification centers) and stored in glycerin9.
Left fore and hind limbs were separated from axial skeleton at their joints and viewed under a stereomicroscope. The presence or otherwise of primary ossification centers in humerus, ulna, radius, femur, tibia and fibula was observed and recorded. The said bones were observed throughout the experimental period (15th to 19th days of gestation and 1st postnatal day) even after the detection of primary ossification centers to see appearance of any additional ossification center in the shaft or ends of these long bones. The mean values of the time (day of gestation) of first appearance of these centers in experimental and control bones were subjected to student’s T test.

The mean time of appearance of primaiy ossification centers in major skeletal components of both extremities in experimental and control animals are given in Table. 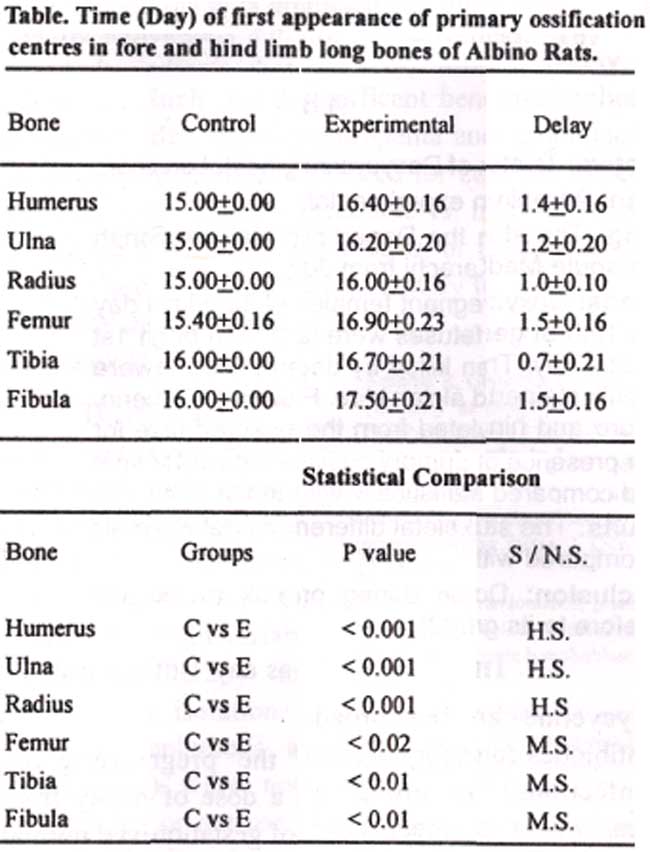 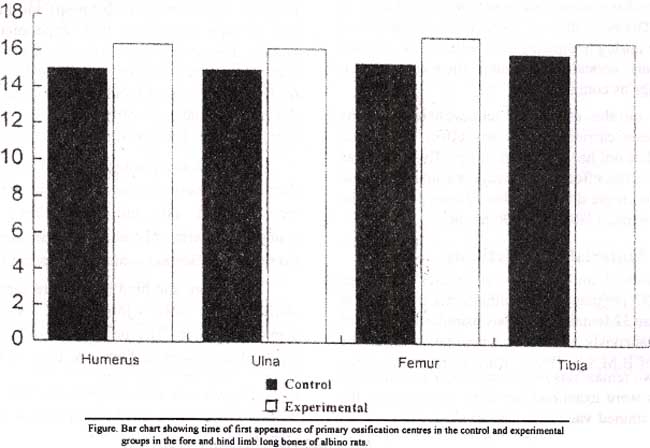 Appearance of primary ossification center is the first indication of skeletal differentiation. The effect of Doxycycline treatment on skeletal differentiation was primordia of fore and hind limb long bones in experimental therefore studied by determining the time of first appearance of representative ossification centers in the and control animals.
Doxycycline delayed the appearance of primary ossification center in humerus by 1.4±0.16 days, in ulna by 1.2±0.20 days and in radius by 1±0.00 day as compared to those in control animals. This delay was highly significant (P <0.001). Similarly Doxycycline delayed the appearance of primary ossification centers in femur by 1.5±0.16 days, in tibia by 0.7±0.21 days and in fibula by 1.5±0.2 days when compared with those in control long bones. The delay averaged 1.3 days in fore limb and 1.1 days in hind limb bones. This indicates that the forelimb bones were subjected more to the adverse effects of Doxycycline. This may be attributed to the fact that the fore limb bones differentiate earlier than the hind limb bones during gestation10.
It has long been known that tetracyclines get fixed in calcified tissues and that they may have an inhibitory action on calcification process11. The mechanism by which tetracyclines bind to the calcified structure is stated by some workers to be simple chelation between them and calcium12. Others believe that fixation of tetracyclines is mediated by some more complex mechanisms13. Presently it is known that tetracyclines chelate calcium and form tetracycline-calcium-orthophosphate complex, which accumulates in bone by adsorption onto bone crystal surface and eventually incorporates into its crystal lattice2.
In this study the delay in appearance of ossification centers by Doxycycline may be attributed to its deposition in bones along with calcium resulting into their delayed demonstration by alizarin red. The alizarin red staining is the most valid technique of detecting early ossification (second only to histological technique).14
Our observation is in accordance with the findings of Balsamo et al15, who reported faulty and delayed calcification process of otoliths in developing chick embryo after tetracycline administration.