Attitudes of Health Care Providers to Induced Abortion in Pakistan

Abortion is perceived differently by different people at different times in different socio-cultural contexts. In many countries, abortion has been shrouded in secrecy, enmeshed in cultural taboos, and caught up in personal value conflicts. No other elective procedure has evoked so much emotional debate or received such sustained public attention over time. Despite all these moral ambiguities, however, there is persuasive evidence that women of all backgrounds resort to abortion-regardless of legal codes, religious sanctions, or personal dangers.1
Statistics regarding the prevalence of induced abortion in Pakistan are scanty, scattered and hospital based. The hospital- based studies have probably given us more information than any other kind of research. According to WHO's estimates based on four studies carried out between 1961 to 1983, 2-12% of maternal deaths in Pakistan are due to complication of abortion.2 The studies conducted during 1990s present similar results.3-7 Since most of these studies are based on hospital data, the magnitude of abortion in the country cannot be calculated. However a longitudinal study conducted in a rural community by Awan and Parvez8 reveals that among 1576 married women followed throughout their pregnancies, 13.3% pregnancies ended up as spontaneous abortions and 4.2% as induced abortions.
Though the Penal Code of Pakistan makes provision for abortion if the life of the mother is endangered, the fact that no data is available concerning legally induced therapeutic abortion, indicates restrictive interpretation of the law by the medical profession. This observation is supported by the fact that there is considerable difference of opinion regarding medical indication for termination of pregnancy among practicing gynecologists in Pakistan. While some accept that factors, which endanger the life of the mother, provide enough justification for terminating the pregnancy, there is a much larger number of doctors, who decline to carry out any such procedure because of their religious or personal beliefs and the danger of having been labeled as an "abortionist".
The physicians constitute a professional sector that can play an important role in improving abortion-related services and reforming current laws on abortion9 It was, therefore, proposed to carry out a survey of health care providers' attitudes towards induced abortion, their awareness of abortion laws of the country and views regarding the existing laws.

The study was conducted in three provincial capitals of the country; Karachi, Lahore and Peshawar. In each city one teaching hospital, one maternity home and a number of abortion clinics were selected. The health care providers in six hospitals (3 teaching hospitals and 3 maternity homes) and 32 abortion clinics were interviewed through a questionnaire to collect data about their perceptions regarding induced abortion. The data was collected from October 1997 to December 1997. In teaching hospitals, only the staff from Department of Obstetrics and Gynaecology was interviewed. In all 114 health-care professional were contacted. None refused the interview.

The details of 114 health-care providers, who answered the questionnaire or accepted to be interviewed, are given in Table 1. 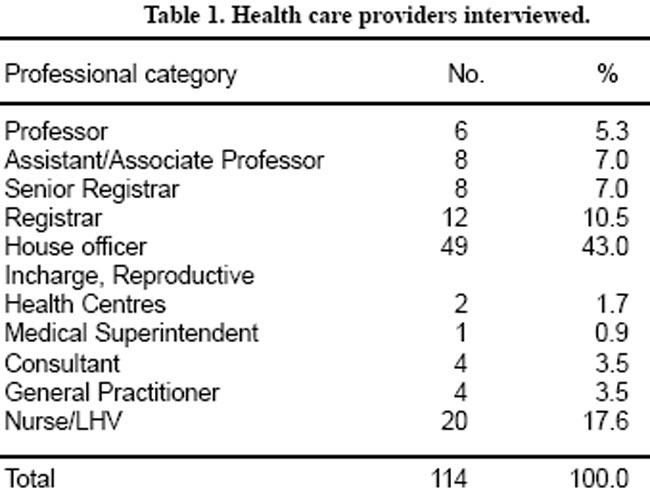 Table 2. Reason for abortion given by health care providers.
All health care providers were aware of the abortion laws of the country. Almost half of them (46.5%) did not think that any change was necessary, 37.5% wanted the law to be changed while 16.1% did not express any opinion (Table 3). 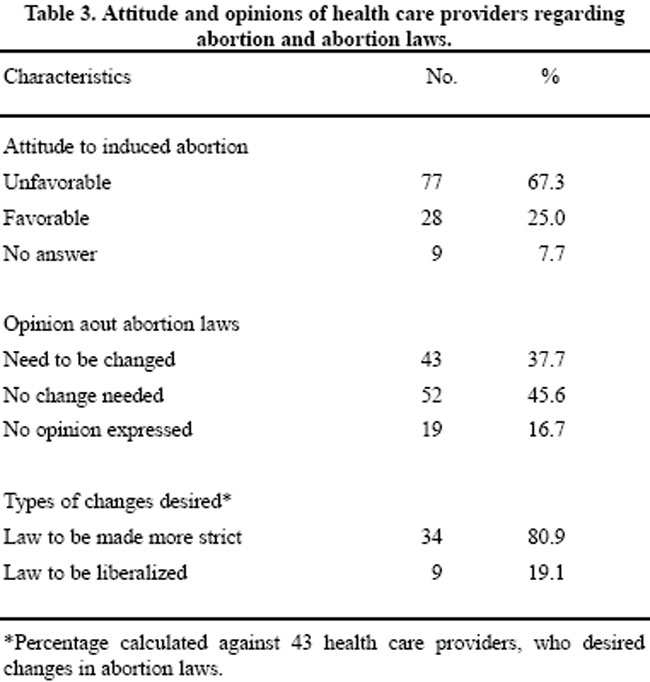 Surprisingly 80.9% of those, who wanted the law to be changed, said that the existing law was too liberal and this should be made more strict. Only 19.1% wanted the abortion law to be liberalized (Table 3).

Although the legal status of induced abortion is not the only factor influencing women's ability to access abortion services, it remains a key determinant. Where access to abortion is restricted by law, medically trained practitioners are usually less willing to provide the service, the cost of services in private facilities is high and services are rarely available in public hospitals, which are often the only source of safe medical care for low income families. Since in such countries, training in abortion procedures is not routinely provided to the physicians, out-moded medical procedure may be used to provide the services. Fear of prosecution may even effect physician's treatment of women with complications arising from abortion.10
Table 3. Attitude and opinions of health care providers regarding abortion and abortion laws.
*Percentage calculated against 43 health care providers, who desired changes in abortion laws.
Two most common reasons for seeking abortion (Table 2) were unwanted pregnancy (55.2%) and contraceptive failure (23.8%). Both these situations call for effective information education and counseling (IEC) campaigns aiming at specified target group emphasizing he fact that abortion cannot be used as a mean of family planning. The reason cited by health care provided are similar to those reported in a large study conducted by Rehan.3
The patients seeking abortion are often treated in an unprofessional manner, when there is a conflict between the values of the patient and those of health care providers.11 Many studies have documented the similar phenomenon.12,13 These studies reveal that women are unwilling to seek care from facilities that make them feel uncomfortable or where they have been treated badly.
In our study, the majority of health care providers (67.3%) had an unfavorable attitude to induced abortion. Among those 37.7%, who wanted the present abortion law to be amended, 80.9% wanted the law to be made more restrictive. Some of them suggested registering a criminal case against those who perform an abortion. This attitude of health care providers may prove to be a major stumbling block to the development of better abortion related services in order to reduce maternal mortality and morbidity.
The situation cannot be considered unique to Pakistan. Since the issue of induced abortion involves a lot of moral and ethical questions, the physicians all over the world are divided on this issue. Apart from physicians' personal convictions, the attitude of the society also effects the development of abortion services. A survey of all family physicians, obstetricians-gynecologists and general surgeons working in a rural area of Idaho, USA conducted in 1994 revealed that less than 4% physicians performed abortions.14 Physicians reported that they do not provide abortion services because of both their own moral objections and local community objection to the procedure.
The studies conducted to explore the determinants of physicians' attitudes to abortion identify two main factors: physicians' training and religion. Gonzalez et al15 found that as a professional group, the physicians have taken a conservative stance towards abortion. Their attitudes are to a great extent influenced by the medical training they receive. Shanahan et al has also reported similar findings.16 They found that even after controlling for differences in residency training in abortion, beliefs were significantly associated with current practices. Abortion is included in formal residency training in Pakistan. However, as evident from the results of the present study, only 25% of the physicians have a favorable attitude to induced abortion. This substantiates Shanahan's finding16 that personal beliefs affect the practices more significantly than the training.
Another important factor affecting the physicians' attitudes to abortion is religion. Studies from both developed countries17-19 as well as from developing countries9,20 confirm this finding. The physicians who had a more religious outlook were less likely to approve of abortion.
In Pakistan, 86% population is Sunni Muslim. Gursoy21 has summarized the Islamic point of view on abortion. According to him, while in medieval Islam, contraception enjoyed widespread tolerance, positions on abortion were not consistently clear. Though there was no simple single religious position on abortion, historically it was largely tolerated. The debate hinged on the fundamental religious and legal question concerning the point at which the fetus could be considered a human being.
Among Sunni Muslims, there are four schools of thought (Fiqah) with somewhat differing approaches towards abortion. In Pakistan, the majority of the Muslims follow Hanafi school of thought. The Hanafi jurists have permitted abortion until the end of the fourth month of pregnancy.21 It is significant that the Hanafis granted the pregnant women the right to abort even without her husband's consent but suggested that she could not do so without reason. However, inspite of this liberal view of jurists, abortion in Pakistan is still considered a sinful act. This may be the reason that majority of the physicians have an unfavorable attitude to abortion.
Inspite of restrictive legal status of abortion, a large number of abortions are conducted in the country. However,unlike western or African countries, where most abortions occur among unmarried adolescents or those in non-marital union, the majority of induced abortions (91.5%) in Pakistan take place among married women. The morbidity or mortality associated with abortions, thus, has greater ramifications and social impact. The ground realities call for liberalization of abortion laws. Since liberalization of laws will not be possible without the support of Ulema (religious scholars) and politicians, they should be apprised of the gravity of this situation.

Background: Though the Penal Code of Pakistan makes provision for abortion if the life of the mother is endangered, yet the fact that no data is available concerning legally induced therapeutic abortion, indicates restrictive interpretation of the law by the medical profession. There is considerable difference of opinion regarding medical indication for termination of pregnancy among practicing gynecologists in Pakistan. It was, therefore, proposed to carry out a survey of health care providers\' attitudes towards induced abortion, their awareness of abortion laws of the country and views regarding the existing laws.
Methods: One hundred and fourteen health care providers were interviewed to study their attitudes to induced abortion and existing abortion laws. Out of them, 92.1% had come across cases of abortion during one month preceding the interview.
Results: The majority of health care providers (67.3%) had an unfavorable attitude to induced abortion. Only 25% favored induced abortion. All health care providers were aware of the abortion laws of the country and 46.5% did not think that any change was necessary. Only 37.7% wanted the law to be changed. Surprisingly 80.9% of those, who wanted the law to be changed, said that the existing law was too liberal and this should be made more strict. Only 19.1% wanted the abortion law to be liberalized.
Conclusion: Inspite of restrictive legal status, a large number of abortions are conducted in the country. The ground realities call for liberalization of abortion laws. Since liberalization of laws will not be possible without the support of Ulema (religious scholars) and politicians, they should be apprised of the gravity of this situation JPMA 53:293;2003).