Unsafe abortion is defined by WHO1 as a procedure for terminating unwanted pregnancy either by persons lacking the necessary skills or in an environment lacking minimal medical standards, or both. Each year, millions of women have an unwanted pregnancy. Some of these are carried to term and others end in induced abortion. It is one of the most neglected healthcare problems in developing countries and a serious concern to women during their reproductive lives.. Millions of abortions are performed outside the legal system, often by unskilled personnel. It is estimated that each year, 20 million unsafe abortions take place worldwide.2 Ninety five percent of these occur in the developing world. Women, who are managed by unskilled personnel at unauthorized facilities, put their lives at risk. Of the 78,000 estimated annual deaths from unsafe abortion, nearly half occur in Asia.3
Apart from the associated mortality, health professionals and social scientists have long acknowledged the adverse consequences of unsafe clandestine abortions. These sequels include chronic pain, infertility or pelvic inflammatory disease. This study reports the severity of complications of unsafe abortions and optimum ways of their management.

This study was carried out in the Department of Obstetrics and Gynaecology, Jinnah Postgraduate Medical Centre Karachi between January 1997 and September 1998. This is a tertiary care public hospital catering mostly to poor and lower middle class population. A record of all patients presenting with abortion to outpatient or emergency departments was reviewed. Patients were also followed up in gynaecological, surgical or other departments as indicated. Records were also collected and crosschecked against case files, operating theatre, admission and discharge registers.
Age of the patients, parity, socioeconomic status, duration of gestation and presenting complaints were recorded. Type of abortion, method used, person performing it, details of management, outcome and complications were also analysed.

During the study period from 1st January 1997 to 30th September 1998, 1534 women were admitted with the diagnosis of abortion. Of these, 93 (7%) acknowledged to having abortion induced.
Profile of Patients
Their ages ranged between 15 and 45 years. Majority (51%) were between 26 and 35 years. Only 14% of them were nulliparous including 9 who were unmarried. Majority (50%) were married grand multiparous who did not want any more children The period of gestation at the time of termination is shown in Table 1.

In 43% it was 8 weeks or less. In some, the pregnancy was not even confirmed by any test, but they opted for a termination for fear of being pregnant. Four women were more than 20 weeks pregnant at the time of termination.
Table 1. Gestational age in weeks at abortion (n=93).
Status of Abortionist
Dais and lady health visitors had induced the abortion in nearly two thirds of patients. In about 30% doctors had done so. Two patients had induced the abortion themselves by taking oral tablets and injections (Table 2). They went to local medical practitioners with incomplete abortion and had instrumental uterine evacuations, leading to complications. Following this, they presented to hospital.
Methods of inducing Abortion
Instrumentation of the uterus was the commonest method of inducing abortion in 60 (65%) patients (Figure). Traditional methods like insertion of Laminaria tents were also used. A number of women had resorted to more than one method for termination of pregnancy. Four women had elective therapeutic terminations of pregnancy carried out by doctors in outside clinics. The indications included ovarian malignancy and Ebstein's anomaly. One each had had a total hysterectomy with bilateral salpingoophorectomy (TAH+BSO) and a hysterotomy with tubal ligation (TL). These women were admitted postoperatively, with sepsis or haemorrhage.
Table 2. Status of abortionist (n=93). 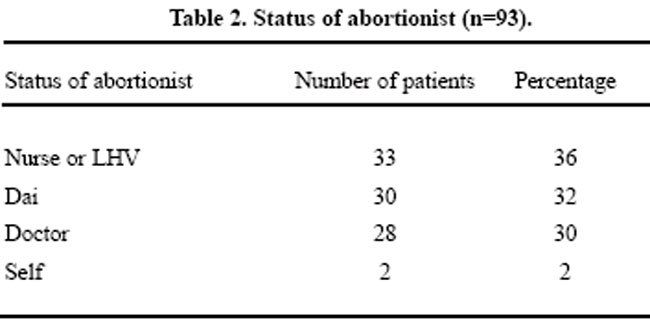 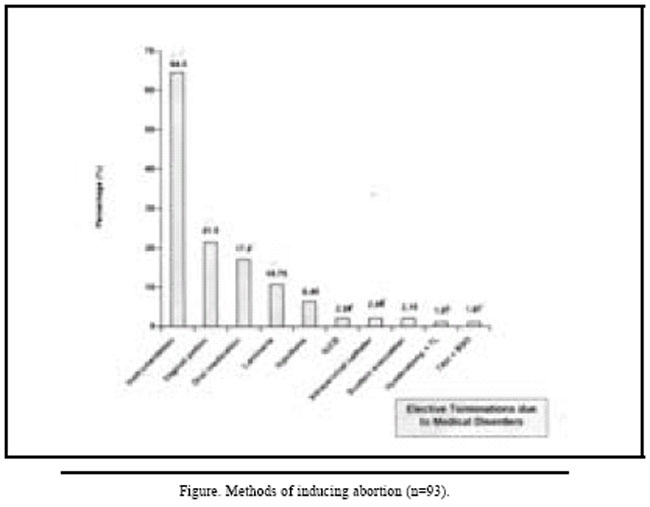 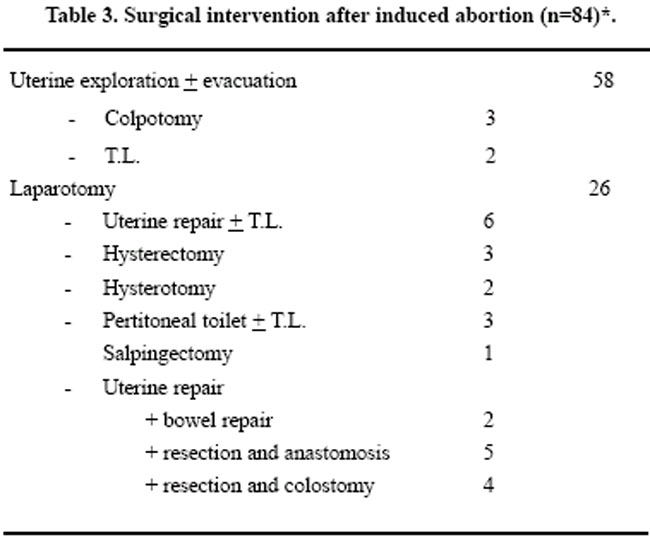 Table 3. Surgical intervention after induced abortion (n=84)*.
*2 expired without surgical intervention, 2 refused to have surgery and left against medical advice, 5 were managed conservatively
Management
Nearly all of these women required general resuscitation measures like rehydration, correction of electrolyte imbalance and chemoprophylaxis for treatment of infection. Some form of surgical intervention was essential in 84 (90%) of them. This ranged from exploration and completion of evacuation of uterus in 58 patients (Table 3), to extensive procedures as laparotomy, including hysterectomy, bowel repair, bowel resection and colostomy.
Prior to being allowed home all of these women, barring those who had a hysterectomy or tubal ligation, had counseling sessions with staff of the Reproductive Health Center affiliated to the department. They were given supplies of contraceptives chosen by them and advice to return to the Center for follow up.
Mortality and Morbidity
Nine of 93 women died. These included one who was pronounced dead on arrival. Five died due to severe septicaemia and three had fatal faecal peritonitis subsequent to bowel trauma (Table 4).

The associated morbidity was due to shock, leading to reversible renal failure in two, septicaemia and anaemia. In those who required colostomy, psychological trauma and stoma care were additional problems.
Table 4. Induced abortion - mortality and morbidity.

Worldwide, hundreds of thousands of women are affected by unsafe abortion each year. The associated morbidity and mortality makes it a major public health issue for policy planners. It is also a taxing and ethical dilemma for healthcare providers.
The circumstances in which a woman resorts to terminating an unwanted pregnancy are familiar to most. In a conservative segregated society like ours, unsafe abortion is primarily a problem of the married woman who uses it as a tool to limit the size of her family.4,5 The decision to have a pregnancy terminated is by no means easy. This is evident in the present study, where the procedure was delayed in some instances till the pregnancy was beyond 20 weeks. On the other hand, for some others, the possibility of carrying an unwanted pregnancy was so loathsome that that a termination was attempted even prior to confirmation.
It is perhaps a valid argument that unsafe abortion can be prevented by preventing unplanned pregnancy.6,7 An effective strategy towards achieving this objective would be better availability and access to Family Planning services. Unfortunately the reasons for opting to terminate a pregnancy are far more complex.8 Women are frequently not able to determine and control all circumstances of their lives.9 Socioeconomic, cultural, psychological and societal factors play a significant role. These, combined with disempowerment in relationships and financial constraints reinforce the woman's need for abortion. A need that is stronger than all other considerations, including religious ones.10,11 In countries where abortion is legal, the mortality and morbidity associated with it has declined significantly.12 Despite this, even there, many women resort to have clandestine procedures carried out by back street abortionists. This is because of social stigma and fear of being ostracized by family and community. Ambiguity in the status of abortion and inadequate legal services contribute as well.13
It is likely that many of the 'spontaneous' abortions are in reality induced and some are more likely to develop complications than others.14 Many such cases present with complications like incomplete evacuation and haemorrhage following induced abortion and are treated at health facilities, without facts coming to light. Often there is delay in seeking help even after serious complications develop. This is also a reflection on lack of social support, access to health services15 and an efficient referral system.16 Unlike uncomplicated abortion17, the role of conservative management here is limited. In these complicated cases, aggressive management is frequently indicated18 and the delay adversely alters the prognosis.19-23 Most of these women require surgical management18,23-26, as was required in 90% of our cases. This intervention ranged from exploration and evacuation of the uterus to extensive surgery involving bowel resection and colostomy. Intestinal injury, especially of the colon and ilium can follow uterine perforation.23,27,28 Suspected intestinal injury necessitates urgent surgical intervention and it is worth remembering that the operative procedure adopted has a direct bearing on outcome. A dysfunctioning colostomy is thought to improve the chances of survival.23
The mortality in this series was 10%. This is similar to other series.24,26,29 Because the consequences of unsafe abortion are so grave, health facilities should be well equipped, and have health personnel, well trained to manage complications safely and efficiently.30 Unfortunately, even if these women are lucky enough to reach a health facility, they often receive poor quality treatment from overworked staff. Even if their immediate health crisis is resolved, they are seldom offered Family Planning Services and their other Reproductive Health needs are left unmet. Post abortion care merits special attention. This encompasses the medical and surgical management as well as assessing the psychological impact of the event and instituting ways to overcome it.31
These women are at a high risk for further terminations of pregnancy. Counseling for effective Family Planning, including emergency contraception, should be the cornerstone of any such effort. Preventing another unwanted pregnancy will minimize the need for another unsafe abortion.32-34.

Objectives:
To determine the severity of complications of unsafe abortion and optimum ways of managing them.
Setting:
Department of Obstetrics and Gynaecology, Jinnah Postgraduate Medical Center, Karachi.
Material and Methods:
Ninety three women presenting with complications of unsafe abortion were followed up by interviews and records from case files, admission, operation theater and discharge registers. Age, parity, marital and socioeconomic status of these women was recorded. The clinical features, period of gestation, method used and status of abortionist were noted. The details of management, complications and outcome were also analysed.
Results:
Majority (51%) were married women aged between 26 and 35 years. Grandmultiparae constituted 40.5% and only 14%, including 9 unmarried women were primigravida. Untrained birth attendants performed the procedure in 32% and doctors in 30%. Instrumentation of the uterus was the commonest method of induction, used in 65% of cases. Some form of surgical intervention was required in 90%. Septicaemia, bowel injury and haemorrhagic shock were significant complications, while the mortality rate was 10%.
Conclusion:
Only women with significant complications after unsafe abortion are likely to present to hospital, therefore optimal, timely management, including surgical intervention is indicated to improve outcome (JPMA 53:286;2003).