Background:Axillary lymph node involvement in primary breast cancer is one of its most important prognostic features. Thus any factors that may predict axillary lymph node involvement in this setting could be potentially helpful in treatment planning and other interventions.
Objective:The objective of this study was to evaluate clinical, pathological and immuno-histochemical markers in univariate and multivariate analysis, which may be helpful predictors of axillary lymph node involvement in breast cancer.
Method:A retrospective analysis of 555 cases. Of these 58% had axillary nodal positivity and 42% were negative.
Conclusion:Factors of no significance included patient’s age, height, weight, age of first pregnancy, parity, marital status, menopausal status, family history of breast cancer, side of tumor. In univariate analysis the age of menarche, duration of symptoms, tumor size, site in outer quadrant, S phase and skin and nipple involvement all predicted axillary nodal involvement. The length of breast-feeding, increased intraductal component and increased PCNA were inversely proportional to nodal involvement. In multiple regression analysis however only size of the tumor, involvement of the skin and nipple and disease in the outer quadrant of breast were the factors, which assumed significance (JPMA 52:1 92;2002).

Axillary node involvement is one of the most important prognostic factors for clinical outcome in breast cancer1,2. In addition the presence or absence of axillary lymph node involvement by tumor often dictates whether or not a patient will require adjunctive chemotherapy and/or radiotherapy. Furthermore, the number of axillary lymph nodes involved may help to choose the type and intensity of chemotherapy used3. It is therefore important to study the clinical, histopathological and molecular factors, which may predict axillary lymph node involvement in primary breast cancer. The potential impact of these factors assumes greater significance in those instances when axillary dissection is not carried out. These factors may also help in understanding the biological behavior of breast cancer.
It is increasingly appreciated that ethnic differences may result in a different biological behavior of the same disease in patient populations4. There is much data on the behavior of breast cancer in different ethnic groups from a country such as the United States. These ethnic groups include the black, hispanic, white and other population groups5. Studies have indicated for example that breast cancers may have a different outcome in these groups when they are compared to each other. Data of such a nature from our part of the world are sparse. We therefore, analyzed the breast cancer database at the Aga Khan University Hospital
(AKUH) to identify factors that may have a role in predicting axillary lymph node involvement in the Pakistani female breast cancer patient population.

This was a retrospective analysis based on our breast cancer database. The breast cancer database includes patients seen at the AKUH and all the referred cases from elsewhere between the years 1990 to 1998. A format has been designed to capture relevant clinicopathological information. Cases that had been diagnosed at other hospitals however had as expected a variable format for histological reporting. All immunohistochemical and prognostic marker studies were performed in the pathology department of the AKUH.
Histological and Immuno Histochemical Methods
Breast specimens including modified radical mastectomies, simple mastectomies, wide local excision and lumpectomies with axillary content and axillary node dissection were received from all over the city and country through the main laboratory and 26 collection points. Specimens were fixed in 10% buffered formalin solution. The specimens were grossed as per standard protocol, which always included the measurement of tumor size and positivity of the excision and posterior margins in the surgical specimens and retrieval of axillary nodes.
A minimum of 2 or 3 sections were submitted from the tumor mass. Immunohistochemical studies were performed on formalin fixed, paraffin embedded tissue using the peroxide anti peroxide method (PAP). Microwave oven pretreatment was performed for p53, erb2 (Her-2/ neu), proliferating nuclear cell antigen (PCNA), epidermal growth factor receptor (EGFR), estrogen receptor (ER) and progesterone receptor (PR). Anti-human p53 protein, monoclonal mouse antibody clone Do-7 (DAKO, Denmark), rabbit anti human - Her-2/neu oncoprotein (DAKO, Denmark), monoclonal mouse anti-human EGFR, clone EGFR 1 (DAKO, Denmark), polyclonal rabbit anticathepsin-D (California, USA) and monoclonal mouse anti PCNA clone PC 10 (DAKO, Denmark) were used. To study estrogen and progesterone receptor status monoclonal mouse anti-human ER clone 1D5 (DAKO, Denmark) and rabbit anti-human progesterone receptor (DAKO, Denmark) were employed. Paraffin sections were cut from tissue block then incubated at room temperature (22-25o C) for 90 minutes with primary antibodies at 1:20 ul for ER and PR each, 1:10 ul for EGFR, 1:25 ul for p53, HERIneu and Cathepsin D each and 1:100 ul for PCNA. After extensive washing, slides were incubated for 45 minutes with secondary antibody. After a second washing step the slides were incubated for 45 minutes with PAP complex. 3,3 diaminobenzidine tetrachloride was used as the final chromogen. Nuclei were stained with hematoxylin.
The tumor cells were assessed semi-quantitatively for estrogen and progesterone receptors taking both the intensity and distribution of specific staining. Percentage of positively stained tumor cells were grouped into five categories - zero (no staining), 1 + (weak but detectable), 2 + (mildly distinct), 3 + (moderately distinct) and 4 + (strong). For each specimen the score was obtained by summing the percentage of cells staining at each intensity multiplied by the weighted intensity of staining. A score of’ less than 74 was taken as negative, 75 - 99 as weak positive, 100 - 119 as intermediate positive and greater than 120 as strongly positive.
For PCNA a tumor cell was designated as positive when there was any discernable nuclear staining. The percentage of positive cells was determined in most immunoreactive areas.
Immunohistochemical stains for Her-2/neu and EGFR were interpreted as positive if membrane staining was seen and this was graded semi-quantitatively on the intensity of staining and number of cells stained and the absence of staining was considered negative, 10% staining as +, 25% as ++, 50% as +++ and greater than 50% as ++++. Cathepsin D staining exhibited as nuclear and cytoplasm staining respectively and was graded for positivity semi quantitatively on a scale of ++ to ++++ using similar criteria as above.
Statistical Methods
Data was summarized as the means with standard deviations for continuous variables and as frequency and percents, odds ratio and 95% confidence intervals (CI) for categorical variables. Chi square tests examining the association (lymph nodes involved versus not involved) and breast cancer related factors were performed. Differences in means were evaluated by the students t- test. A p-value of <0.05 was considered statistically significant.
Independent Predictors of Lymph nodes involvement among the breast cancer cases were evaluated by multiple regression analysis. In the logistic regression model lymph node involvement was the outcome variable. The analysis was carried out using the statistical software SPSS version 8.0 by a qualified statistician (AS). 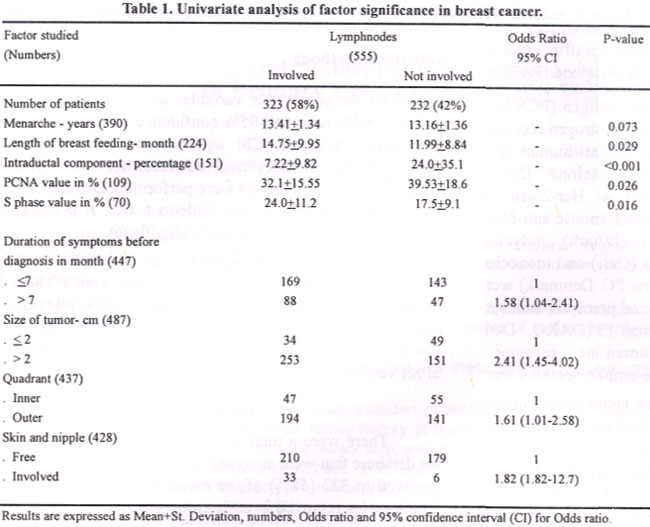 These factors included the age of menarche, length of breast-feeding in months, the duration of symptoms before presentation to the clinic, disease in the outer quadrant of the breast, skin and nipple involvement and tumors greater than 2 cms in size and the intraductal component. Molecular features of significance included the PCNA value in percentage and the S phase percentage. Thus when these characteristics were present the tumor had a greater propensity to involve the axillary nodes except inversely for the intraductal component and the PCNA. In multivariate analysis however only the tumor size, skin and nipple involvement and disease in the outer quadrants of the breast were predictive for axillary node involvement (Table 2).

There are several factors, which are increasingly recognized as having an effect on the biological behavior of breast cancer. These include the clinical and demographic features, pathological characteristics and the molecular factors within the breast tumor itself6. The exact role that each of these may have on the biological behavior of breast cancer is an area of increasing interest, including their role in the regional spread of the disease. However their impact on treatment until now continued to be an area of research interest only6,7. Recently for example, the monoclonal antibody Herceptin has been developed which specifically targets the Her-2/neu positive cells and is approved for therapeutic use in patients who are HER-2/neu positive with breast cancer8.
Axillary nodal status in breast cancer is the single most important factor predicting the prognosis in this disease and thus factors which influence its positivity may provide useful clinically applicable information. It is possible that if factors are identified to have a significant impact on axillary nodal spread of disease from the primary breast site then these factors could be used as tools for regional treatment planning especially in those instances when axillary lymph nodes sampling is not carried out or when the sentinal node is sampled9. This issue may be of greater importance when neo-adjunctive chemotherapy is used10 and conversely when the size of breast cancer is small. The latter occurs when screening mammography is employed11. It is known for example that the larger a breast cancer the greater is the likelihood that the axillary lymph nodes will be positive for tumor. Nevertheless axillary nodes can also be involved when the breast cancer size is small12-17.
In this study the factors predicting axillary lymph node involvement were relatively few. Factors in univariate analysis that were important predictors of axillary node are listed in Table 1. In our patients there are some factors that deserve comment. In the group with the higher component of intraductal disease a lesser percentage of tumors had nodal involvement. This seems to be the opposite of what would be expected. Similarly one would expect more metastases with an increased PCNA percentage and this was not noted in our study. Interestingly also the greater the length of breast-feeding the greater the likelihood of axillary node involvement. This observation is at odds with the known protective effect of breast-feeding in breast cancer. In multivariate analysis however only the size of the tumor, skin and nipple involvement and the presence of disease in the outer quadrant predicted axillary node involvement by breast cancer. Further larger data are needed from Pakistan in this regard. All of these observations serve to emphasize the heterogeneous nature of breast cancer and the literature on this aspect of the disease.
Other authors have also attempted to predict axillary lymph node involvement. Factors of importance have included the patient’s age, tumor size, S phase fraction, ER status, tumor micro vessel involvement etc. These have some bearing on axillary metastasis but these are not consistent features in all reports15-18. There is a great explosion of knowledge in the various molecular markers in breast cancer, for example the importance of the P-53 gene, and HER2/neu gene. These are important in the clinical behavior of breast cancer and possibly the treatment implications but their role in disease spread at this time is uncertain1,16.
This study is an attempt to identify predictive factors in breast cancer important for regional axillary node spread in our clinical setting. Our numbers however are still modest in some areas such as the molecular markers tested. In poor countries the cost of such tests cannot be borne by the patients at large. Nonetheless wherever information is available, it would be useful to analyze it for local relevance. The availability of modem tools of investigations when the disease presents in an advanced manner and where axillary nodal involvement may be expected can serve as a useful means in understanding some of the biological and clinical behavior of breast cancer. It is possible that this information can be translated to treatment strategies in early stage breast cancer as well.