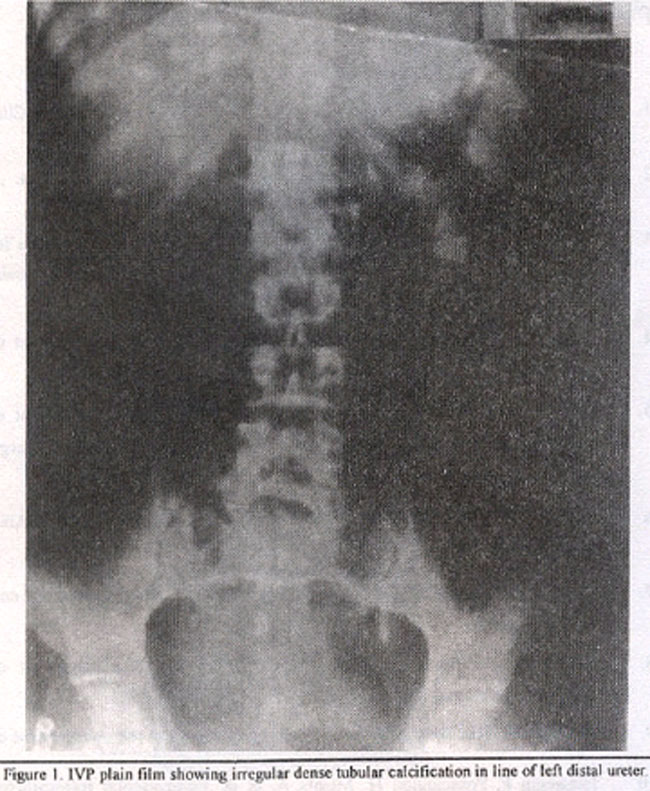 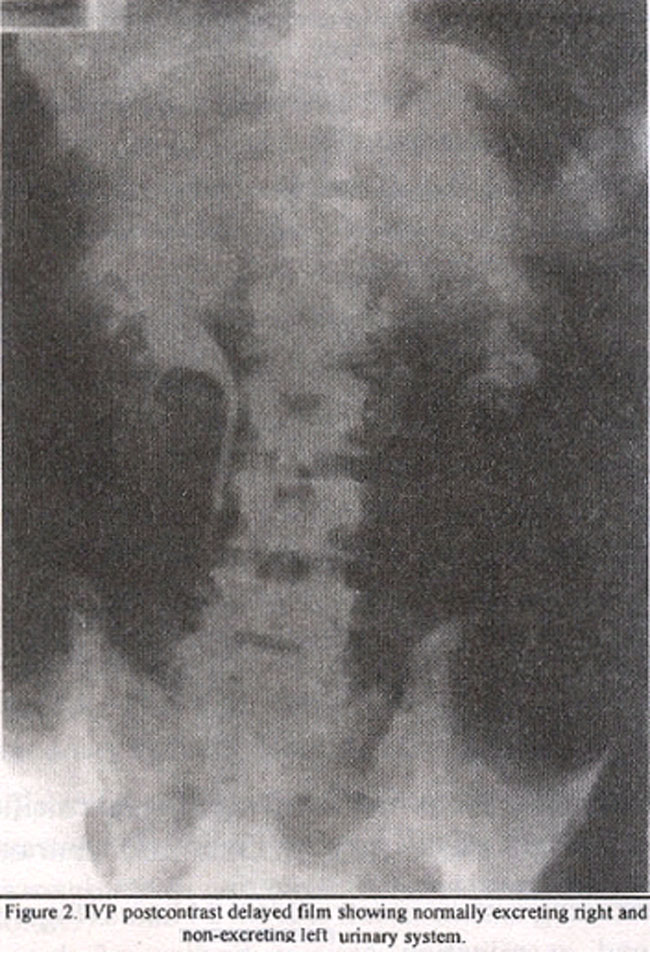 Ultrasound examination gave a finding of dense irregular calcification with distal shadowing in left renal area and the normal kidney was replaced by this calcification.
Diagnosis: Left sided tuberculous autonephrectomy.

Tuberculosis of the urinary tract continues to be an important clinical problem due to its non-specific clinical presentation and a variable radiographic appearance. Predominant between second and third decades, men are affected more frequently than women. More than half of the patients have some lung abnormality indicative of past pulmonary tuberculosis. Clinically the patient presents most commonly with irritative symptoms and less commonly with fever, anorexia, and weight loss1. Mycobacteriurn tuberculosis is the causative organism of urinary tract tuberculosis. Discharge of M. tuberculosis from an active source of infection leads to the formation of miliary tuberculomas in the kidneys. Few tubercies regress while some enlarge and rupture into a nephron producing tuberculous bacilluria without a radiographic lesion.
The granulomas affect the medulla and the papillae and coalesce to form a cavity communicating with the pelvicalyceal system. There is resultant destruction of the parenchyma with localized hydrocalicosis due to stricture of the infundibulum or the caliceal neck. Finally, autonephrectomy of the kidney leads to a non-functioning calcified kidney. The involvement of the ureter occurs due to passage of infected urine through the ureter or refluxly from an infected bladder leading to mucosal wall ulceration, fibrosis, stricture and calcification. Bladder cystitis leads to a small capacity bladder called a thimble bladder.
Technology has permitted significant advances in imaging and early diagnosis and treatment of many serious urinary tract infections2. Each modality has its own contribution. Early changes are best evaluated with urography/pyelography and chronic changes are best evaluated with ultrasound/computed tomography. Imaging procedures are of limited value until a proven bacteriologic diagnosis is made3. Plain films are done to evaluate lung lesions and abdominal calcification of adrenals, lymph nodes and in the renal areas. Excretory urogram is the modality of choice for the visualization of pelvicalyceal system and helps in the early detection of renal tuberculosis. Ultrasonography demonstrates focal renal lesions with an echogenic border and central area of low echogenicity. It also shows calcification and perinephric abscesses. Computed tomography helps in the detection of fine calcifications and presence of disease in the adjacent genital tract. Treatment consists of antituberculous chemotherapy in all patients in combination with surgery and/or endoradiological procedures. Nephrectomy is indicated for non-functioning tuberculous kidneys in order to prevent the development of hypertention, abscess and fistulas formation.