Vertebral artery (VA) pseudoaneurysms are exceedingly rare and usually follow penetrating or blunt trauma. Injuries of these arteries are far less common than extra cranial carotid arteries possibly because of their protected anatomic location along the vertebral 1 Sequels of such injuries include arteriovenous fistulae and pseudoaneurysm. Because of the rarity of the sequel, the incidence of which is unknown and the protected anatomical location, the management of such lesions is complicated2,3. The surgical approach to the VA is technically challenging and generally unfamiliar even to the vascular surgeons with considerable trauma experienced4, resulting in unnecessary morbidity and mortality. Innovations in the interventional radiology have made transcatheter embolisation of VA possible especially in stable patients hence modifying the management of injured artery.
We report a case of iatrogenic VA pseudoaneurysm, which presented to us four months after cervical discectomy surgery and was treated successfully by ligation of the VA.

A 60 years old housewife sustained head and neck trauma in a road traffic accident, following which she developed neurological symptoms including numbness, weakness and pain in both upper limbs. These symptoms became severe over a period of two months especially on the left side. On examination the muscle power of the left arm was 3/5 and she was unable to move the arm because of pain. MRI of the neck was performed and a diagnosis of cervical disc prolapse was made. She underwent cervical discectomy in April 2000, which was uneventful except for excessive pen-operative bleeding which stopped after applying pressure. Following the operation her neurological symptoms improved but a month and half later she developed difficulty in swallowing and felt pulsation in the throat. The swallowing got worse and reduced to liquids because of the osseous canal which protects it; it can still only. She also noticed a swelling in the left side of the neck, which was labeled as an abscess on ultrasound scan. Patient was taken to the theater for incision and drainage of the abscess. On making the skin incision the swelling was noticeably pulsatile, the skin was closed and arteriogram was performed which revealed a pseudoaneutysm of the vertebral artery arising from its intra-spinal part at the level of C3 - 4 (Figures 1 and 2). 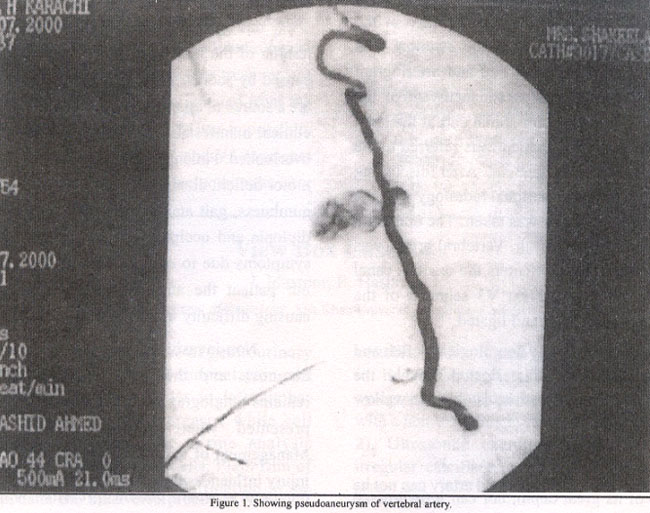 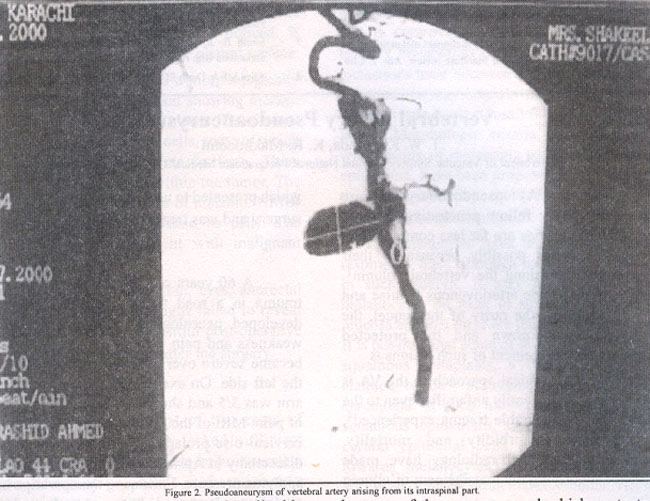 The patient was referred to the vascular team for further management. After discussing different options including interventional radiology with the patient, a decision for open repair was taken. The operation was performed by anterior approach. Vertebral artery was dissected out at its origin before it enters the osseous canal (V2 segment) and was ligated. Next V3 segment of the vertebral artery was dissected out and ligated.
Patient woke up without any neurological deficit and remains well after twelve months. Postoperatively the symptoms have improved and now she is able to swallow solids.

Sanson in 1836 wrote “the vertebral artery can not he ligated, on account of its great depth, nor can it be pressed less be cauterized. The wound of this vessels are beyond the resources of act “. latrogenic VA pseudoaneurysms follow penetrating trauma of the neck and like the dissecting VA aneurysm, caused by sudden violent rotational movement of the neck, are a source of appreciable morbidity and morality1.5. Since clinical manifestations are delayed, these injuries are often overlooked. Patients may present late with hemi-sensory or motor deficit, dizziness, syncope, vertigo, tinnitus, peri-oral numbness, gait ataxia, dysarthria. deathess, poor memory, diplopia and occipital or neck ache6. On the other hand symptoms due to compression by the aneurysm varies. In our patient the aneurysm was retrophaiyngeal and was causing difficulty in swallowing.
Non-invasive investigations have little value in the diagnosis and the gold standard diagnostic modality remains angiography2,7. This was evident in the case presented where ultrasound scan was unhelpful. Management of the VA injuries varies. The location of the injury influences the management. Immediate exploration is mandatory when patient presents with uncontrollable bleeding, expanding haematomas or airway conipromise4.
But in situations where patient is stable and vascular injury is clinically suspected in the presence of penetrating neck wound, immediate angiography is mandatory4. However, in symptomatic patients if routine angiography is not performed, lesion may be missed3. On the other hand majority of asymptomatic patients can be managed safely without intervention3,8,9. Where the patient presents late and has developed VA aneurysm or has arteriovenous fistula, the options available to the surgeons are surgical exploration or radiological intervention. The ligation of VA is not free of complications. The incidence of brainstem ischaemia following unilateral VA ligation is 3.1% for the left and 1 .8% for the right. In the largest series of VA trauma2, Reid and Weigelt suggested that surgical exploration with proximal and distal ligation should be the procedure of choice. Similarly Meises et al11 claimed that surgical ligation could be employed if contralateral VA is normal. Others believe that pseudoaneurysms should be repaired and reserved for patients whose angiography demonstrate inadequate collateral circullation10,12.
With the advances in the radiological interventions more and more patients are being treated by embolisation of the aneurysm or occlusion of the vertebral artery by detachable balloon13,14. Our patient declined radiological intervention, which we believe should be the treatment of choice. As the aneurysm in our patient originated from the V2 segment of the VA, dissection of its neck was impossible. So the vertebral artery was ligated at VI and V3 segments above and below the pseudoaneurysm. Twelve months later patient remains well and can swallow solid food as well.