Malignant melanoma involving the respiratory tract is nearly always metastatic in origin and true primary tumours are very rare1. When strict guidelines are applied to the cases reported in literature, many do not display sufficient convincing evidence and can be excluded2.

A 74 years old man was referred by a chest physician for resection of an incidentally discovered solitary tumor in right lung. The patient initially presented with non-specific back pain in October 2000. Subsequent chest X-ray well-circumscribed mass, 40 mm in maximal diameter, that was 32mm from the bronchial margin was noticed. It approached close to, but did not involve the pleural surface. 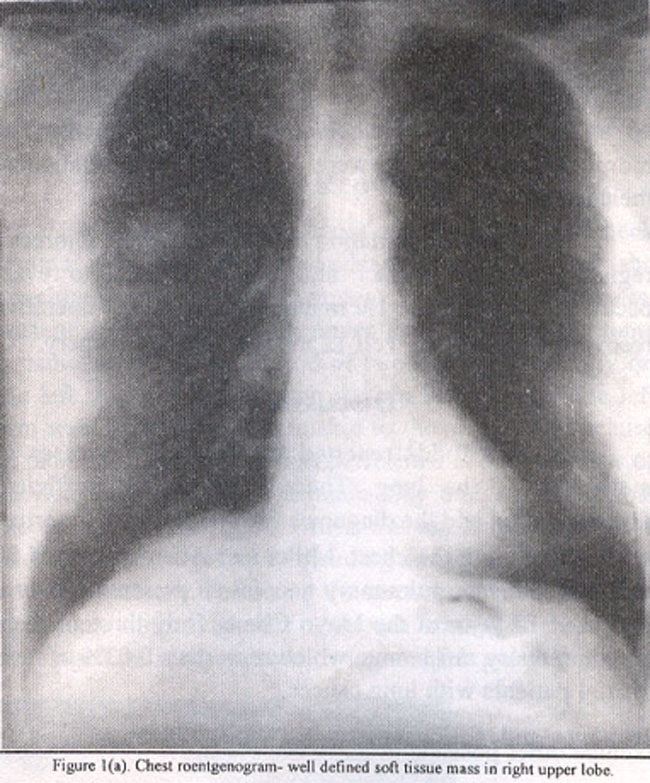 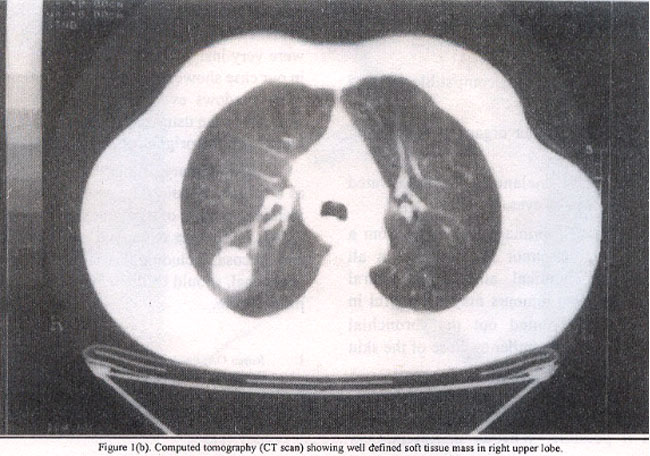 Histology of the tumor revealed a morphologically poorly differentiated malignant neoplasm showing marked pleomorphism with tumor giant cells in places. There was a nesting pattern with some palisading of cells, some of which were epitheloid in appearance and some fusiform. There was considerable amount of pigment within the tumor, The features of the pigment were suggestive of melanin. HMB­45 antigen was also demonstrated within its cells. The morphological features were consistent with malignant melanoma.
Extensive examination of the skin, eyes, anorectal region, genitourinary tract and esophagus failed to reveal occult primary lesions. He made uneventful post-operative recovery and is doing well 12 months after the surgery.

In I 888,Todd3 reported the first of two cases of melanoma of the lung. These cases lacked sufficient documentation and the diagnosis was made on post-mortem studies limited to the chest. Miller and Alien4 reviewed 80 patients with rare pulmonary neoplasms presenting over a period of 10 years at the Mayo Clinic. Only three of them had pulmonary melanoma, which represents 0.03% of their 10,134 patients with lung cancer.
Jennings and colleagues5 used the following criteria to exclude other possible primary sites: no previously removed skin lesion, particularly pigmented; no ocular tumours removed and no enucleation; solitary tumour; morphologic tumour characteristics compatible with a primary tumor; no demonstrable melanoma in other organs at the time of removal; autopsy without primary melanoma demonstrated elsewhere, especially the skin or eyes.
The differentiation of a primary melanoma from a melanin containing carcinoid tumor is necessary in all cases. The immunohistochemical and ultrastrustural differences between these two tumours may be helpful in this regard. Marchevsky6 pointed out that bronchial melanomas are morphologically similar to those of the skin and mucosa.
If a melanoma is encountered and no history or evidence of a simultaneous or previous primary lesion, it should be resected if possible. Whether or not primary melanoma of the lung can be diagnosed in a case such as this is controversial because spontaneous regression of primary melanomas of the skin after regional lymph node metastases have occurred and is well documented7. Such a phenomenon may .explain some of these cases, however, it does not rule out the possibility of true primary pulmonary lesion. Morphologic criteria, such as junctional changes with nesting of melanoma cells just beneath the bronchial epithelium, have been proposed as the key to diagnosis of a primary pulmonary melanoma; however, such criteria remains to be substantiated8.
Melanocytes have not been reported in the lower respiratory tract, although melanomas apparently can arise in such mucosa. It may be argued that undiscovered melanocytes do exist in small numbers in the bronchial mucosa and that these are the origin of bronchial melanoma. It is possible that some of these tumors originate in areas of squamous metaplasia, a sequence which is frequently claimed to be important in the genesis of bronchial carcinoma. If such tumors arise in areas of metaplastic squamous epithelium, this would strongly suggest that certain epithelial cells have undergone differentiation towards melanocytes, or alternatively that biochemical differentiation toward melanin production has occurred within an ordinary bronchial carcinoma. The hypothesis that melanin can be produced by tumors which do not arise from melanocytes appear not unreasonable when considering the wide range of inappropriate hormones and metabolic substances which may be produced by many types of neoplasms.
In our case, the evidence is strongly in favour of a primary malignant melanoma in the chest. As there was no evidence of primary growths anywhere else, the symptoms were very insignificant for months and the roentgenograms in our case showed a single tumor and no appearance of any other shadows even 12 months later, a finding which is contrary to the usual course when metastases develop in the lungs with the original focus elsewhere.
In summary primary melanoma of the lung presents as a solitary nodule. The evaluation and therapy should be identical to those of a patient with nonsmall cell lung cancer (NSCLC), but an extensive examination of the skin, eyes and mucosa, including the pharynx, vagina, esophagus, and anal canal, should be done in an attempt to locate a possible primary site.