Background:Although geographic and racial differences in the incidence of cancer are well recognized, information regarding any dissimilarity in clinico-pathologica! behavior of cancers is scarce. In particular, information from the developing countries regarding clinico-pathologic features of even some of the common cancers such as ovarian cancer is lacking.
Methods:Information was prospectively collected on all patients with epithella! ovarian cancer referred to the National Cancer Institute, Karachi, Pakistan between January 1,1993 and June 30,1998. Information was obtained directly from the patients and a close relative. Medical records were reviewed and radiologic and pathologic re-evaluation was done when necessary.
Results:Two hundred and eighty six patients were accrued. Mean age was 49.5 (±13) years. Most of the well defined risk factors such as early menarche, late menopause, nulliparity, lack of lactation were uncommonly observed. Twenty percent of the patients had a positive family history of cancer. Most of these relatives were young (46.1 years), first degree (68%) and had breast or ovarian cancer. Clinical presentation, histologic features and stage of disease were similar to the North American or European women with epithelial ovarian cancer.
Conclusion:Younger age at presentation and higher frequency of positive family history are two unusual features of Pakistani patients with epithelial ovarian cancer. This suggests a more significant role played by the genetic factors in these patients. Further work is needed (JPMA 52:155;2002).

There is considerable variability in the incidence of cancer and its related mortality amongst different racial groups. Blacks are more likely to develop cancer and have higher mortality than whites, Asian-Pacific islanders, American Indians, or Hispanics1. There are also geographical differences in cancer incidence and mortality with the rates generally lower for Asian and African countries2. It is likely that clinico-pathological features and biologic behavior of tumors may also differ between different races and regions. Outside United States and Western Europe, particularly in non-white populations with the notable exception of Japanese, available information is scarce and documentation from several regions of the world is poor.
Ovarian cancer is one of the most important gynecologic cancers. In United States, it accounts for 4% of all cancers in women and 5% of estimated cancer deaths3. The vast majority of epithelial ovarian carcinomas are diagnosed in post-menopausal women with a median age of 63 years. Although etiology remains unknown hormonal, environmental and genetic factors play an important role in the development of ovarian cancer. Age, ethnicity, early menarche, late menopause, nulliparity, personal history of breast or uterine cancer, family history of breast or ovarian cancer, exposure to talc or asbestos and high fat diet have all been implicated as causative factors4.
In Pakistan, ovarian cancer is the 4th most common malignancy in women. It is the most common cancer of gynecologic origin5,6. No information, however, is available on the clinico-pathological features and biologic behavior of this cancer or if any differences exist between Pakistani and U.S. or European patients. This paper presents prospective information collected on 286 patients with epithelial ovarian cancer with the purpose of making such a comparison.

Information was prospectively collected by the research assistants on all patients referred to the medical oncology service at the National Cancer Institute, Karachi, between January 1,1993 and June 30, 1998. This study was approved by the Institutional Review Board. Eligibility criteria required histologic documentation of epithelial ovarian cancer and ability of the patient andlor a close relative to provide detailed information. Patients with malignant ascites consistent with adenocarcinoma along with an ovarian mass who had not undergone surgery for medical reasons or had refused that option were also included in the analysis. Patients with germ cell or stromal tumors were excluded. Similarly, those cases with ovarian metastases from any other malignancy were also excluded. Information was gathered from the patient and a close relative during an interview that, on average, lasted 20 minutes. Medical records (brought by the patient) were reviewed thoroughly and radiologic and histologic re­evaluation was done when necessary. Early menarche was defined as age <11 years at the onset of menarche. Late menopause was defined as age >51 years at menopause. Epi Info statistical package (Center for disease control, Atlanta, Georgia) was used for statistical analysis.

Two hundred and eighty six patients were accrued to the study. Mean age of the patients was 49.5+l3 years (Table 1). 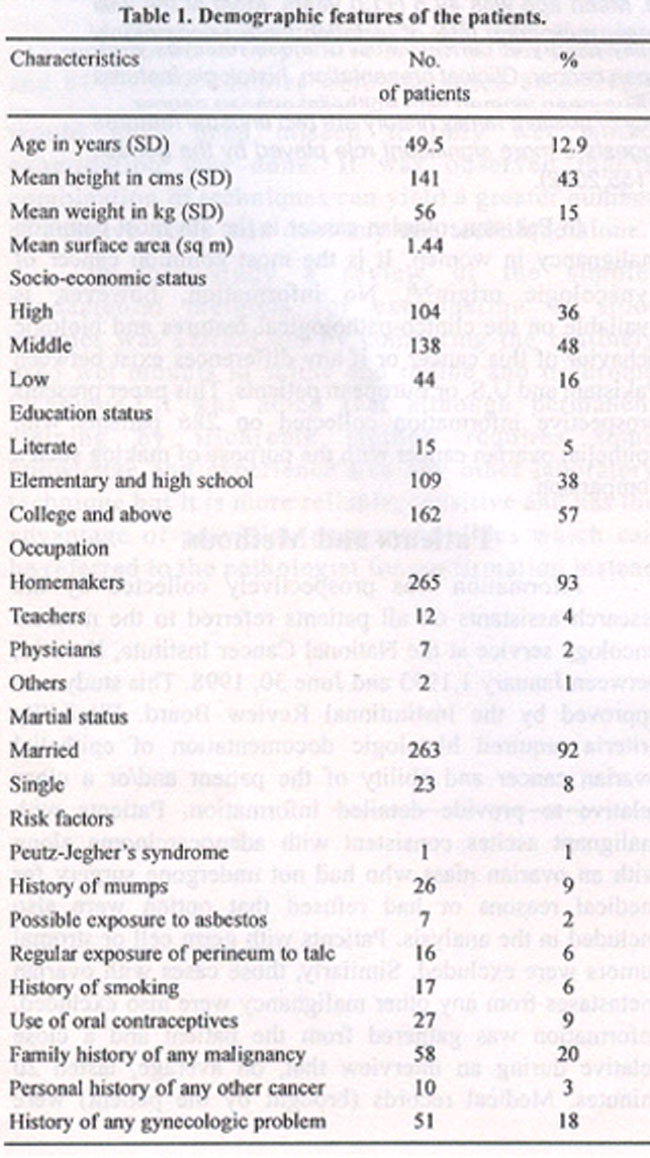 Most belonged to middle or upper socio­economic class and were well educated. Only a few patients had any of the well defined risk factors (Table 1). One striking difference is the number of patients with family history of cancer (20%). Most of these were ovarian, or breast cancers (90% of cases). Sixty eight percent of the relatives with cancer had first-degree relationship with the patient. Mean age of these relatives was 46.1 ± 10.2 years. Five percent fulfilled the criteria for hereditary ovarian cancer (IIOCS) primarily breast-ovarian syndrome. Ninety two percent were married and only 9% of them were nulliparous. Mean number of pregnancies was 4.3 and most had established lactation (Table 2). 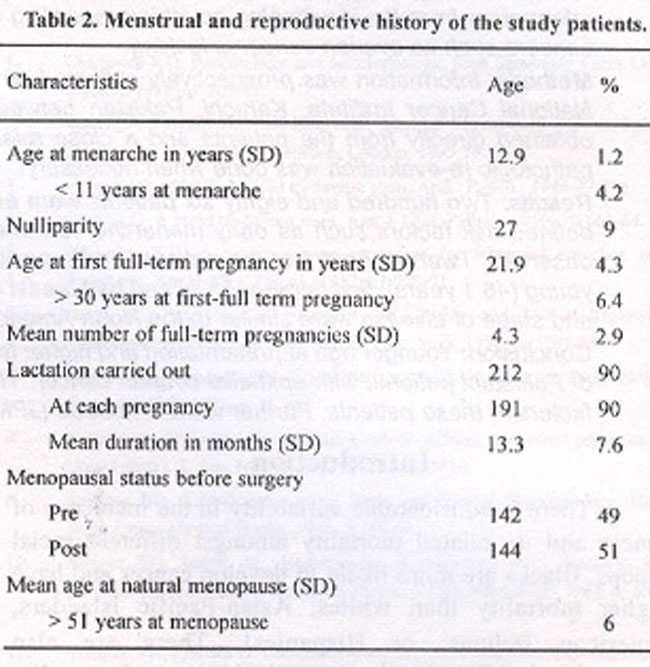 Clinical findings are provided in (Table 3). 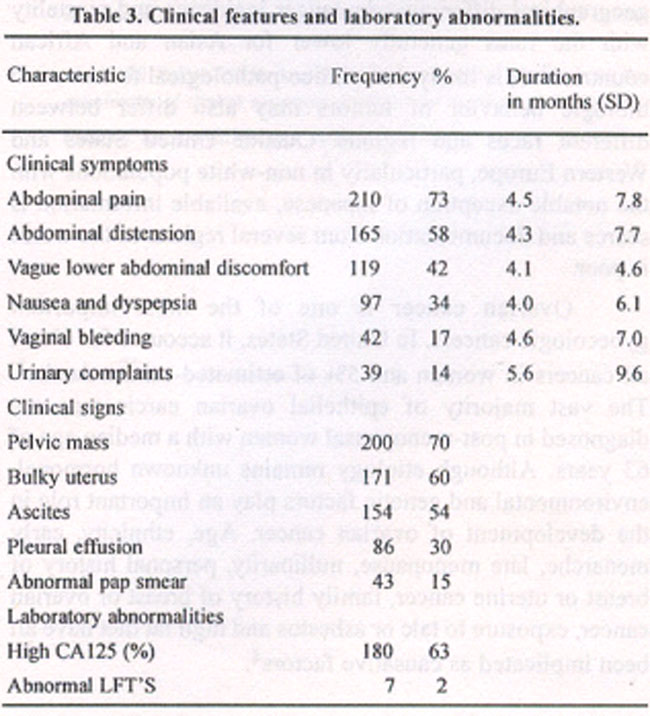 Sixty three percent had elevated CA 125 levels. The commonest histologic sub type was serous adenocarcinoma followed by the mucinous variety. Seventy eight percent of the patients had stage Ill or IV disease at the time of diagnosis (Table 4). 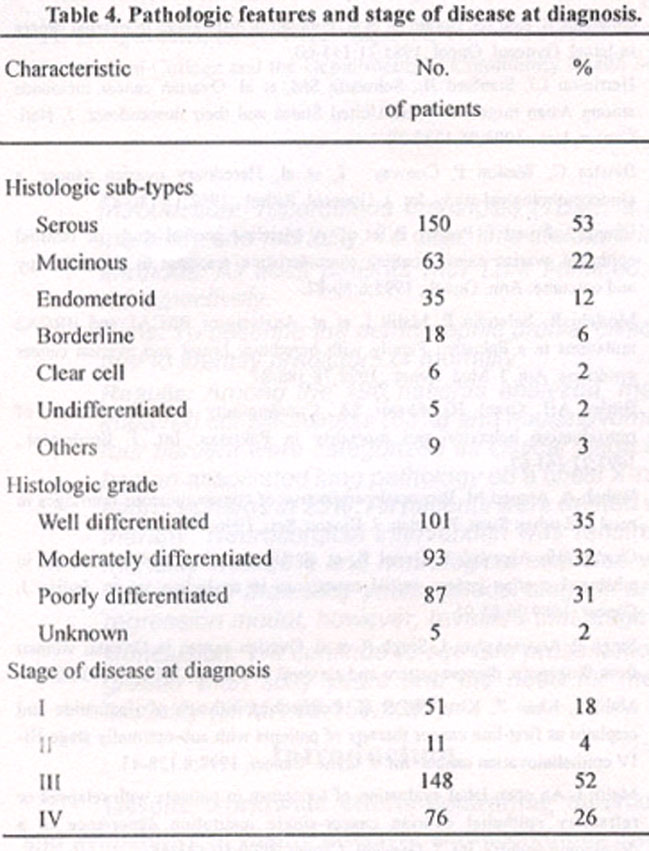 Unlike several other Asian countries, ovarian cancer is the most common cancer of gynecologic origin in Pakistani women2,5,6. This study is probably the first detailed account of clinico-pathologic features of these patients. Such information is rarely forthcoming from other developing countries making it difficult to compare the results. H ence, most of the comparisons have been made with the predominantly white North American patients.
Mean age (49.5 years) at diagnosis of Pakistani patients with epithelial ovarian cancer is similar to Japanese, Chinese, Indian and Israeli women of Afro-Asian origin7-10. This is substantially lower than Caucasian women in Europe or North America and Ashkenazi Jewish women in Israel. Reasons remain unknown, however, genetic as well as environmental factors may be operative11. National Cancer Institute is a relatively small non-profit organization. Because of its location and referral pattern, most of the patients belong to middle class. Indigent patients are often referred to other governmental institutions. Hence, our subjects may not be entirely representative of all patients diagnosed with epithelial ovarian cancer in Pakistan. The finding of higher socio­economic and educational status among patients in otherwise poor and illiterate population may be reflective of referral bias. However, it is interesting to note very low frequency of early menarche late menopause, nulliparity and advanced age at first childbirth. Parity was high and most patients had lactated. Oral contraceptives, however, were rarely used. Due to lack of control group, no definite conclusions can be drawn. A case-control study is required to address some of these issues.
Family history is the single most important risk factor for the development of ovarian cancer. Only a minority are defined as hereditary ovarian cancers (at least two first-degree relatives with ovarian cancer)12,13. Predisposition for the disease, in these cases, follows a classic pattern of autosornal dominant transmission with a high degree of penetrance. These patients are younger than the sporadic cases at the time of diagnosis. We identified 20% of our patients having positive family history. Sixty-eight percent of these relatives had a first-degree relationship with the patient and most of them had either breast or ovarian cancer. Five percent of the patients had history consistent with HOCS. This raises the likelihood of genetic factors playing a relatively more important role. Could this account for the younger age of our patients at diagnosis? We recently described a novel BRCA 1 mutation in one of these families14. Presently, we are collaborating with investigators at University of Toronto to study a large cohort of patients with epithelial ovarian cancer with the purpose of obtaining detailed family history and performing genetic analysis of the cases. Interestingly, family history of cancer was not a risk factor for ovarian cancer in Chinese and Indian patients8,9.
Consanguinity plays a role in the transmission of genetic disorders. Consanguineous marriages are common in Pakistan15,16. Thirty five percent of all patients in our series had consanguineous marriages. More research is needed to study the influence of consanguinity in Pakistani patients with epithelial ovarian cancer, particularly in those with positive family history.
Clinical presentation and laboratory features of our patients are quite characteristic of the disease. Similarly, no marked variation in histologic features or stage of the disease at presentation was observed.
Response to treatment and survival cannot be assessed from this study. No major differences, however, have been observed in Asian women with epithelial ovarian cancer17. Evaluation of response to initial cisplatin based and subsequent salvage chemotherapy indicates comparable rates of remission and survival18-20.
In conclusion, prospective analysis of Pakistani women with epithelial ovarian cancer suggests that clinico­pathological features, stage of disease and biologic behavior are similar to their Caucasian counterparts. Notable exceptions are ounger age at onset and increased frequency of patients with family history of cancer raising the possibility of a more significant role played by genetic factors in these patients. Further research is needed.