Objective:To test the hypothesis that women with multiple gestations are at increased risk of adverse maternal and perinatal outcomes when compared with singletons.
Design:From January 1999 to December 2000, all multiple pregnancies delivering >28 weeks gestation in the labour ward of Mother and Child Health (MCH) Centre, Pakistan Institute of Medical Sciences (PIMS), Islamabad, were taken as cases. Singleton pregnancy _28 weeks gestation period delivered immediately after each case was chosen as control. Prenatal complications, gestation at delivery, mode of delivery, birth weight and perinatal morbidity and mortality of the two groups were compared.
Results:There were 6831 deliveries including 120 twins and 2 triplets. The data of the two triplets are presented separately and further comparison is between 120 twins and singleton controls. Pretem labour was the commonest prenatal complication in twin pregnancies (21 vs 62) followed by anaemia (11 Vs 39). The mean gestational age of singletons was 38.3 weeks compared to 35.9 weeks for twins. The mean birth weight of singletons was 2.9kg vs 2.1kg for twins. Six (4.9%) singletons and 46 (19.2%) twins had caesarean section. Thirty one (13%) of the twins and 1(1.6%) singleton had vaginal breech delivery. Five (4%) singleton infants and 40(17%) twins required admission. Ten singletons and 26 twins died perinatally resulting in a PNMR/1 000 births of 82 and 108 respectively.
Conclusion:Women with multiple gestations are at a higher risk of antepartum and intrapartum complications and their infants require special care. There is need to identify these cases early in order to provide good prenatal care and deliver them in hospitals with facilities for neonatal and maternal intensive care (JPMA 52:143; 2002).

The incidence of multiple gestations varies in different parts of the world. In the developed countries it has increased during the past 20 years. This is mainly due to widespread availability of ovulation inducing agents, assisted reproduction techniques and delayed child bearing by women1. Traditionally, multiple gestations have been associatcd with increased incidence of adverse pregnancy outcomes including premature delivery, pre-eclarnpsia, respiratory distress syndrome and mal-presentations. Compared to singleton pregnancies, multiple gestations are said to be associated with higher perinatal as well as maternal morbidity and mortality2,3. There is notable dearth of reliable data regarding the incidence and outcome of multiple gestations in Pakistan. After extensive local and international literature search only three original4-6 and one review article7 were retrieved dealing with this problem in Pakistan. Thus to determine the prevalence of multiple gestations and compare the maternal and perinatal complications with singleton gestations, a prospective case controlled observational study was undertaken at MCH Centre PIMS. The acquisition of this data would also assist in counseling patients with multiple gestation of the outcome figures at this tertiary care centre.

From January 1999 to December 2000, records of obstetric care of all women with multiple pregnancies delivered at 28 weeks gestation or more (regardless of stillbirth or live birth) at MCH Centre, Pakistan Institute of Medical Sciences, Islamabad were collected prospectively. A Woman with singleton pregnancy at 28 weeks gestation or beyond, delivering immediately, subsequent to the multiple pregnancy case, was chosen as control.
All data starting from the first prenatal visit, details of any prenatal admission and intrapartum and postpartum details of the mother and infants, was collected on a specially designed Proforma for both, the cases and controls. Maternal age, height, weight, parity, gravidity, socio-economic status, past and family history of multiple pregnancy was noted.
Main outcome measures were, prenatal maternal complications (pregnancy induced hypertension, premature labour, anaemia, antepartum haemorrhage), gestation at delivery, mode of delivery, birth weight and perinatal morbidity and mortality. These were compared between the multiple pregnancy cases and singleton gestation.
Secondary outcome measures were incidence of assisted conception and postpartum haemorrhage in multiple versus singleton pregnancies. Anaemia was defined by WHO standards as haemoglobin level less than 11.0 g/dl. Data was entered on Microsoft Excel spreadsheet and analyzed on SPSS, Significant trend across the groups were determined using the Pearson X2 test. Independent Samples t test was undertaken, relative risk calculated with 95% confidence intervals, p value of <0.05 was considered statistically significant.

During the two-year study period from January 1999 to December 2000 there were 6831 deliveries of which 122 were multiple pregnancies. Among these there were 120 twins resulting in an incidence of I in 57 births. There were 2 sets of triplets resulting in an incidence of I in 3415 births. Apart from two women with twins who had taken clomiphene citrate the rest of the 242 women (cases as well as controls) had spontaneous conceptions. Women with multiple and singleton gestations were well matched for age, weight, height, parity, antenatal booking and socioeconomic status and there was only one statistically significant difference in the two groups as regards family history of twins (Table 1). 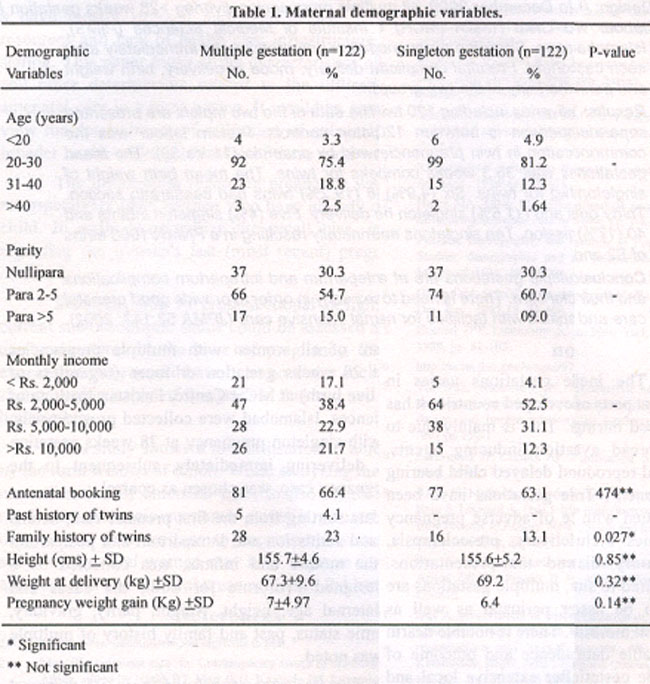 The details of the two women with triplets are shown separately (Table 2).

Further analysis of data is of 120 twins vs singletons excluding the two sets of triplets. Preterm labour was the commonest antenatal complication in twin pregnancies followed by anaemia, PIH and APH (Table 3). 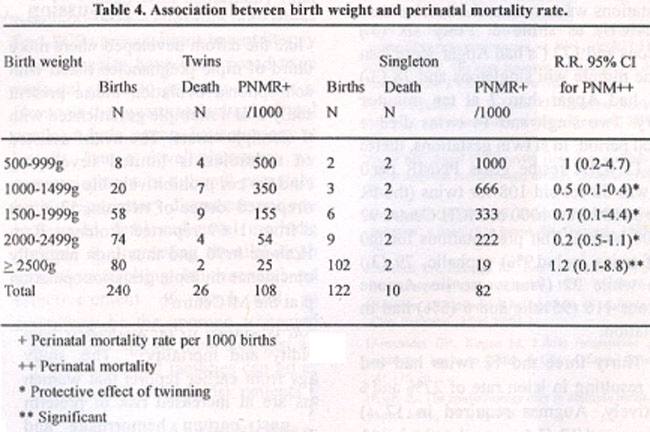 This shows that for each weight group the perinatal mortality rate (PNMR) of singletons is higher than for twins of similar weight5.
deliveries for singletons but there were only 2 singletons with breech presentation, one of whom was IUD. Thus this high PNMR is not statistically significant and cannot be generalized. Among the twins the highest perinatal mortality was noted in the spontaneous vaginal deliveries that included a higher proportion of infants with low and + Perinatal mortality rate per 1000 births  Not significant Five (4.1%) singleton infants and 40 (16.7%) infants of twin gestations were admitted to neonatal intensive care unit (NICU) as shown in Table 5.

Unlike the data from developed world8, where more than one third of multiple pregnancies are associated with assisted conception and ovulation induction, the present study has only 0.81% of multiple gestations associated with the use of clomiphene citrate. The availability of assisted conception technologies is limited in the developing countries and the cost is prohibitively high for the common man. Our reported incidence of twinning of I in 57 is not dissimilar from I in 69 reported from Sir Ganga Ram Hospital, Lahore in 1996 and thus indicates the naturally occurring incidence of multiple gestation in the population presenting at the MCH Centre9.
Multiple gestation is known to be associated with higher maternal morbidity and mortality10. This study corroborates the findings from earlier reports that women with multiple gestations are at increased risk of preterm labour, preeclampsia, post partum hemorrhage and anaemia11-13. The most likely reason of increased risk of preterm labour is uterine over distention while preeclampsia has been associated with a larger placenta in multiple gestation exposing the mother to more paternal antigen. The expanded maternal blood volume plus the increased demand of the fetus for folic acid and iron contribute to increased frequency of anaemia. Total weight gain and specifically early weight gain is higher than the mean value associated with singleton pregnancies although the differences in the present study did not approach statistical significance. In the USA the infant mortality rate for singletons, twins and triplets is 8.6, 56.6 and 166.7 respectively per 1000 live births14. These rates are much higher in the present study i.e., 82, 108, 500 respectively. In comparison to reported data from other tertiaiy hospitals in Pakistan the overall PNMR of twins was 227 at Services Hospital Lahore5 in 1995 and 195 for Ganga Ram Hospital Lahore6 in 1996. So even for the best of centres in Pakistan much still needs to be done by the obstetricians, neonatologists and the community to improve the perinatal outcome of multiple gestations. Preterm birth and low birthweight are more common in twins compared to singletons15. The neonatal mortality rates are much lower in twins compared to singletons in weight categories from 1250-2500g16 as in the present study. Twins possess an apparent positive predisposition to survival in face of delivery before 37 weeks although the risk of severe handicap awong the twin survivor is twice that of singletons.
Experiences from other developing countries like Cameroon17 and Jordan18 reveal that about two thirds of perinatal mortality in twins is due to prematurity. Moreover breech presentation was associated with abnormally high fetal mortality thereby leading to ever widening indications for LSCS in breech presentations in current literature. Many management strategies have been proposed to reduce the perinatal mortality due to prematurity in twin gestations. However none of the measures including bed rest, cervical cerciage and tocolytic agents have shown any significant benefit. In Pakistan, a developing country, poor socio­economic status, absent or suboptimal prenatal care, low birth weight and respiratory distress syndrome contribute to increased maternal, fetal and neonatal morbidity among multiple gestations. Increasing the availability of health education and counselling in the prenatal period and effective management of prenatal and peripartum complications may be the appropriate strategies. Trained senior obstetrician, neonatologist and anaesthetist working in well-equipped facilities can go a long way towards safe delivery in these high-risk patients.

We wish to thank Dr. Masood Ali Shaikh for his useful suggestions during the analysis phase of the study.
His invaluable input for the statistical analysis made the final results complete. We would also like to thank Dr Mahboob Agha for his kind advice and support during statistical analysis.
We acknowledge with thanks the resident staff at MCH Centre whose continued cooperation made this study possible.