Objective:Majority of the women in the developing countries are unable receive antenatal care for a variety of reasons. This study determines the factors affecting utilisation of antenatal care by women of a rural area in Sindh, Pakistan.
Methods:A cross-sectional study was conducted during August 1997, in Union Council Jhangara, Sindh, Pakistan. Married women, who had delivered at least one child, were included in the study from each household and systematically 222 eligible women were selected. The effects of demographic, socio-economic and environmental factors on the utilisation of antenatal care, by women during their most recent pregnancy were also studied. Multivariate logistic regression analysis was used to assess independent effect of individual factors.
Results: Among the study subjects, 29.3% (65) of the women utilised antenatal care during the last (most recent) pregnancy and out of them 72.3% (47) received it from the government health care provider. Presence of electricity in the house was strongly associated with the utilisation of antenatal care (AOR = 5.3; 95% Cl 2.2-12.7). Women whose husbands were in white-collar occupation, were utilizing the antenata! care significantly more (AOR = 2.4; 95% CI 1.2-4.6) compared to women whose husbands were in blue-collar occupations.
Conclusion:The study shows that social status and economic condition of a woman is an important determinant of utilisation of antenatal care. Therefore, improvement of socioeconomic status is required to increase utilization of antenatal and perinatal care (JPMA 52:138;2002).

The study was conducted in August 1997, in 40 kilometers radius of 1,300 households, in a rural area, within the Union Council Thangara of district Dadu in Sindh, Pakistan. Except for the two dense villages of Jhangara and Bajara the area is scarcely populated. A rural health center (RI-IC) situated in Jhangara serves the area.
While considering the variables of interest the study required a sample of 213 women of reproductive age, while taking the alpha risk of 5% and power of 80%, to measure an odds ratio of 2.5. Systematic sampling of the households was done in a cross-sectional survey and every fifth household was taken in the study. As no identification number assigned to the households and as these were haphazardly located, we randomly selected the initial household and left four households eastward to select the next one i.e. we counted the households in the direction of east, then north, then west and then south in a particular location and so on. Structured questionnaire was developed and administered to the study subjects. We interviewed the youngest married women, between the age of 15-49 years in each household who had delivered at least one child. A total of 222 eligible women were identified for the study.
Antenatal care was defined as at least one visit to a health care provider during the last pregnancy. Health care provider included doctor, midwife, lady health visitor, lady health worker and trained or traditional birth attendant. The dependent variable was categorized into women who utilised and who did not utilise antenatal care. Independent variables were: Demographic variables; woman’s age, woman’s education, husband’s education and ethnic origin. Any formal schooling was considered as literacy. Socio­ economic information was collected by measuring variables such as occupation of the husband, household income, household ownership, type of construction of the house, assets and presence of electricity in the house. We categorized the occupation of the husband into white-collar and blue-collar workers in order to make meaningful comparison. Landlords, teachers and government employees were considered as white-collar workers, whereas farmers, labors, fishermen, cattle herder and handicraft workers as blue-collar workers. Household was defined as people living together and sharing the same kitchen. Parents and their children were considered as a family unit. We categorized the household according to the family type: single family (nuclear family) and more than one family living in the same household (joint family). Construction of house was defined as: ‘Pucca’: houses which are made of concrete, plastered walls and roof, ‘Non-Pucca house’: part or whole of house was made of clay, wood and reeds. In order to assess the economic status of a household, inquiry regarding average income and assets of the households was made. Possession of assets by the household was assessed to estimate the actual economic status. To determine meaningful information, assets were logically categorized according to their usefulness and service. These were categorized as: (1) that belonged to provision of information, (2) of domestic utilities, (3) farm and transportation animals and (4) modem means of transportation. Availability of sanitary toilet facilities to the households was considered in the environmental factor.
Multivariate analysis was performed in order to select variables, which could predict the antenatal care seeking behavior of rural women. Variables with p-value ~0.25 in the univariate analysis, or which had a significant biological relevance, were then analyzed through multivariate analysis,5. The analysis was adjusted for maternal age due to its cultural significance on the health seeking behaviors13. The magnitude of effect of the independent variables associated with utilisation of antenatal care of women was assessed through adjusted odds ratios (AOR) and the significance of association was assessed through corresponding 95% CI. In all the analyses, alpha level of 5% was used. Epi-Info 6 statistical package was used for data entry or validation, and Statistical Package of Social Sciences (SPSS) version 10.0 was used for analysis. 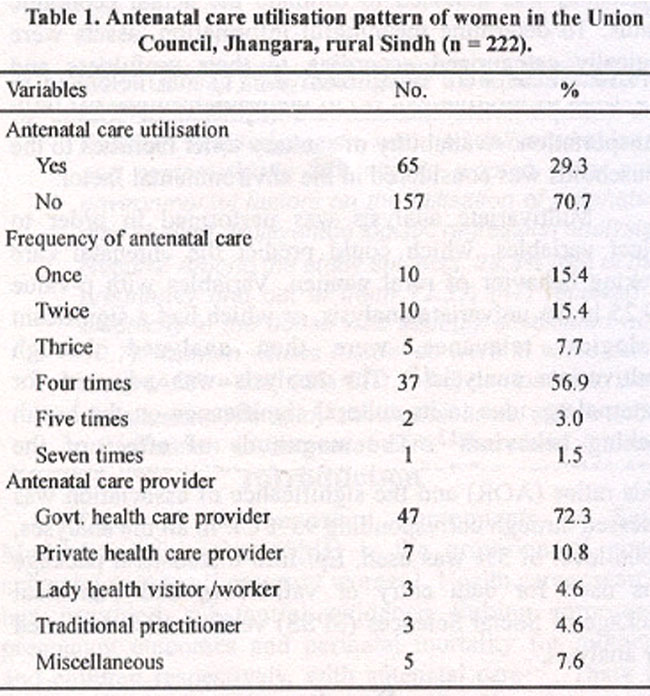 Miiltivariate logistic regression
Table 4 shows the maternal age adjusted results of logistic regression analyses. Women with husbands in white-collar jobs were more likely to go for antenatal care compared to those having husbands in blue-collar jos (AOR = 2.35, 95% CI 1.2-2.46). The availability of electricity in the household was strongly associated with the utilisation of antenatal care (AOR = 5.28, 95% CI 2.2-12.7). Although the result was marginally significant, women living in Pucca’ houses were almost two times more likely to utilise the antenatal care compared to those living in ‘Non-Pucca’ houses (Table 3). 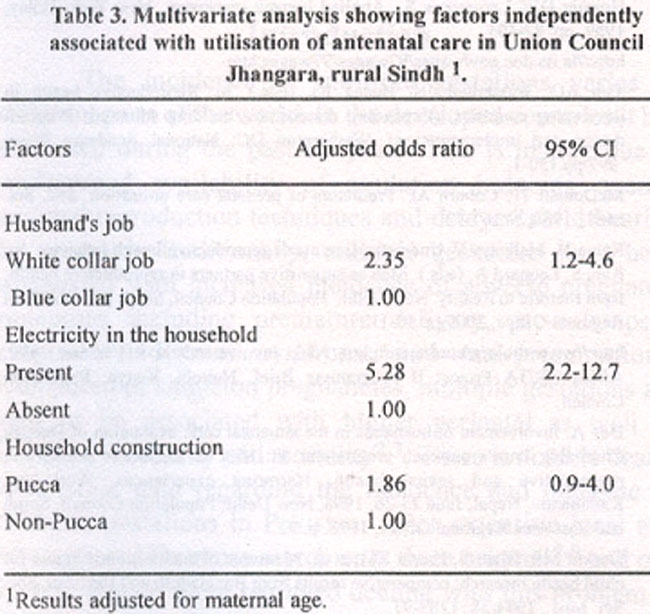 The survey shows that only 29% pregnant women of Thangara Union Council received antenatal care. This result is comparable with the data available for rest of country13. Incidenthy, findings of this study are similar to the national figures which show that 77% of antenatal care is provided by a doctor, 10% by a nurse, lady health visitor or family welfare worker and 13% by either a trained or traditional birth attendant13. It is important to note in the results that most of the women have received antenatal care from formal health care provider in the government sector (Table I), but traditional birth attendants attend most of the deliveries in Pakistan13. The proportion of utilisation of antenatal care studied is in the lowest limit range compared to average figures for antenatal care utilisation for the developing countries17.
The multivariate logistic regression results were adjusted for the maternal age, because socially it is a very important determinant of female health seeking behavior, especially in the cultural setting13. Studies have shown that women at younger age are less likely to receive antenatal care compared to elder ones13,18. Level of awareness of the women increases with increasing age. This increase in awareness may relate as well to increase contact with the health care provider, due to illness of the woman or her child18.
Nature of husband’s jobs determines the utilisation of antenatal care for a woman. The level of awareness and social class of the families in rural areas of Pakistan are closely related to husband’s job13. Studies have suggested that a husband’s literacy level may be associated with timely utilisation of health services19,20. A project of ‘Pati Sampark’ (PS), meaning ‘meeting husbands’, in Nandesari, Baroda, India, was designed to involve husbands in women’s checkups over a long period. It was observed that men from the PS group had greater in-depth understanding of antenatal care services and their respective effects on pregnancy outcomes. As a result, the PS women had greater number of antenatal visits21.
The socio-economic variables, such as household assets, which indicate the social status in a rural setting, require careful analysis and interpretation. The usefulness of these variables in the study is relatively more, compared to some of the earlier studies. For example, owning a modern transport vehicle such as a car or keeping a transport animal in the household, cannot become equal by simply multiplying it in monetary terms. Studies have employed these variables for counting the household assets and given their weightage in monetary terms13,22. Although, these variables are also counted in our study, they are dealt according to its utilisation and service.
Women living in houses with electricity utilised antenatal care more than those houses without electricity. Presence of electricity in a household in a rural setting is an indirect measure of accessibility to services and it is a sign of better social class. This may also mean availability of other media for the family. We also assessed the construction of the house as an economic indicator.
Although we did not find it significant, this variable was kept in the multivariate model for the reason of plausibility. We found that the quality of construction of the house as measured by construction material of the walls and roofs, was associated with the utilisation of antenatal care. This depicts that women who were better off, were utilizing the antenatal care more compared to those living in poorly constructed houses. Analysis was not performed on ownership of the house because almost all of the residents were owners of their house.
Studies have mostly stressed and looked at the resources and lack of health care infrastructure in a rural setting. This paper looks at the characteristics of a woman and other determinants related to the utilisation of the antenatal care in a rural setting. It would be appropriate to view the determinants of utilisation of antenatal care in a broader health-seeking behavior of these rural women.
The information regarding pregnancy was gathered retrospectively from women who have already delivered a child. In order to minimize the recall bias, information regarding the women’s last (most recent) pregnancy was obtained.
Secondly, due to cross-sectional design, only the current socioeconomic status could be assessed and not the economic status at the time of pregnancy. Though, we expect that there would have been no major socioeconomic change within a span of few years in that area and individual households.
This study shows a low utilisation of antenatal care by the rural women of Sindh. While analyzing the factors of non-utilisation of antenatal care, it also identifies that a rural woman’s socio-economic status is also an important determinant. Interventions to improve the socioeconomic status of the rural women may help improve the antenatal and perinatal care in rural areas of Sindh, Pakistan.