Surgical excision was once considered the mainstay of treatment for lymphangiomas. However, that paradigm is now changing with sclerotherapy emerging as a viable alternative. A 22 years old girl presented with a mucopurulent and painful discharge from an extensive wound in the trunk. Chest roentogram showed a large soft tissue abnormality with multiple calcifications in the right upper abdomen and lower thorax. Magnetic resonance imaging revealed an extensive lobulated mass measuring 27 x 19 cm. Due to the extensive involvement of tissues, surgical excision did not appear to be a favourable option in this case. Local injections of bleomycin were successfully administered; resulting in complete regression of the lesion. There has been no recurrence at 2 years of follow up. Use of bleomycin sclerotherapy appears to be a safe and effective management strategy and obviates the need for primary surgery especially in extensive lymphangiomas.

Lymphangiomas are benign and uncommon hamartomatous malformations of the lymphatic system that occur secondary to intrauterine obstruction or developmental arrest.1 Surgical excision was once considered the mainstay of treatment for lymphangiomas.2 However, sclerotherapy has now come to the forefront as a viable alternative. This technique obviates the need for primary surgery and is an effective, safe and minimally invasive option on its own with minimal complications.3
We describe here a case of a giant lymphangioma of the trunk that was successfully treated by intra-tumorous bleomycin injections leading to a complete resolution of the lesion.

A 22 years old girl presented to our hospital with a mucopurulent, bloody and painful discharge from an extensive wound in the trunk (Figure-1). 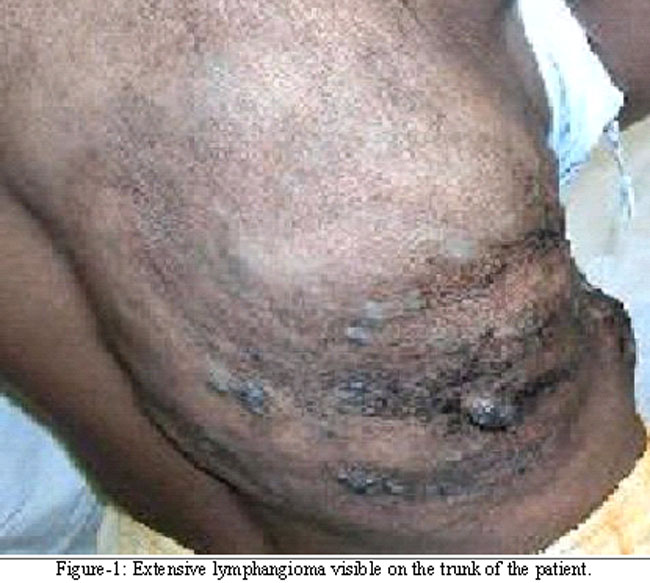 On further inquiry, it was revealed that she had visible dilated cutaneous vessels since the time of birth that had gradually increased in size with time. There was no fever or other relevant clinical findings. She had severe pain at the wound site and various analgesics had proven to be ineffective in controlling the pain. She was very hesitant in getting admitted or consulting any surgeon for this cosmetically debilitating problem; hence she presented late and her wound was already infected at the time of presentation. She was also very shy regarding discussion of her condition.
Chest roentogram showed a soft tissue abnormality with multiple calcifications in the right upper abdomen and lower thorax with a deformity of adjacent right-sided lower ribs. Magnetic resonance imaging (MRI) revealed a huge lobulated mass measuring 27 x 19 cm. It was wrapped around the right half of the trunk with a crescentric appearance on axial sections (Figure-2). 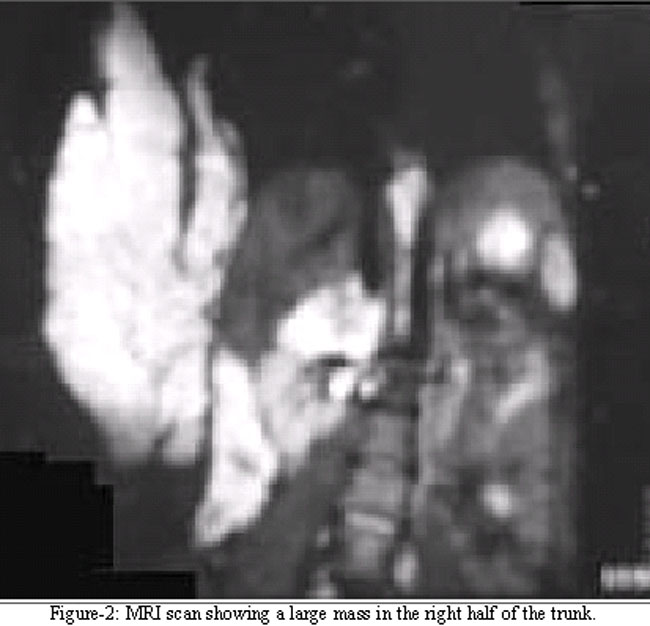 The soft tissues of the right chest and abdominal wall were replaced by the mass, which extended from the level of anterior aspect of the liver till the kidney. Sedimentation in the dependant portion of the mass was also seen. This appearance was most consistent with a diagnosis of extensive lymphangioma of the trunk.
Due to the extensive nature of the lesion, surgical management was not a favorable option for this patient. She was, therefore, treated with local injections of bleomycin emulsion in almond oil. The patient received bleomycin in a series of eight sessions, spaced at one month intervals. In each session, a total of 1 gram of bleomycin was injected into the four quadrants of the lesion. This treatment strategy proved highly successful as the lesion completely regressed. After the complete resolution of the lesion, the patient felt better from the psychological aspect as well and expressed greater confidence.

Lymphangiomas are benign lesions of vascular origin that can virtually involve any organ or tissue within the body. However, they have a predilection for sites in the head and neck region as well as the axilla.4 The diagnosis of lymphangiomas is much more common in children as compared to adults. As many as 90% of the tumours are diagnosed by 2 years.5 On ultrasound, lymphangiomas generally appear as anechoic cystic masses, but occasionally debris may result in echogenicity. CT and MRI scans may further aid in the identification of the lesion and its extensions. Lymphangiomas should be treated because of the potential for complications such as septic necrosis or haemorrhage. Other complications depend on the location of the mass. Abdominal lesions, for instance, can cause obstruction or peritonitis and manifest as acute abdomen.6 Mediastinal or cervical lesions can cause respiratory distress.7 Other reasons for treatment may include a cosmetic improvement.
Review of local literature didn\'t show any prior reports with the use of intra-tumour injections of bleomycin for the treatment of lymphangiomas. Available reports included cases of vulval lymphangioma and cavernous transverse mesocolon lymphangioma.8,9 Surgical resection was undertaken for the removal of the lesion.9
Lymphangiomas tend to extensively infiltrate the surrounding tissues. This characteristic makes surgical excision technically challenging. Radical extirpation may be undertaken to reduce the recurrence rate.2 However, such an approach poses risks of injury to surrounding structures such as nerves or vessels. In recent years, sclerotherapy has gained more popularity for treating lymphangiomas because of its safer profile. Two agents that are employed for the purpose of sclerotherapy are bleomycin and OK-432 (picibanil). Bleomycin therapy has not been associated with any major side effects so far. Vomiting and local reactions have been reported to be rare associations of bleomycin sclerotherapy.10
In a prospective study including 9 patients with lymphangiomas, ultrasonography was used to delineate the size, location, nature, and number of compartments of the cyst prior to the injection. Under ultrasound guidance, the content of the cystic cavity was aspirated and 1 - 3 mg/kg bleomycin was injected. In six patients, the mass disappeared completely after a single injection. In one patient a second injection was needed, and surgical excision had to be performed in the remaining two patients.3 This shows that ultrasonographic guidance can be used to inject bleomycin into the cystic lesion when technically difficulty is expected. We used bleomycin emulsified in almond oil, and ultrasonographic guidance was not used since the tumour was quite extensive and easily accessible.
Recurrence, however, can occur with either approach. This is because lymphangiomas can be difficult to completely resect surgically or with sclerotherapy especially if it is extensively involving the surrounding tissues. A study with the use of bleomycin sclerotherapy for the management of lymphangiomas has reported a recurrence rate of 10.3%.10 Despite the extensive involvement of lymphangioma in our patient, 100% regression was achieved and there has been no recurrence at 2 years follow-up.
Apart from bleomycin, other sclerosing agents have also been used to treat lymphangiomas. In a clinical trial on the treatment of lymphangiomas in the paediatric population, OK-432 (Picibanil) was found to be as effective as bleomycin.11 More studies are, however, needed to completely elucidate the sclerosing effect of bleomycin in comparison with other agents.

We have described a case of a giant lymphangioma of the trunk that was managed without surgical intervention. Bleomycin sclerotherapy appears to be a useful addition to the once limited armamentarium for the treatment of lymphangiomas. Our case showed a dramatic resolution of the large lesion following bleomycin injections.

Association of passive smoking with respiratory symptoms and clinical correlates, among married women, in a rural community in Islamabad

Microbes fight for survival, are we aware of the danger?

Extracorporeal photopheresis for graft versus host disease: A hope