Association of passive smoking with respiratory symptoms and clinical correlates, among married women, in a rural community in Islamabad

The hazards of passive smoking have been thoroughly researched and are well-known and proved.1-8 Association between involuntary inhalation of cigarette and increased number of various respiratory diseases, either in children or in adults, is now clearly established.8-11
Many publications indicate that respiratory consequences of passive smoking in humans may include non-malignant diseases in addition to lung cancer.12It has been observed that children exposed to second-hand cigarette smoke have more frequent attacks of asthma and other wheezing diseases.12-14 An influence of passive smoking on pulmonary function tests has also been widely examined and most specifically functional disorders of bronchioles have been detected. 15 Since adverse effects of passive smoking on human health, and quality of life, have been ascertained there is a need to promote awareness about the risks associated with passive smoking.1
Most of the research, regarding the effects of passive smoking, have been performed on children. A study carried out in Spain showed that children exposed to second hand smoke were more susceptible to developing respiratory diseases. Hence, it is clear that passive smoking in a domestic environment is harmful.2
Another study was conducted in the UK on the adverse effects of prenatal and/or postnatal passive exposure to smoking on children\'s health.13 They identified the uncertainties about the relative importance of smoking at different periods in the child\'s life. They investigated this in a pooled analysis, on 53,879 children from 12 cross-sectional studies - components of the PATY study (Pollution And The Young). There was strong evidence linking parental smoking to wheeze, asthma, bronchitis and nocturnal cough, with mean odds ratios all around 1.15, with independent effects of prenatal and postnatal exposures for most associations. Adverse effects of both pre- and postnatal parental smoking on children\'s respiratory health were confirmed. Asthma was most strongly associated with maternal smoking during pregnancy, but postnatal exposure showed independent associations with a range of other respiratory symptoms. The study concluded that all tobacco smoke exposure has serious consequences for children\'s respiratory health and needs to be reduced urgently.3
Other researches relating prevalence of respiratory diseases to those who smoked showed that smoking is related to increased incidence of COPD, asthma, bronchiectasis and pulmonary emboli.8 Passive smokers also show similar results.10,14
Research, carried out locally (in Pakistan), relating to passive smoking and its effects on the respiratory system have been non-existent. One study (a randomized controlled trial), carried out on the effects of passive smoking on the fertility of mice showed that passive smoking does indeed lead to decreased fertility in mice.16 Another survey, published locally, but carried out in Turkey showed that passive smoking leads to increased levels of Carbon Monoxide in the blood,17 but no local studies so far have been carried out linking passive smoking to respiratory problems or clinical correlates.
It is evident that a limited number of studies have been done to investigate the effects of passive smoking among married women, more so in the rural areas. We therefore carried out this study to further expand our knowledge by performing a cross-sectional comparative study. The objectives of our study were to describe the symptoms and clinical correlates associated with passive smoking among married women in Nurpur Shahaan (rural Islamabad), and to investigate the association of respiratory symptoms and clinical correlates in the same group.

This cross-sectional comparative study was conducted among married women at Nurpur Shahan (rural suburb of Islamabad), belonging to mainly to a low socioeconomic status. The study period extended between January and July 2009, with a sample size of 296.
The data collection tool was a questionnaire, and a group of 8 medical students of 4th year MBBS from Shifa College of Medicine who were trained to administer the questionnaire in a face-to-face interview in Urdu language specifically.
The sampling technique employed was systemic random sampling, where the 1st household and then every 3rd house in each street was addressed. The inclusion criteria was all married women above the age of 18, excluding only those women who smoked themselves. Sample size was calculated using W.H.O software. Based on literature review the expected frequency of respiratory symptoms was 50% among passive smoking women and 30% among non-passive smoking women. For 95% confidence interval and 90% power the sample size came to 124 in each group. For contingencies the sample size was inflated to 145 in each group.
The Independent variables employed were age and husband\'s smoking status, duration of marriage and the dependent variable was respiratory symptoms among wives.
All data was entered and analyzed using SPSS version 10.0. For continuous variables (age, pulse, blood pressure) Mean ± S.D. was presented. For categorical variables (gender, husband\'s smoking status, educational level, fuel used for cooking, ventilation, headache, cough, frequency of pain, shortness of breath, blood in sputum) frequency (percentage) was presented.
For comparison of women in relation to husband\'s smoking status (age, pulse, blood pressure), independent Sample t-test was used. For comparison of two proportions (symptoms and signs), chi-square test would be used. P value of < 0.05 was considered statistically significant.
Selective bias was taken care of by following systemic sampling technique. There was a possibility of confounding if there is history of allergic bronchitis and/or asthma. History for these factors was obtained and positive cases were excluded.
Ethical considerations that were followed were IRB/Ethics committee approval, informed written consent and confidentiality of data.

A total of 296 women were surveyed. The mean age of the women was in 33±11 years. The mean number of years their husband\'s had been smoking was 13±11 years. The number of cigarettes smoked per day by husbands was 8±8. There were a total of 150 women in the passive smoking group and 147 women in the non-passive smoking group. The baseline readings of the women were pulse 77±10 beats/min, with a blood pressure of 120±12mmHg systolic and 80±8mmHg diastolic.
The socio-demographic characteristics of the surveyed women showed that 147(49.3%) women and 88(29.4%) men (husbands) were un-educated (Table-1). One hundred and fifty (50.5%) husbands smoked, of which 67.6% smoked inside their houses, with the wives being present most of the time (62.7%). Majority of the women (75.1%) used wood as a cooking fuel, followed by natural gas (Table-1). 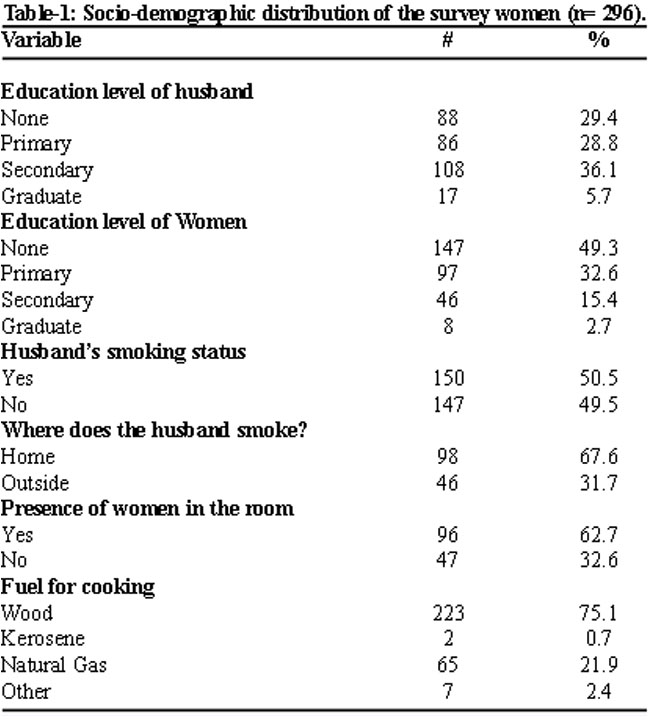 According to the results of the study, the two main symptoms that are associated with passive smoking in the housewives were cough (58% of passive smokers) and sinusitis (58% of passive smokers). The women who were affected were the ones whose husbands smoked inside the house, which were mostly not properly ventilated. Previous researches also demonstrate that passive smoking is strongly associated with respiratory symptoms.1-8
Previous research has shown an association between environmental tobacco smoke and otitis media.18 However, our research did not show any conclusive link between otitis media (10% of passive smokers as compared to 4% of non passive smokers) and secondhand smoke, as reported in two other studies.7,19 Shortness of breath was another symptom noted. Research shows a strong association of shortness of breath with active rather than passive smoking.18 This finding is in accordance with our study (46% of passive smokers as compared to 38%).
Passive smoking is known to be deleterious to human health, especially for the respiratory system.10 Therefore it is important to identify the association of these symptoms (headache, cough, phlegm and haemoptysis) and diseases (sinusitis, otitis media, cancers, infections, bronchitis and asthma) with second hand smoke.
The women affected were those whose husbands smoked inside the house, which were mostly poorly ventilated. The doors of the rooms were kept closed due to the cold weather, which further prevented the passage of fresh air inside the house and exacerbated the symptoms.11 Most of the women complained of cough which was moderate to severe in intensity.
The women also reported to have persistent rhinitis and frontal heaviness which indicated the presence of sinusitis, as reported in another study.9
The study, also suggested that headache might be the main symptom analysis of the data, did not support this funding. Headache was strongly associated with wood burning at home for the purpose of cooking, as reported in one study.11
Research has also shown that the smoke from burning fuel was the contributory factor for causing acute respiratory obstruction, COPD, asthma and lung cancer.5
The women experienced symptoms like cough, headache and sinusitis. Another study showed that women suffered from chronic cough when they were exposed to smoke from fuel.6,19 People exposed to smoke also had symptoms of dyspnoea and wheezing more frequently as compared to those who were not exposed.19
According to published research cooking fuel also contributes to high levels of SO2, NO2, and total suspended particulate matter (SPM) and due to this increase of the indoor pollutants it results in higher incidence of asthma, rhinitis and upper respiratory tract infections.18 High levels of oxides of nitrogen are the major contributors to these respiratory illnesses.18
There was another study that showed that fuel had no significant effect on women using it for cooking purposes rather it tends to affect men; more than those not previously exposed to smoke.7
The case of a 67 years old woman who suffered from cor pulmonale and other respiratory symptoms due to exposure to smoke, indicates that burning wood is responsible for such symptoms. This provides evidence that indoor air pollution is deleterious to respiratory function.20
The housewives in our study also showed significant correlation between passive smoking and increased pulse rate. This is further corroborated by a study, showing that when there was reduced exposure to second hand smoke, the prognostic heart rate improved.21
There were also changes in the systolic and diastolic blood pressures between the passive smokers and the non-passive smokers however they were not statistically significant. However, other researches show a definite association between passive smoking and blood pressure.22

The study concluded that, passive smoking was associated with respiratory symptoms and higher pulse rate in married women.

Microbes fight for survival, are we aware of the danger?

Extracorporeal photopheresis for graft versus host disease: A hope