The transradial approach as an access for percutaneous coronary intervention (PCI) has been widely adopted. However, anatomical variations and stenoses may pose significant challenges to the operator. We report a case of successful transradial PCI in a patient with a complete radioulnar loop.

The transradial approach (TRA) for percutaneous coronary procedures has the advantage of reduced access site complications but is associated with specific technical challenges in comparison with the transfemoral approach.1-4 Transradial procedure failures can sometimes be due to variation in radial artery anatomy.5,6

A 60 years old Hypertensive male presented in Emergency Room (ER) with acute anterior wall myocardial infarction. He was successfully thrombolysed at ER but his clinical course in Coronary Care Unit (CCU) was marked by frequent chest pains. Early coronary angiogram was planned. The radial artery was successfully accessed with 6F radial sheath. Multipurpose (MP) 5 French catheter was introduced through a 0.035" guide wire but the wire got stuck few centimeters post sheath. While retaining the catheter in situ the wire was removed and a retrograde contrast injection was given to visualize the obstruction. At first, it seemed to be a spasmatic brachial artery. However, with a careful look a regurgitant contrast was noticed into the "true brachial artery" (Figure-1A). 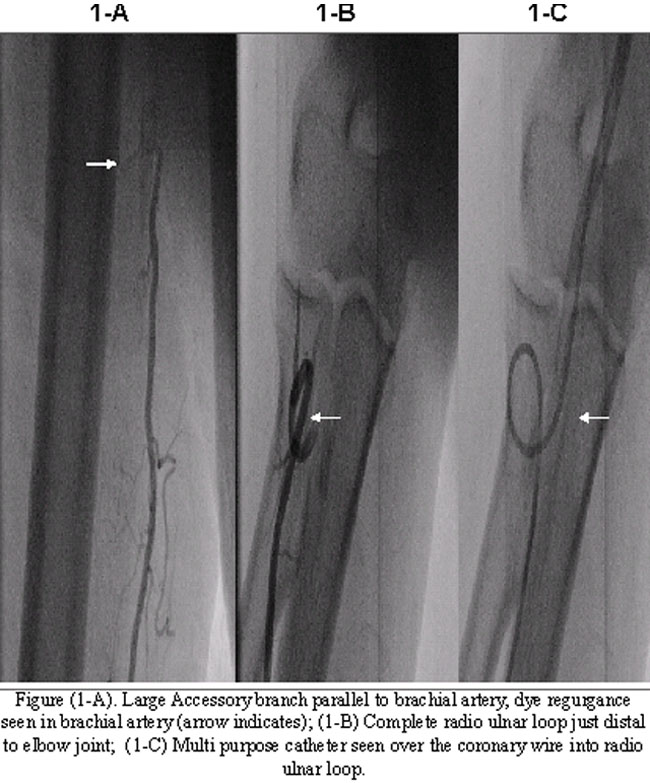 While dragging back the MP catheter another contrast injection was given that revealed a complete radio ulnar loop just distal to the elbow joint (Figure-1B). We tried to cross the loop with a glide wire but it kept going into the large anchoring branch parallel to the brachial artery. We took a 0.0014" coronary wire, crossed the radial loop and tracked into the main brachial artery. MP catheter was loaded over the coronary wire but failed to straighten the radial loop (Figure-1C). Coronary wire was removed and a regular 0.035" guide wire was introduced into the MP catheter. As soon as the guide wire crossed the loop, the radial loop straightened (Figure-2A). 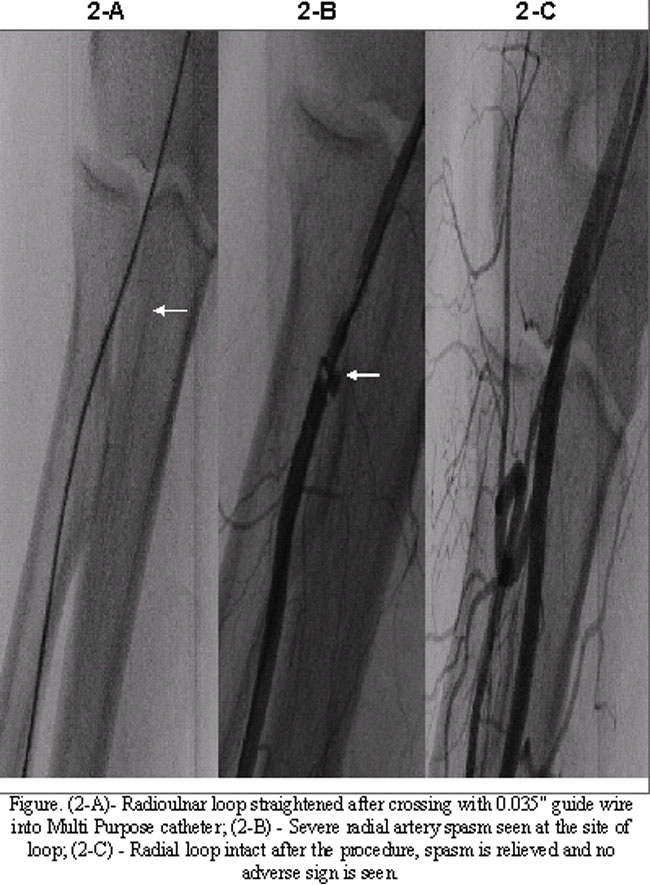 After this coronary angiogram was done in usual fashion with a 5 French terumo/tiger catheter. Angiogram revealed a critical lesion in mid left anterior descending artery that was successfully fixed by direct stenting followed by post dilation with non compliant balloon. During the procedure, the forearm was observed for any adverse effects and symptom. Patient had a bearable pain in the forearm due to spasm of the radial artery (Figure-2B). Three mg intravenous Nalbuphine and 300 microgram intra arterial glyceryl trinitrate was given that successfully relieved pain and spasm. After Per Cutaneous Intervention (PCI), sheath was removed and radial band applied. No adverse event was observed during CCU stay and the patient was discharged after 48 hours.

Anatomical variations are commonly encountered during transradial approach (TRA) for diagnostic and interventional procedures and may cause access failure.7 T S Lo et al8 recently studied 1,540 consecutive radial procedures and found radial artery anomaly in 13.8% patients while Valsecchi et al9 reported quite a high incidence i.e 22.8% in their study of 2,211 cases. T S Lo et8 al found full radial loop in 35 (2.3%) patients and Valsecchi9 in 18 (0.8%) patients. T S Lo and Valsecchi both reported radial loop as the commonest cause of procedure failure i.e. 37.1% and 16.7% respectively.8,9 Although, the overall success rate with radial artery anomalies is encouraging (96.8% by T S Lo and 97.5% by Valsecchi) but with radio-ulnar loop the data is disappointing.8,9 This shows that a real challenge exists in dealing with radial loop and it needs proper skill, technique and training to overcome this problem.
The complete loop of the radial artery encountered in our patient is the commonest cause of access failure. Sometimes the loops may be crossed and straightened using hydrophilic wires with eventually successful PCI.5 However, in our patient the guide wire was unable to cross through the loop due to multiple branching patterns along the loop. One of the branches was long enough and apparently mimicking the brachial artery due to its lengthy and parallel course along the brachial artery. Catheterization via this branch could have been harmful if we had not anticipated this anomalous branch with retrograde injection. TS Lo et al suggested routine imaging of radial artery after sheath insertion due to this type of relatively common anomalous radial artery anatomy.8
Tracking the artery with a coronary wire is not a cost effective method but in adhoc PCI cases it does not make a cost difference (as in our case) as the same coronary wire can be used during intervention. Tracking with a coronary wire is a much easier way in a patient with tortuous and multiple branching pattern of radial artery.
Although, one can cross the radial loop and can do angiography and intervention but due to that loop and spasmatic nature of the artery catheter manipulation is not easy and may be harmful if the operator is not careful. Therefore, preformed catheter should be used to minimize manipulation.

Anatomic variations of the radial artery are not uncommon and radioulnar loop is one of the commonest anomalies leading to access failure. However, it does not represent a definite contraindication to transradial approach. Technical difficulties can be overcome with proper training and skills and TRA can be safely performed in such patients.