Is it possible to reduce rates of placenta praevia?

Objective: To determine factors responsible for rising rates of placenta praevia.
Methods: This comparative study was performed at Jinnah Post Graduate Medical Centre Karachi, (Group-A) from September 2000 to February 2002 and (Group-B) from January 2008 to January 2009. All women with major degree of placenta praevia diagnosed on ultrasound who came in emergency or through out patient department were included in the study. Patients with mild degree of placenta praevia were excluded. Group A had 100 patients and Group B, 58 patients. Chi-Squire test was used for comparison of previous study and current study.
Results: The number of unbooked cases in both groups A and B was high (A=76%, B=62%). Most patients were grandmultipara (A=41%, B=34%) with ages ranging from 31-35 years (A=36%, B=43%). Even primigravida had a major degree of placenta praevia (A=17%, B=7%).
There was a significant difference in two groups in term of previous caesarean section (A=12%, B=38%). Association of placenta praevia following miscarriages was also noted (A=41%, B=29%). Placenta accrete were noted in two cases in group B, both required obstetrical hysterectomies. The results revealed a favourable foetal out come in both groups, A= 93 (93%), B=55 (95%).
Conclusion: With rising rate of previous caesarean sections over an eight year period from 12% to 38% the frequency of placenta praevia has increased. Most patients continue to present as unbooked cases in emergency, there fore the associated morbidity due to haemorrhage remains high. Therefore efforts should be made to avoid primary caesarean section where possible. In addition antenatal care and timely diagnosis of placenta praevia on ultrasound can decrease the associated morbidity (JPMA 60:566; 2010).

Haemorrhage whether antepartum, postpartum , due to abortion or ectopic pregnancy remains one of the major killers of child bearing women all over the world.1
According to the report of millennium Developmental Goals in Pakistan (Nov 2007) maternal mortality ratio per 100,000 live births is 320 and the target achievable ratio is 140 by 2015.2
Placenta praevia is a major cause of third trimester haemorrhage complicating between 0.3% and 0.5% of pregnancies and accounting for significant maternal and perinatal morbidity and mortality.3,4 It occurs in 2.8/1000 singleton pregnancies and 3.9/1000 twin pregnancies.5
Although the etiology of placenta praevia remains speculative, several risk factors associated with this condition have been established. These include advanced maternal age, multiparity, multiple gestations, previous abortion and placenta praevia in previous pregnancy.3 Myometrial damage due to caesarean section and dilatation and curettage are main predisposing factors.6
The traditional classification of placenta praevia describes the degree to which the placenta encroaches upon the cervix in labour and is divided into low lying, marginal, partial or complete placenta praevia.5 In recent years due to the increased prognostic value of Transvaginal ultrasound in diagnosis of placenta praevia this traditional classification is rendered obsolete.5 Diagnosis is made on history, clinical examination and few investigations which includes ultrasound (Transabdominal , Transvaginal) and Magnetic resonance imaging.7 Accuracy rate for transvaginal ultrasound is high (sensitivity 87.5% and specificity 98.8%). Sixty percent of placenta praevia diagnosed on transabdominal ultrasound have been reclassified on Transvaginal ultrasound due to poor visualization of posterior placenta, obesity and bladder filling.5
Caesarean section rates have continued to rise globally as well as nationally. Placenta praevia too is a recognized condition leading to maternal mortality and morbidity. Whereas there is evidence available to suggest the great occurrence of placenta praevia where the lower uterine segment is scarred, there is dearth of local literature to corroborate this.
This comparative study over two different time periods was done to look for factors responsible for rising rates of placenta praevia and consequent mortality and morbidity. This would enable the gynaecologists to recommend strategies reduce the incidence of this high risk cause of blood loss.

It was a case series enrolling two sets of patients in two different time periods at Department of Obstetrics and Gynaecology, Jinnah Postgraduate Medical Center. Non-probability sample technique was used. Study population comprised of 100 patients in group A (from September 2000 to February 2002) and 58 patients in group B (January 2008 to January 2009). All patients at 28 or more weeks booked or un-booked with or without caesarean section whether presented in emergency or outpatient department with painless vaginal bleeding due to placenta praevia type III-IV, diagnosed on ultrasound were included in the Study. Patients who presented with minor degree placenta praevia or abruptio placenta were excluded from the study.
A detailed history of these patients including age, parity, last menstrual period and expected date of confinement, history of abortion, with or without dilatation and curettage, history of caesarean section or myomectomy or history of placenta praevia in previous pregnancy was taken. History of bleeding including its mode of onset and association with pain was also asked. When available ultrasound findings at a specific gestational age were also considered. History was followed by general physical examination with special reference to vital signs and obstetrical examination. Relevant investigations including complete blood count and blood group and Rh factor were done. Ultrasound for foetal wellbeing, gestational age and placental localization was performed. Informed consent and counselling of spouses was accomplished. The timing and mode of delivery was determined in accordance with these.
Data feeding and statistical analysis was done on software SPSS version 10. The results are given in the text as number and percentages for qualitative data i.e. antenatal booking status, age and gestational age group, parity, associated risk factors, foetal outcome etc. Chi-square test was used to compare previous and the current study. In all the statistical analysis, p-value <0.05 was considered significant.

It was a comparative study which enrolled patients in two different time periods. Group A comprised of 100 patients, from-September 2000 to February 2002. These were compared with (58 patients Group B) from January 2008 to January 2009. The maternal risk factors and associated risk factors are shown in Table-1. 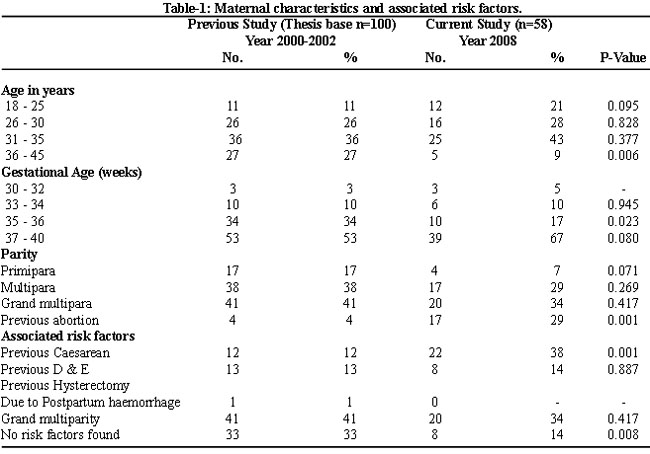 Millennium development Goal 5 aims to improve maternal health. It was translated into two targets: to reduce maternal mortality by three quarters between 1990-2005 and to achieve universal coverage of skilled care at births by 2015.8
According to report of millennium development Goals5 in Pakistan (2007), Pakistan has a 6th highest number of maternal deaths around 300-400 deaths per 100,000 births.2 Achieving millennium development Goal 5 requires reducing maternal mortality at a faster rate in the future than the reduction rate between 1990-2005. Over 80% of maternal deaths are due to direct causes. Haemorrhage is one of the major killers,9 not only in Pakistan, as its prevalence in Asian population is 0.64%.10 It is also associated with foetal morbidity and mortality. The study reveals that antepartum haemorrhage due to placenta praevia was more common in mothers who had no antenatal visits as compared to those who availed effective antenatal care and had prenatal diagnosis of placenta praevia (Group A= 76/100 and Group B=36/58) This is in contrast to a study carried out at Lahore General Hospital where antenatal booked patients were dominant.7 In Pakistan 50% of adult population is illiterate, and just over a third of adult females are literate compared to nearly two thirds of men.2 This shows lack of awareness of antenatal care due to illiteracy especially in Sindh which ranks second in literacy in Pakistan.2
Our study analysis of age and parity showed that the frequency of placenta praevia increased across the entire maternal age and multiparity which is consistent with studies done in other countries.11-14 Our results are comparable to a study conducted at Khyber teaching hospital, Peshawar where majority of the patients were 35 years of age.15,16 Grandmulitipara outnumber in our study which is comparable to a study carried out at Quaid-e-Azam Medical college, Bahawalpur which showed 68% patients to be Grandmulitipara.16 This is in contrast to other studies where majority of the patients were multipara.15,17 Primigravida also had a major degree of placenta praevia which is comparable to a study where 10% patients were primigravida.18
Obstetricians should be prepared to face placenta praevia/accrete which are the late consequences of caesarean section. Our study analysis,  comparing the risk of placenta praevia/accrete with unscarred uterus, showed an increased frequency in the scarred uterus, which is consistent with study by Sinha, et al.19 Another study has predicted that if primary and secondary caesarean rates continue to rise, by 2020, the caesarean delivery rate will be 46.2% and there will be an additional 3728 placenta praevia.20
In contrast to Group-A = 12/100, in Group-B = 22/58 of placenta praevia cases were associated with previous caesarean section. Our results are also comparable to a study carried out at Lahore General Hospital where increased frequency of placenta praevia was found following rising caesarean rates,7 signifying that rising caesarean rate has a dominant role in the etiopathogenesis of placenta praevia. This is comparable to other studies which have similar conclusions.7,15,19,20
Dilatation and curettage or vacuum aspiration may cause scarring and adhesion in the uterus that impedes proper placentation in subsequent pregnancies. In our study A and B analysis both indicates association of placenta praevia with previous abortion.
Favourable foetal out come was seen in both groups reflective of prompt appropriate management in this population of largely unbooked Emergency admissions.

This study concludes that efforts should be made to reduce the rates of operative deliveries, because there is a greater likelihood of placenta praevia in scarred uterus in a subsequent pregnancy.
The morbidity associated with Placenta praevia can be reduced by detecting the condition in the antenatal period by ultrasound before it becomes symptomatic. This calls for educating our patients and make them aware of the importance of antenatal care and making it available. Timely access to Comprehensive Emergency Obstetric care (Emoc) facilitation can in future reduce the associated morbidity and mortality. This can be achieved by allocation of appropriate resources and creating awareness about the importance of accessing skilled care during pregnancies and childbirth.