Perception of community regarding common diseases prevailing in the a squatter settlement of Karachi, Pakistan

Objective: To determine the perceptions of the community about prevalence of different diseases in Gulshan-e-Sikandarabad, an urban squatter settlement in Karachi and compare them with the data about disease pattern available at Primary Health Care Center in the same community.
Methods: A stratified random sample of ten percent of houses of the community was selected and both male and female heads of household were interviewed.
Open ended questionnaire was used to record perceptions of responders. A total of 336 persons were interviewed out of which 196 (58%) were females and 140 (42%) were males.
Results: Age, education, nationality and ethnicity (Sikandarabad has inhabitants from Afghanistan as well. In our study 12 were Afghan nationals. Among Pakistani responders majority were Pathans, some were Punjabi, Saraiki etc.) had no statistically significant difference in responses. Gender had the most significant difference in responses. The perceived nine top most common diseases were similar to the top nine common diseases according to data of the health center of Ziauddin University located in Gulshan-e-Sikandarabad.
Conclusion: The perceptions of community members about most of the common diseases prevalent in their community was similar to the disease pattern maintained at Primary Health Care center in the same locality. Anaemia and helminth infestation although common according to the health center record were not perceived as common by the community members (JPMA 60:562; 2010).

The study site was an urban squatter settlement in Keamari area of Karachi by the name of Gulshan-e-Sikandarabad. This settlement is established on land re-claimed from seas by filling of shore with soil. Therefore it is an unplanned community without proper sewerage and water supply system. The area is divided into five blocks and total population of the area at the survey was 34000. Most of people are migrants from other parts of the country and also from Afghanistan and belong to low socioeconomic class.
There is no Government health facility in the area. Four private dispensaries run by quacks are present which open in the evening. Ziauddin University with its allied tertiary care hospital is situated in close proximity to this community. It has been providing primary health care to the people of Gulshan-e-Sikandarabad since 1997 through its Primary Health Care (PHC) center located within the community. This center also maintains a record of all the patients utilizing the health center and codes the diseases using International Classification of Disease (ICD) 10 coding system. In this study the data about disease pattern maintained at the center has been compared to the perceptions of community people about prevalence of different diseases.
The study protocol was developed in the department of Family Medicine of Ziauddin University Karachi. A questionnaire was developed in Urdu and was pilot tested in a community adjacent to Gulshan-e-Sikandarabad. This community resembles Gulshan-e-Sikandarabad in demographics and socioeconomics but is geographically separated from Gulshan-e-Sikandarabad by a railway tract. The study was conducted from the Primary Health Care center situated in block 4 of the area.
This was a cross sectional survey conducted in July and August 2004.
Two staged stratified random sampling was done. In the first step all the houses of the area were divided into groups of 100 starting from first house. The existing data from mapping of the area available at Ziauddin University was used. This was done to get a representative sample of the area. In the second step ten houses were randomly selected from each of group of 100 houses so that 10% of the houses were selected.
The four doctors of Department of Family Medicine facilitated this study. Four females and two males who were all matriculates were enrolled for data collection. They received training of interviewing and collecting data at the department of family Medicine from principal investigator. All of the interviewers were well versed both in Urdu and Pashto. The female interviewers collected data in the morning time while male interviewers collected data in the evening when the males returned from their work. Interviews were conducted in mother tongue and Urdu was used when the mother tongue was not known by the interviewers. Open ended questions were asked and responses were recorded as such in the questionnaires to include all possible responses. The responses to open ended questions were grouped together after scrutinizing all options.
The heads of sample households were interviewed. In case the head of household was not available, then the next elder person was interviewed. If the responders refused the interview or the house was closed, then the next door neighbour on the right side was interviewed as a replacement sample. If the right side neighbour was not available, then left side neighbor was interviewed.
All the responses of open ended questions were coded and similar responses were grouped together. The data was entered using SPSS version 12 and was analyzed with frequency and cross tabulations. Chi square was used as test of significance with level of significance at p value of 0.05. 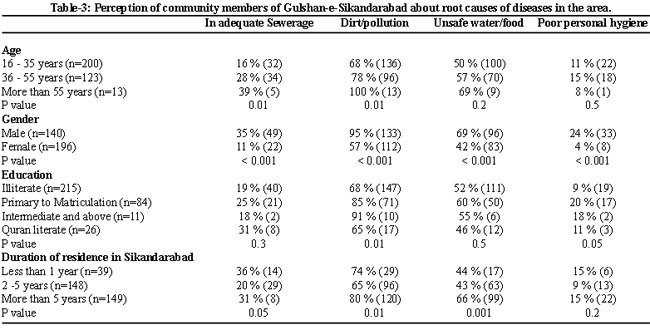 Persons above the age of 55 years were more aware about the in appropriate sewerage (39%), pollution (100 %) and unsafe food and water (69%) as causes of diseases but least aware of lack of personal hygiene (8%) as a cause. Men had significantly higher awareness about all the mentioned root causes of diseases in the community than women. Literate people had greater awareness about pollution, lack of personal hygiene and unsafe water and food as cause of diseases while Quran literate people perceived inappropriate sewerage as the common cause of disease in the area.

Prevalence of any disease in the community is best determined by reporting of total number of diseased individuals at any point in time. This prevalence may or may not be similar to the perception of the community members about the disease. People\'s perceptions are more important for their participation in any health programme. Community members participate actively in programmes which address diseases which they perceive as more common in their community. This study gathered the list of diseases which the community of Gulshan-e-Sikandarabad perceived as common. More importantly their perceived prevalence was compared to the disease pattern as monitored at the primary health care center in Gulshan-e-Sikandarabad. This comparison brought up three groups of diseases; diseases which were similar in both lists, diseases more common according to data but not perceived as common by community and thirdly diseases perceived a common but not common according to data at the center.
The perceived nine top most common diseases were among the top twelve common diseases according to data of the health center. The perceptions of community members can give an approximate idea about the true prevalence of diseases in the community if proper prevalence studies are not available or feasible. Perception studies have been used to estimate prevalence of diseases as a cost-effective epidemiological method.4
People perceived fever as the second most common disease which is actually a symptom of many infectious and inflammatory conditions. This implies that a symptom may be very important for the people and how important it is for health programmes to address this symptom.5 Some diseases which were frequently seen in the health center like urinary tract conditions, helminth infestations and anemia were not perceived as common by community members. Urinary conditions and helminth infestation might possibly have cultural or social sensitivity as most of responders belonged to conservative Pashtoon background. Such possibly sensitive conditions might not come out in such open ended questionnaires and might need to be asked specifically during surveys. Focussed group interviews are better options for such sensitive questions.6 Anemia usually presents with non-specific symptoms, has an insidious course and is usually diagnosed by physicians by its clinical signs. Therefore it might not be an alarming condition for the people even if it is common in community. This might be the reason why people did not perceive anemia as a common condition. This might be generalized to other insidious diseases like helminth infestation and nutritional deficiencies.7
In this study age, educational status, nationality and ethnicity had no statistically significant difference in responses. Gender had the most significant difference in responses. Males gave higher number of responses about most diseases but only women mentioned some important diseases like malaria and hepatitis. Hepatitis specifically hepatitis C is among the top ten diseases seen at the primary health care center of Gulshan-e-Sikandarabad.8 Our study confirms that men and women can have different perceptions and therefore a balanced sample of male and female subjects should be included in such perception related studies.9 The difference between responses of housewives from others could be because of female gender.

The perceptions of community members about common diseases prevalent in their community was similar to the disease pattern maintained at Primary Health Care center in the same locality. Disease with non specific symptoms and insidious course like anaemia and helminth infestation are not perceived as common by community people. Males have greater awareness about diseases as compared to females.

The authors are grateful to Dr. Amir Omair, Associate Professor, Department of Community Medicine, FMH College of Medicine and Dentistry, Lahore for review of the manuscript. We are also thankful to Dr. Saif Ullah Bhatti and Abdul Rehan for entering and verifying data.