Objective: To identify the reasons and adverse outcomes of home deliveries in women presenting to a tertiary care hospital.
Methods: A prospective, descriptive study was undertaken in the Department of Obstetrics and Gynaecology, Unit III, Civil Hospital Karachi from 1st April, 2007 to 31st August, 2007. All patients who were admitted with any complication of home delivery during this period were included in the study. Patients and/or their attendants were interviewed to collect data regarding age, parity, sociodemographic characteristics, reasons for home delivery, presenting complaints and complications of home delivery. The data was recorded on structured questionnaires, analyzed by SPSS version 16 and presented as frequencies and percentages.
Results: The mean age of patients was 26±5.3 years and the median parity was 2. The majority of the patients were Urdu-speaking (57.5%) followed by Sindhi (20.3%) and Balochi-speaking (11.9%). Eighty-seven percent of women had received either no or just primary education. The two most frequent reasons quoted for home deliveries were family tradition in 190 (72.8%) and lack of affordability in 179 women (68.6%). Postpartum haemorrhage was the main adverse outcome in 132 women (50.6%) followed by retained placenta/placental pieces in 74 women (28.4%).
Conclusion: The main reasons for having a home delivery are family tradition and poor socioeconomic condition of the family and the most important adverse outcomes of home delivery are postpartum haemorrhage and retained placental tissue (JPMA 60:555; 2010).

Home deliveries by traditional birth attendants (TBAs/dais) are a cultural norm in Pakistan. This is true both for rural areas as well as the urban slums. It\'s a common traditional belief that childbirth is a natural process which does not require any medical attention and should be conducted at home by the family \'dai\' who is a well-known and trusted figure for the family, is easily available and is not very expensive.1 This attitude coupled with poverty, illiteracy and ignorance regarding complications of delivery, is responsible for the majority of women preferring to deliver at home in Pakistan.
Worldwide, an estimated 529,000 maternal deaths occur every year, almost all of them in developing countries.2 There is an inverse relationship between the proportion of deliveries assisted by a skilled attendant and the maternal mortality ratio in these countries.2 According to WHO, immediate and effective professional care at the time of delivery can make the difference between life and death for both women and their newborns.3 Furthermore, this care should be available close to where people live, but at the same time safe, with a skilled professional, able to act immediately when unpredictable complications occur.3 TBAs (whether trained or not) have not been included among the skilled birth attendants by the WHO since their training has not shown any reduction in maternal mortality.4 However, it has been suggested that TBAs could perform the role of the skilled attendant, where required, with some training as they may be the only source of care for some women. In addition they may also serve to provide emotional support and health education to pregnant women at the local level.4
According to the latest Pakistan Demographic and Health Survey (PDHS) 2007, the maternal mortality ratio of Pakistan is 276/100,000 live births and the three major killers are post partum haemorrhage, puerperal sepsis and eclampsia.5 This survey, the largest household survey ever conducted in Pakistan, also showed that 65 % of deliveries are conducted at home.5 Traditional birth attendants assisted almost 79% of home deliveries followed by relatives or friends in 11%.5 According to this survey, the most frequent reason (stated by 57% of women) for not delivering in a facility, was the belief that it was not necessary. The next most common reason (stated by 38% of women) was that it costs too much.5 The fact that nearly 80% of home deliveries are conducted by TBAs, may be responsible for an increased risk of maternal and perinatal mortality as the TBAs are illiterate and not trained in preventing or recognizing complications and for promptly referring the patient to an appropriate facility for emergency obstetric care. Our study is the first hospital-based study to identify the reasons for women preferring to deliver at home and measure the adverse outcomes of home deliveries.

A prospective, cross-sectional, descriptive study was undertaken in the Department of Obstetrics and Gynaecology, Unit III, Civil Hospital Karachi from April 1 to August 31, 2007. All women admitted in the ward, either through emergency or out-patient department, with a history of home delivery, followed by some complication were included in the study. Patients who were referred from private or public hospitals after initially having a home delivery were excluded. An interview-based questionnaire was used to collect information from the woman or her relatives, regarding age, parity, ethnicity, educational level and reasons and adverse outcomes of home delivery after taking an informed verbal consent. History of antenatal care was also obtained and was qualitatively classified into: 1. Yes / Regular (with a history of at least three antenatal visits to qualified medical personnel), 2. Yes / Irregular (with a history of 1-2 antenatal visits to qualified medical personnel), and 3. No (with a history of no antenatal visits to qualified medical personnel).
Statistical Analysis: The data was entered and analyzed by the computer software SPSS version 16 and is presented in the form of frequencies and percentages.

The total number of women admitted with complications of home delivery during the study period was 261. 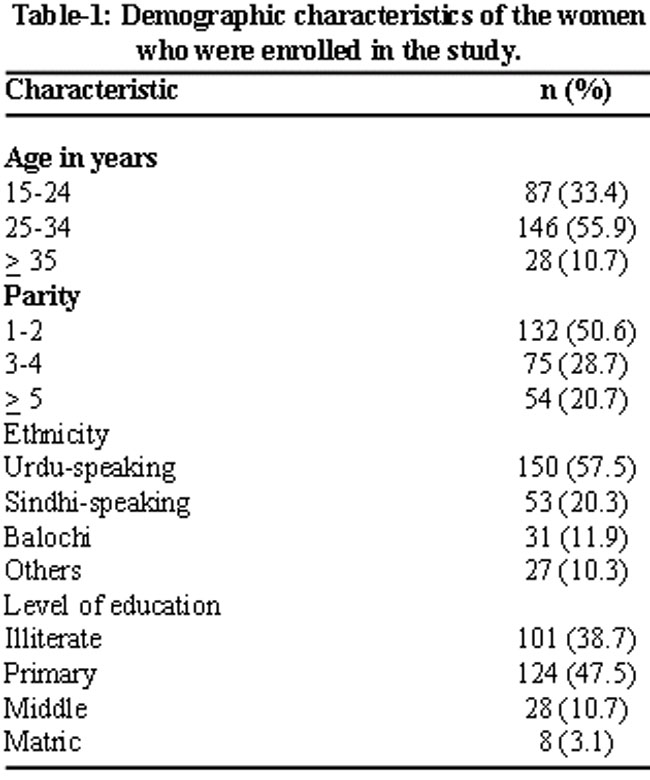 Table-2 shows the reasons for preferring to deliver at home as stated by the patients or their attendants. The most frequent reason was family tradition in 73% (190/261) women followed by lack of affordability in 69% (179/261) women. Many patients quoted both the reasons for home delivery. 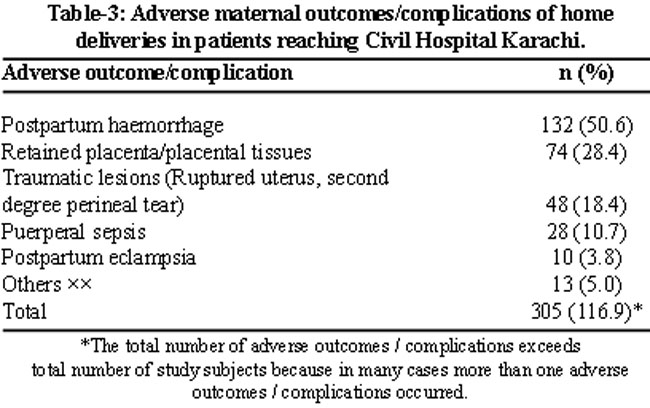 Table-3 shows the adverse maternal outcomes / complications of home deliveries. Postpartum haemorrhage (PPH) was found to be the most frequent complication in 48% (126/261) followed by retained placenta/ placental tissues in 26% of women (68/261). Postpartum haemorrhage was primary in 61.2% (77/126) and secondary in 38.8% (49/126) patients. Three women died, giving a frequency of maternal death of 1.1%. All three maternal deaths occurred within a few hours of admission and all three died of puerperal sepsis. The mean hospital stay was 3.8±2.1 days (range:  1-13 days).

Our study showed a very high frequency of maternal deaths among patients who delivered at home (3/261, 1.1%). This could be explained by the fact that all these deliveries were conducted by untrained birth attendants (either TBAs or untrained midwives). On the other hand, planned home deliveries in the developed countries have not been shown to be associated with an increased risk of maternal mortality, mainly because these are assisted by trained midwives.5,6 All three maternal deaths were due to puerperal sepsis and this may have been because of the usual practice of untrained TBAs of doing vaginal examinations and delivering the baby with bare and unclean  hands. A study on training of TBAs has shown that TBAs who received training were significantly more likely to practice hygienic delivery than if they received no training (45.0 vs. 19.3%).7
A study from a rural area of District Hyderabad, Pakistan, which showed majority of deliveries occurring in the homes (67%), reported the rate of obstetric complications as 38%.7
As far as the reasons for choosing to deliver at home are concerned, we need to analyze this phenomenon from two perspectives; reasons stated by the patients/attendants themselves and the objective assessment of the demographic and other factors. Subjective statements of the patients and their attendants pointed to two main factors; family tradition and lack of affordability, while analysis of sociodemographic factors revealed that 83.3% of women were either illiterate or had primary schooling only and 93.4% of women had received either no or inadequate antenatal care. Studies from Sri Lanka and Bangladesh have also reported poor maternal education and lack of antenatal care to be important risk factors for home delivery.8,9 Lack of affordability, illiteracy and improper antenatal care can all be attributed to poor socioeconomic status. Studies from Nepal and Nigeria have also shown a significant relationship between the socioeconomic condition of a family and the place of delivery.10,11
An important observation of our study was that women who were 35 years old or above, did not receive any kind of antenatal care. Similarly 91% of grand multiparous women did not receive any antenatal care during their entire pregnancy. Other studies have also reported that older mothers and grand multiparous women are less likely to utilize antenatal care services.12,13
Postpartum haemorrhage and retained placenta were the commonest complications of home delivery in our study. Similar third stage complications have also been reported by other studies from Nepal and India.14,15 A study from Civil Hospital, Quetta, Pakistan also reported that most of the women who developed PPH had been delivered at home (54%) followed by those who delivered at private clinics or maternity homes (26%).16 There is some evidence that TBAs can be trained to prevent, recognize and manage PPH and thus reduce mortality due to PPH in home births.17 A simple intervention which can prevent PPH and reduce the amount of blood loss at delivery is oral misoprostol which has been found to be safe, low cost, stable at room temperature and easy to administer thus making it a feasible option for use by paramedical workers conducting home deliveries in low-income settings.18-20
The strength of the current study is that this is the first hospital-based study in Pakistan which has documented the reasons why patients and their families choose to deliver at home instead of attending maternity homes or hospitals. Furthermore, this study has also measured the burden of adverse outcomes/complications of home deliveries. This preliminary study should pave the way for more extensive studies in this area. Work in this area will also help to provide feedback to the health care authorities, so as to draw their attention for better planning of the reproductive health of women. There are some important limitations of our study too. For example, the sample size was small and there was no control group of women who had had home deliveries without any complications.

Home delivery is associated with a very high risk of maternal mortality. Family tradition and poor socioeconomic condition of the family appear to be the main reasons for choosing to deliver at home. It is recommended that in order to make home deliveries safer, they should be conducted by trained midwives, who can conduct delivery in a clean and hygienic manner, prevent and recognize PPH and can refer the patient promptly to a hospital with emergency obstetric care facilities, in case of complications.

We acknowledge the kind support of Mr Syed Iqbal Azam from the Department of Community Health Sciences, Aga Khan University for statistical analysis of the study.