Objective: To assess the predictive ability of leukocyte subtypes for mortality in patients with acute coronary syndrome (ACS).
Methods: One hundred and thirty three consecutive patients of ACS were assessed in the study and were followed up for one year. Diagnosis was based on clinical characteristics and the laboratory data. The total leukocytes and its subtypes were counted by Sysmex automated cell counter. The predictive ability for death of total count of leukocytes, neutrophils, lymphocytes and monocytes was assessed using Cox regression analysis.
Results: Univariate analysis revealed higher prevalence of total leukocytes (HR= 1.001, p=<0.001) and its subtypes, neutrophils (HR 1.001, p=<0.001) and monocytes (HR 1.006, p= <0.001), in patients of ACS. In multivariate modeling, after entering standard coronary risk factors, count of total and differential leukocytes-neutrophils, lymphocytes, monocytes and cardiac biomarkers CK-MB, Trop I; the monocyte count (hazard ratio [HR] 1.004, CI 1.002-1.006, p<0.0001) was found to be independent predictor for ACS. A significance correlation between monocyte count and CK-MB, representing extent of myocardial damage, was also seen (r=0.301, p<0.0001).
Conclusion: The increase in monocyte count is an independent predictor of death and prognostic marker of the extent of myocardial damage in patients with ACS (JPMA 60:548; 2010).

Inflammation, dyslipidaemia, hyperglycaemia, hypertension, endothelial lesions, smoking, genetic predisposition and activation of immune system cells play an important role in the pathogenesis of atherosclerosis (AS).1 Various inflammatory markers are suggestive of coronary artery disease (CAD) and have been proposed for evaluation of cardiovascular risk. These inflammatory markers include C-reactive protein (CRP), tumour necrosing factor-alpha (TNF-a), fibrinogen, homocysteine and white blood cells count (WBCs).2
White blood cells help to assess the adaptive, maladaptive, acute and chronic inflammatory status while elevated WBC count is associated with high short term and long term mortality, more serious AS, and a lower response to fibrinolytic treatment in patients with acute coronary syndrome (ACS).3 Recent data has also revealed that some specific subtypes of leukocytes have higher predictive value in assessing the cardiovascular risk.4 Various studies have shown that neutrophils are involved in adaptive infarct healing, leukocyte-platelet aggregate formation and a cause of reperfusion injury in acute coronary syndromes. On the other hand monocytes and lymphocytes are considered to be prevalent and pathogenic in unstable coronary artery plaques.1
This study was designed to evaluate the predictive value of WBC and its elements in patients of ACS in local Pakistani population where lack of resources keep the access of so many to the best available diagnostic methods. WBC elements may become an additional parameter for the preliminary approach of patients with ACS.
This study was approved by institutional review board and ethics committee on human research.

Sixty nine healthy subjects and 133 patients of ACS were included in the study by using convenience sampling technique. All patients were evaluated by taking detailed history and physical examination. The variables included in the study were age, sex, diabetes mellitus (DM), systolic and diastolic hypertension, hyperlipidaemia, smoking, family history of ischaemic heart disease (IHD), cardiac biomarkers (Troponin I, CK-MB), C-reactive protein (CRP), and the total and differential leukocyte counts.
The inclusion criteria for the patients of ACS were those of American College of Cardiology and European Society of Cardiology.5
The criteria for STEMI were as follows: an increase in the levels of myocardial necrosis (troponin I >1 ng/ml); new ST elevation from the J point in two or more contiguous leads with an elevation of at least 0.2 mV in leads V1, V2 and V3 or at least 0.1 mV in the remaining leads during the first 24 hours following the onset of the symptoms. Patients were also included if a new ST-segment elevation in the presenting electrocardiogram was associated with a recent episode of chest pain but in whom it was not possible to obtain analysis of myocardial necrosis.
The criteria for definition of NSTEMI were: increased levels of markers of myocardial necrosis (as for STEMI) along with the presence of either symptoms of ischaemia or alterations of the ST-segment (except persistent ST-segment) elevation.
Criteria for UA were; typical chest pain and ECG modifications, such as ST depression or T wave inversion in > 2 leads, absence of new or presumed new echocardiographic alterations and cardiac wall motion abnormalities.
Patients with history of infection or systemic inflammation during the last 15 days, or with hepatic, renal or haematologic disease at admission, or on immunosuppressive drugs and those who did not sign the informed consent proforma were excluded from the study.
Venous blood under aseptic conditions was withdrawn from all the patients at time of admission and was analyzed for CK-MB, Trop I and total and differential leukocyte count. The CK-MB and Trop I were determined by Microparticle Enzyme Immuno Assay (MEIA) based on \'sandwitch\' principle using AxSYM system from Abbott Laboratories USA. Total and differential leukocytes were counted by automated cell counter Sysmex SE9000, Sysmex Corporation, Kobe, Japan.
Follow up was done for a period of one year through outpatient department or through telephonic contact. The specified primary end point was death from cardiac cause and the secondary end point was non fatal MI/UA.
Statistical analysis
The statistical analyses were performed using SPSS version 10.0 (SPSS Inc, Chicago Illinois, USA) software package. The qualitative variables were expressed as percentage and compared using the c2 test. Continuous variables were described as mean ± SEM. Difference between means of total leukocyte count and its subtypes in controls and patients of UA, non-STEMI and STEMI were analyzed using the Kruskal-Wallis one-way ANOVA test. The time-to-event analyses were performed using univariate and multivariate backward stepwise conditional Cox regression analysis. Difference was considered statistically significant at a value of p<0.05. 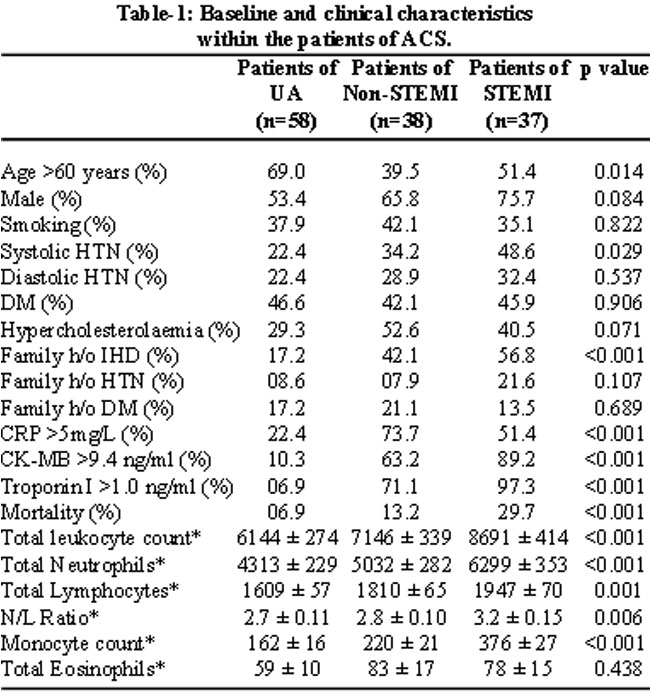 Table-1 predicts comparison of baseline characteristics within the patients of ACS. Systolic HTN, diastolic HTN, family history of IHD, mortality and cardiac biomarkers (CK-MB, Trop I) showed a significant difference and monotonous increase from patients of UA to STEMI. Total and differential leukocyte count within the patients of ACS and controls showed that total count of leukocytes, neutrophils, monocytes and neutrophil-lymphocyte (N/L) ratio were lower in controls, intermediate in patients of UA and non-STEMI, and higher among STEMI patients. The lymphocyte count, on the other hand, was highest in the controls. A significant difference between means of total count of leukocytes, neutrophils, lymphocytes and monocytes, and of N/L ratio was seen in controls and patients of UA, non-STEMI and STEMI.

Our study has demonstrated that total and differential leukocyte count, universally known as low cost, simple tests are probably independent markers for the prediction of risk in patients with ACS. The results are consistent with a number of studies which showed the predictive value of total leukocyte count and its subtypes in patients with coronary artery disease (CAD). 6-8  In the CAPRIE study that compared the effect of clopidogrel with aspirin, showed that neutrophilia was an independent risk marker for cardiovascular disease and mononucleosis for ischaemic stroke. 9
Using time-to-event multivariate backward stepwise Cox regression analysis, our results showed that the increasing monocyte count was the highest predictor of mortality among the leukocyte subtypes, coronary risk factors and the cardiac biomarkers. Our results are in agreement with Afiune et al10 who demonstrated that among all leukocyte subtypes, the increasing monocyte count is the one to be associated with the highest rate of coronary artery disease. Barons et al11 reported a gradual increase in monocytes in comparison between stable CAD and patients of acute myocardial infarction; the increase is probably related to seriousness of atherosclerosis, coronary blood flow and higher mortality in patients with ACS.
Atherosclerotic plaque is indeed characterized by infiltrates of monocytes/macrophages and lymphocytes which have transmigrated from the vascular space into the sub endothelial layers of large and medium sized arteries. The continuing entry, survival and replication of mononuclear cells in atherosclerotic lesions depend in part on factors such as macrophage colony stimulating factor, monocyte chemoattaractant protein-1 (MCP-1), and oxidized LDL. MCP-1 induces recruitment and activation of monocytes, T cells, and natural killer cells to the site of inflammation and the infarcted area, and plays a significant role in the process of myocardial healing and remodeling after occurrence of MI.12,13 The monocytes and the T lymphocytes are linked in such a way that activation of one cell type may lead to activation of other type of cells.14 The activated T cells elaborate secretion of inflammatory cytokines such as g interferon and lymphotoxin that in turn stimulate macrophages, vascular endothelial cells and smooth muscle cells. Null T cells which are capable to injure the vessel directly, are also present in increased number in peripheral blood of patient with ACS.15
When total leukocytes and its subtypes were analyzed by backward stepwise Cox analysis, the neutrophils showed the highest prediction of mortality in patients with ACS. These results are in agreement with Wheeler et al16 who reported that increased neutrophils count predicts greater risk for CAD than other leukocyte subtypes.
It has been long known that AMI is followed by neutrophilia, the early appearance of neutrophil in the infarct zone with heavy infiltration by 1-3 days, followed by infarct healing and replacement fibrosis. Neutrophilia also might indicate maladaptive processes: circulating leukocyte-platelet aggregates appear in acute coronary syndromes and might facilitate vascular plugging and infarct extension. The neutrophils can make plaque disruption by releasing proteolytic enzymes, derivatives of arachidonic acid and superoxide radicals while the reperfusion injury occurring spontaneously or after therapy have been postulated to be leukocyte mediated.17
The cardiovascular risk of elevated WBC count is carried by increased circulating neutrophil count and decreased mononuclear cell count is not intuitively obvious, so a parallel increase in absolute or proportionate mononuclear cell counts at the expense of polymorphonuclear cell count could be postulated.
A significant correlation between the CK-MB levels and the monocyte count was seen in our results on admission. The results are consistent with Hong et al,18 who showed that peak monocyte count recorded during the immediate post infarct period showed a significant correlation with maximum CK levels. He also showed role of monocytes in expansion of infarct and development of heart failure.
It is not clear if monocytosis is a cause or an effect of a large infarct, or infarct expansion that leads to remodeling. On MI occurrence, the infarcted myocardium is injured by ischaemic insult resulting in myocardial cell death i.e. necrosis. In human, myocardial necrosis begins in the sub-endocardium at 30-40 minutes after the onset of coronary occlusion. An increase in fibrinolytic activity may lead to restoration of coronary blood flow resulting in \'reperfusion injury\'.19 A large infarct may enhance cytokines, synthesized and secreted by the monocytes and macrophages, to induce monocyte migration into the infarcted region and may enhance peripheral monocytosis; that is, the increment in the number of monocytes might be the result of a large infarct. Maekawa et al,20 determined the significance of monocytosis in clinical outcome after reperfused MI and showed that patients with heart failure had higher peak monocyte count than without heart failure.
Our result also showed that neutrophil-lymphocyte (N/L) ratio is a better predictor for ACS than leukocyte isolated subtypes. The results are in agreement with Zazula et al,21 who showed that patients admitted with acute chest pain, presented with significantly increased N/L ratio. The increase in N/L ratio might be due to neutrophilia that reflect systemic inflammatory status and as a consequence, a higher cardiovascular risk, and lymphopenia reflect the stress presented by ACS.

The study group was small and the follow up was of only one year, so the results might differ in some respect from large population and coronary risk prone population. The pathological role of elevated WBC in patients with ACS has not been shown, so association may not prove causality.