Objective: To determine clinical indications and one month outcome of Percutaneous Coronary Interventions (PCI) in a tertiary care centre.
Methods: We prospectively conducted a descriptive study on 259 symptomatic coronary artery disease patients, who underwent primary, rescue or elective PCI with stent deployment at the Tabba Heart Institute, from May 2005 to September 2006. The primary objective of the study was to identify - stable angina, unstable angina, Non-ST elevation myocardial infarction (NSTEMI), ST elevation myocardial infarction (STEMI), congestive heart failure (CHF) and cardiogenic shock) and thirty days outcome of PCI in terms of mortality, peri-procedural myocardial infarction, re-infarction and stent thrombosis. This was done according to the standard guidelines of Canadian Cardiovascular Society and New York Heart Association classification. The patients were followed for one month and complications were noted.
Results: The mean age of sample was 54.9 ±10.6 years. The indications were stable angina (32.4%), unstable angina (13.9%), NSTEMI (18.9%), STEMI (35.1%), CHF (5.4%) and cardiogenic shock (1.5%). The outcome was mortality (2.7%), peri-procedure MI (0.4%), re-infarction (3.08%), cardiogenic shock (1.5%) and stent thrombosis (4.3%).
Conclusion: Our clinical indications and outcome are comparable with international findings. Stable angina was a major indication and stent thrombosis was the major complication observed, particularly after primary percutaneous intervention for STEMI (JPMA 60:523; 2010).

Percutaneous Coronary Intervention (PCI), has been one of the major advancements in the field of Cardiology. Andreas Gruentzig first introduced the concept in 1977, as a non-surgical method for Coronary Artery Revascularization.1
The technique involves advancing a balloon tipped catheter into an area of coronary stenosis, inflating the balloon, followed by stent deployment. More than 500,000 procedures are performed in the United States of America yearly and over 100,000 procedures worldwide. If the rate of progression remains constant, until 2010, the projected number of coronary angiographies will be over three million and the number of PCI\'s about 1.5 million, with a stenting rate of almost 100%.2
In 2005, the American College of Cardiology (ACC) and the American Heart Association (AHA) Task Force on Practice Guidelines, published an updated evidence-based recommendations concerning indications for PCI.3,4 The purpose of these guidelines was to help the individual operator formulate an evidence based management strategy for patients with coronary artery disease. Euro Heart Survey Program, evaluated the clinical practice and endorsed existing guidelines as well as identified differences in population profiles, patients management and outcome across Europe.
The survey conducted by Lenten on coronary revascularization of patients evaluated the indications of PCI in patients who had undergone angiography and were discovered with coronary stenosis. The survey revealed 53% of the patients had stable angina; 16% had STEMI and non-ST segment elevation MI and 30% patients had unstable angina. Mortality rates at 30 days and 1 year were zero percent in stable angina and about 4% in other subgroups.5
PCI is generally considered safe. However, serious complications, like on-table death (0.5%-1.4%), peri-procedural MI (8%) and emergency coronary artery bypass (CABG) surgery (0.2%-0.3%) have been reported.3 Study by Fokkema in 2008 showed re-infarction and stent thrombosis were major complications after primary PCI for ST elevation myocardial infarction. A study done in Netherlands also showed re-infarction in 3.4% of the patients.6 Ong in 2005, showed that in the first 30 days after stent implantation, six bare metal stent (BMS) patients and 10 drug eluting stent (DES) patients, developed angiographically proven Stent thrombosis (ST). Stent thrombosis was associated with a high morbidity and mortality.7
PCI is now being more frequently performed in our part of the world, despite the socio-economic hurdles. The burden of coronary artery disease is increasing day by day. After an intense literature search, we did not find any study from our part of the world that has looked at the indications and outcome of PCI, including both, PCI performed for acute coronary syndrome and those performed for chronic CAD. This provided a very strong rationale to initiate a study, looking at the indication and 30 days outcome of PCI in a tertiary care cardiac centre.

A prospective descriptive study was conducted at the Tabba Heart Institute, from May 2007 to September 2008. The ethical approval was granted by the ethical review board of Tabba Heart Institute.
Two hundred and fifty nine (n=259) symptomatic coronary artery disease patients of various ages, and both genders, who underwent primary, rescue or elective PCI with stent deployment (bare metal or drug eluting) were enrolled. Consent was obtained. Patients with complication in a lesion, those who had PCI at other hospitals and all lesions treated with plain old balloon angioplasty (POBA) i.e. advancing a balloon tip catheter to an area of coronary narrowing and inflating the balloon were excluded.
The primary outcome variables of the study, were indications for PCI that included stable angina, further categorized by the CCS (Canadian Cardiovascular Society) classification system as CCS class I, II, III and IV angina, unstable angina, NSTEMI, STEMI, CHF , NYHA (New York Heart Association classification) class and cardiogenic shock. The PCI outcome included were peri-procedure MI, re-infarction, arrhythmia requiring treatment, cardiogenic shock, CVA (cerebrovascular accident) , heart block, cardiac arrest, CHF , renal failure, death, discharge from hospital and stent thrombosis.
Unstable angina / NSTEMI was diagnosed on electrocardiographic (ECG) changes, i.e., ST segment depression or prominent T waves inversion or positive biomarkers of cardiac necrosis (eg, troponin) in the absence of ST segment elevation or both. Stable Angina was diagnosed if there was no substantial change in anginal symptoms over several weeks.
Patients with stable angina were further classified on the basis of severity of symptoms from CCS class I to CCS class IV angina for the purpose of identifying the indications of PCI in each class, which was the objective of the current study. CCS I angina was labeled with ordinary physical activity that did not cause angina (such as walking or climbing stairs). CCS II angina was labeled when angina occurred on slight limitation of ordinary physical activity. CCS III angina was labeled on marked limitation of ordinary physical activity. CCS IV angina was labeled when anginal symptoms were present even at rest.8
STEMI was diagnosed on ECG changes, i.e., new ST elevation, left bundle branch block or coronary thrombus. Cardiogenic shock was labeled as a clinical state of hypo perfusion, characterized by a systolic pressure <80mm Hg and central filling pressure >20 mm Hg or a cardiac index <1.8 liter/minute/m2. Congestive Heart Failure was diagnosed clinically by the presence of either paroxysmal nocturnal dyspnoea (PND) or dyspnoea on exertion due to heart failure or chest X-Ray suggestive of pulmonary congestion.
NYHA Class I was diagnosed on the basis of symptoms of heart failure only at level of exertion that would limit normal individuals. NYHA Class II was diagnosed on symptoms of heart failure on ordinary exertion, that is, daily activities. NYHA Class III was diagnosed on symptoms of heart failure on less than ordinary exertion. NYHA Class IV was diagnosed on the symptoms of heart failure at rest.9 Patients with NYHA III or IV symptoms underwent PCI on the basis of symptoms and objective evidence of ischaemia on non-invasive workup.
Peri-procedural MI was diagnosed as MI associated with PCI documented by at least one of the following: evolutionary ST segment elevation, development of new Q waves in 2 or more contiguous ECG leads, new or presumably new left bundle branch block pattern on the ECG and CK-MB (creatinine kinase- myocardial bond) elevation >3 upper reference limit.
Arrhythmia requiring treatment, i.e., ventricular tachycardia was diagnosed on three or more QRS complexes of ventricular origin at a rate exceeding 100 beats/min.
Heart Block was diagnosed as complete dissociation of the arterial and ventricular electrical activity on surface ECG. Cardiac arrest was determined by the absence of a palpable central pulse, unresponsiveness, and apnoea. Sub-acute stent thrombosis was labeled if there was angiographic vessel occlusion, any new Q-wave MI in an area supplied by the stented vessel and/or unexplained death from a cardiac cause.
Re-infarction was diagnosed when patients developed symptoms like chest pain, acute ST elevation MI, new onset LBBB or positive troponin.
All the selected patients underwent PCI at the cardiac catheterization laboratory by interventional cardiology fellows, under the supervision of consultants with >10 years of experience as interventional cardiologist. All procedures were done through right femoral arterial approach with single wall puncture technique, using 6 French or 7 French guiding catheters as appropriate. The data collected included age, gender, past medical history of hypertension, dyslipidaemia, smoking and diabetes. Final indications and outcome were recorded by cardiology fellows. Patients were then followed up on weekly basis in the out-patient clinics by cardiology fellows for a month, when the final outcome were recorded. Follow-up clinic visits were not missed. Patients who developed any complication during the one month follow-up period, contacted the hospital Emergency Room.
The data was analyzed using the Statistical Package for Social Sciences (SPSS) version 13. Descriptive statistics of different variables of the sample population were computed. Means and standard deviations (SD) were calculated for quantitative variables like age and hospital stay. Qualitative variables like gender, past medical history of dyslipidemia, diabetes, hypertension and smoking, indications of PCI and complications were considered. Frequency of indications and complications were noted as the primary outcome of the study. 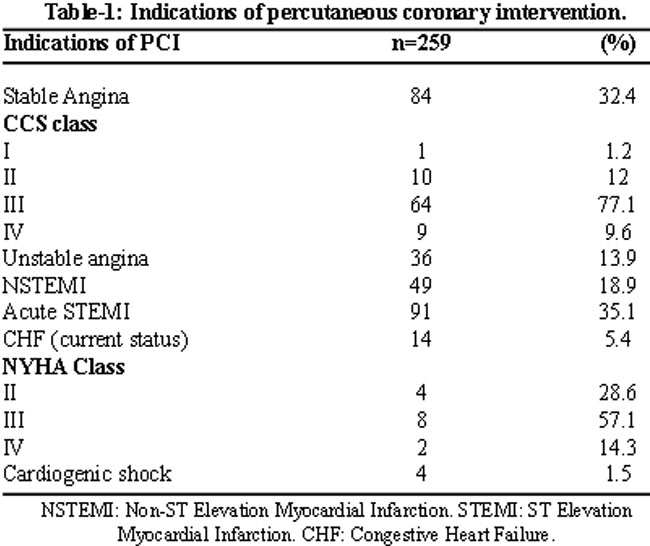 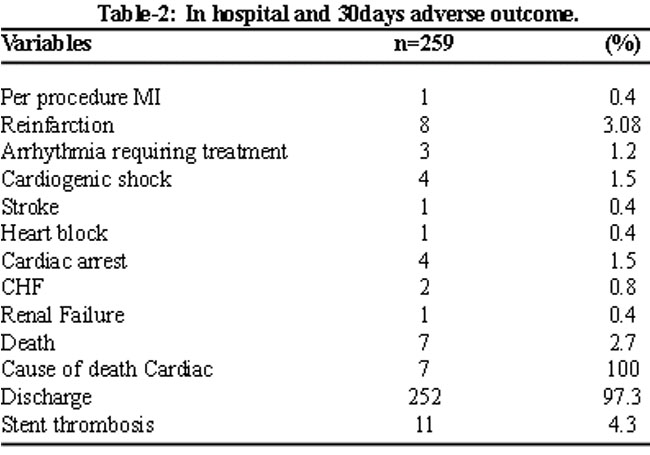 Percutaneous coronary intervention has undergone tremendous growth over the past two decades; partly driven by numerous technological improvements and much for better adjunctive drug regimens. Controversies have existed in the past over the appropriate use (both under use as well as overuse) of PCI in general in the management of coronary artery disease. More specifically, questions have arisen amongst the cardiology community about clinical outcome in certain target groups like the acute MI, women, diabetic patients and the elderly.
Our study represents the analysis of PCI in a tertiary care cardiac center. The data depicts clinical outcome from a "real world" population of consecutive patients, and reflects a more challenging cohort of patients than those included in randomized controlled trials.11-16 Our demographic variables were comparable with data from other PCI registries, such as the Ontario Registry and the Swedish Coronary Angiography and Angioplasty Registry (SCAAR).17
All procedures in our study were successfully completed. In all 368 stents were deployed out of which 42.7% were bare metal stents and 57.3% were drug-eluting stents. Periprocedural myocardial infarction was found in 0.4% of patients, which is significantly less than the International data 8%.3
A high proportion of patients in our study presented with STEMI, i.e., 35%, followed by acute coronary syndrome (NSTEMI & unstable angina) 32.4% and stable CAD 32%. This is comparable with Melbourne Interventional Group (MIG) Registry in which 38% patients underwent PCI for ACS, followed by stable CAD 34% and STEMI 23%.10
Study by Lenzen et al showed 30 days mortality of 1.9% while in our study the 30 days mortality was 2.7%. A slightly lower mortality in Lenzen et al’s study may be secondary to a lower number of patients with STEMI i.e. 16%. An Australian study showed a 30-day re-infarction rate of 2.4%, however in our study it was 3%.
Stent thrombosis is a major complication particularly after primary percutaneous coronary intervention in STEMI. No study was found that has looked for subacute stent thrombosis (SAT) in a heterogeneous group of patients who underwent PCI for ACS and stable CAD. Majority of our patients had primary PCI for STEMI and we found that 2.4% of our patients developed either definite or probable SAT.

Our study represents PCI at a tertiary care centre in our population. We found that indications and outcome in our patients are comparable to international data. The results of our study suggest that favourable outcome with PCI can be achieved in our setting matching with those from international data.