Objective: To assess the usefulness of One Tube Osmotic Fragility Test (OTOFT) for "on the spot" screening of rural families with history of thalassaemia.
Methods: It was an "observational cross-sectional" study conducted at Pathology Department of PNS Shifa Hospital, Karachi and included all available members of three families from the rural district (Badin) in Pakistan with history of at least one child with thalassaemia major. One drop of finger prick blood was added to 5 ml of 0.36% saline in a test tube (diameter 2cm). The results were read after 5-10 minutes by visualizing a written material through the contents of the test tube. In addition, samples were also collected for blood counts, Hb electrophoresis and serum ferritin.
Results: OTOFT was positive in 135/171 (79%) subjects. In the 135 positives, subsequent investigations showed that 61 (45%) had thalassaemia trait, 52 (39%) had iron deficiency and 22 (16%) had neither of the two and were considered false positive. In the 35 OTOFT negative subjects none had thalassaemia trait while only one had iron deficiency (false negative).
Conclusions: OTOFT is a simple and cost effective test which can be used in the field for screening index families with thalassaemia. While a positive test is sensitive for detection of thalassaemia or iron deficiency an OTOFT negative individual may be excluded from further testing for thalassaemia (JPMA 60:521; 2010).

Thalassaemia major is a preventable disorder. This concept has been extensively validated in the Mediterranean where the new birth rate of thalassaemia major has come down to almost zero.1 However, comparable results have not been achieved in any of the developing countries where the disorder is fairly common and poses a significant health problem.2 It is estimated that with a 5% carrier rate, over 5000 infants with thalassaemia major are born every year in Pakistan.3-5
Pakistan has resource constraints, therefore, population screening for carrier identification is a big challenge. The recommended approaches for carrier screening include screening of high school children,6 antenatal screening7 and screening relatives of known carriers.8 A relatively simple approach would be to screen the close relatives of the index cases. The "targeted or inductive screening" can be extremely useful because maximum number of carriers can be found with minimum effort. A recent study in Pakistan showed that screening families with thalassaemia found 20 to 70% carriers.5 Majority of Pakistani population lives in rural areas that are often situated at long distances from the diagnostic facilities. The affected families from such places face difficulties in reporting to the centres at a distance. An "on the spot" screening method like "One Tube Osmotic Fragility Test (OTOFT)" could be used as a potential screening test for thalassaemia. The microcytic red cells in thalassaemia have a low surface area to volume ratio and therefore resist lysis when placed in a hypotonic saline solution. Several studies have proven the utility of this test in thalassaemia screening.9-15 This study was done to assess the usefulness of OTOFT as "on the spot" screening method for screening of thalassaemic families in the rural areas.

All available members of three thalassaemic families from the rural district of Badin with at least one child of thalassaemia major were screened. The elders of each family were counselled, the procedure was explained in detail and consent was obtained. Known cases of thalassaemia major and infants below the age of 6 months were excluded from the study. OTOFT was done by adding one drop of finger prick blood to a test tube with 2cm diameter containing 5 ml of 0.36 % NaCl solution. After initial mixing the tubes were allowed to stand for 5-10 minutes at room temperature. The results were read by placing the tube against written material. In a negative result the solution became clear and written material was clearly visible. In the positive result it was not possible to see printed material through the test tube as the red cells did not lyse (Figure). 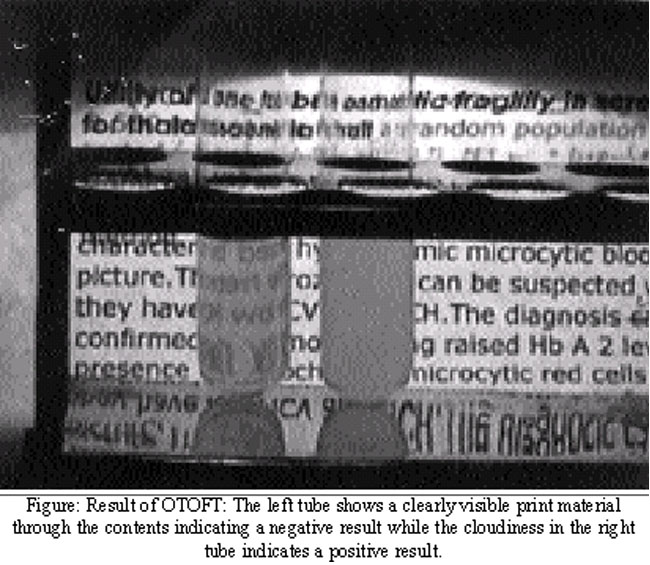 EDTA anticoagulated and clotted blood were collected in separate containers for further testing at the Department of Pathology PNS Shifa Karachi. Full blood counts were determined by automated haematology analyzer. Hb electrophoresis was performed on cellulose acetate at pH 8.9 and Hb A2 quantitation was done by densitometry. Serum ferritin was done by immunometric assay. The individuals with Hb A2 >3.5% were labelled b-thalassaemia trait8 while seum ferritin below 15.0 mg/l indicated iron deficiency.16
Statistics
Statistical Package for Social Sciences (SPSS-10) was used to analyse the data. Relative descriptive statistics, frequency, and/or percentage were computed for all qualitative variables like Sex, Age and OTOFT.

A total of 171 individuals were studied including 52% males and 48% females. The age ranged from 1 to 80 years (mean 20.5 ± 18.4). OTOFT was positive in 79% and negative in 21% of these individuals. Amongst these only one (0.6%) was found to be false negative i.e. OTOFT was negative but the MCV was 75 fl or lower and 35(20%) were true negative. There were 113(66%) true positive and 22(13%) false positive results.
Further investigations including haemoglobin electrophoresis and serum ferritin levels revealed that 61 (45%) of OTOFT positive individuals had thalassaemia trait while 52 (39%) had iron deficiency. There was not even a single case of thalassaemia trait amongst OTOFT negative cases. The results from the three families are summarized in Table.

A fundamental aspect of management in thalassaemia is prevention by carrier screening and pre-natal diagnosis.1,17 The effectiveness of "One Tube Osmotic Fragility Test" (OTOFT) with 0.36% saline solution in thalassaemia carrier screening is described in a number of studies.9-15 Our earlier study has also established a very strong relationship between microcytosis and OTOFT positivity.18
Targeted (inductive) screening, the screening of the relatives of the diseased child, is more efficient considering the scenario in our country.8 The same is confirmed by our study which identified 32% b-thalassaemia carriers against 5% population carrier rate.1,3-5
The most significant finding of this study is the extremely low rate of false negative results, with a very high Negative predictive value18 and there was not even a single b-thalassaemia carrier identified amongst OTOFT negative cases. This all means that when OTOFT is negative the individual can be declared free of thalassaemia trait in an index family with reasonable surety. And if both partners of a couple are found to be OTOFT negative then there is no need of further screening down the tree in their siblings. Thus, the number of individuals requiring further tests is decreased significantly. As a result, only those individuals who are OTOFT positive need to be tested further, in order to assess whether they are suffering from b-thalassaemia trait or iron deficiency anaemia.
Our study has shown that OTOFT is sensitive and specific enough as an initial tool in large scale targeted screening of b-thalassaemia. Majority of the OTOFT positive individuals will either be carriers of thalassaemia or suffering from iron deficiency.
The issue of cost is also very important in large scale screening. The cost of OTOFT as calculated in an earlier study was less than one rupee per test.18

One Tube Osmotic Fragility Test is a cost effective and simple test that can be done in the field without any equipment or expertise. It is very sensitive for the screening of b-thalassaemia carriers. The test has a high negative predictive value and OTOFT negative individuals can safely be declared free of thalassaemia.