The availability of hepatitis B vaccine and its incorporation in the EPI has reduced the frequency of HBV infection in most developed and developing countries. Two kinds of recombinant hepatitis B vaccines are available, one is derived from yeast and the other from CHO cells1. There arc three forms of HBsAg that are expressed in hepatitis B vaccine, namely the major form consisting of S protein alone, the large form containing the pre S-I and pre S-2 components and a middle form containing Pre S2-S components. The presence of these conform to the immunogenicity of the vaccine.
All yeast derived vaccines contain only S antigen protein while CHO cell derived variety contains all three HBsAg forms i.e., the S protein, the pre S-I and pre S-2 antigen making its efficacy better than the other yeast derived or plasma derived vaccines.
The present study was done to see whether low dose hepatitis B vaccination using CHO derived vaccine is able to produce sufficient immunity in Pakistani subjects.

Fifty families residing in a communal compound volunteered for the study. Written consent was taken from and at 7 months to see antibody response.
Any local side effects of the vaccine as soreness, pain and systemic side effects like fever, shivering, headache were noted after each vaccination.
One hundred fifty eight (89 males and 69 females) volunteers with a mean (± SD) age of 25 ± 16 years received 10 mcg dose of Heprovac-B vaccine (Hepatitis B vaccine) intramuscularly in the deltoid region at 0, 1 and 6 months. Of the total there were 54 children and 104 adults. Children were further divided into those aged 2 years to less than 5 years (15 children) and those aged 5-14 years (39 children).
Antibody titers were checked after one month of every dose. Of all 158 subjects vaccinated, antibodies were produced successfully in 96.2% subjects, while 3.8% did not produce antibodies after the third dose (Table 1).

Of all the cases vaccinated _ 10 IU antibodies were produced in 27.2% cases after the first dose, 72.8% after the second dose and 94.9% after the third dose with 5.1% non responders (1.3% producing less than 10 IU and 3.8% not producing antibodies) after the third dose. The geometric mean of antibodies was 26 IU after the first dose, 146 IU after the second and 353 IU after the third dose.Each family head. Blood samples were taken from each individual irrespective of age or gender. Sera were stored at -20° C and checked for anti Hbc IgG using Abbott EIA kit. All those who had history of previous vaccination for hepatitis B and those found positive for anti HBc were excluded from the study. All selected subjects were given 10 micrograms of Heprovac B Vaccine (recombinant CHO cell hepatitis B vaccine manufactured by Institute of Virology of Chinese Academy of Preventive Medicine) intramuscularly in the deltoid region at 0, 1 and 6 months. Blood samples were collected prior to the 2nd and 3rd dose. Antibody levels were divided into 5 categories i.e., levels of less than 10 IU, 10-100 IU, 100-1000 IU, over 1000 IU and no antibodies formed. Antibody levels in the three groups i.e., children under 5 years of age, those between 5-14 years and in adults are shown in Table 2. Antibody production was excellent in both groups of children in whom all showed antibody production by the end of third dose. In adults 5.8% failed to produce antibodies, while low level antibodies (less than 10 IU) were produced in 1.9 % subjects (Table 2). 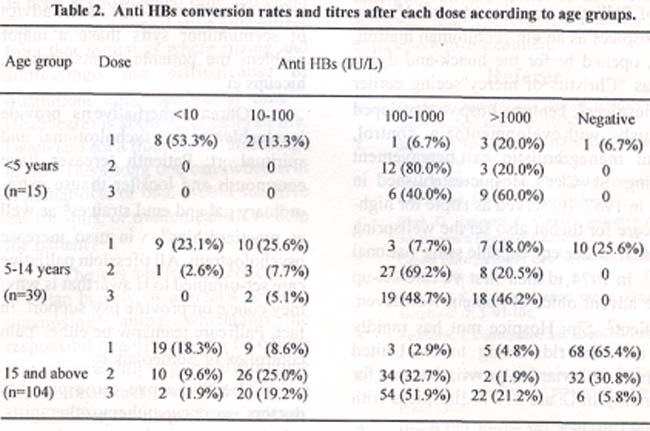 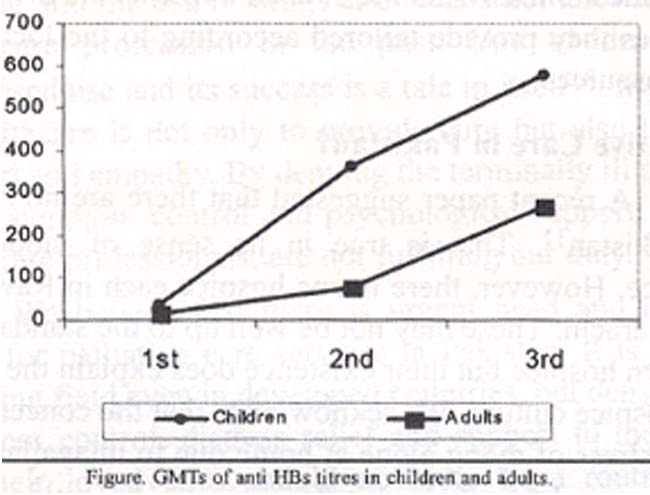 No local or systemic side effects of the vaccine were noted.

In the present study irrespective of the gender 96.2% subjects produced antibodies. This figure is similar to international figures of 94%2• In this study all (100%) children produced high levels antibodies by the end of 3rd dose while 5.8% adults failed to produce antibodies after the third dose. A previous study using a recombinant yeast derived vaccine in a 20 microgram dosage at 0, 1 and 2 months showed a good antibody response in 98% adults3 indicating that antibody response is similar as shown in this study irrespective of the type, dose and schedule of vaccination used. This vaccine is less expensive and equally immunogenic than other locally available HBV vaccines and is therefore affordable for the less privileged class.