Treatnient of infections has become problematic because of increasing global antimicrobial resistance. Antibiotic resistance has risen to alarming proportions in our part of the world. One of the reasons is lack of surveillance studies and lack of local data regarding antibiotic resistance among common respiratory tract pathogens like Streptococcus pneumoniae, Haemophilus influenzae and Moraxella catarrhalis. Publications abroad have proved that there is a growing resistance among these respiratory pathogens1-4.These pathogens are responsible for the majority of community acquired infections, predominantly upper and lower respiratory tract infections. Since most of these infections are of viral etiology5, therefore misuse of antibiotics against them has further contributed in increasing antibiotic resistance.
In our study we report the in vitro suspceptibility results of these commonly isolated respiratory tract pathogens collected in a tertiary care hospital laboratory to several commonly available anti microbial agents.

A total of 970 sputum samples were processed between 1st January to 31st December 2000, out of which 238 respiratory pathogens were isolated. Among these were 51 isolates of Streptococcus pneumoniac, 106 Haemophilus influenzae and 81 Moraxella catarrhalis. Isolates were identified as Haemophilus influenzae, Streptococcus pneurnoniae or Moraxella catarrhalis by standard method6. Antibiotic suspectibility test was done by Kirby Bauer disk diffusion technique7 against following antibiotics:
Ampicillin Amoxicillin-Clavulanic acid, Cefaclor, Trimethoprim Sulfamethoxazole, Ciprollox ac in, Cefuroxine, Cefotaxirne, Penicillin and Erythromycin. 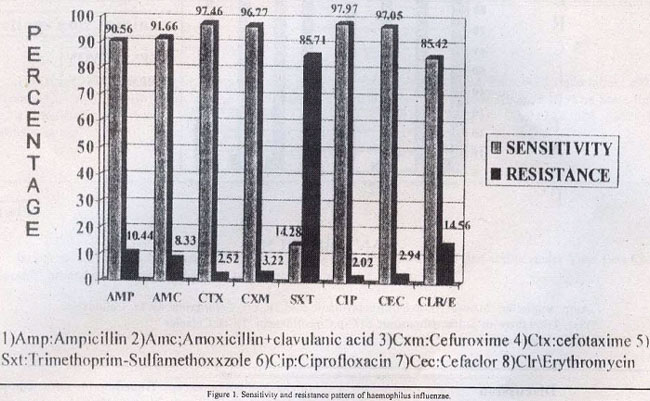 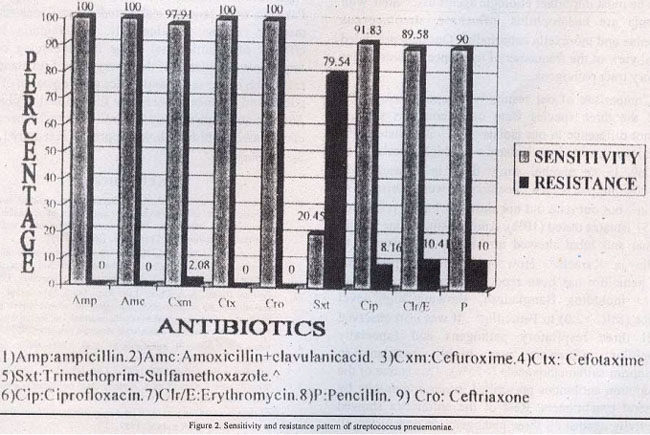 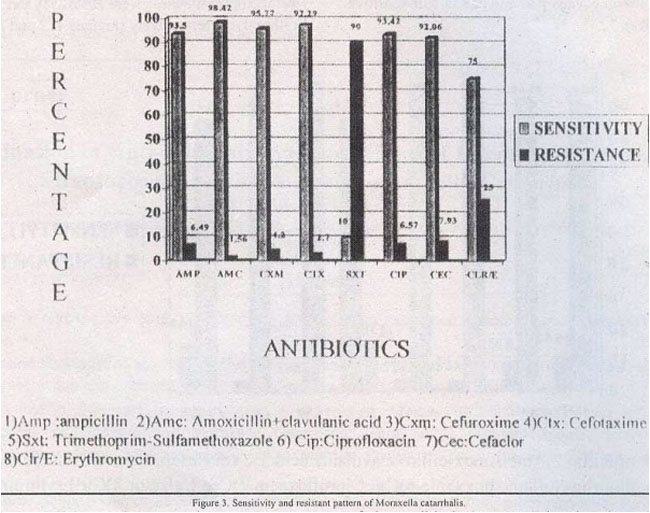 The most important etiologic agents associated with pneumonia are haemophilus influenzae, streptococcus pneumoniae and moraxella catarrhalis8. Our data presented a general view of the frequency of resistance in three major respiratory tract pathogens.
Comparison of our results with reported resistance rates of the three species from other countries showed significant difference in our isolates. In United States 19% Streptococcus pneumonae isolates were highly resistant to Penicillin6. In an another study done in Taiwan, 76% isolates of Streptococcus pneumoniae were resistant to Penicillin2, but our data did not show as high a resistance among 51 isolates tested (10%). Another study done locally by Nighat and lqbal showed no high level resistance to penicillin in Karachi9. However, increased resistance against penicillin has been reported from different Asian countries including Bangladesh, showing high level resistance (MIC >2.0) to Penicillin4. It was also observed that all three respiratory pathogens and especially Haemophilus influenzae was highly resistant to Trirnethoprim sulfamethoxazole (>75%). This is one of the most common antibiotics prescribed in our community by the general practitioners. Rest of the antibiotics showed good activity against all three pathogens. In conclusion all the three respiratory pathogens are highly sensitive to most of the antibiotics except Trimethoprim-su Ifarn eth oxazo Ie. High level Penicillin resistance although not yet seen in Pakistan may require elaborated surveillance studies to monitor resistant continuously. To maintain sustained efficacy of antimicrobial drugs in developing countries, improved surveillance of the emergence of resistance, better regulation of the use of antibiotics and ed9cation of both the public and doctors is necessary for rational antibiotic use. There is no single remedy for antibiotic resistance; rather a coordinated multidisciplinary approach is required to tackle the problem10.