In 1979, Askin and colleagues suggested a distinct clin icopathological entity, characterized by small round blue cell tumor ofthoracopulmonary region (Askin tumor), with varying degrees of neuronal differentiation1. Various designations have been used to describe this tumor, such as: adult neurob lastom a, peripheral neuroblastoma, peripheral neuroepithel iom a, primitive n euroectodermal tumor and Ewing’ s sarcoma family of tumors. Askin tumor is seen in children and adolescents with a 3:I female predominance. It is a highly malignant tumor with a very poor prognosis2. For advances to be made in treating these patients, therapy should be given in a multidisciplinary manner in the context of’ a clinical trial at a major medical centre that has expertise in managing such patients.

A 1 7 year old female presented to the surgical department, Jinnah Postgraduate Medical Center (JPMC), Karachi with an eight month history o. right anterior chest wall mass associated with fever. There was no remarkable past history. Physical examination revealed a 10x10 cm rounded, fixed mass on the right anterior chest wall extending into the supraclavicular region. No other abnormality was detected. A chest x--ray showed opacity in the right apical region. A computed tomographic scan of the chest revealed large lobulated soft tissue density masses in the right upper chest and surrounding the medial end of the right clavicle extending into the root àf the neck and the superior mediastinum. No bony erosion or lung metastasis was seen. Bone scan and other studies revealed no evidence of distant metastasis. Ultrasound guided FNAC revealed highly cellular monomorphic population of small, round to oval blue cells with vesicular nucleus, scant cytoplasm and indistinct cell outlines. For further distinct diagnosis, excision biopsy was performed, which showed a malignant, lobular tumor with characteristic Homer Wright rosettes. No glycogen was seen (Figure 1). 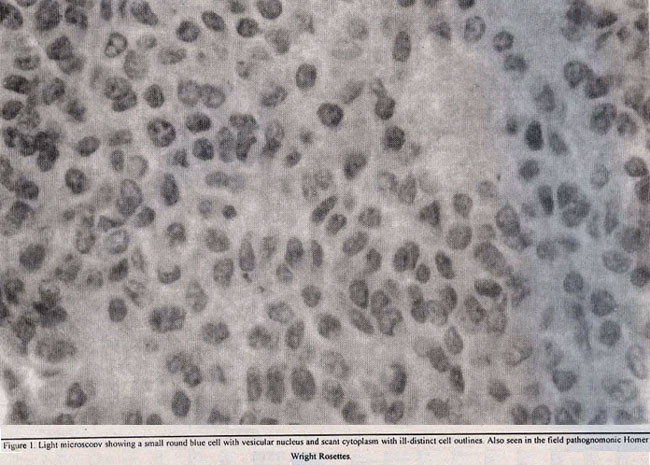 Diagnosis of Askin tumor was made on these results.
Multi drug chemotherapy (four courses of vincristine, doxorubicin, cyclophosphamide and decarbazine) were administered at the oncology department, J.P.M.C, Karachi, in the hope to down grade the tumor but the patient had a progressive disease and the tumor continued to grow rapidly and achieved an enormous size of 25x20x15cm with fluctuating areas, with pointing (Figure 3), 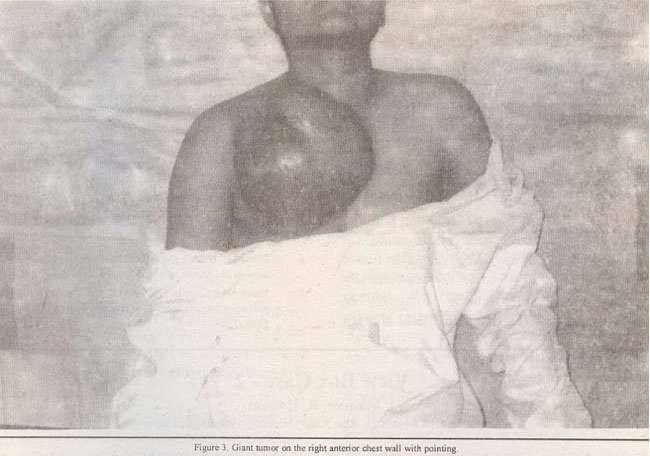 threatening imminent rupture. Therefore, local control, partial excision of the mass was done followed by radiation therapy. 50 Gy of irradiation in divided doses was given over a month at the Karachi Institute of’ Radiotherapy and Nuclear Medicine (KIRAN). Repeat bone scan showed multiple bone metastasis. Brain and liver scans were negative for metastasis. Repeat CT scan showed tumor extension into the axilla but no metastasis to the lung was found. Palliative chemotherapy (two courses of cisplatin, etoposide and bleomycine) were administered, but the tumor progressed and invaded the skin causing multiple skin ulceration and bleeding. The paticnt died of her disease after 18 months of initial diagnosis.
case is the biggest ever reported, especially on the anterior chest wall. Askin tumor is known to have an uncertain histogenesis and can, at times, pose a diagnostic and therapeutic challenge. Light microscopic findings of Askin tumor reveals a lobular pattern characterized by richly cellular, monomorphic population of small round blue cells with vesicular nucleus, having coarse but evenly dispersed chromatin and finely granular quality (the primitive “salt and pepper” nucleus) and the pathognomonic Homer Wright rosettes1,3,4. Among the immunocytochemical markers of neuronal differentiation, chromogranin is more specific than neuron specific enolase. Recently MIC 2 has been used as a marker to identify PNET/Ewing’s sarcoma. It is a pseudoautosomal gene located on the short arm of the X & Y chromosomes, that produces a cell membrane protein, called CD99. Several monoclonal antibodies to CD99 have been identified including 013, HBA17, 12E7. It is >95% sensitive for PNET/Ewing’s sarcoma. However, it is not specific, and .any diagnosis should not rely on this marker.

Primitive neuroectodermal tumor of the thoracopulmonary region probably occurs more commonly than is generally appreciated. It typically involves the soft tissue, periosteum or the extrapulmonary tissue of the thoracic wall, and mav present as a chest x-ray mass in a child with thoracic symptoms or as a paravertebral mass, although it is more common in the posterior rnediastinum2. After review of the available literature, it appears that our alone5. Electron microscopy discloses the ultrastructural features of neuronal element: the dense core neurosecretory granules, the primitive neuritic extensions, cell processes and neurofilaments1,4. Rhabdomyosarcoma, lymphoma, Ewing’s sarcoma and Askin tumor were considered in the differential diagnosis of this case, all of which occur mainly in teenagers. Exclusion of rhabdomyosarcoma was done on the basis of lack of alternating areas of cellularity and myxoid changes, spindling and the characteristic eccentric eosinophilic cytoplasm on light microscopy, the absence of cross striations in the cytoplasm on electron microscopy and negative staining for desmin on irnmunocytochemistry. The negative Pan-B, Pan-T, Leukocyte common antigen (LCA) and the electron microscopic findings excluded lymphoma. Though Ewing’s sarcoma and Askin tumor have remarkable similarities, we could diagnose this as Askin tumor based on the soft tissue parenchymal orientation of this tumor with positive staning for NSE and chromogranin and negative for periodic acid schiff, and the absence of dimorphic light and dark cell pattern and punched out clear cytoplasmic vacuoles.
The chances of recovery and choice of treatment depends upon the location, size, stage (Iocalizedl metastatic/ recurrent), the presence or absence of neural markers, the response to treatment and the general health of the patient. Those with neural markers indicate a more unfavorable course5. Wide en bloc excision is the standard, followed by irradiation and chemotherapy when the resection is incomplete. Alternatively, for late presenting, clinically invasive tumors, like ours, presurgical chemotherapy has shown to effectively down grade the tumors making them resectable and also improving the survival. Most often a combination of vincristine, doxorubicine, cyclophosphamide and actinomycine D has been used. Other agents effective in this disease are cisplatin, etoposide (VP-16), VM-26 and isophosphamide2. Chemotherapy for tumor reduction with subsequent surgery, in the presented case, did not show a response, instead it rapidly progressed to an enormous size. As total excision was not possible so partial excision of the tumor was undertaken; with an intention to decrease the tumor bulk and make it subsequent radio and chemotherapy effective. Askin tumor is radiosensitive, and doses of 45 to 55 Gy are generally given to primary unresectable tumors2. Fifty Gy of irradiation was given from only the anterior field and not from the posterior field as the lung was in the way followed by palliative chemotherapy. Askin tumor has a poor prognosis (mean survival time: 8 months), even with the best treatment options. In 1989, Young et al7 reported an intensified combined modality therapy, including intensive marrow ablative chemotherapy, total body irradiation and autologous bone marrow transplantation, for chest wall sarcomas, such as Askin tumor and Ewing’s sarcoma. Their results were preliminary but high CR rates and good local control with acceptable morbidity were obtained2,7. Clinical trials are being carried out and we hope future could bring us definite and curative treatment for such diseases.

We are thankful to Dr.S.M.Atam for his expert opinion in the diagnosis and Drs. Ahmed Usman, Shahid Kamal and Tariq Mehmood for their help in the management of this case and especially Drs. Sajjad and Naseemuddin for their advice.