Prevalence of Hearing impairment in Sibilings of Deaf Children

Objective:To assess the prevalence of hearing impairment in siblings of children with profound to total hearing impairment.
Method:Two hundred and twenty siblings of children at a deaf school in Karachi completed the screening program. This consisted of a questionnaire and pure tone audiometry.
Results:One out of three (73 siblings) had a threshold of 25 dB or greater in their better ear. In a population, already aware of hearing loss, we note that only fifteen siblings had a previous audiogram.
Although a positive family history is associated with hearing impairment in the siblings, no increase due to consanguineous marriages was noted.
Conclusion:This assessment has underlined the need to increase public awareness of hearing impairment. It has also exp.osed the lack of it in families exposed to the condition (JPMA 52:73,2002).

Unlike the developed world, at present, no formal procedures exist to screen children for hearing impairment in Pakistan. Many studies1-4 have investigated the prevalence of childhood hearing impairment, based on a variety of criteria, in settings throughout the world. For our purposes, the most pertinent data is probably that published by Elahi et al5 and Zakzouk et al6, who used the same criteria to define ‘hearing loss’ as our study. Elahi et al5 found the prevalence of all hearing loss in rural Pakistan to be 7.9%, in a general population setting. Interestingly, Z:ikzouk et al6 faund that children, with hearing impaired siblings, were more likely to have an undiagnosed hearing loss themselves. They quote the prevalence of hearing impairment among those children, with hearing-impaired siblings, to be 24.8%, compared to 7.7% among all children screened, in Saudi Arabia.
The Ear Foundation Pakistan (EFP), a field charity for the hearing impaired, chose to screen the siblings of hearing-impaired children, attending the ABSA (Anjuman­e-Bahbood-e-Samat-e-Atfal) School, Karachi. Having 473 pupils, the charity-funded school caters for severely and profoundly hearing impaired children.

The siblings of the pupils, attending the ABSA School for hearing impaired children, Karachi, were invited to take part in audiometric screening. A questionnaire was presentcd to each sibling, to be answered by the parent/guardian. Questions were intended to elicit the following aspects of their histories: age and sex, birth order in the family, birth weight (<1 500g) and gestational age at birth (<33 weeks) complications during the pregnancy, number and age of siblings, known to be hearing impaired, family history of hearing impairment, consanguinity of parental relationship, whether a previous audiogram had been performed, previous ear infections, history ofjaundice, requiring intervention and, history of meningitis.
Following the questionnaire, pure tone audiometry was performed on siblings old enough to complete the test satisfactorily. Any individual found to have a mean threshold of ~25 dB, over 0.5k, 1k and 2k frequencies in their better ear was classified as hearing impaired.
Hearing loss was further classified into mild (25-44 dB), moderate (45-64 dB), severe (65-94 dB) and profound (>95 dB), as described by Davis7. Only siblings who underwent audiometry have been included in the following results. Analysis was performed using chi-squared statistical evaluation.

Two hundred and forty-eight siblings attended the screening session. Two hundred and twenty underwent pure tone audiometry. 28 (12.7%) children being underage to complete this test satisfactorily. Of those screened, 105 (48%) were male and 11 5 (52%) female. Ages ranged.from 4 to 25 years (mean age of 11) in males and from 4 to 23 years (mean age of 11) in females. Individuals had a family composition of mean 2.4 male siblings and 2.2 female siblings. All individuals had at least one sibling known to be hearing impaired, attending the school. Each had a mean 0.9 male hearing impaired siblings and a mean 0 5 femaIe hearing impaired siblings.
Seventy-three (33.2%) individuals were found to have a hearing loss of >.25 dB, in their better ear.
Distribution between the sexes was insignificant (p=0.74); 36 (34.2%) males and 3,7 (32%) females. The mean age of these children was 11.1 years. 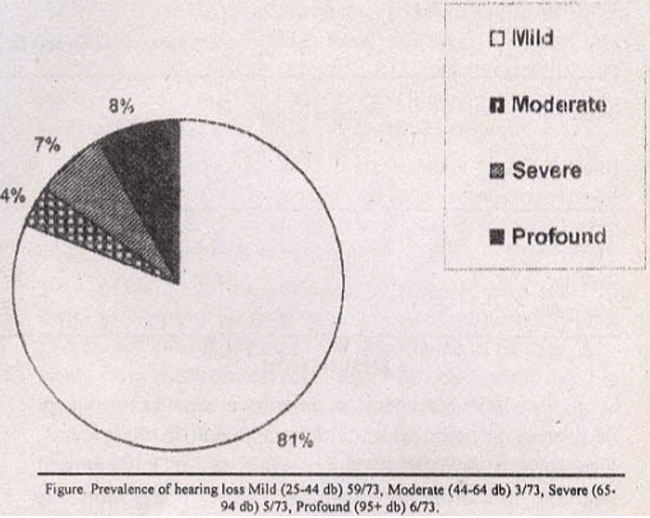 Figure shows the breakdown of hearing loss into the categories of mild, moderate, severe and profound loss.
There was no association between a child’s birth order and their hearing status. Sixty-nine (31.5%) of the siblings were born at home. None were born prematurely. Eleven were born with birth weight <1500 grams. Two of these eleven were identified as being hearing impaired (p=O.58). Complications during pregnancy, other than hypertension (7.2%) were rare.
In all those screened, 140 (63.6%) of parental relationships were consanguineous. Consanguinity had no effect on hearing status in hearing impaired population; 63% (46/73) of hearing impaired individuals compared to 64% (94/147) of normal hearing individuals (p0.89).
Parental deathess was positively stated in only 2 fathers and I mother (different families). The children of the hearing impaired fathers showed no hearing loss, whereas the child of the mother was noted to have a mild hearing loss.
A positive family history of deafness, in relatives other than parents and siblings, was elicited in 18.2% (40/220). A positive family history did appear to be linked to hearing impairment in the screened siblings. Of the siblings found to have a hearing loss, 26% (19/73) had a family history, whereas 14.3% (2 1/147) of normal hearing siblings had a family history of hearing impairment (p=O.O13).
Previous audiograms had been performed in only 15 of the 220 screened children (6.8%). Of those identified as being hearing impaired 137% (10/73) and 3.4% (5/147) of those with normal hearing had a previous audiogram (p=.004).
The results for positive histories of risk factors for hearing impairment; ear infections, jaundice and meningitis, are displayed in Table.

Prostatic Carcinoma with emphasis on Gleason’s Grading: an Institution based Experience

Spectrum of Chronic Liver Disease in a Tertiary Care Hospital