Forty adult ASA III and IV patients scheduled for unilateral lower limb surgery were studied. ASA II! is a patient with severe systemic disease that may or may not be related to the reason for surgery, e.g., uncontrolled diabetes mellitus. ASA IV is a patient with severe systemic disease that, is life threatening with or without surgery, e.g., coronary artery disease. Patients with any absolute contra­indication for regional anesthesia were excluded from the study. After approval from hospital ethical committee, informed consent of patients was taken regarding this modification of spinal anesthesia.
All patients were instructed “nil by mouth” (NPO) after mid night and no pre-medication was given. All had a standard monitoring, including electrocardiogram CM5 lead for ischemic changes and heart rate, non-invasive blood pressure and oxygen saturation. All were measured using the Datex monitor. Invasive monitoring such as CVP and arterial blood pressure was done only if specific indication was present. Intravenous cannula was sited before initiating spinal blockade. The patients were placed in lateral position with the operating side (limb) down on the operating table. The lumbar area was prepared aseptically and draped. The inter-vertebral space L2-L3 or L3-L4 was identified and spinal anaesthesia was performed with 25 gauge sprotte needle. When the intrathecal placement was confirmed, 0.5% hyperbaric bupivacain was injected over a period of 15-20 seconds. The dose was calculated according to patients height (If patient’s height less than 155 cm then 1.1 ml, if height between 155-170 cm then 1.5 ml and if patient’s height was more then 170 cm then total of 1.8 ml of 0.5% hyperbaric bupivacaine). The patients were kept in lateral position with operating limb down for 10 minutes. Sensory block was assessed by using ice packs, bilaterally, at every 5 minutes, for 30 minutes after spinal anaesthesia. Motor block of lower limbs was also assessed bilaterally using bromage scale at baseline and at every five minutes, for 30 minutes after spinal anesthesia. The bromage scale was 0 = no paralysis; 1= inability to raise extended leg; 2= inability to raise flex knec; 3 inability to do dorsiflexion of foot but can wiggle toes and 4 inability to move at all. The patient was asked to raise the extended leg, flex the knee, flex the ankle and was rated 0 - 4. The haemodynamic variables such as blood pressure and heart rate were monitored before spinal anesthesia, just after spinal anaesthesia and then every 5 minutes interval for 30 minutes. If systolic blood pressure decrease by more than 30% of base line or systolIc blood pressure less than 90 mmHg, phenylephrine 100 micro grams in incremental doses with maximum of 1000 microgram was used. Bradycardia, was defined as heart rate less than 50 beats/minute and was treated with atropine 0.5-1 mg given intravenously.
Sedation was provided to all patients with midazolam 1-2 mg intravenously. The duration of surgery, and any complications regarding anaesthesia were also recorded. All patients were shifted to recovery room after surgery. Patients were discharged from recovery room when they were able to move both legs and their haemodynamic status was stable.
The data for haemodynamic variables were analyzed by repeated measure ANOVA using SAS, separately for systolic and diastolic blood pressure and heart rate. The sensory level was quantified as the number of nerves effected below (and including) the specified nerve level. The sensory level data were analysed by repeated measures ANOVA using SAS with two within subject factors “leg” (operated and non-operated) and time. The ordinal character of the bromage scale (measuring the motor block level) was reduced to binary through the continuation ratio method which makes a series of comparison of all lower categories on a scale to the next succeeding one. The correlation among measurements on the same patients were incorporated in the conventional logistic regression model by the addition of a case - specific random error terms in the linear predictor of the logistic function. Analysis was performed on sabre6. 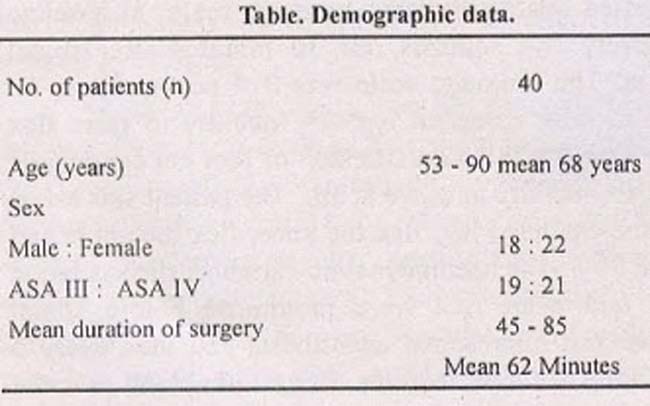 Out of 40, 19 were ASA III and 21 were ASA IV, 10 patients (3 ASA 11! and 7 ASA IV) were excluded because in 3 cases surgery was performed twice (for each patient we could keep only one record because analysis performed was that for a repeated measures design which assumes that measurement on different subjects are independent and it is not appropriate to have the same subject twice). Two patients were on GTN (glyceral trinitrate) infusion which may affect the hypotensive effect of spinal anesthesia 4 patient’s record were discarded because of non-availability of non-operated leg (knee amputated earlier) sensory or bromage scale measurement and 1 was discarded because of recording error in the measurement of motor level.
Level of significance was specified at 0.05. Analysis was performed on records of 30 patients. Results of haemodynamic variables, sensory block and motor block assessment are as follows:
Haemodynamic Variable
At 5 minutes after the initiation of the spinal block a statistically significant drop in the systolic blood pressure from the baseline value was observed , after which there was no significant change until! 30 minutes (Figure 1). 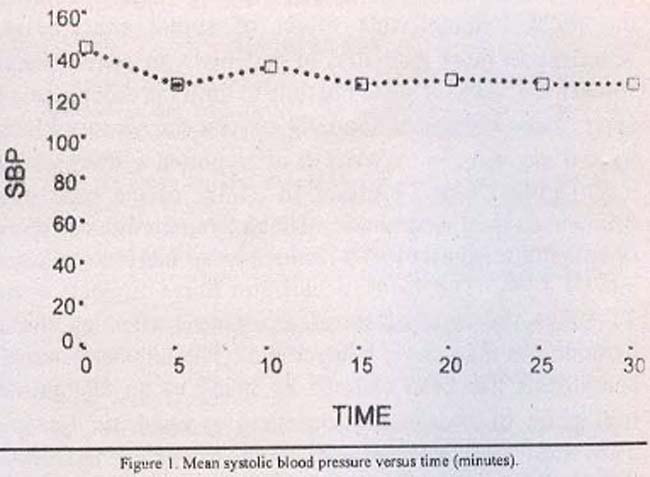 There was a statistically significant decrease (from the baseline value) in diastolic BP at 5 minutes, after that there was no significant change until 30 minutes (Figure 2). 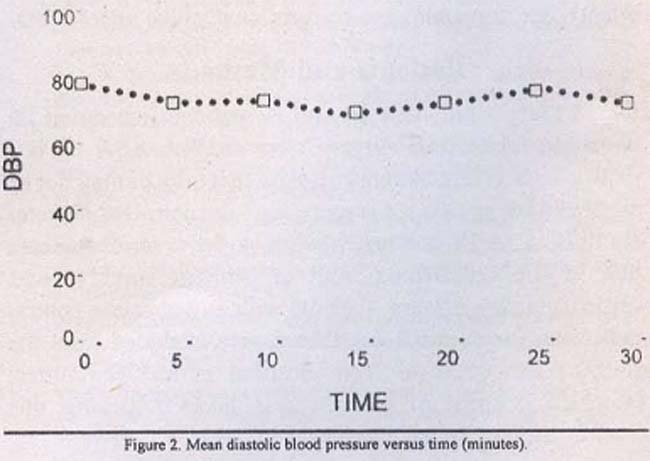 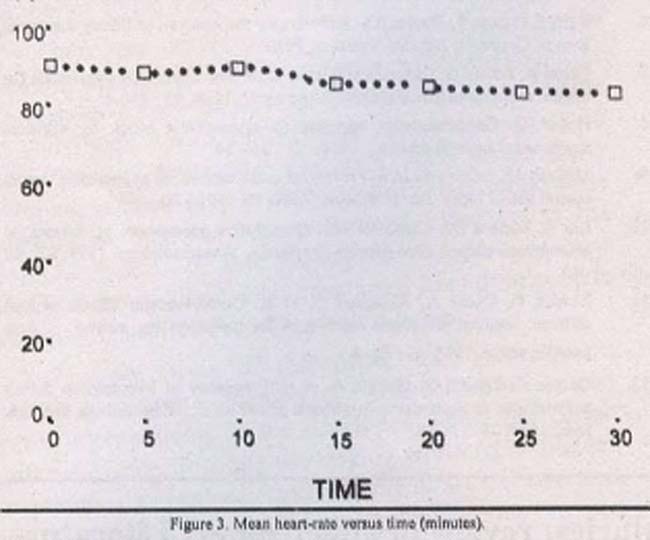 Only 4 patients had transient bradycardia of less than 50 beats / minute but did not require any treatment. Five patients were treated with 200mg of phenyl-ephrine to correct hypotension.
Sensory Block
The results showed that the sensory level block for the operated leg was highest at 10 minutes, after which there was no significant increase until 30 minutes , For the non-operated leg the block increased at 5 minutes ( L3) and then at 15 minutes(L1), after which there was no significant increase, A plot giving sensory level versus time for both the operated and the non-operated leg is illustrated (Figure 4), 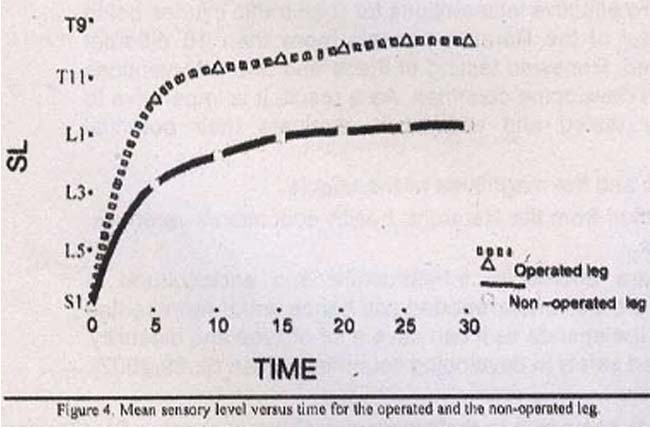 Precipitous arterial hypotension due to high sympathetic block remains a common problem associated with conventional spinal anesthesia, specially in high risk patients. It is accepted widely in current anesthesia practice that by reducing the injected volume, and by using highly concentrated solution of hyperbaric local anesthetic, one can not produce an absolute block without any spilling of the drug on the contra-lateral side. In our institution we have been practicing unilateral spinal anesthesia, by just reducing volume but not increasing concentration, for past few years, with encouraging results, i,e. avoidance of undesirable side effect of sympathetic blood. The volume determination is totally based on patient\'s height, this is easy to calculate as mentioned in methodology section. This study demonstrated that by using 0.5% hyperbaric bupivacaine in reduced volume for unilateral spinal anesthesia does restrict effectively the extent of the sympathetic block, thus preventing the undesired haemodynamic effects in high risk patients, The haemodynamic effects of spinal anesthesia are mainly a result of both the resistance and capacitance vascular changes induced by the block of pre-ganglionic sympathetic libres8,9. In this study we did not consider any direct measurement reflecting the sympathetic activity like thermography, however the use of ice packs for sensory level assessment strictly correlated with the function of C fibers10. In our patients the sensory loss achieved in the operated leg was of much higher level than non-operated leg, some loss of sensation was present in the non-operated leg, though at a much lower level. Similarly assessment of motor block showed some degree of motor block in the non-operated leg again at a lower level of the operated side. It is evident from this study that even when using a small volume of the drug, we can not avoid some spillover effects on the non-operative side, however hyperbaric local anesthetic solution in reduced volume, limits the spread of drug to the non-operated side.
The clinical relevance of these motor and sensory level changes on non-operated leg might be questioned. Haemodynamic changes observed in our patients were very  small and could be ignored, as these changes occurred in the initial 5 minutes, later on patient remained stable haemodynamically. Several studies11,12 have shown the usefulness of unilateral block in ASA I and II patients, however in our study only high risk patients were Included. The expected small hacmodynamic changes in unilateral block may be more relevant in elderly and chronically ill patients and further controlled studies should be performed to evaluate the usefulness of unilateral spinal anesthesia in high risks patients.

I would like to express my gratitude to Miss Zohra A.  Bhimani, Secretary, Department of Anesthesia for typing of the manuscript.

Prostatic Carcinoma with emphasis on Gleason’s Grading: an Institution based Experience

Spectrum of Chronic Liver Disease in a Tertiary Care Hospital