Objective:To provide maximum polio vaccination coverage to under-five (<5) year children of a squatter settlement through Ziauddin Medical University (ZMU) medical students.
Setting: ZMU has established a Primary Health Care Program in a squatter settlement, which is predominantly inhabited by migrants from North Western Province of Pakistan and Afghanistan. The total population is approximately 20,000 and the proportion of <5 year children is nearly 19%.
Methodology: ZMU started Oral Polio Vaccination (OPV) campaigns from 1996; up to 1999. The OPV campaigns were confined to the National Immunization Days (NlDs). A different strategy of “door-to-door” OPV services by medical students was undertaken in 1997. In December 1999 the polio vaccination coverage of <5-year children was evaluated through cluster sampling. This paper describes the steps for improving OPV coverage in Sikanderabad.
Results: The estimated number of <5 year children in the area is 4,600. In a cluster sample survey after the 1999 NID campaign out of 620 under 5 year children living in 429 households. 529 (85%) received OPV, with a 95% Cl for OPV coverage of 82 to 88%. The coverage before the campaigns initiated by ZMU was 52%.
Conclusion: The results indicate that the polio coverage of <5-year children has risen with the change in strategy. Door-to-door coverage strategy with the help of medical students proved effective in providing vaccination. No case of suspected poliomyelitis has been reported from the area since October 1999 (JPMA 53:98;2003).

The World health assembly in 1994 resolved to eradicate poliornyelitis by the year 20001. Keeping this resolution in mind, the South Asian region of WHO in 1994 accelerated the implementation of poiio eradication strategies in 1994)1 Mass polio vaccination campaigns started in Pakistan in April 1994 and are still under way. This is due to the fact that poliomyelitis cases are still being reported from different areas of Pakistan. The goal of the campaign was to eradicate poliomyelitis by the year 2000.
In 1997, 22% (1147) of the total reported cases from all over the world were from Pakistan.2 Out of 418 cases reported from Pakistan in 1998. two hundred and ninety (70%) were from the province of Sindh and of these 69 (16%) were from Karachi and 32 (8%) were from District West of this city. Four (1%) suspected cases were reported from Sikanderabad (District West). In 1999, a total of 218 cases were reported from Pakistan.
Ziauddin Medical University (ZMU) is providing health care services to the squatter settlement of Sikanderabad in district West, Karachi since 1996. Sikanderabad is divided into five blocks3, predominantly inhabited by Pathans from NWFP and Afghans from Afghanistan. The total population of Sikanderabad is approximately 20,000 (males 52%, females 48%), with an under 5-year population of nearly 19%.
The first polio campaign in Sikanderabad was organized in December 1996 and afterwards ZMU participated in all of the National Immunization Days (NIDs)
and Crash Programs with the help of medical students and community volunteers. This paper focuses on the outcome of different strategies to provide effective coverage to under-S year old children in a squatter settlement.

During the NID campaigns of December 1996 and January 1997 a center-based approach was adopted, with provision of services by the medical students of 1st year (number of students 52). One vaccination center was established at the primary Healthcare center at Sikanderabad. Community mobilization was done through corner meetings, distribution of handbills and posters regarding the importance of vaccination against poliomyelitis. In August and September 1997, the University launched a polio vaccination crash program, with the help of students from 1st and 2nd year MBBS, after four suspected cases of poliomyelitis were reported from the area. During the crash program there were four outreach centers with the PHC center as a base. During the NID of December 1997, students of 1st and 2nd year were utilized for the provision of effective vaccination coverage of <5-year children in the community through door-to-door provision of vaccination. In the area OPV is given door to door to children under five years, who were vaccinated by 2 doses of OPV. one month apart, thereby interrupting the chain of wild polio virus as recommended by WHO.4 In this campaign 108 students were utilized along with the faculty members of Community Health Sciences and Family Medicine (CHS and FM) and community volunteers. Eight centers were established in the five blocks of Sikanderabad. One faculty member and 10-12 students were stationed in each outreach center. The students also provided outreach services from the center; a pair of students were allotted 50 houses to cover. Mapping of the area had been done previously and students were provided with the map of the area with their respective households identified.
The coverage of OPV vaccination in the area was evaluated for effectiveness of the programme through a cluster survey in 1999. Weighted samples of households were taken from all five blocks of the area. Eight clusters were selected with 60 houses in each cluster, i.e., a total of 480 houses. Students were divided into 8 groups and allotted 10-12    households per student to conduct the survey. Information was gathered from the mother or other elder of the household regarding polio vaccination coverage of under five year children in the household. Each group of students was supervised by a faculty member of CHS. They contacted the mothers and elders of the households to enquire about the coverage of under 5 children in the polio vaccination campaign.
The clusters were selected keeping in mind the number of students and supervisors. There are approximately 2400 houses in the area. A 20% sample (480 houses) was selected from the five blocks. The houses were systematically arranged from block I to V. considering the cluster size of 60, a skip number of 300 was selected. The first house was randomly selected from house numbers 1-300 of block I and the next cluster was selected after 300 houses till the end of houses in block V. The data was entered in Epi Info v 6.04. The prevalence (coverage) was evaluated in percentages and the 95% confidence interval was estimated for the coverage. 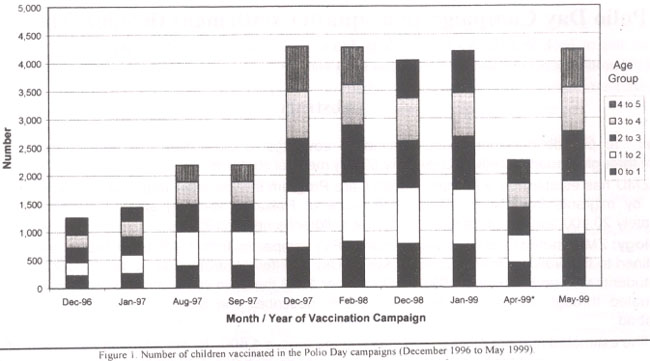 The number of vaccinated <1 year old children has also increased. 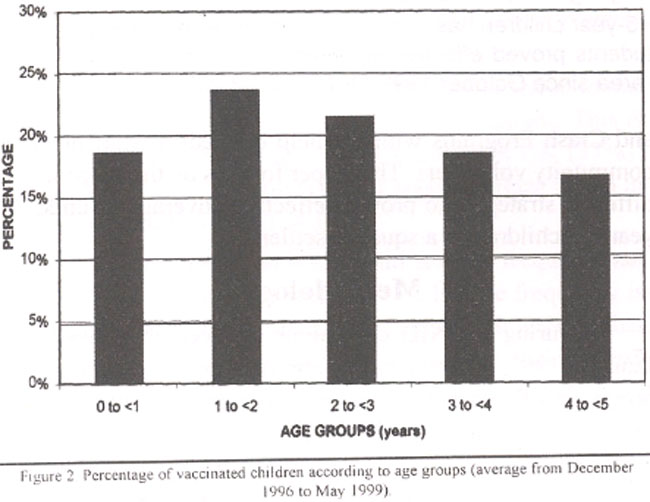 Figure 2 shows the percentage of children vaccinated according to age groups in all campaigns from December 1996 to December 1999. Test of proportion was applied to estimate that is there a difference in number of children vaccinated between center based and door-to-door campaigns (September 1997 and December 1997) with a p­value of <0.001.
The estimated number of<5 year children in the area is 4,600. During the NID campaigns of 1997-99 approximately 80-85% children were given OPV in each of the six days of the campaign. A total of 43,280 doses of OPV were given since 1996 to children <5 years in the area. In the cluster sample survey there were 620, under 5 year in 429 households. Of these 529 (85°/o) had received OPV, with a 95% confidence interval of 82 to 88°/o for the coverage in the area.

The Pan American Health Organization and World Health Assembly have recommended a number of strategies for eradication of poliomyelitis. These include high routine vaccination coverage among under 1-year-old children, sensitive surveillance systems, supplementary doses of OPV to <5-year-old children in NIDs and mopping up vaccination campaigns in high-risk areas. Peru had adopted these strategies and as a result no case of poliomyelitis associated with wild poliovirus has been detected since 1991.5 In India also nearly 2 million health workers and volunteers were utilized to provide vaccination services to <5-year children. These services were center based and alone proved effective in decreasing the number of reported Table. Number of Children Vaccinated in Polio poliomyelitis cases by 79%,6 In East Asian countries like Combodia, Laos and Vietnam mopping up campaigns were used finally in 1996 to interrupt the chain of transmission in areas where wild polio virus persists. The priority areas included those where access to health facilities is difficult, and which have overcrowding, high population mobility, poor sanitation and low routine vaccination coverage. Door to door vaccination coverage strategy was adopted by China and Brazil in 1994 and the results indicate that the polio vaccination coverage of under five year children has risen with the change in strategy)
These experiences by other nations of the world where poliomyelitis incidence was high, were kept in mind during the planning of the polio vaccination campaigns in Sikanderabad. Medical students were involved in the administration of Polio vaccines to the children in the area. The strategy adapted by Ziauddin Medical University proved effective in the provision of vaccination coverage in urban slum of Sikanderabad. This door-to-door strategy has now been adopted in the National Immunization Days all over Pakistan since 1999.
Effective monitoring and surveillance4 indicate that the goal for eradication of poliomyelitis can be achieved, as no case of suspected poliomyelitis has been reported from the area since October 1999. The community has been motivated and sensitized due to the intervention by medical students. In the last NID campaign in November 1999, the community participated in the provision of Polio vaccine to 4294 children, without the assistance of medical students. The community has taken over the responsibility of the polio vaccination campaigns since then with the assistance of DHO Karachi West. ZMU provides technical support and supervision of the NID campaigns. A study was conducted in Baluchistan (Pakistan) to evaluate the risk factors for failure of immunization and effectiveness of mass media and it showed high number of children (93-96%) were Vaccination Campaigns (December 1996 to May 1999).
vaccinated where Televisions and radios were available.7 Another case control study by Karen A. Hennessey revealed high number of poliomyelitis due to the failure of vaccination, vaccine failure and inadequate immunization strategies.8
Based on the experience of the strategies adopted by ZMU we recommend that polio vaccination campaigns should be arranged through the participation of people from the community and community-based organizations of the area. Students from higher secondary schools can be trained and utilized to provide coverage in the areas where accessibility is a problem either due to cultural or language barrier. By adopting these strategies the difficulties regarding manpower and effective coverage can be solved which are a problem during door-to-door vaccination. Coverage of under 1-year-old children for polio vaccination is not up to the desired level in Pakistan. This might be due to the cultural barriers that exist in Pakistan where women in the rural as well as in some urban area are restricted from going out with out the permission of their husbands. NIDs if carried out on week days can improve the vaccination coverage. This is due to the reason that males are present in their homes and can bring their children to the centers. There is also a need of active surveillance for reporting of suspected polio cases, reorientation workshops to encourage reporting of cases of poliomyelitis and immediate action for the diagnosis.9

We are grateful to Professor N.A. Jafarey for his guidance. We appreciate the cooperation and support of District Health Office (District West Karachi) in providing us with the polio vaccine. The cooperation of the members of the Gulshan-e-Sikanderabad Welfare Society and the medical students of Ziauddin Medical University made it possible to carry out these campaigns. We also wish to acknowledge the help of Dr. Mobina Agboatwala for providing us the relevant literature and Benjamin Anthony for mapping the area and mobilizing the community.

Breast Diseases: a histopathological analysis of 3279 Cases at a Tertiary Care Center in Pakistan