Breast Diseases: a histopathological analysis of 3279 Cases at a Tertiary Care Center in Pakistan

Objective: To know the frequency of breast diseases in Pakistani females.
Methods: A retrospective analysis of 3279 breast specimens received over a period of 4 years (1 993-1996) at the department of pathology, the Aga Khan University Hospital.
Results: Out of a total of 3279 breast specimens, common breast lesions included infiltrating duct carcinoma 37%, followed by fibro adenoma 16.95%, fibrocystic change13.96%, mastitis 6.83% and duct ectasia 5.33%. Majority of the cases of infiltrating duct carcinoma were encountered in the 5th and 6th decades of life. Tumour size was 2 or >2 cms. in 93% of cases and 40% of them showed 3 or >3 positive lymph nodes. Grade I tumours were 11.38%, grade 11 59.17% and grade Ill tumours 29.47%. Correlation of grade with lymph node metastases (3 or >3+ve nodes) showed 15 cases (1.53%) of grade 1, 178 cases (18.25%) of grade II and 68(6.97%) cases of grade Ill tumours.
Conclusion: This study shows that in Pakistani females, the most commonly encountered lesion in carcinoma of the breast followed by the benign lesions such as fibro adenoma, fibrocystic disease & others. Breast carcinoma occurs at a younger age group with predominance of high-grade lesions and with frequent lymph node metastasis (JPMA 53:94:2003).

Breast diseases are showing a rising trend worldwide. A number of studies have been done in order to know the magnitude of the problem.1-3 Breast carcinoma ranks first among the malignant tumours affecting females in many pails of the world.3-5 There is a wide variation in the spectrum of breast diseases and the epidemiology of breast carcinoma in various countries or ethnic groups.1,6-91,6-9
In Pakistan, most of the studies on pathological conditions of the breast are related to its malignancies.10-12 Few studies have been done regarding the whole spectrum of breast disease.13 We are presenting the findings of a retrospective analysis of various breast diseases in females from 1993-1996, which was carried out at the Aga Khan University Hospital, Karachi, Pakistan.

The pathology department of the Aga Khan University Hospital caters not only to the population of Karachi city but also receives samples from all over the country through its collection points. The laboratory receives around 25,000 surgical pathology specimens per year. The outside referral cases comprise 60% and the inside hospital cases constitute 40% of the total specimens. In this study the records of all the breast specimens including mastectomy, lumpectomy, needle biopsy and others from admitted patients in the Aga Khan Hospital and outside referrals were included. The outside referral specimens also included cases sent primarily for frozen section, estrogen and progesterone receptors and prognostic markers reporting. A total of 3279 specimens were analyzed over a period of 4 years i.e., from 1993-1996.The specimens were received in 10% buffered formalin and processed in auto processors. Paraffin embedded sections were stained with the routine hematoxyllin and eosin method. Special stains and immunohistochemistry were performed whenever required. Grading was done according to the Modified Bloom and Richardson system.14

During the period of four years i.e., January 1993-December 1996, a total of 3279 breast specimens were received in the department of pathology at the Aga Khan University Hospital, Karachi. There were 775 (23.63%) mastectomy and 1060 (32.32%) lumpectomy specimens. In 1444 (43.36%) cases the specimens were labeled as breast tissue, which included core biopsies, tissue blocks for hormone receptor studies and prognostic markers.
The distribution of breast lesions by mean age at diagnosis is presented in Tables l and 2. Among the various breast diseases, infiltrating duct carcinoma was the most common lesion (37%) followed by fibroadenoma, fibrocystic change, mastitis, duct ectasia and others (Figure 1). 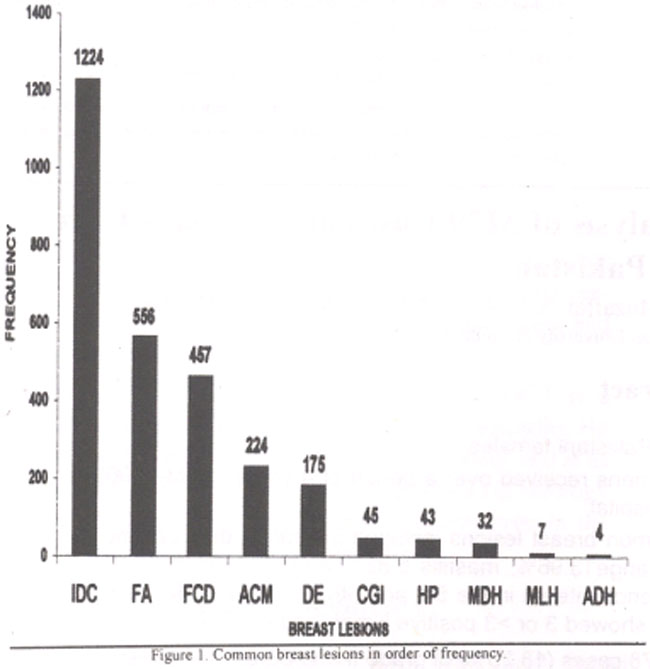 In cases of infiltrating duct carcinoma, the mean age at diagnosis was 49 years and most cases fell in the 5th and 6th decades of life (Figure 2). 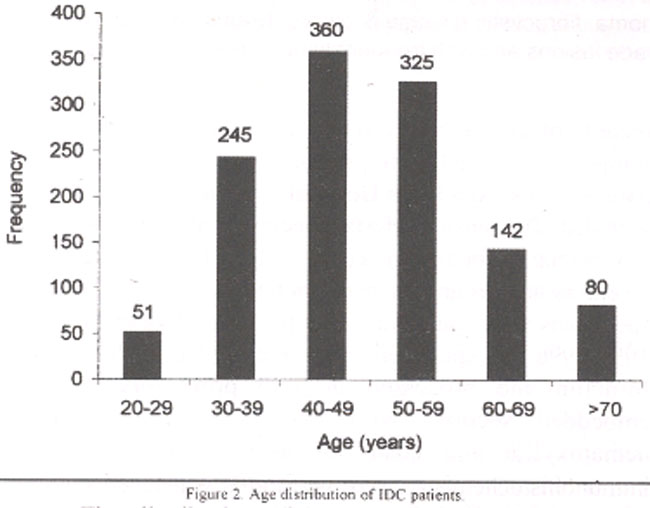 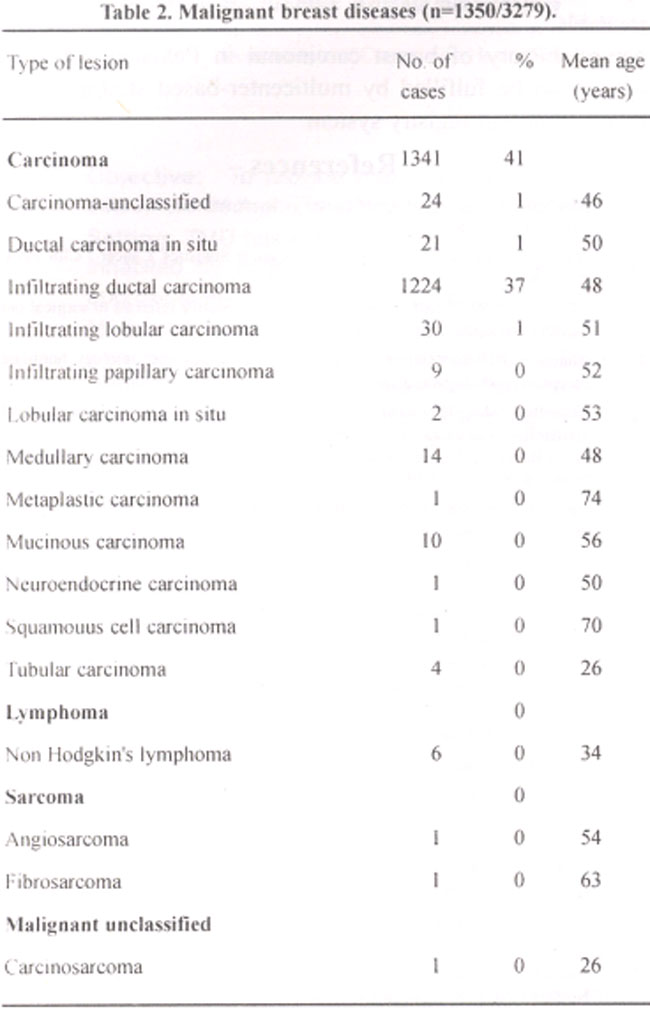 In Pakistan. the data available regarding the distribution of various breast diseases is very limited. The studies done have mainly focused on breast cancer statistics. We have conducted this study in order to gain insight about the overall pattern of breast diseases in our setting.
There are multicenter studies in our country which have revealed that breast carcinoma is the most common malignant tumour among female population and accounts for approximately 25% of all malignant tumours.15,16
In this study, carcinoma of the breast has been reported as the most common lesion among all breast diseases. A retrospective record review of 4575 breast lump cases, at the Fatima Jinnah Medical College, Lahore which was of eight years duration showed a 30% frequency of breast cancer.17 Another study from the Aga Khan University Hospital, Karachi of 500 breast biopsies in one year showed breast cancer accounting for 40%.18 However, in one study of 180 cases conducted at PNS Shifa Karachi. breast carcinoma ranked as the third most common lesion.13 The first two common lesions were fibro adenoma and fibrocystic disease. In this study only the lumpectomy specimens were analysed. In our study various types of breast specimens including mastectomy. lumpectomy and needle core biopsy and frozen sections were included. The other specimens included were those sent only for estrogen and progesterone receptor reporting and for the evaluation of prognostic markers.
The findings of our study are different from the literature of western countries such as the United Kingdom and the United States where among various breast diseases carcinoma is the third most common lesion.3,4 However our findings are consistent with a study from Saudi Arabia.19 In our study the mean age at diagnosis was 49years, which is less as compared to that in the western literature where the mean age is 54 years.20 The other finding in our study is the presentation with an advanced disease which is reflected by the large tumour size of>2cms in 47 1(93%) cases (n- 504). This feature is associated with poor prognosis due to an increase in the number of lymph node metastases.21 Another finding is predominance of high-grade tumours. Grade 11 and III tumours make up the largest group and comprised 88.84% of the cases. These high-grade tumours also show increased number of lymph node metastases.14 These poor prognostic features such as large tumour size, predominance of high-grade lesions and high frequency of nodal metastases had also been reported from the study conducted in Saudi Arabia.19 This retrospective study in Saudi Arab females covers a relatively stable, well defined population in the eastern province over a period of 26 years (1969-1992). In this study a total of 915 breast biopsies and mastectomies retrieved from the files of surgical pathology laboratory, Dhahran Health Center were reviewed.
Fibro adenoma is the second most common lesion constituting 16.95% of all cases and 88% of all benign tumours. This is higher than the reported frequency in England (7.7%)3 and the USA (8.5%)4, but is lower than in Jordan22 and Saudi Arabia.’ In India, fibro adenoma is the most frequent benign lesion of the breast.23 Fibro adenoma is also identified as the most common breast lesion in the study from PNS Shifa, Naval hospital, Karachi where it constituted 25% followed by fibrocystic change 22.5% and carcinoma l8.7%)13 The high frequency of fibroadenoma in Pakistani females is similar to what has been observed in black American24, African25 and Indian females and contrast with the lower frequency in the Western white females. The causes of this increased frequency are not clear. Racial predisposition could be a factor. Demographic factors might play a role, considering the large number of young females within the population of these groups.
Fibrocystic change is the third common lesion in our study comprising 13.96% of the total benign lesions. This is the most common breast lesion in studies from UK (37%)3 and USA (33.9%).14 It comprises the second largest group in study from Saudi Arabia (24.1%).
Mastitis comprised 6.83% and is more frequent than the reported cases in other studies4,21-23 but the frequency is not much different from Saudi Arab females.’ It appears that the figures for breast abscesses are underestimated because most are drained and only a minority is biopsied. Duct ectasia comprised 5.33% of the total cases whereas granulornatous inflammation 1.37%.
In our study atypical ductal hyperplasia comprised 0.12% of the cases, which is much lower as compared to one study from the United States, which shows a frequency of 3.6%.
Findings of our study and from other studies in Pakistan15-18 related to breast cancer are comparable to those available in other Middle Eastern countries such as Saudi Arabia19 and Jordan.22 The similarities shared in these studies with breast cancer include younger age as compared to the western literature3.4 and the presence of several poor prognostic factors including large tumour size and higher frequency of axillary lymph node metastases. This probably reflects delays in presentation of the patient due to social or cultural factors or it could point to a more aggressive tumour occurring iii Pakistani females, especially in view of increased frequency of high-grade carcinomas. These problems can be tackled by the implementation of breast cancer screening program in our country which is required for early detection of this tumour at a stage when it is treatable. Further work is needed to put more light on the natural history of breast carcinoma in Pakistani females, which can be fulfilled by multicenter-based studies and a national tumour registry system.