Objective:To examine whether a circadian variation exists in the onset of symptoms of Acute Myocardial lntarction (AMI) in patients with Coronary Artery Disease (CAD) and to review the characteristics of such variation.
Setting:Patients with AMI admitted to the coronary care units of two teaching hospitals in the city of Karachi, Dr. Ziauddin Medical University Hospital and National Institute of Cardiovascular Disease.
Method: The study population included patients admitted to the coronary care unit. The diagnosis was based on the onset of AMI signs and symptoms and ECG changes. The inclusion criterion was an age less than 76 years.
Results: The incidence of Myocardial infarction assessed by the onset of clinical symptoms exhibited a marked circadian variation. Myocardial infarction occurred 2.8 times more frequently during morning hours (period of maximum incidence) as compared to evening (period of minimum incidence).
Conclusion: This result extends previous observation of the circadian variation in the incidence of AMI onset. This study also helps in searching the potential triggers to physiological changes that may occur during morning hours. Design and timing of cardioprotective medication may play a crucial role in improving circadian variation and prevention of AMI (JPMA 53:84;2003).

Despite recent encouraging declines in the mortality rate in both developed and developing countries, Coronary Artery Disease (CAD) remains a preeminent cause of death and disability. While numerous modifiable and non-modifiable risk factors have been associated with an increase risk of coronary disease. Many studies in the past decade have demonstrated diurnal variation in the onset of acute cardiovascular disorders, such as myocardial ischemia1-3, acute myocardial infarction (AMI)4-8 cardiac arrhythmias9,10 and sudden cardiac death.1-13 These results consistently support the view that there is an increased incidence of acute cardiac events in the morning hours and a low incidence at nights as judged on the basis of cardiac symptoms. The present study also examines that a significant circadian variation exist in the onset of symptoms of Acute Myocardial Infarction in patients with coronary artery disease (CAD). The hypothesis of this study was that more than 50% of the patients with AMI present in the morning hours.

Study Population
This study was based on onset of clinical symptoms and admission to the hospital. The study population included patients admitted to the coronary care units of two teaching hospitals in the city of Karachi, Dr. Ziauddin Medical University Hospital and National Institute of Cardiovascular Disease. The time of the onset was assessed by a semi- structured questionnaire which included specific question on the precise time of onset of the clinical symptoms. Questionnaire was pre-tested and all the participants gave their informed oral consent voluntarily, this criterion excluded the patients from Emergency Department because of their condition. All the consecutive patients who were diagnosed as having acute myocardial infarction and willing to participate, were included in the study. The diagnosis of AMI was made if at least two of the following three predefined criteria were satisfied: a history of chest pain consistent of myocardial ischemia; enzymes elevations of creatinine kinase, its isoenzyme subfraction or lactate dehydrogenase or positively Troponin- T tests and in ECG tracings showing ischemic changes in the “ST segment or presence of any new “Q” wave, typical of AMI.
Statistical Analysis
The computer package ‘Epi-Info version 6” was used for data entry and analysis. To determine whether or not the incidence of myocardial infarction exhibited a systematic circadian variation, the following statistical approaches were prospectively chosen. Test of proportion was used to test the difference between the incidence of AMI in two groups of morning and evening. Statistically significant difference was defined as P value of less than 0.05.

Sixty-nine men and thirty-one women with confirmed AMI were enrolled in the study. The mean age was 55 years ± 15.  The incidence of Myocardial infarction assessed by the onset of clinical symptoms and the time of admission exhibited a marked circadian variation with a peak period during morning hours. (Figure). 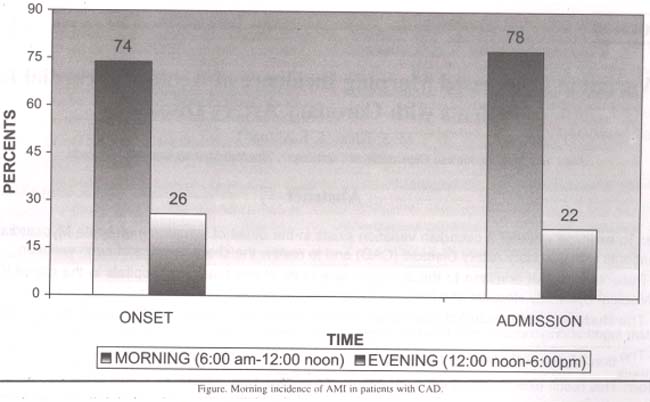 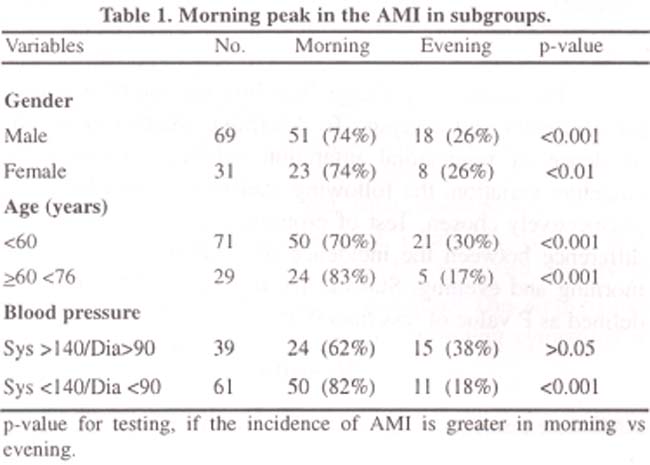 during morning (period of maximum incidence) hours in the early morning hours as compared to evening hours (period of minimum incidence). There were also very few cases of AMI, reported in the subsequent hours but they do not approximate the increased frequency observed during morning hours. The circadian pattern in the incidence of Myocardial infarction was similar among older and young patients and in male and female patients. (Table 1). Tropnin T was found to be the most accurate diagnostic test, detecting about 89% of the cases of acute myocardial infarction. Males had more AMI compared to females. Hypertension was found to be the most common risk factor (47%)(Table 2).

The most common presenting symptoms were retrostemal chest pain (9 1%) followed by dyspnea and others (Table 3). 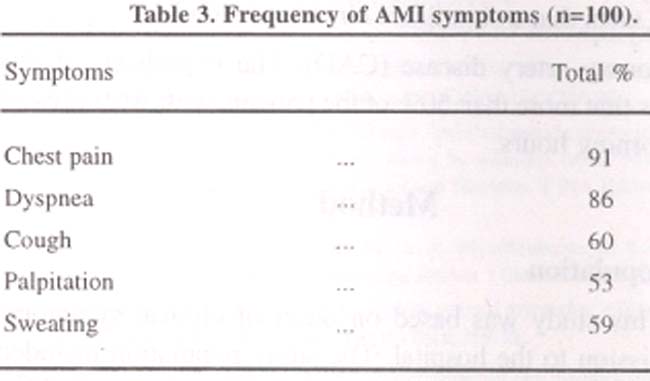 The Myocardial walls, which were more vulnerable to get infarct, are anterior wall (76%) followed by inferior (22%) and posterior walls (2%).

The results of this study suggest an increased incidence of the onset of initial symptoms of AMI in morning hours. (Figure). This morning peak was shown consistently in different subgroups, which indicated that it is a phenomenon not attributable to risk variables alone. There was no indication of further periodicity except for the morning peak. Although a circadian variation in the onset of Myocardial Infarction is pointed out in several previous studies14-16, this study also extends previous observation. The factor responsible for this observation remains elusive for the most part and warrant further investigations. However, there are several clues to the factors responsible for this phenomenon. Platelets aggregation has been reported to be more responsive during morning.17-18 Conceivably, early morning hypercoagulability could*enhance the intracoronary thrombosis and there by increases the risk of major advance cardiac events (MACE).19-21 Another important factor in the pathogenesis of the increased morning incidence of myocardial infarction may be the early morning increase of arterial pressure.22-23 The increased arterial blood pressure, increases the myocardial oxygen demand that leads to the increased vulnerability of the myocardium to ischemia, secondly the increase in arterial blood pressure could enhance the risk of plaque fissure that has been shown to occur rapidly before myocardial infarction.24 Several other factors for e.g. hormonal changes25 or increase in coronary artery tone26,27 may also play a role in the pathogenesis of this phenomenon. It has been proposed that in a number of cases, sudden cardiac death is the result of primary arrhythmic event.28 Such fatal arrhythmias are more likely to occur in the morning since increased activity of the sympathetic nervous system at that time.29 which in turn may increase electrical instability and subsequent conduction defects.30 It has recently been suggested that there is a parallel reduction in incidence of myocardial infarction and sudden cardiac death in patients on aspirin prophylaxis or beta blocker therapy.31.32
The limitation of the present investigation includes its small sample size, lack of enzymatic determination of the onset of AMI, failure to collect information from patients dying soon after hospital admission or too ill to provide informed consent. However this study does provide sufficient baseline data on which further work can be based.

Quiet obvious enough, morning appears to be a time when the “transient risk factors” that lead to sudden cardiac phenomenon are likely to be prominent. The present findings help to narrow the search for the possible cause or causes of the circadian variation in the onset of AMI. It is necessary to further investigate the physiological changes involved to eventually design more effective and preventive therapy and to reduce the incidence of the disorder.
The recommendation that should be emphasized are:
Anti platelet therapy reduces early morning myocardial infarction31, keeping the importance of platelet characteristics in mind. Prevention of blood pressure surge in the morning and limitation of myocardial oxygen demand may be protected by giving beta adrenergic blocking therapy32 and long acting anti ischemic medication perhaps if taken at night provides better protection. From this study it is obvious that, the potential triggering activities such as extreme physical exertion, mental stress and early morning sexual activity should be avoided.33.34 Para-medical staff should be trained accordingly to manage early morning cardiac emergencies.

This study was made possible by the cooperation of the cardiology staffs of the two hospitals; Dr. Ziauddin Medical University Hospital and National Institute of Cardiovascular Disease. This study would never be completed without the sincere efforts and prayers of my family and friends.