Hollow visceral myopathy is a rare clinical entity characterized by impaii’ed intestinal function in the absence of mechanical occlusion. It can affect the smooth muscle of the whole or segments of the gastrointestinal tract (GIT) and occasionally the urinary tract. We are reporting a case of a 5-year-old boy who presented with clinical manifestations of both GIT and urinary tract. To the best of our knowledge, this is the first such case being reported in Pakistan. We also review the current concepts of pathogenesis and management options available.

A 5 year old male child presented in outpatient clinic with complaints of poor stream and constipation since birth. He voided with difficulty in drops , suffered from urinary urgency, frequency and dysuria. There was history of recurrent UTI. He was wet day and night. Constipation was a problem with bowel activity once per week and with difficulty. He was otherwise very active. An identical twin brothel’ also suffered from severe constipation but urinary symptoms were less severe.
Physical examination revealed a large. palpable. non-tender urinary bladder. The right testis was not palpable and rest of examination was non contributory. His investigations showed a serum creatinine of 2.3 mg/dl, urea of 54 mg/dl and normal electrolytes. Ultrasound examination revealed bilateral hydronephrotic kidneys, both ureters dilated and a full bladder not emptying with micturation. An MCUG showed a trabeculated bladder. Vesicoureteric reflux was absent and the posterior urethra was dilated. A provisional diagnosis of posterior urethral valves was made and the child underwent cystoscopy. However. cystoscopic examination of the urethra did not reveal any valves. The urethra was entirely normal and on manual compression of the bladder, he produced an excellent stream. Rectum was loaded with feces and required a washout. Postoperatively the patient was catheterized for 3 weeks to allow his renal function to improve and his serum creatinine did become normal again. He was given laxatives to On removal of his catheter, he returned to his usual pattern of voidtng with slow stream and dribbling and his renal function again started to deteriorate. Intermittent catheterization to empty his bladder was attempted but the child was not co-operative. He underwent an appendicovesicostomy (Mitrofanoff Procedure) to give him a continent, self cathcterizable channel . This allows the child to perform clean intermittent catheterization (CIC) to empty the bladder. During surgery, full thickness biopsy of the caecum was also taken.
Histology of the caecal biopsy showed areas of muscle loss in the muscularis propria which was replaced by fibrous tissue (Figure 1). 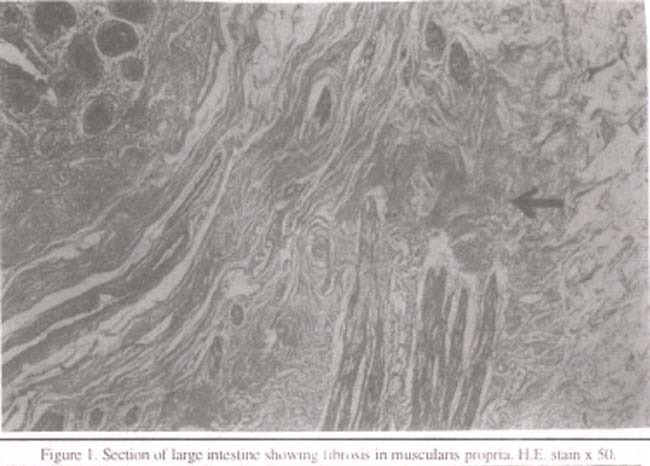 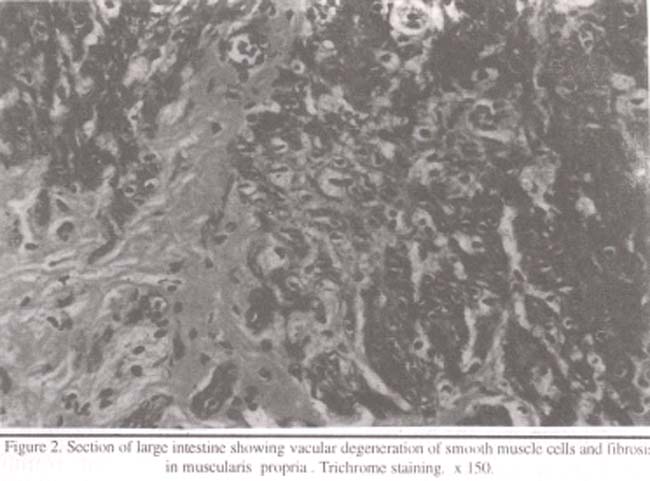 This is consistent with the histopathological diagnosis of Hollow Visceral Myopathy.
Now the child’s renal function remains satisfactory on regular clean intermittent catheterization via the Mitrofanoff channel. He also voids per urethra. His constipation has improved on laxatives but remains a problem from time to time.

Hollow visceral myopathy is a rare clinical entity characterized by impaired intestinal function and motility in the absence of mechanical occlusion.1 It is considered a form of chronic intestinal psuedo-obstruction2 Intestinal psuedo­obstruction encompasses a broad range of disorders and is classified as primary (idiopathic) or secondary when it is due to an underlying disorder. The primary form of the disease may be a result of an inherent defect in the myenteric plexus involving the nerves and ganglia (visceral neuropathy), or degeneration or fibrosis of smooth muscle (visceral myopathy). Disorders affecting the smooth muscle are broadly grouped under the term hollow visceral myopathy. Familial and sporadic forms of the disease have been described.3 Familial visceral myopathy can be transmitted by a dominant or recessive gene.4 This case we are reporting is likely to be a familial form due to his twin brother was also suffering from constipation, but definite tissue diagnosis in the brother is lacking.
The commonest reported manifestation is megaduodenum, but any part or all of the GIT may be involved with or without associated urinary tract lesions.5 No biliaty involvement has been described nor has uterine dysfunction been shown to be a feature. Presenting symptoms may be gastrointestinal, ranging from abdominal pain and bloating to constipation or urological, ranging from recurrent UTI to urinary retention.6 Significant amount of literature has been published regarding gastrointestinal symptoms and their manifestations in hollow visceral myopathy. Literature on urological manifestations and their management remains sparse.7 The first comprehensive paediatric review was reported as the results of a survey by American Society of Paediatric Gastroenterology and Nutrition.8 This showed that urinary retention and UTI were the presenting symptoms in 18% and 13% respectively.
To establish diagnosis, full thickness intestinal biopsy is required.9 Light microscopic studies of small and large intestine show typical features of degeneration , thinning and fibrous replacement of smooth muscle of GIT.9 Myopathy -preferentially involves the external longitudinal layer of muscularis propria characterized by vacuolar degeneration of smooth muscle cells.10
Management requires adequate drainage of bladder. Suprapubic cystostomy or vesicostomy in neonates and clean intermittent catheterization in older children can achieve this. V-Y plasty of baidder neck and posterior wedge resection has been suggested as surgical intervention11 hut Higman et al5 have recommended a conservative approach due to failure of surgery to improve symptoms. Treatment should be conservative8 with clean intermittent catheterization to decrease the frequency of UTI and aid in bladder emptying. An alternative catheterizable channel can be constructed in children who are intolerant to CIC via urethra. Severe constipation not responding to conservative management, requires surgical intervention with Malone Antegrade Colonic Enema or MACE technique. Prognosis for hollow visceral myopathy is poorer in the neonatal period than in childhood or adulthood.7 Gastrointestinal involvement seems to be the limiting factor in prognosis of such children as parentral nutrition with its associated complications may he required from early neonatal period.